About 6.5 million workers are employed in Mexico’s agricultural sector, including 3.5 million self-employed farmers and their family members. There are three million hired workers, including two million employed in Mexican states that produce farm goods primarily for Mexican consumers and a million in states that produce farm goods to export, primarily to the US.

The hired workers employed in Mexican agriculture earned an average 3,200 pesos ($165) a month in 2018. Hired workers in the six Mexican states with the highest shares of exported farm goods, Baja California, Guanajuato, Jalisco, Michoacán, Sinaloa, and Sonora, earned 4,200 pesos a month, while those employed in Mexican states with lower shares of farm exports earned 3,000 pesos a month.

The US imported $26 billion worth of farm goods from Mexico in 2018, including $14 billion worth of fruits and vegetables. US farm exports to Mexico were $19 billion in 2018, meaning that the US has an agricultural trade deficit with Mexico. Mexico supplies about half of the fresh fruit that is imported into the US and three-fourths of fresh vegetable imports.

In December 2014, the Los Angeles Times published articles that asserted Americans were eating the products of child and exploited labor when they consumed fruits and vegetables from Mexico. There were several reactions, including stepped-up government audits of export farms to ensure they were in compliance with labor laws and audits to ensure that farmers register their farm workers for the IMSS and Infonavit benefit programs and paid taxes on their workers’ wages; there was also pressure from US buyers to ensure that Mexican growers were in compliance with labor laws. The Mexican government sharply raised minimum wages in 2019.

We surveyed almost 2,700 hired workers employed on export farms in spring 2019 and found that most earn two to three times Mexico’s minimum wage of 103 pesos ($5.25) a day; fewer than five percent reported earning less than the minimum wage in 2019. Wages on berry farms are 15 percent higher than wages on vegetable farms, men earned about 15 percent than women (45 percent of workers), and workers who speak indigenous languages, a quarter of all workers, earned 10 percent less than other workers except in berries, where they earned the same wages.

The average age of 2,700 workers who were interviewed while working on the largest berry and vegetable farms that export to the US was 32, and these workers had an average 7.2 years of schooling. Their earnings gave their families incomes that were above the poverty line, meaning that the expansion of export agriculture is reducing poverty in Mexico.

One of the most surprising findings of the 2019 worker survey is that over 90 percent of workers on export farms reported that their employers enrolled them in the IMSS health care and pension system; only half of all Mexican workers are enrolled by their employers in IMSS. However, many farm workers reported that they did not have easy access to the services that IMSS should provide to covered workers, especially child care services.

Mexico’s fruit and vegetable exports are rising, and growers are recruiting more internal migrants from poorer areas of Mexico. Many of these migrants are indigenous, which means they have lower levels of education and are poorer: 72 percent of Mexicans who speak an indigenous language are poor, compared to 41 percent of non-indigenous Mexicans. There were no indicators of trafficking, and few examples of workers paying for jobs or being in debt to their employers.

Almost all workers on export-oriented farms are satisfied with their jobs and plan to return to their seasonal jobs next year. Workers report that higher wages and benefit coverage on export farms has spillover effects on friends and relatives employed on farms that produce commodities for Mexicans, forcing farmers producing for the domestic market to raise wages and improve benefits to attract workers. 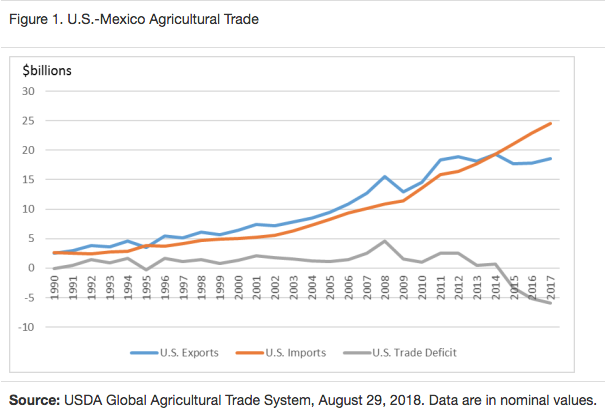 Workers employed on Mexican export farms in spring 2019 earned more than the 3,100 peso minimum wage and 90 percent reported that their employers enrolled them in IMSS, but there was less access to IMSS benefits, especially child care