Mexico’s auto industry expanded rapidly after the 1994 implementation of NAFTA. Mexico was the world’s seventh largest producer of autos and light trucks in 2019, producing over four million vehicles, and the fourth largest exporter, exporting over 80 percent of them.

Mexico’s auto industry employs 800,000 workers, a fifth of the four million workers in manufacturing and double the 400,000 auto workers in 2009 (the US had 830,000 workers employed in auto manufacturing in 2018, including 234,000 in auto assembly plants). Mexico had 22 assembly plants in 2019 and 2,500 auto parts factories. The largest auto cluster is in Aguascalientes, host to eight auto makers that assemble 1.5 million vehicles a year.

The keys to the growth of the Mexican auto industry include free-trade agreements and lower wage labor. Over 80 percent of all Mexican exports go to the US, but Mexico has free-trade agreements with 46 countries, including most Latin American countries and the EU and Japan. One benefit of Mexican FTAs is that it can be cheaper to export cars from Mexico to the EU than from the US to the EU.

The fourth of Mexican auto workers employed in assembly plants have the highest wages, an average $2.30 an hour in 2016-17. Payroll taxes add 30 percent, making labor costs $3 an hour. Three fourths of auto workers are employed in auto parts plants and earn half as much or $1.20 a hour, with labor costs of $1.60 an hour. Labor costs in Mexico are at least $700 per car lower than labor costs per auto in Canada or the US. Mexican labor cost savings offset some of the additional costs of Mexico’s lagging infrastructure.

Mexican auto wages have not increased despite rising productivity over the past decade. One reason is that unions often sign so-called protection agreements with auto firms before plants open that specify wages and wage increases. Newly hired workers must join the union, and union leaders who are often paid by the company have an incentive to minimize worker complaints and protests. The unions at Nissan and VW auto plants are independent of those that belong to the dominant CTM federation, and have achieved higher wages for auto workers.

Under USMCA, the Mexican government reformed its labor laws to allow more independent unions. USMCA’s Chapter 23 deals with labor, and annex 23A commits Mexico to revise its labor laws to guarantee implementation and enforcement of ILO fundamental conventions that protect workers, including allowing workers to form independent unions, to re-negotiate contracts at least every four years, and to approve contracts by majority vote. Mexico create a new Federal Center of Conciliation and Labor Registry to register unions and new Labor Courts that are part of the judiciary to resolve disputes. Most observers expect more independent unions and demands for wage increases in 2020.

Mexico is the 7th largest producer of autos and light trucks, and 4th largest exporter 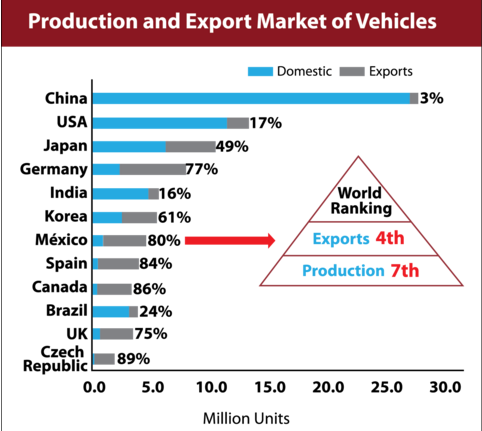 Mexico’s vehicle production is rising to over four million a year, while Canadian production shrinks to less than two million and US production stabilizes at 12 million 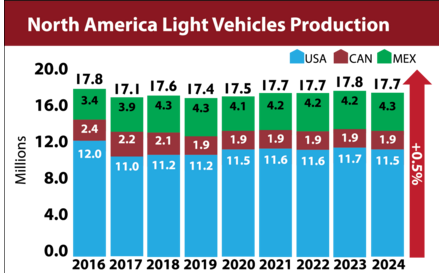