Mexico produces 2.2 million metric tons of avocados a year; most are harvested between October and February. Michoacán has over 70 percent of Mexico’s 235,000 hectares of avocados, and yields average 11 metric tons per hectare. Most avocado farms have five to 10 hectares of trees.

About 1.2 million tons of Mexican avocados are exported; 800,000 tons are consumed domestically. Over 80 percent of Mexican avocado exports go to the US; Michoacán is the only Mexican state allowed to export fresh avocados to the US. US consumption of avocados tripled over the past two decades, to 7.5 pounds per person in 2018, half of Mexico’s 15 pounds per capita consumption.

Uruapan, Michoacán is Mexico’s avocado capital, and a place where criminal gangs levy taxes on farmers of $250 per hectare of avocados for “protection.” Mexico’s war against drug kingpins began in Michoacán in 2006, and one result is that drug cartels splintered into smaller groups that are more likely to extort money from local residents than to smuggle drugs to the US.

Four gangs, the Jalisco Cartel New Generation, the Nueva Familia Michoacana, the Tepalcatepec Cartel, and the Zicuirán Cartel, compete to tax avocado producers. The LA Times interviewed residents who noted that, when the Valencia gang dominated the area, there was peace.

Harvesting avocados in Michoacán pays well, up to $60 a day. However, gangs sometimes interfere with harvesting crews, requiring some to work without pay in orchards they control and preventing crews from working in other orchards to reduce supply and increase prices. Truckloads of avocados en route to packing plants have been hijacked.

Avocado producers and packers in 30,000 resident Tancitaro, Michoacán formed their own police after two major packing plants were burned, and established checkpoints at the entrance to the town. Avocado producers pay a per hectare fee to support the Tancitaro police.

Christian Wagner, Are Mexican avocados the next conflict commodity? December 5, 2019

Over 70 percent of Mexican avocado acreage is in Michoacán

Mexico was the leading avocado exporter in 2018 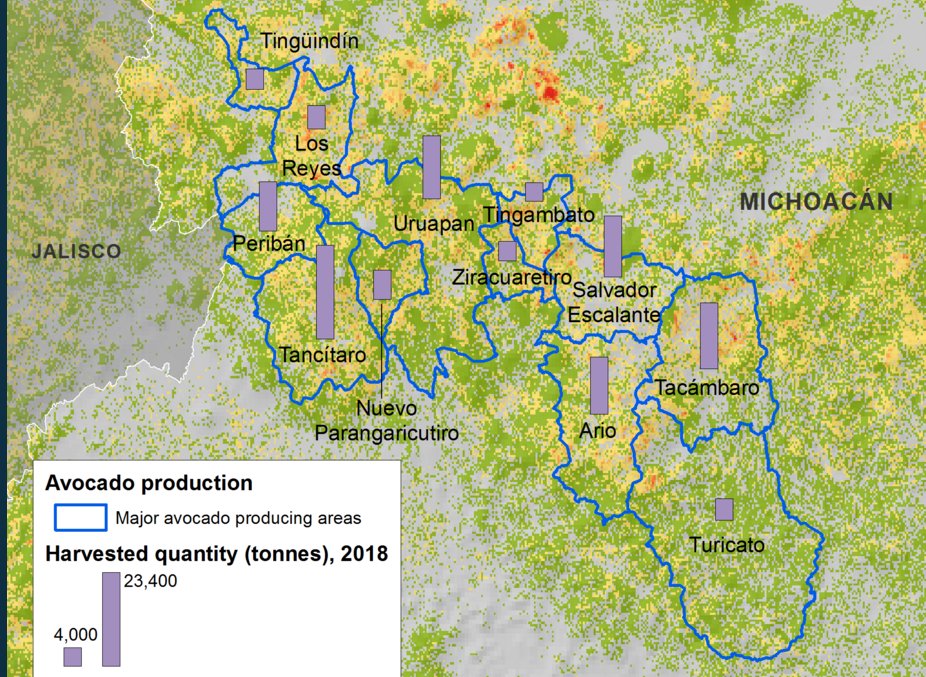