Supporters of AB 1066 argued that farm workers should be treated like other workers, while opponents countered that many farm workers are employed seasonally and want to maximize their hours of work when work is available. Opponents predicted that employers would reduce employee hours of work rather than pay overtime wages.

There are limited data on hours worked in California agriculture. USDA’s Agricultural Labor Survey and the NAWS suggest that most California farm workers are employed between 43 and 45 hours a week. Three types of workers, livestock (dairy) workers, irrigators, and equipment operators, often work more than 40 hours a week, with some regularly exceeding 60 hours.

A Western Growers Association survey of 150 growers in late 2016, after AB 1066 and SB 3 raising the minimum wage to $15 were approved, found that three fourths planned to increase mechanization and a third said they would reduce production of labor-intensive crops. Growers told the WGA that their employees worked an average 9.6 hours a day and 56 hours a week at $12.40 an hour, suggesting 5.5 day work weeks. Instead of paying overtime wages, most growers said they would reduce hours, so that their workers would be employed 16 fewer hours a week and earn $500 a week instead of $700 a week.

Another survey of 100+ mostly male workers who were employed full time pruning table grapes in Kern county and operating equipment in Madera in winter 2020 found that over 80 percent knew that their employers had to pay overtime wages after nine hours a day and 50 hours a week, and over half reported that their hours of work in 2020 had changed because of 9/50 overtime.

For the almost 100 workers who reported working fewer hours in 2020 than in previous years, 40 percent reported spending more time with their families and 40 percent reported spending less money, with less spending on clothing and food the two leading items for cutbacks. Fewer than 15 percent of these workers reported obtaining a second job, and half of the second-job workers were employed five to nine hours a week.

Workers were divided on whether their employers would maintain long work weeks and pay overtime wages: 40 percent said no, 35 percent yes, and 25 percent did not know. When asked about their preferred work weeks, 40 percent wanted overtime pay after eight hours a day and 40 a week, while a quarter preferred more hours of work even with no overtime pay. A third preferred 8/40 work weeks, that is, no extra hours.

Workers were asked who benefitted most from 8/40 overtime, and 40 percent said equipment operators, followed by 20 percent who said packing house workers and a sixth each who said harvest workers and irrigators. Pruners were considered least likely to benefit from 8/40 overtime, perhaps because pruning is done in the winter months and can be stretched out if necessary. Over 80 percent of responding workers had total household incomes of $30,000 or more, suggesting 2,000 hours worked at $15 an hour by one or more workers in the household.

What would the cost of a tax credit system for overtime premium pay be after 8/40 overtime is phased in for large employers in 2022? The Census of Agriculture reported $11 billion in labor expenses in 2017 for directly hired and contract labor. If these labor expenses are divided by average hourly earnings, California crop and livestock workers worked about 860 million hours worked in 2017 or 430,000 year-round equivalent jobs.

Alternatively, in the nonfarm manufacturing sector that is subject to 8/40 overtime, workers average three hours of overtime a week. If overtime hours in California agriculture averaged three a week for half of the year or 26 weeks, workers would work an average 78 hours of overtime a year. If the base wage is $14 and the overtime premium is $7, this means an additional $546 per worker per year and a total $235 million in overtime pay.

Overtime for farm workers on the same basis as nonfarm workers may spread from the current five states including CA that require some type of overtime pay for farm workers to all farm workers if the Fairness for Farm Workers Act introduced by Senator Kamala Harris (D-CA) and Representative Raul Grijalva (D-AZ) is approved by Congress. 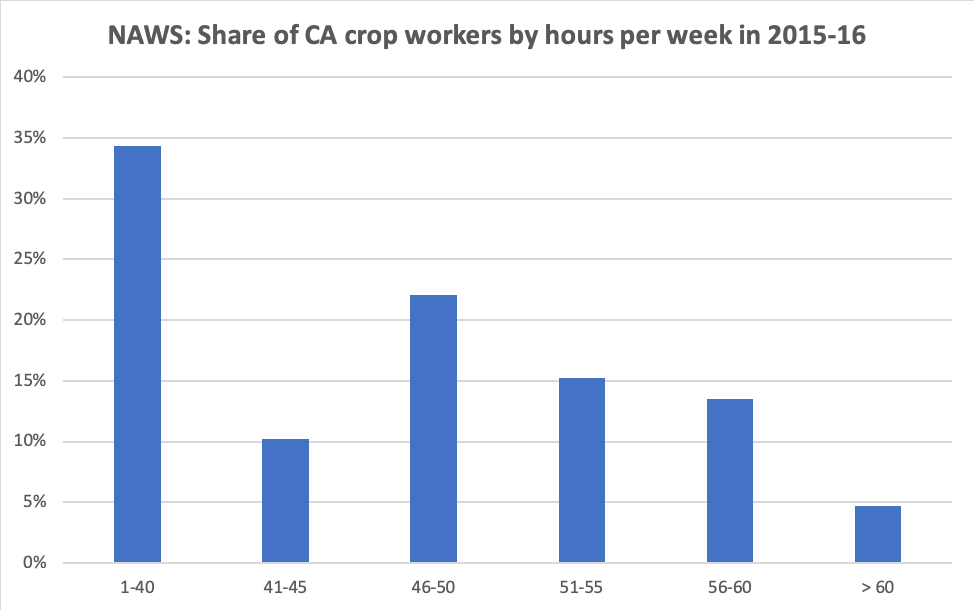