The Families First Coronavirus Response Act (HR 6201) requires private-sector employers with fewer than 500 employees to provide their employees with up to two weeks of fully or partially paid sick leave for COVID-19 related reasons between April 1 and December 31, 2020. DOL, which administers the FFCRA, can exempt employers with fewer than 50 employees if an employer believes that paid leave benefits would jeopardize the viability of the business.

The Family and Medical Leave Act (FMLA) of 1993 requires employers with 50 or more workers to provide up to 12 weeks of unpaid sick leave to employees after the birth of a child, to recover from a serious illness, or to care for someone with a serious illness. Employees must have worked at least 1,250 hours for the employer in the previous 12 months to qualify for this unpaid leave, and can return to their old jobs at the end of the leave.

The FFCRA makes full-time employees who have been employed at least 30 days and are subject to quarantine orders due to COVID-19, who have been advised to self-quarantine by a health care provider, or who are experiencing COVID-19 symptoms and are seeking a diagnosis, eligible for 80 hours of paid sick leave at their regular wage, up to $511 a day or $5,110 in total. No waiting period is required, and H-2A farm workers are eligible as well as authorized and unauthorized workers.

Employees are eligible for two-thirds of their regular pay, up to $200 a day or $2,000 total, if they cannot work because they must care for someone with COVID-19 or a child under 18 whose child care facility or school is closed due to COVID-19. Part-time employees are eligible for the number of hours of paid sick leave that they would normally work in a two-week period.

The FMLA requires certain employers with 50 or more workers to provide up to 12 weeks of unpaid leave for specified family and medical reasons, including the birth of a child or to care for a family member with a serious health condition, with the right to return to the employee’s previous job at the end of the leave. Workers employed by firms with less than 500 employees may use their 12 weeks of FMLA leave for COVID-19 concerns.

The FFCRA expands FMLA coverage by requiring employers to pay eligible employees two-thirds of their regular pay, up to $200 per day with a maximum benefit of $10,000. DOL may exempt employers with fewer than 50 employees if these leave requirements would jeopardize the viability of the business.

Eligible employees must have been employed for at least 30 days prior to requesting the leave, and must show that they cannot work because they have to care for their child due to the closure of a child care facility or K-12 school, or because a child care provider is unavailable due to coronavirus concerns.

How many farm employers and farm workers will be affected by FFCRA paid leave requirements? The FFCRA requires employers to determine their employment at the time an employee requests paid leave, counting both full- and part-time employees and employees brought to farms by labor contractors.

USDA’s Agricultural Labor Survey reports on hired workers who are employed directly by farmers. In July 2019, when the total number of hired workers was 802,000, some 63 percent were hired by employers with 50 or fewer workers.

The Quarterly Census of Employment and Wages (QCEW) collects data on directly hired workers and workers brought to farms by nonfarm employers such as labor contractors, but covers only three-fourths of the estimated average employment in US agriculture of 1.7 million. Smaller farm employers and H-2A workers in some states are exempt from state UI taxes and employment reporting.

The QCEW reports employers by their number of employees, but only for the US and for the payroll period that includes the 12th of the month for January, February, and March, when employment in crop agriculture is near the low for the year except in Arizona and Florida.

These UI data suggest that almost all agricultural employers, and almost 90 percent of UI-covered farm workers, could be covered by FFRCA’s paid-leave provisions.

The Secretary of Labor may exempt employers with fewer than 50 employees from the paid leave requirements to care for children if paid leave would “jeopardize the viability of the business as a going concern.” The FFRCA instructed DOL to consider whether providing paid leave to a worker to care for family members would “cause the small business to cease operating,” pose “a substantial risk” to the company, or leave the business with too few “able, willing and qualified” workers to fill in for the person seeking leave. 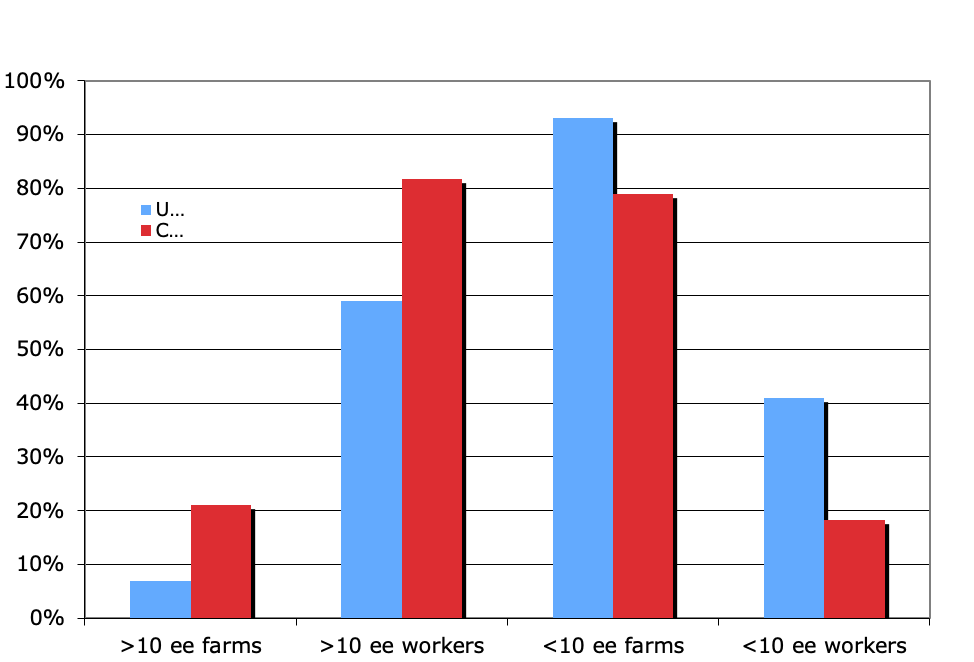 US agricultural establishments with less than 50 employees in March 2018 hired two-thirds of the 1.1 million US farm workers 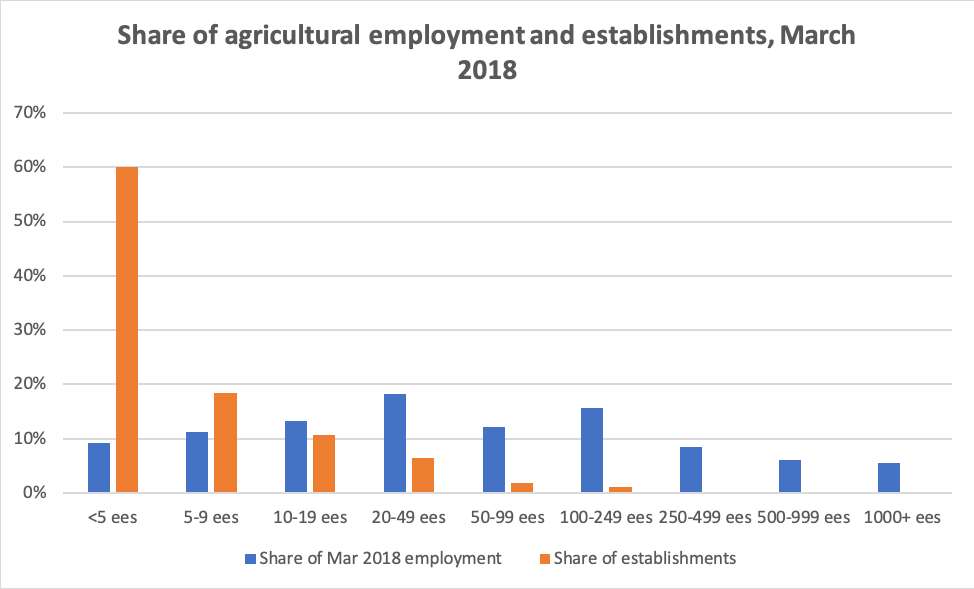 Some 106,000 US agricultural establishments hired 1.1 million workers during the payroll period that includes March 12, 2018