Sinaloa produces 30 percent of Mexico’s tomatoes, but yields are highest in the protected culture of Puebla

Most of the imported tomatoes grown in greenhouses are from Mexico, supplemented by greenhouse tomatoes from Canada.

Most US greenhouse tomato imports are from Mexico 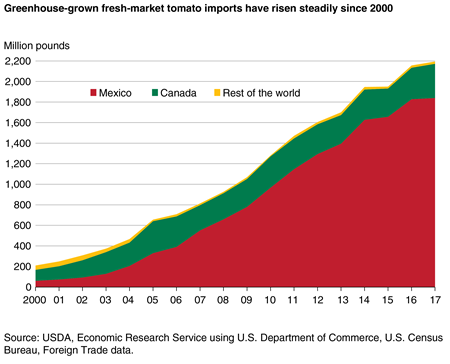 Michoacán produces three fourths of Mexico’s average two million metric tons of avocados each year, obtaining an average yield of 11 tons a hectare. Avocado production is expanding fastest in Jalisco, which produces a fifth of Mexico’s avocados and obtains slightly higher yields. Michoacán is the only state allowed to export fresh Hass avocados to the US.

Production of labor-intensive commodities in Mexico for local consumption and exports is expected to increase. The use of protective culture farming reduces water use and raises yields and, combined with farm labor costs that are a tenth of US farm labor costs, makes Mexican produce competitive with US production.

Mexico’s major comparative advantage remains climate, the ability to produce fresh fruits and vegetables when US farmers except in Florida are not producing. Commodities such as avocados are produced year round, and protective culture is allowing Mexican farmers to extend their production and export seasons.