The year 1965 was a “time of transition” in farm labor as farmers who had relied on Mexican Braceros hired more US workers. The US admitted 4.5 million Braceros between 1942 and 1964. Since many returned year-after year, perhaps two million Mexicans were employed on US farms over 22 years. Bracero admissions were less than half of their peak 1956 levels in 1964. 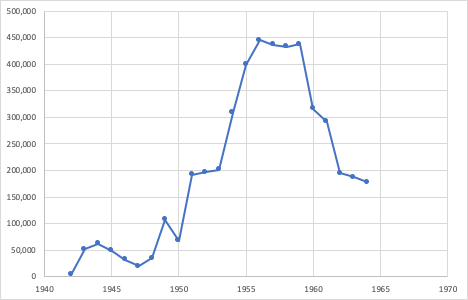 Hawley (1966, 175) quotes Secretary of Labor Willard Wirtz, who said “getting rid of the Bracero program [was] one of the most important social and economic developments” of the 1960s. After the Bracero program ended in 1964, Wirtz wanted farmers to raise wages and improve working conditions to attract US workers, while farmers wanted to hire Mexican workers under the then very small H-2 guest worker program. Wirtz made hiring H-2 workers more difficult by requiring farmers to offer the US workers they must to try to recruit before receiving certification to employ H-2 workers the Adverse Effect Wage Rate, which in 1965 ranged from $1.15 an hour in Arkansas to $1.40 in California.

There were anecdotal reports of more housewives and students entering the California farm workforce as the Bracero program shrank in the early 1960s. Fuller reported that 571,000 workers were employed in California agriculture in 1964, when average annual employment was 190,000, a ratio of three workers per full-time equivalent job. However, only 102,000 of the 571,000 workers had farm earnings in all four quarters of 1964, and 90 percent of four-quarter workers were men. Fuller’s Table 5 shows that the male workers with farm work in all four quarters of 1964 earned a median $3,181 ($26,453 in 2020).

Table E shows that over 80 percent of primary workers had farm earnings in only one area of California, 14 percent in two, and four percent in three areas.

Table J shows that 22 percent of farm workers found their last three farm jobs via friends and relatives, and another 22 percent contacted growers directly, followed by a seventh who found jobs via contractors or crew leaders.

Table M shows that 46 percent of primary farm workers were Mexican (including Mexican Americans) and 44 percent were Anglos, followed by Blacks and Filipinos, who were each three percent of primary farm workers. Filipinos had the highest median earnings of $2,375, followed by Mexicans, $1,470 and Anglos, $1,295. Anglos were grouped at the extremes of the earnings distribution, with a quarter earning less than $500 (many low earning Anglos were students) and 12 percent earning more than $5,000.

Mexicans and Anglos were 90 percent of 1965 primary farm workers

15% of primary farm workers were high school graduates in 1965

The report concluded that there was “chronic unemployment, even among workers firmly attached to the labor force, [that] keeps median annual earnings low and may reduce the attraction of farm work.” (p32). Almost half of the workers were in the labor force all of 1965, but only a seventh had 50 or more weeks of work in 1965. The report attributed chronic unemployment to the “primitive organization of the farm labor market” and the lack of education of farm workers.

The study also examined California’s 145,100 migrant farm workers in 1965; they were 30 percent of $100 or more farm workers. Mexicans were 55 percent of migrants, higher than their 46 percent share of the state’s farm workers. Table A shows that migrants had median earnings of $1,624, more than twice the median $763 of all farm workers.

Filipino migrants had the highest median earnings of $2,328 in 1965

The report included special sections on Mexicans and students in the 1965 farm workforce, and a section on social insurance and welfare as income supplements for farm workers and their families. Table A shows that family incomes for workers with farm earnings of $100 or more in 1965 were $3,444 ($28,186 in 2020).

Farm employers provided housing for 20 percent of the year-round farm workers and temporary housing for half of the migrant workers they employed.

Agricultural economist Varden Fuller reviewed California's farm labor history and concluded that political decisions shaped the size, characteristics, and wages of hired farm workers. Lack of education and few nonfarm job opportunities encouraged US farm workers to adjust to seasonality, accepting seasonal farm jobs in order to have some earnings rather than be jobless and have no income. Poverty and low wages abroad made immigrants and guest workers eager to work in California agriculture.

Fuller concluded that there were several effects of the political decisions that created an excess supply of farm workers. First, with farm wages half of nonfarm levels, farm workers and their children learned that climbing the economic ladder meant getting out of agriculture, leading to treadmill-style labor market that relied on a continuous influx of new farm workers who had few other US job options to replace exiting workers and fill new jobs being created.

Second, low farm wages were capitalized into higher land prices, benefitting large landowners who could produce labor-intensive commodities in California, ship them long distances, and be competitive with local produce. Third, armies of seasonal farm workers discouraged family farmers who relied on their own labor from producing fruits and vegetables, since the value of the time that farm families spent doing work that was done on other farms by hired workers was the same as the low wages paid to these workers.

Assembly Committee on Agriculture. 1969. The California farm labor force: a profile in 1965.