Covid-19 and Farm Labor after 6 Months

The March-April 2020 lockdowns aimed at slowing the spread of the Covid-19 virus exempted essential food system and health care workers, so that farm, food processing, transportation, and supermarket workers continued to work while many other workers were laid off or worked remotely. There were predictions of farm labor shortages due to farm workers who had limited access to social safety net programs going to work while sick and spreading covid in often crowded housing.

After six months, there appear to be three major lessons from Covid-19 and farm workers: relatively few covid-linked farm labor shortages in 2020, an expanding H-2A program, and an acceleration of farm labor changes that were underway before the pandemic.

First, despite expectations of farm labor shortages, there were few such reports in summer 2020. US shipments of fresh vegetables were up one percent in the first nine months of 2020 compared with the same period of 2019, while fresh fruit shipments were down six percent. Since workers pick pounds and tons of fruits and vegetables, the amount of work to be done in 2020 was similar to the amount done in 2019.

The share of positive covid tests was higher-than-average in counties with larger agricultural sectors and a higher share of Hispanics in their population. Hispanics tested positive for covid at higher rates than other racial and ethnic groups, fueling a perception that farm workers were more likely to catch and spread covid. Many of the covid cases detected in agricultural areas involved older residents of multigenerational households that included farm workers, nonfarm workers, and ex-farm workers.

However, most media reports failed to distinguish between farm and nonfarm workers. Some suggested that most farm workers are follow-the-crop migrants who spread covid as they travel, even though less than five percent of US crop workers have two farm jobs at least 75 miles apart.

California farm workers grappled with issues that ranged from high housing costs to poor quality air from wildfire smoke in 2020, but there were more reports of reduced worker hours due to larger crews than of employers complaining of too few workers.

A quarter of the farm employers responding to a summer 2020 California Farm Bureau Federation survey reported that work days were lost on their farms due to covid-related employee absences. Over 85 percent of these lost-work-days respondents reported fewer than 60 workdays lost, equivalent to 10-six day weeks. Labor expenditure data from the Census of Agriculture suggests that 856 million hours were worked in California agriculture in 2017, equivalent to 107 million eight-hour days, making days lost due to covid a tiny fraction of days worked in California agriculture. 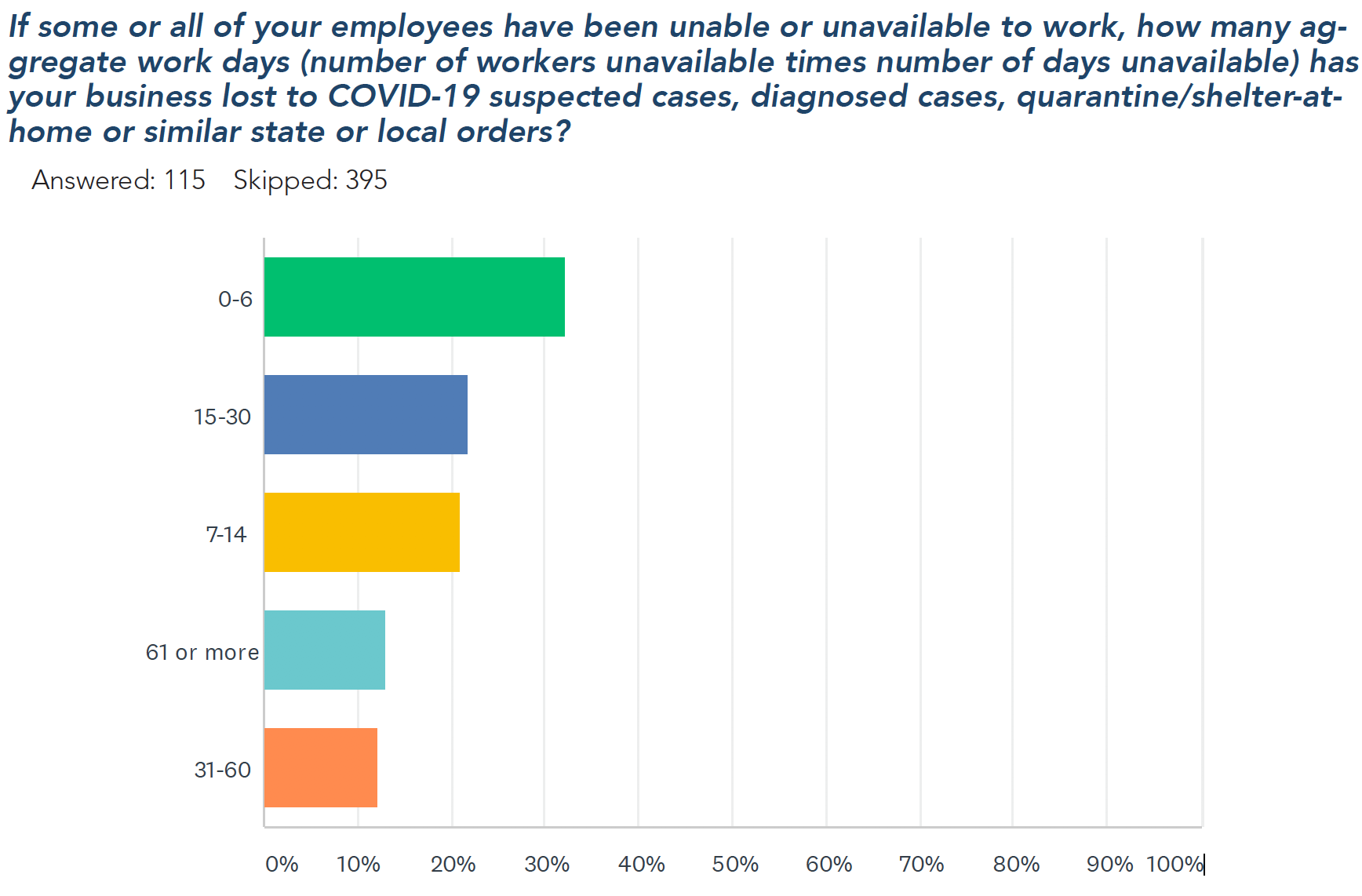 By contrast, there were frequent reports of labor shortages in meatpacking and food processing plants, where workers are in close proximity in sometimes cold and wet plants that facilitate catching and spreading covid. Some food and meat packing plants employ thousands of workers in one location, and some had hundreds of covid cases.

400 nonfarm workers tested positive for covid and eight died at the 3,700 employee Foster Farms complex in Livingston in August-September 2020 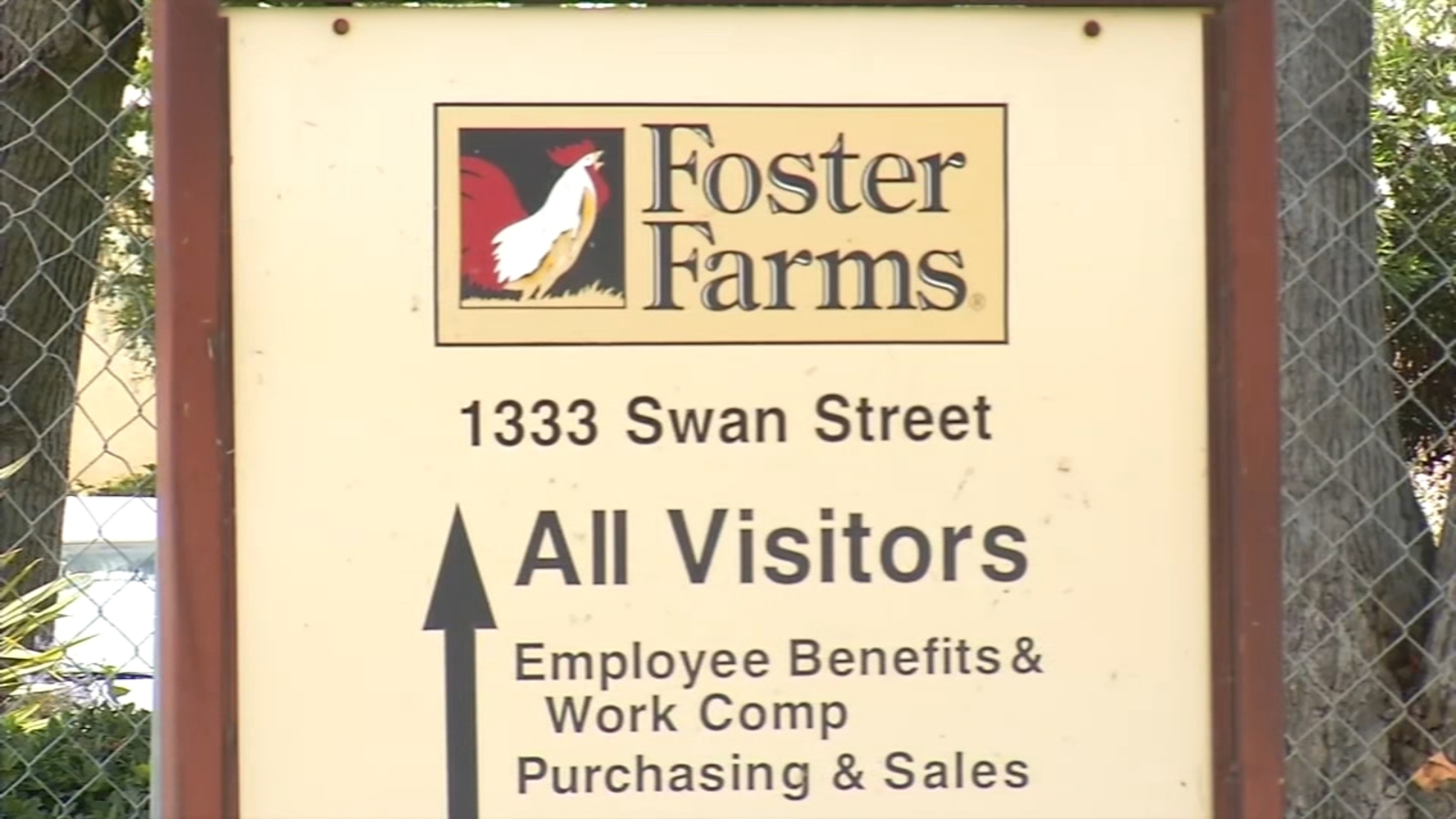 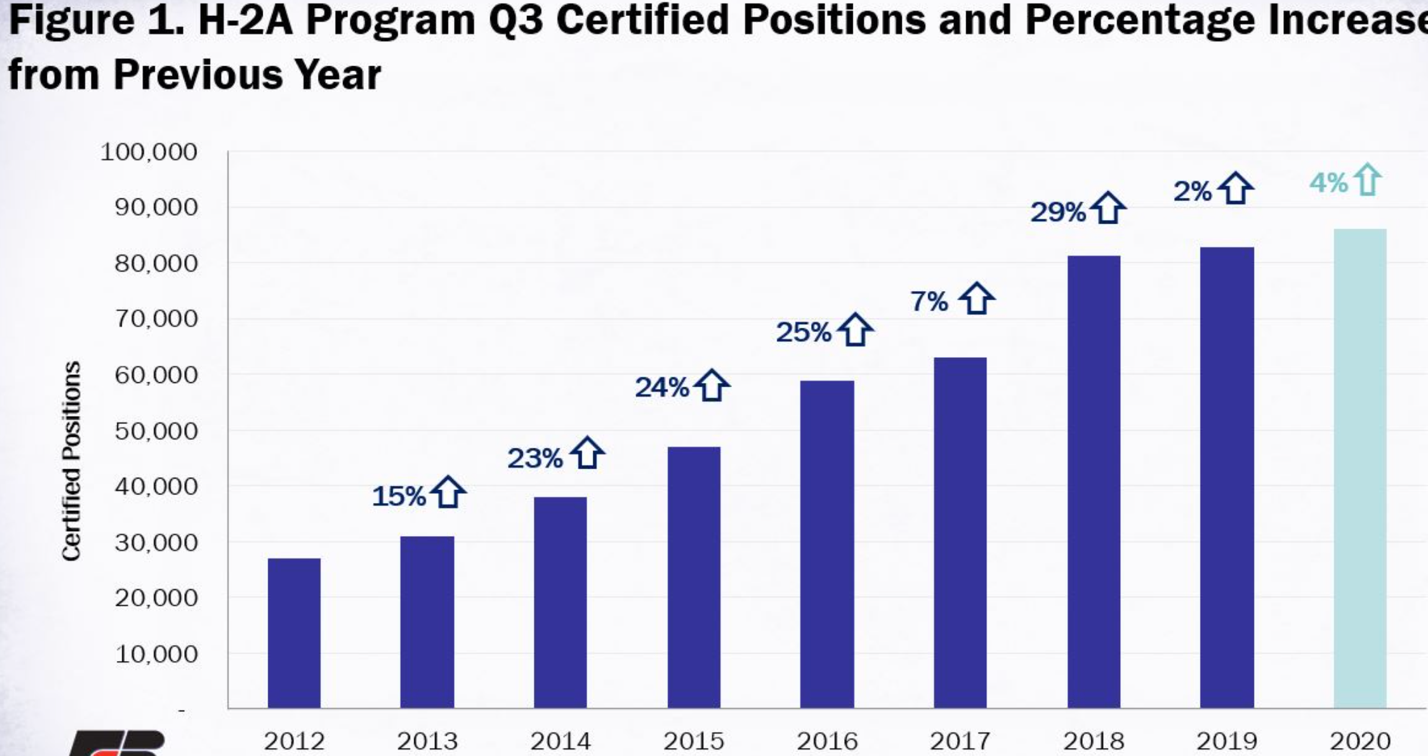 There were covid outbreaks among H-2A workers, who do 10 percent of the work on US crop farms. Several outbreaks spread quickly among guest workers, who often sleep four or more to a room in bunk beds in motels. Other H-2A workers may have contracted covid but did not develop symptoms. As the H-2A program expands, more farm employers are building or renovating housing for H-2A workers.

Covid outbreaks among H-2A workers in California in 2020

Third, covid is speeding changes that were already underway due to rising farm labor costs and an aging and shrinking US farm workforce. Most labor-intensive agriculture involves the production of the fruits and vegetables that account for a third of US crop receipts but two-thirds of US crop employment and wages. 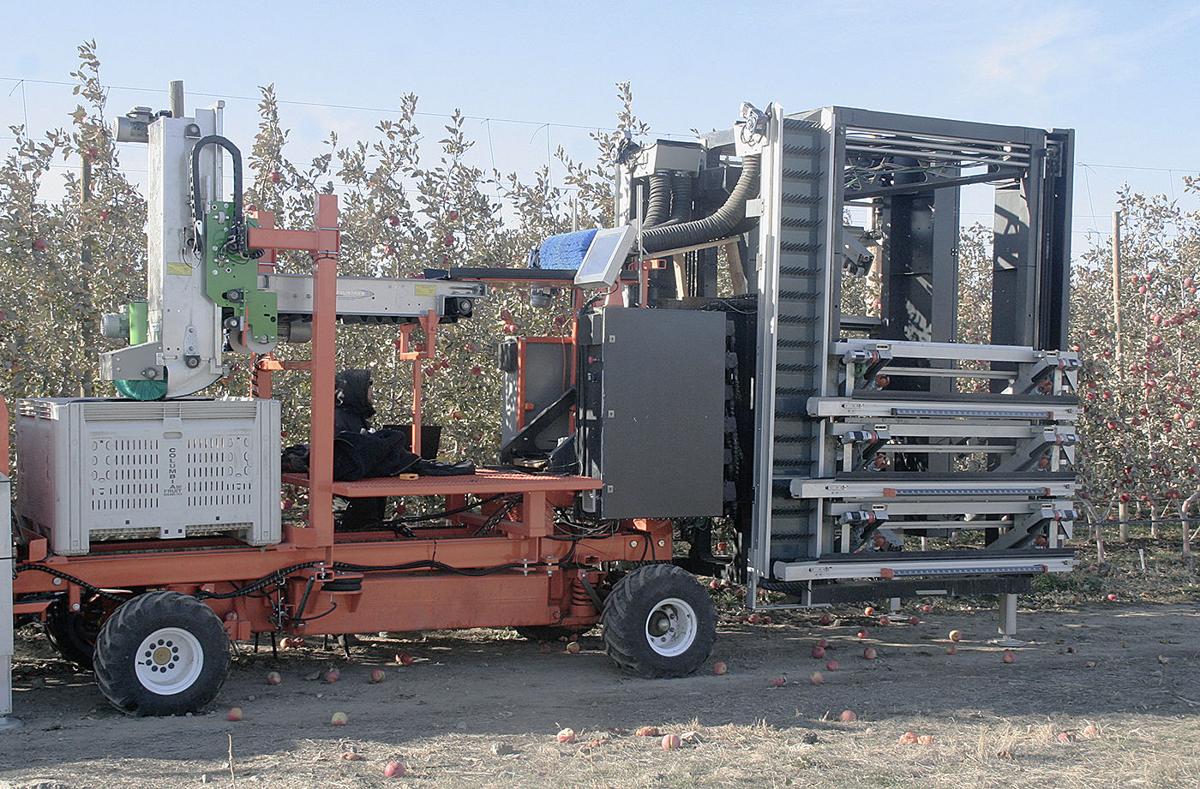 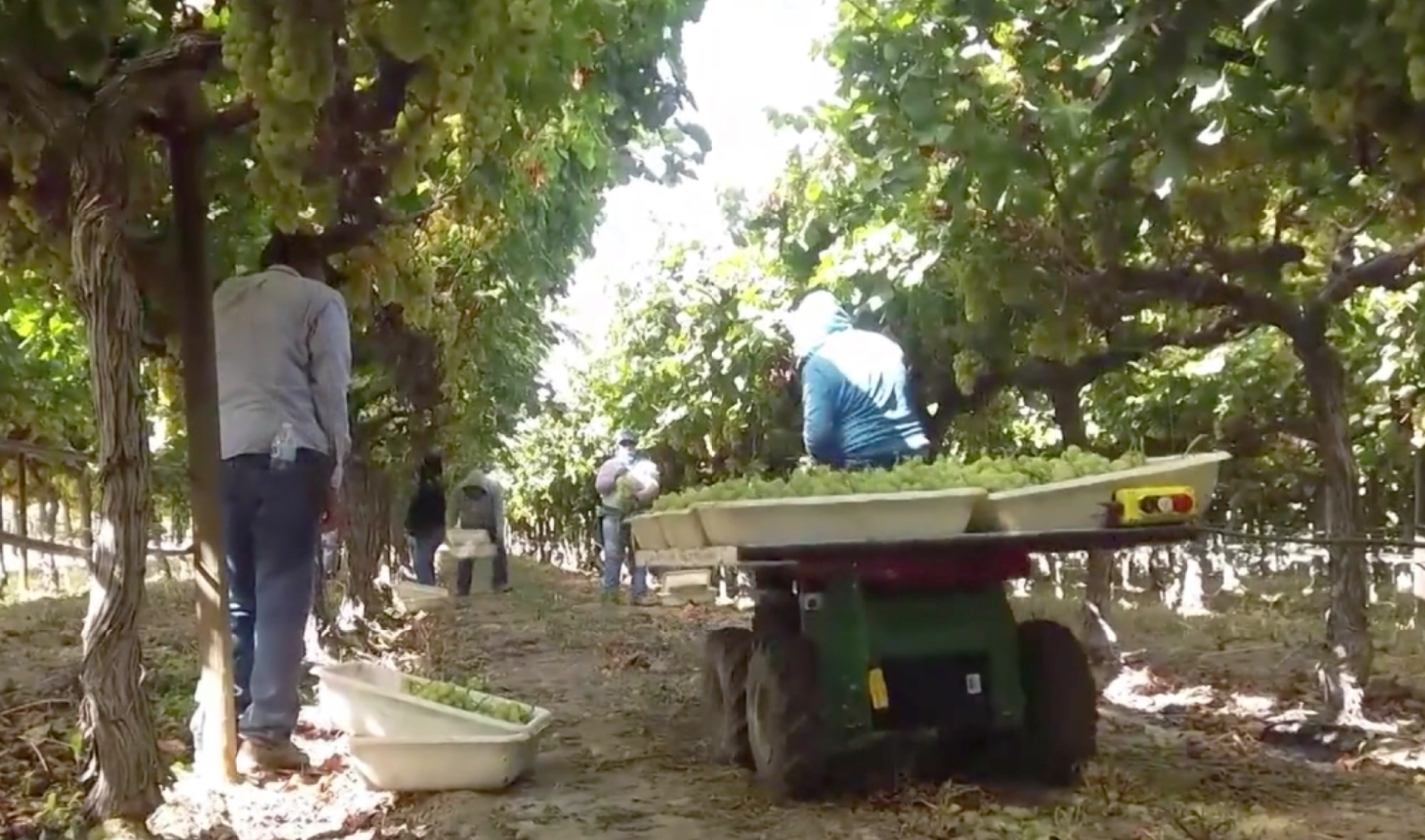 Second, the H-2A guest worker program tripled in size between FY12 and FY19, so that over 15,000 employer petitions were approved to fill almost 258,000 farm jobs with H-2A workers in FY19 (some employers filed multiple petitions). Almost 205,000 H-2A visas were issued in FY19, and the H-2A guest workers were in the US an average six months each, so they filled almost 10 percent of the 1.1 million year-round equivalent jobs in US crop agriculture. This is about half of the 20 percent Bracero share of average US farm employment at the program’s peak in the mid-1950s.

H-2A workers are especially important in California strawberries and vegetables, East Coast and Washington apples, Florida citrus, and North Carolina tobacco and vegetables. Almost all of the sheepherders caring for flocks on public lands in western states have H-2A visas, and many of the operators of custom combines that harvest wheat from Kansas to Canada are H-2A visa holders.

Producers in Mexico and other countries with lower labor costs use the same plant varieties and production techniques to produce fruits and vegetables for Americans; many export farms in Mexico are partners of US farmers and buyers. Free-trade agreements and science-based standards to deal with pest and disease threats have lowered barriers to trade in farm commodities, increasing the share of major fruits and vegetables that are imported. 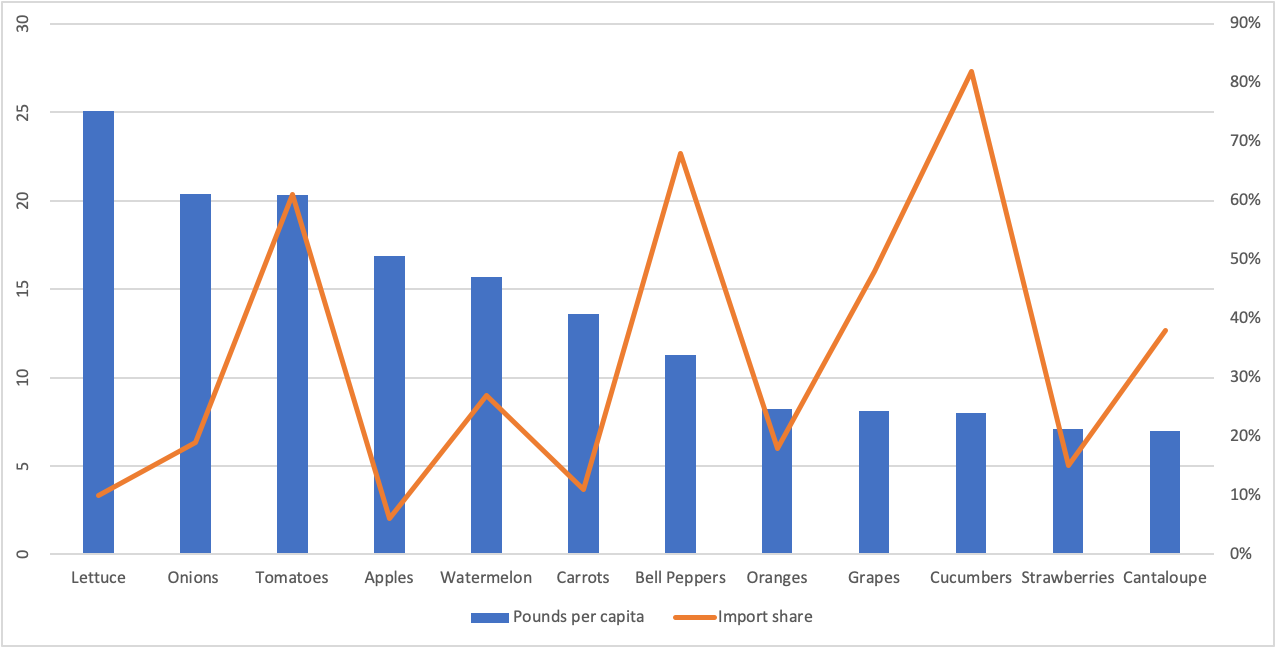