Alternatives to Hand Labor in US Fresh Tomatoes

Tomatoes are a nightshade flowering plant like potatoes and bell peppers. Tomatoes originated in South America and today are one of the world’s most widely consumed vegetables. Tomatoes are technically fruits, classified botanically as berries, but commonly used as a vegetable ingredient or side dish and included with vegetables in most statistical data. China produced a third of the world’s 182 million tons of fresh and processing tomatoes in 2018, followed by India, 19 million tons, the US, 13 million tons, and Turkey, 12 million tons.

Americans had 88 pounds of tomatoes available per person in 2019, including 20 pounds of fresh tomatoes and 68 pounds of processed tomatoes. The US processing tomato industry is concentrated in California, which produced a record 14.4 million tons from 296,000 acres in 2015, an average 49 tons an acre. California’s production of processing tomatoes fell to 10.5 million tons from 222,000 acres in 2017.

Processing tomatoes are harvested in one pass through the field with a machine that cuts the vines, shakes off the tomatoes, and conveys them past electronic sensors that discard green tomatoes and material other than tomatoes. The machine, which harvests an acre an hour, sends the tomatoes to gondolas traveling alongside the harvester that each hold 12.5 tons. A sample of tomatoes is taken from each gondola to check their quality, and water is used to flush the tomatoes from the gondolas at the processing plant, where they are turned into tomato paste and other products.

Tomatoes that are consumed fresh are grouped in several ways, including by variety and maturity at harvest. California and Florida produce 80 percent of US field-grown mature-green tomatoes, which are picked while green and ripened with ethylene gas, the plant’s natural ripening agent. Mature-green tomatoes are firm and slice well, and are preferred by the food service industry, including fast-food restaurants. Other fresh tomatoes, especially those grown in greenhouses or other protected structures and imported from Canada and Mexico, and vine ripened, meaning that they are picked after turning red on the vine.

There are many varieties of tomatoes, including roma, plum, grape, and cherry. Per capita fresh tomato consumption has been rising due to year-round availability, changing consumer preferences, and convenient packaging.

Most US fresh tomatoes are mature greens, picked when green, ripened with the tomato’s natural ripening element ethylene, and sold to food-service buyers such as fast food restaurants. The average US grower price for all types of fresh tomatoes was $0.50 a pound in 2019. Florida growers receive an average $0.55 a pound for fresh tomatoes because their tomatoes are harvested during the winter months, while California growers receive $0.43 a pound because their tomatoes are harvested in summer when tomato prices are lower. Florida’s open-field, fresh-market tomato acreage declined 16 percent between 2000 and 2015 to 33,000 acres, while California’s acreage declined 35 percent to 28,600. 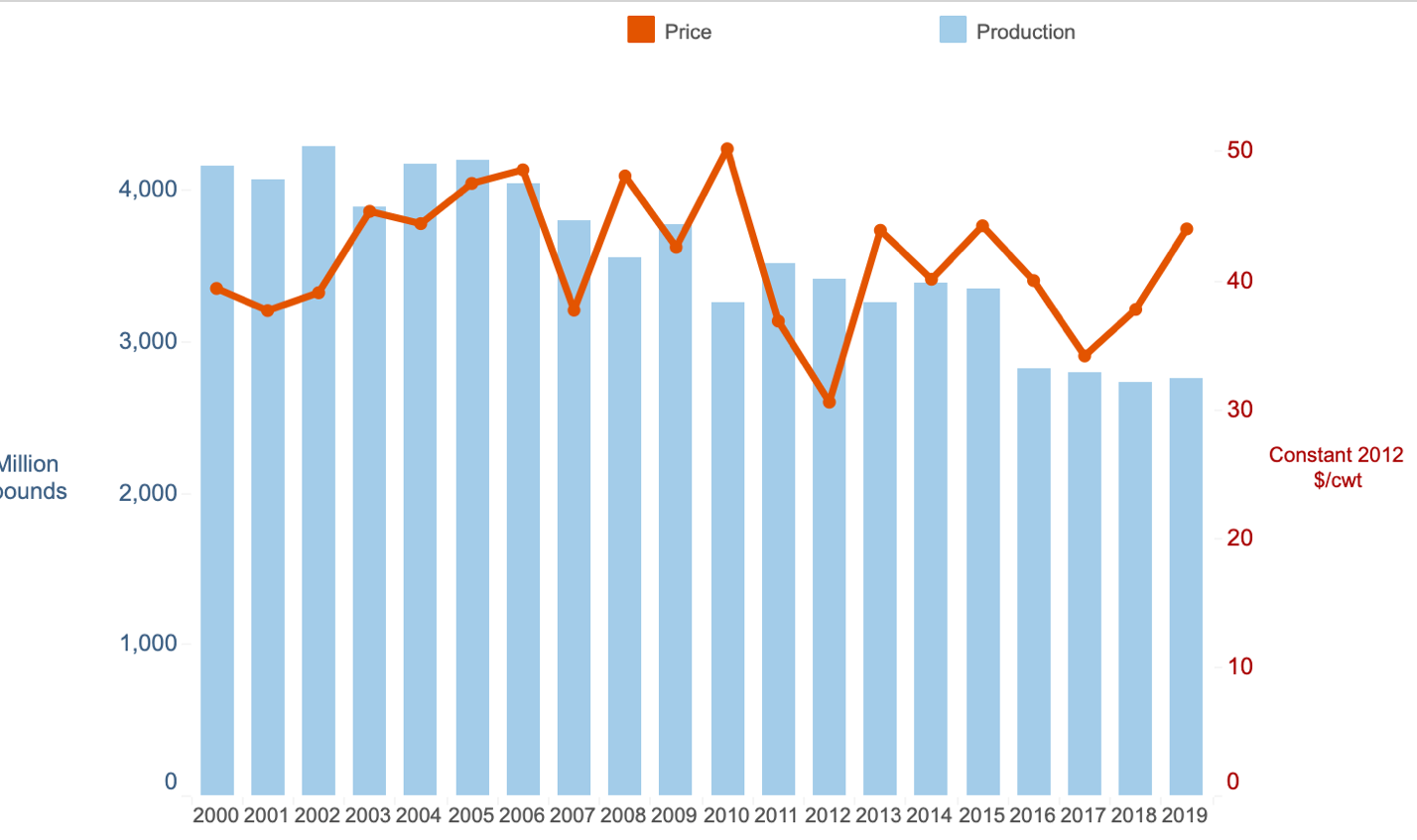 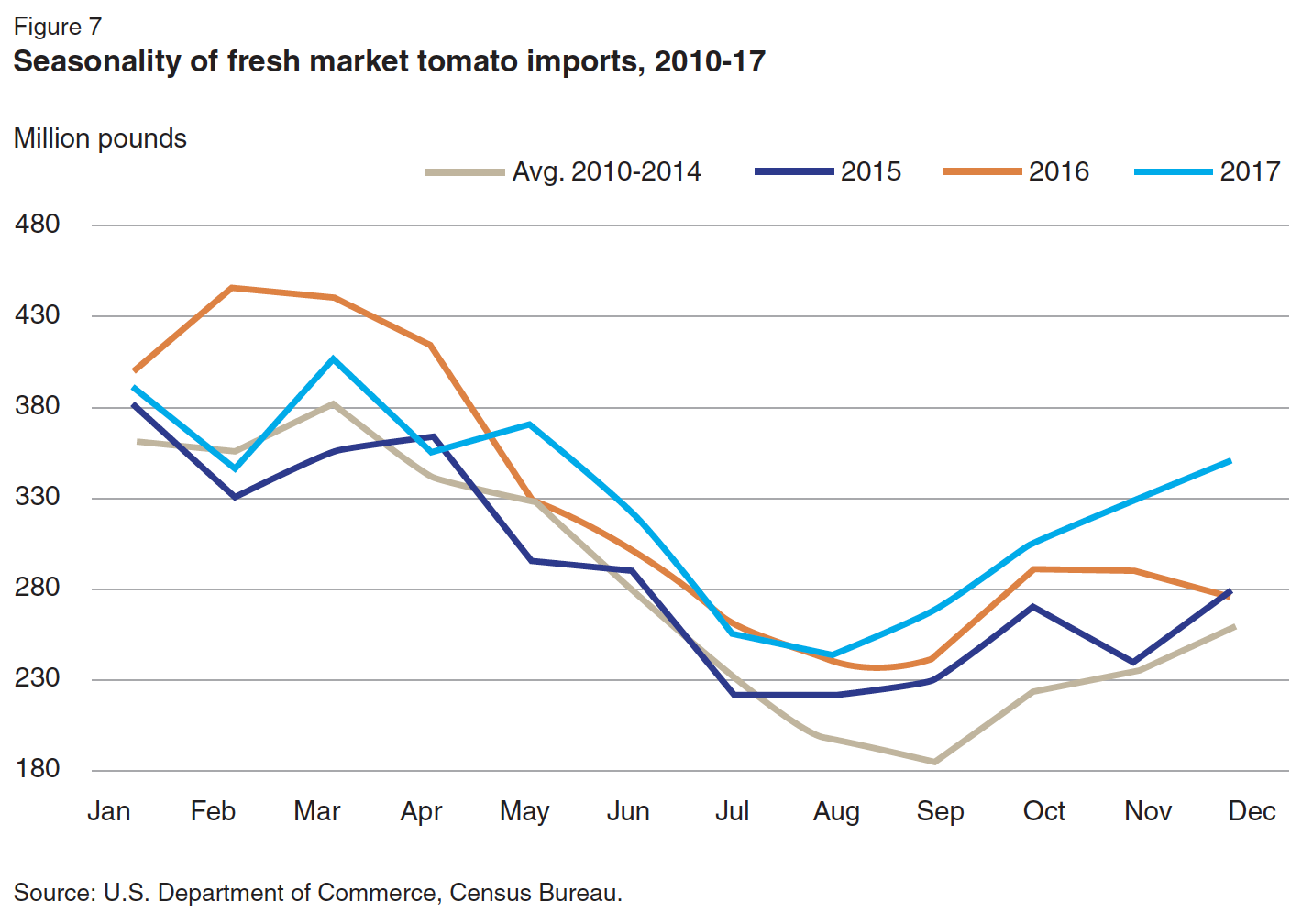 NAFTA ushered in free trade between Canada, Mexico, and the US in 1994. Florida tomato growers complained that Mexican growers were “dumping” or selling tomatoes in the US at less than their cost of production. The result was a suspension agreement in 1996 between Mexico and the US that suspended the Florida growers' dumping suit as long as Mexican producers sell tomatoes in the US for at least the minimum or reference price stipulated in the agreement.

Fresh tomatoes are 95 percent water. The combination of high transportation costs and consumer preferences for vine-ripened tomatoes increased the production of tomatoes in greenhouses and other protected culture structures closer to consumers. US tomato greenhouses are not necessarily in the same states that produce field tomatoes, since states such as Florida are often too humid for greenhouses. The four states that each produced more than 10 million pounds of greenhouse tomatoes in 2014 were California, Nebraska, Minnesota, and New York.

AMHPAC, the Mexican Association of Protected Horticulture, reported that Mexico had 106,000 acres (42,500 hectares) of protected farm structures in 2018, including 27 percent greenhouses, 29 percent hoop or macro tunnels, and 45 percent shade houses. About 70 percent of this protected culture area was devoted to tomatoes, 16 percent to bell peppers, and 10 percent to cucumbers, and over 80 percent of the vegetables produced under Mexico’s protective farm structures were exported to the US. 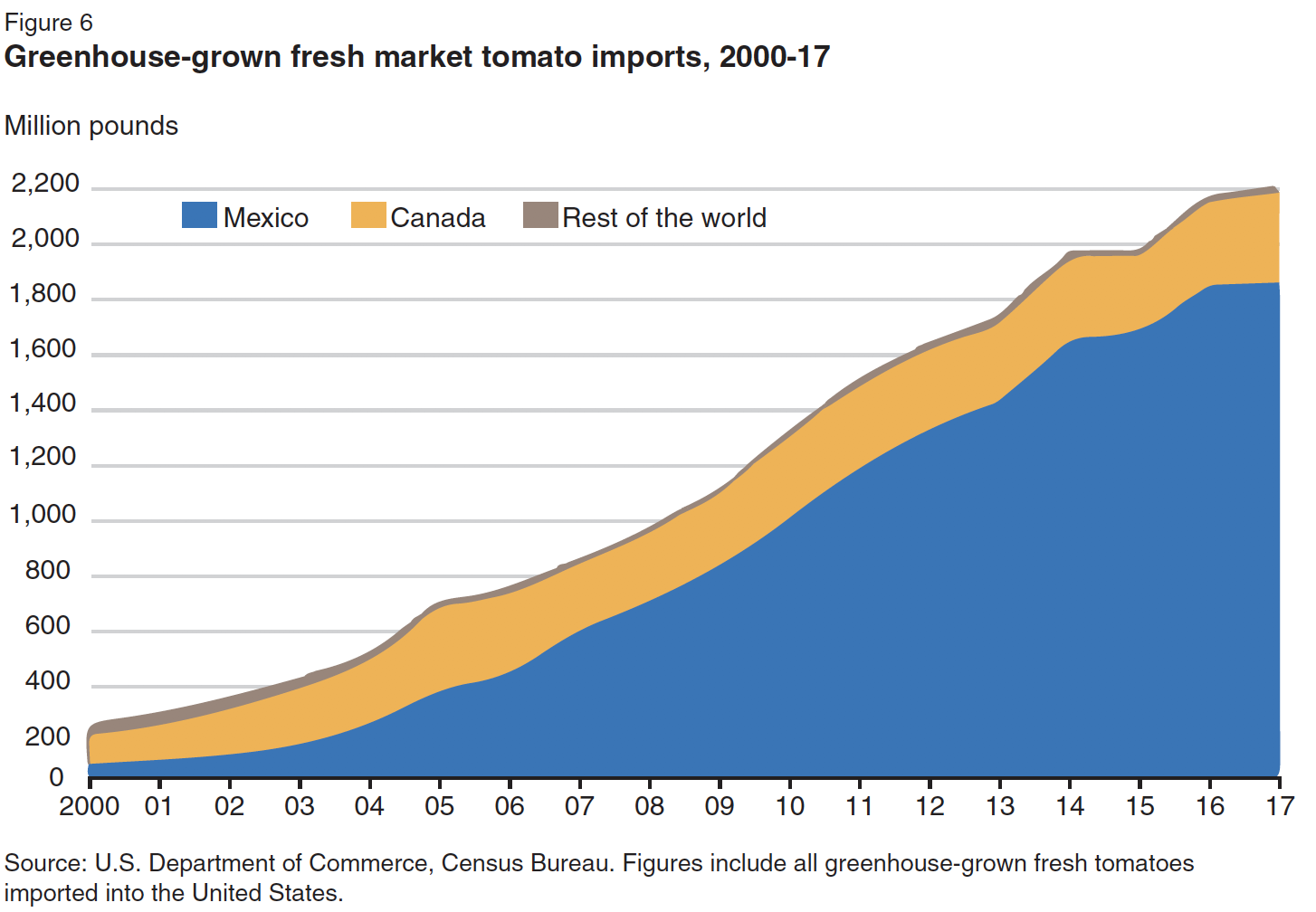 Many of the tomatoes imported from Mexico are grown in greenhouses

Most mature-green tomato fields in California are hand-harvested once by workers who have two five-gallon or 20 liter buckets that each hold about 25 pounds of tomatoes. The 30-person crew is divided in half, with 15 workers on each side of a gondola that moves slowly through the field. Workers fill two buckets every two to 2.5 minutes and carry them to dumpers on the gondola who credit pickers for their work and dump the full buckets into the gondola.

California yields in 2019 averaged 36 tons an acre. Workers harvest an average 125 pounds an hour or 1,000 pounds in an eight-hour day, so harvesting an acre of field tomatoes requires about 72 hours. With a pack out rate of 75 percent, net yields are 27 tons or 2,160 boxes (25 pounds each) an acre.

California tomato pickers in 2019 and 2020 were paid $0.74 a bucket for picking round tomatoes and $0.84 a bucket for picking smaller Roma tomatoes. Data from one FLC found that workers filled an average 24 buckets an hour, meaning 12-two bucket trips to the dumper, and earned almost $18 an hour. The tomato picking season is relatively short. US harvest workers averaged fewer than 200 hours in 2019, while H-2A workers averaged 400 hours. H-2A workers picked more tomatoes because they worked more hours, not because they picked more buckets per hour.

The UFW during its 2016 convention reported contracts with three California tomato growers: Pacific Triple E, 450 workers; Gargiulo Tomatoes, 350 workers; and San Joaquin Tomatoes, 350 workers. Pacific Triple E and San Joaquin Tomatoes have since stopped growing tomatoes in California, while Gargiulo expanded to about 1,800 workers in California and re-negotiated its 2016-19 contract with the UFW to cover a peak 650 workers in 2020.

Florida mature-green tomatoes cost more to produce and generate higher grower prices because they are harvested during the winter and spring months. Some 26 million 25-pound boxes of round tomatoes were shipped in 2018-19, down almost half from 38 million boxes in 2011-12. Grower prices are $15 to $20 a box between October and February, and decline toward $10 a box as the season winds down in the spring.

Plum, grape, and cherry tomatoes add about 30 percent to Florida’s round tomato shipments, making total shipments 40 million 25-pound equivalent boxes in 2018-19. If 40 million boxes of Florida tomatoes had an average grower price of $20, reflecting the fact that non-round tomatoes are more valuable, tomato revenues are $800 million a year for a billion pounds of tomatoes. At two cents a pound for picking, labor costs are $50 million.

Florida harvest crews often have 24 pickers and two dumpers, with 12 pickers covering six rows on each side of a truck that carries 1,000 pound bins or a gondola that moves through the field. Pickers receive tokens from the dumper for each bucket picked to record their productivity and earnings. 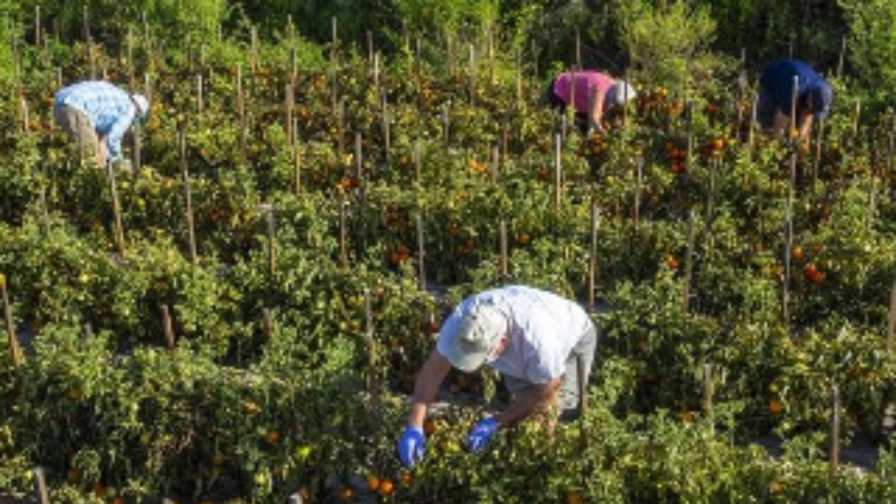 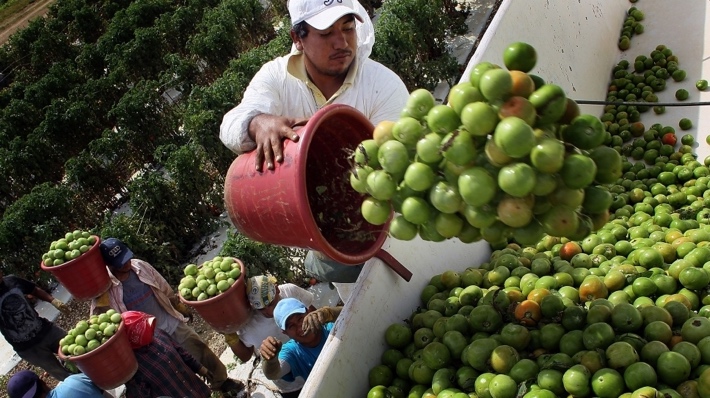 Pickers need a minute or more to fill a bucket with tomatoes, so that filling two buckets, carrying them to the dumper, and returning to pick again requires two to three minutes, depending on the yield and the picker’s proximity to the truck or gondola. During the first harvest, when yields are highest, pickers average 30 buckets an hour or 180 buckets in a six-hour day, but productivity declines on subsequent picks due to lower yields.

There are no reliable data on the number of workers employed to pick Florida tomatoes. Combining $33 million in picking costs with the Florida Tomato Committee estimate of 33,000 pickers suggests average earnings of $1,000; at $100 a day, these workers would be employed an average of 10 days. If tomato pickers average 50 days of work and earn $100 a day, only 6,600 workers would be required to harvest the Florida crop. Roma, grape and other types of tomatoes have higher piece rates, but are a small share of tomato production. If picking costs are $40 million and workers average 40 days of work, 10,000 harvest workers would be required.

Some California fresh-market tomato growers used the mechanical harvester that was developed for processing tomatoes to harvest mature green tomatoes in the 1960s and 1970s. However, these growers soon returned to hand harvesting, in part because machine-harvested fields could be picked only once and because pack out rates, the share of marketable fruit from the field, were significantly lower for machine-picked tomatoes. Florida has not used harvesting machines because tomato plants are staked and harvested multiple times.

The fact that California tomatoes are harvested only once, and that the state has machines to harvest processing tomatoes, should make California mature-green tomatoes amendable to machine harvesting. However, machine-handled fruit can have fungal decay that shows up a week or two after harvest, shortening the shelf life of machine-harvested tomatoes. Mechanization in Florida would be more difficult because tomatoes are staked and picked several times, so that a cut-and-shake machine could not be used unless Florida growers developed tomato varieties that ripened uniformly and were not staked.

A major obstacle to private investment in a fresh tomato harvesting system is the small number likely to be sold. California has about 25,000 acres of mature-green tomatoes. If machines harvested an acre an hour, slightly slower than the machines that harvest processing tomatoes, and they worked 15 hours a day to harvest 15 acres a day, each machine could harvest 1,500 acres over a 100-day harvest season, and 17 machines would be needed to harvest the California crop. If harvesting machines worked 10-hour days, the number sold could be 30 or more. Such a limited market reduces private sector incentives to tackle the plant breeding and technical challenges, even if the same machine were also used in Florida and doubled the market to 60 machines.

The major labor savings in the US fresh tomato industry have come from rising imports. Then Mexican President Salinas urged the US to approve NAFTA in 1990 by asserting that Mexico can export tomatoes or tomato pickers to the US. Although it took far longer than Salinas predicted to develop a tomato export industry, Mexico is now the world’s leading exporter of fresh tomatoes, exporting tomatoes worth $2.2 billion or 24 percent of the world’s $9 billion in tomato exports in 2019. The 98 million 25-pound equivalent boxes of tomatoes imported from Mexico in 2018 were mostly vine-ripened and produced in greenhouses and shade structures.

Canada also exports tomatoes to the US, mostly vine-ripe tomatoes grown in greenhouses around Leamington, Ontario, the tomato capital of Canada and the US imports fresh tomatoes from the Dominican Republic and Guatemala. US imports of fresh tomatoes could rise further in the event of free trade with Cuba, a major source of fresh tomato imports in the 1950s.

Production of US open-field tomatoes is expected to shrink due to competition from imports and greenhouse tomatoes. A shrinking open-field US tomato industry is unlikely to provide the financing for new plant varieties, machines, and packing systems to handle machine-harvested tomatoes. Meanwhile, Canadian and US fresh tomato producers rely increasingly on Mexican guest workers to harvest tomatoes, even as imports from Mexico rise.