The H-2 (A) program has since 1952 allowed US farmers who anticipate too few US workers to fill seasonal farm jobs to be certified to recruit and employ guest workers. During the 1950s, the then H-2 program certified fewer than 10,000 US farm jobs a year to be filled with foreign farm workers, while over 450,000 Mexican Braceros a year were admitted.

After the Bracero program ended in 1964, DOL required farm employers to pay H-2 guest workers and US workers a special minimum wage called the Adverse Effect Wage Rate at a time when US farm workers were not covered by the minimum wage. As a result, H-2 certifications remained low during the 1970s and 1980s,

The H-2 program was changed to H-2A in the Immigration Reform and Control Act of 1986, and was expected to expand as federal sanctions on employers reduced the employment of unauthorized workers. Instead, unauthorized migration surged in the 1990s, the Florida sugarcane harvest that employed 10,000 H-2A workers was mechanized, and the H-2A program certified fewer than 20,000 farm jobs a year.

The H-2A program expanded in the past decade as unauthorized Mexico-US migration slowed in the wake of the 2008-09 recession. The number of jobs certified more than doubled between FY12 and FY19 to almost 258,000. About 80 percent of DOL certifications result in H-2A visas issued to foreigners, since some employers do not follow through and some H-2A workers fill two US jobs, as when an association brings H-2A workers into the US and moves them from one farm to another, so 204,000 H-2A visas were issued in FY19.

In order to receive certification from US DOL to employ H-2A workers, farm employers must satisfy three major criteria, they must try and fail to recruit US workers, offer free and approved housing to guest workers and out-of-area US workers, and pay the state’s Adverse Effect Wage Rate, which ranges from almost $12 to over $15 an hour across US states in 2020. AEWRs are higher than federal or state minimum wages, the prevailing hourly or piece rate wage, or the wage in an applicable collective bargaining agreement. 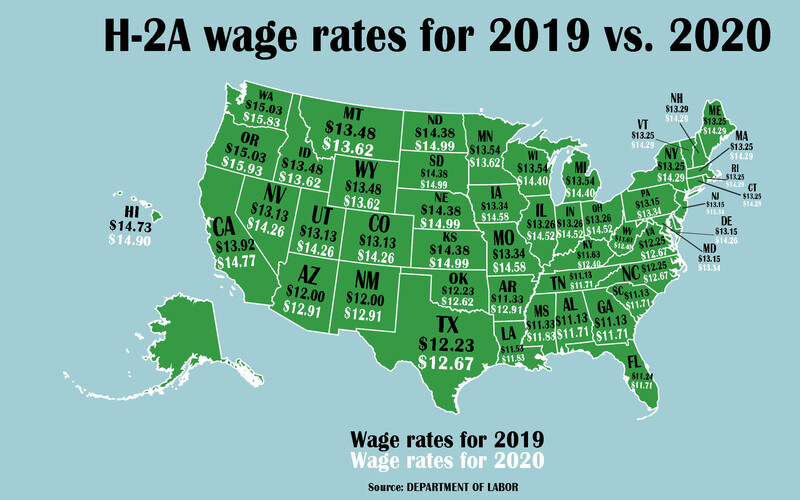 DOL has since 1987 set the AEWR that farm employers must offer and pay to H-2A and US workers employed alongside them at the average hourly earnings of non-supervisory field and livestock workers reported by farm employers to USDA’s NASS and published in Farm Labor (supervisor earnings are included in the all hired wage reported in Farm Labor, but not in the field and livestock worker wage). Farm employers report employment and earnings data for the week that includes the 12th of the month of January, April, July, and October.

DOL uses FLS data to set AEWRs for states and multistate regions, but USDA cancelled the FLS in September 2020. Worker advocates sued USDA, and a federal judge in October 2020 ordered USDA to conduct the survey so that DOL could continue to use FLS average hourly earnings data to set AEWRs.

Instead, DOL in November 2020 changed the basis for calculating AEWRs DOL issued a final rule that leaves 2020 AEWRs in place in 2021 and 2022 for most field and livestock occupations and then will begin to adjust them according to changes in DOL’s Employment Cost Index for private wage and salary workers in 2023. AEWRs for other agricultural occupations, such as supervisor and equipment operator, are to be set using the average annual statewide gross wage in the OES for the state or the US for the particular occupation.

DOL’s changes to the AEWR methodology will lower AEWRs for most H-2A workers and raise the AEWRs of supervisors, equipment operators, and other specialized workers. Between 2010 and 2019, the average annual earnings of field and livestock workers in the FLS rose 37 percent, while the change in the quarter one employment cost index for private sector workers rose 22 percent. QCEW average weekly earnings for all workers covered by UI in agriculture (NAICS 11), rose 37 percent between 2010 and 2019.

Since each percentage point change in the AEWR translates into $24 to $30 million a year, changing the AEWR affects farm employers and workers. For example, if the H-2A program remains unchanged in 2021 and 2022, leaving AEWRs unchanged could reduce the H-2A wage bill in 2021-22 by up to 10 percent or $240 million to $300 million. Beginning in 2023, if the ECI rises by two percent a year while other measures of agricultural wages rise by four percent a year, the H-2A wage will would rise half as fast by being based on the ECI. 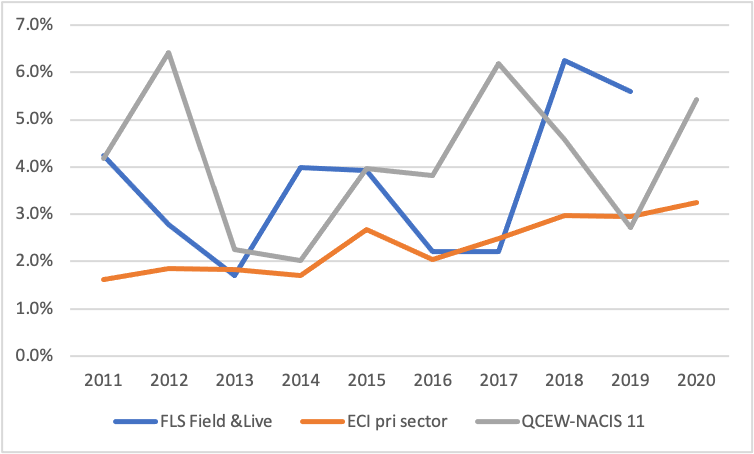 DOL’s change to the AEWR methodology is rooted in changes proposed July 26, 2019 that drew over 83,500 comments. DOL proposed to change from one AEWR per state to instead “establish separate AEWRs by agricultural occupation to better protect against adverse effect on the wages of similarly employed workers in the US” (p36171). Most of the commentators opposed the e proposed changes, arguing that being more sensitive to a relative handful of H-2A jobs and workers increased complexity in the H-2A program and did not solve the problem of large year-to-year variation in farm wages and thus AEWRs.

Under the July 2019 proposed rule, employers would use the Standard Occupational Classification (SOC) system to designate the occupation of the job to be filled. Farming occupations are in the SOC 45 code, and include 45-2092 for farm workers, crop, nursery, and greenhouse, 45-2091 for agricultural equipment operators, and 45-1011 for first-line supervisors.

DOL justified the switch from one AEWR per state to an AEWR for each occupation to better protect higher-wage US workers such as supervisors and construction laborers. However, setting AEWRs by occupation means more complexity and year-to-year variation in AEWRs.

The FLS sample is too small to generate data for many farming occupations. DOL anticipated this lack of FLS data, and proposed to use average wages from the Occupational Employment Statistics (www.bls.gov/oes/home.htm) to set AEWRs for occupations not covered by the FLS. The OES surveys 200,000 nonfarm firms twice a year to obtain employment and wage data by job title or occupation, and uses three years or six surveys with data from 1.2 million establishments to generate wage estimates for 800 occupations at the MSA, state, and US levels. The OES has mean and median wages and wages at the 25th and 75th percentile of the distribution to distinguish the wages of entry-level from experienced workers.

In November 2020, DOL “locked in” 2020 AEWRs for field and livestock occupations, 45-2092 crop workers and 45-2093 animal workers, through 2021 and 2022, and beginning in 2023 will adjust them according to the change in the ECI cost per hour worked for private sector wage and salary workers. The ECI covers most private sector workers, muting changes that may affect particular industries, occupations, and areas.

DOL will use in the OES to set and adjust AEWRs in non-field and livestock occupations, or the US OES wage for the occupation if OES does not generate a state wage.

DOL acknowledged that most commentators opposed its July 2019 proposal to switch from one statewide AEWR to a half-dozen occupation-specific AEWRs. DOL’s action is akin to using a sledgehammer to kill a fly. In order to ensure higher AEWRs for a relative handful of equipment operators and supervisors, DOL has increased the complexity of the H-2A program and opened a Pandora’s box to disputes over farm labor data.

The farm labor market is dynamic, and has been changing even faster in recent years as the share of unauthorized workers decreased and the shares of US citizen and H-2A workers have increased. Wages and average earnings were rising with low unemployment rates, increased state minimum wages, and increased demand for labor-intensive commodities such as berries. One result of this dynamism was rising wages at different rates across commodities and areas.

The DOL rule will reduce AEWRs for most H-2A field and livestock workers, reduce increases in the AEWR if the ECI rises slower than FLS earnings, and raise AEWRs for equipment operators and supervisors with the switch to the OES.

DOL appears to have created complexity and uncertainty in the H-2A program in the name of increased equity for a few skilled farm workers while lowering AEWRs for most H-2A workers and the US workers employed alongside them.