Governments opened otherwise closed borders for some migrant workers, especially health care and farm workers. The demand for migrant health care workers is rising due to population aging and wages that are sometimes held down in order to avoid raising the taxes that pay the wages of caregivers for children and the elderly. Specialized farms that produce labor-intensive commodities prefer just-in-time guest workers to just-in-case local workers, who may not show up as promised or perform farm work only until they find better nonfarm jobs.

OECD countries admitted over five million temporary foreign workers in 2018, including 1.1 million in Poland, which sends seasonal workers to Western European countries and admits Ukrainians and citizens of other ex-USSR countries to fill seasonal jobs in Poland. 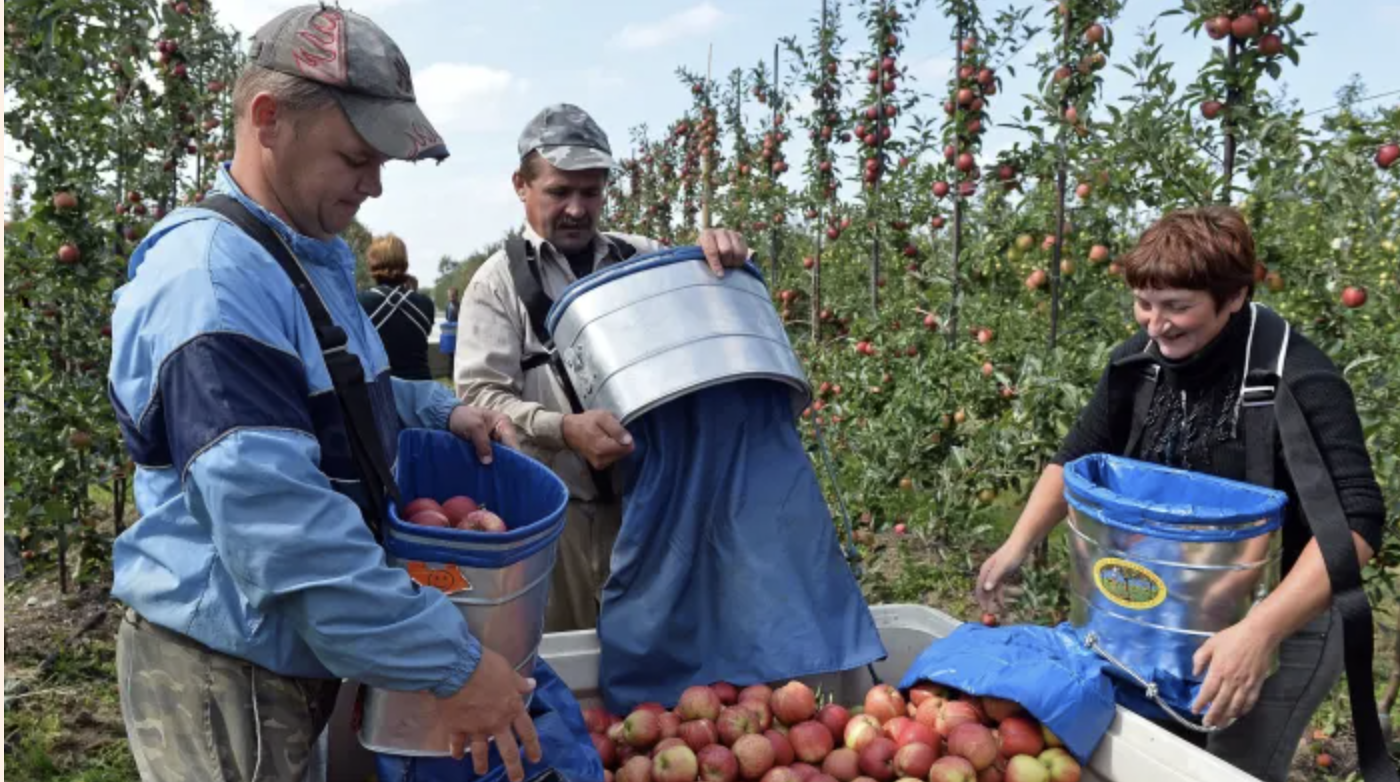 Poland, the US, and Germany accounted for half of the temporary foreign workers in 2018

Most migrant workers are low skilled. The greatest gap between the share of migrant- and native-workers in particular occupations is in domestic work (activities of households as employers). Hospitality (accommodation and food services), support services to business such as janitors, and construction also have higher shares of migrant- than native-workers. The migrant share of farm workers is higher the US but not in Europe, which has more small family farms. 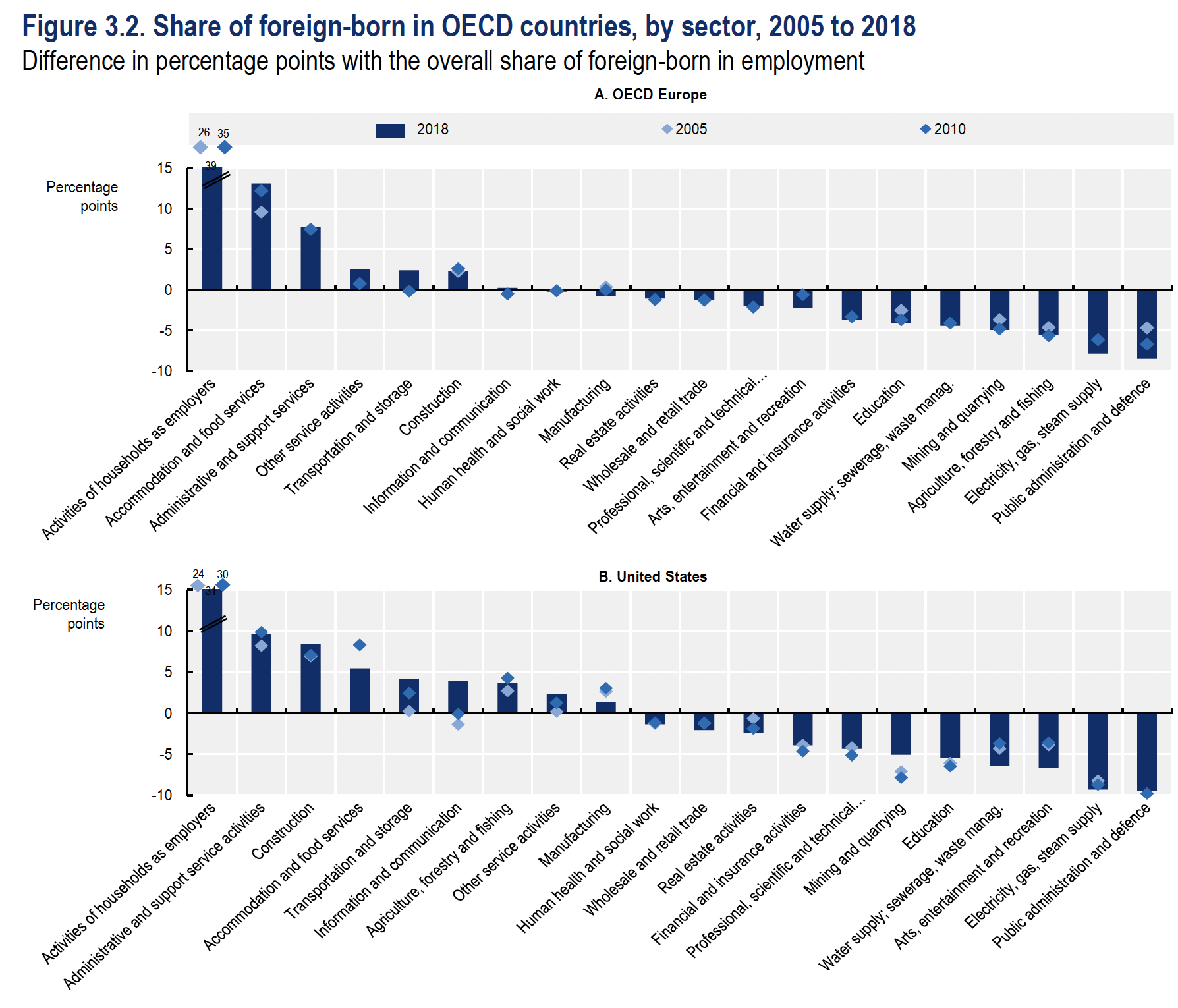 Integration. Many foreign-born workers in industrial countries lost their jobs during pandemic lockdowns, pushing unemployment rates for foreign-born workers higher than unemployment rates for native-born workers. Migrants are more likely to hold essential jobs that require personal interactions, making it harder for them to avoid contact with people who may have and transmit covid. Once infected, migrants can spread covid to family members in often crowded housing. 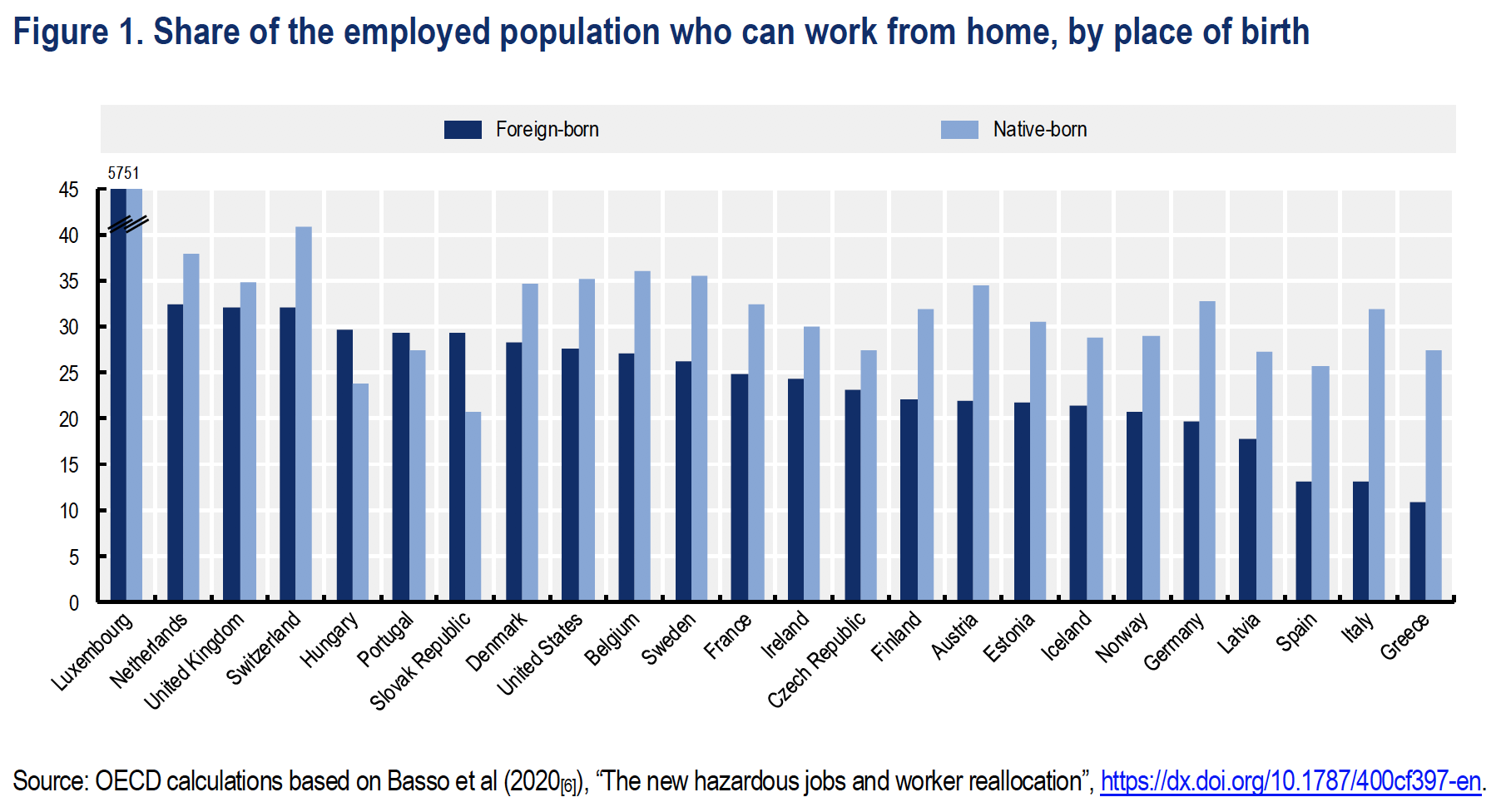 Covid may mark a change in the trajectory of ever more labor mobility. As governments and firms reorient their supply chains from just in time to just in case, investors may become more cautious about making investments that assume just-in-time guest workers will be available, as with apple orchards that are planted in remote areas and become unprofitable if labor costs rise. Remote working arrangements may mark a new era of more trade in medical and other services via the internet rather than labor mobility to provide services in-person.

Before covid, migrants were overrepresented in some of the sectors where employment is growing and labor productivity is low, such as hospitality. One perennial migration question is the proper role of industrial policy or employer voices in migration policy decisions. If employers in a particular sector have labor shortages, should governments respond by admitting migrants to fill particular jobs, or is it better to admit migrants based on their human capital, such as youth, education, and language ability, and allow them to find jobs anywhere?

The US follows an employer-led or demand approach, with employers sponsoring named foreigners to fill particular jobs. Australia and Canada follow a human-capital or supply approach, giving priority to foreigners with more education and other traits that promise successful integration. Demand and supply approaches converge if policy makes it easiest for employers to sponsor college-educated migrants or if foreigners receive extra points for having a job offer.

Most OECD countries have sector-specific policies to manage their agricultural and health care systems, but not always sector-specific migration policies. Agriculture is an exception, since at least 15 OECD countries have programs to admit seasonal foreign farm workers. The usual procedure requires employers to try and fail to recruit local workers before being certified to hire migrants.

Procedures to recruit migrant workers vary. Employers make the decision on whom to hire, but some migrant-sending governments maintain work-ready pools to expedite employer recruitment. Migrants usually have contracts that tie them to one employer while abroad, and farm workers must usually depart after up to 10 months abroad, although Israel and Japan allow migrant farm workers to remain three to five years.

Third, who enforces the contracts that tie migrants to employers, and what happens to migrants who complain about their employer and are fired? Are dis-satisfied or fired migrants allowed to change employers, or must they leave the country? Fourth, should governments worry if dependence on migrants increases over time? If yes, what is the optimal strategy to reduce dependence, quotas, levies or some combination? Finally, do the remittances and returns from seasonal migration speed development in migrant areas of origin?

These certification, recruitment, enforcement, and dependence questions are contentious, especially because seasonal farm worker programs often have unanticipated effects. The 1942-64 US Bracero programs admitted over five million Mexican farm workers (some returned year after year; perhaps 1.5 million Mexicans participated) and set the stage for the movement of 10 percent of people born in Mexico to the US between the 1980s and 2010. The current H-2A agricultural guest worker program admits 200,000 Mexicans a year, and certification, recruitment, and enforcement decisions are litigated routinely.

When countries tailor migration policies to specific sectors, should they require employers who hire migrant workers to also develop plans to reduce dependence on migrants over time? A US policy that gave inner-city hospitals easy access to foreign nurses around 2000 required the hospitals to develop plans to reduce their dependence on foreign nurses over time, but was soon ended when it became clear that nursing-autarky plans were developed by consultants and not implemented by hospitals. New Zealand is launching a similar program in 2021 that allows industries seeking foreign workers to negotiate agreements with the government that expedites migrant admissions in exchange for plans to employ more native workers over time.

Inertia is a powerful force. A quick return to normal with a vaccine may also return labor mobility patterns to their pre-covid trajectories. However, a slow return to pre-covid economic conditions may break some migration patterns and the networks that link employers in one country to workers in another. Future migration reports may emphasize the 2020 covid breakpoint in a manner similar to the 1989 fall of the Berlin Wall or the September 11 terrorist attacks that mark before and after points in foreign or security policy.

Domestic work is the sector with the highest share of migrant workers, 2016-18

Another appendix table includes inflows of foreigners by country between 2008 and 2018. The OECD notes that the data are not necessarily comparable across countries. The inflow data for traditional immigration countries such as Australia, Canada, and the US include foreigners admitted as immigrants, meaning they have the right to work in any job that does not require citizenship and apply to naturalize after three to five years. The inflow data for many European countries include foreigners admitted for more than 90 days, including foreign students and guest workers who may not become immigrants.

Inflows of foreigners rose in many countries between 2008 and 2018, especially in Germany