The purpose of labor law enforcement is to ensure that the rights of workers are protected and to level the playing field for employers, so that those who underpay workers or engage in other cost-reducing behavior in violation of labor laws do not gain a competitive advantage over law-abiding employers. The US Department of Labor’s Wage and Hour Division (WHD) is the major federal agency that protects the rights of US farm workers and H-2A guest workers.

WHD conducted over 31,000 investigations in US agriculture between FY00 and FY19, ordered $66 million to be paid in back wages to 154,000 farmworkers, and assessed $56 million in civil money penalties for labor law violations. The number of WHD agricultural investigations fell from over 2,000 a year in the early 2000s to 1,100 a year or about 100 a month recently.

Back Wages owed to Farm Workers and CMPs peaked in FY13

WHD enforces two major farm labor laws: the Migrant and Seasonal Worker Protection Act and regulations governing the H-2A guest worker program. About 45 percent of WHD agricultural investigations over the past two decades found violations of MSPA. The number of MSPA violations peaked in FY14, and has since declined by more than half.

However, back wages owed to farm workers, and CMPs assessed for MSPA violations, peaked in nominal dollars in FY19. A seventh of all back wages and CMPs assessed over the past two decades for MSPA violations were found in FY19, when the average back wage owed per employee was $572, three times the average $166 owed over the past two decades.

Detailed data from 17,000 agricultural establishments that were the subject of 20,260 investigations between FY05 and FY19 found 292,400 violations of the three major federal farm labor laws, the Fair Labor Standards Act (24 percent of all violations), MSPA (30 percent), and H-2A program rules (32 percent). About 30 percent of the employers who were investigated had no violations and 31 percent had five or more violations. The employers with five or more violations accounted for two-thirds of all labor law violations found.

Almost 30 percent of investigations found no violations, and 31 percent had 5 or more 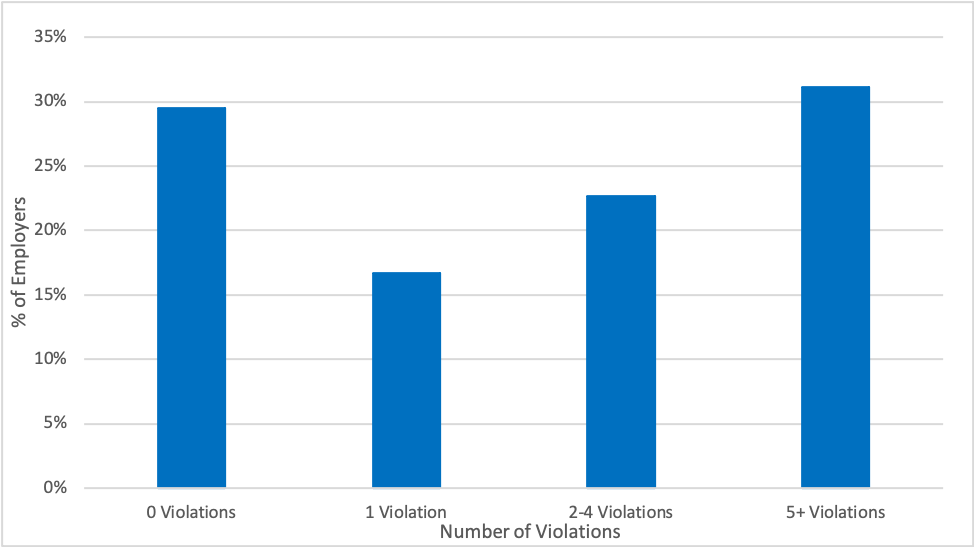 Data include violations of H-2A, MSPA, FLSA, and other labor laws enforced by WHD
Source: https://enforcedata.dol.gov/views/data_catalogs.php

Farm labor contractors (FLCs) play a special role in farm labor markets, earning revenue by finding workers for employers and jobs for workers. The Quarterly Census of Employment and Wages (QCEW) reports the average employment of FLCs who enroll their workers in the unemployment insurance systems that are operated by states, which means that QCEW coverage of FLC employment varies by state. Almost all workers employed in agriculture are included in QCEW data for California and Washington, but H-2A guest workers and US workers employed by smaller FLCs and on smaller farms are excluded from the QCEW in Florida, Georgia, and other southern states.

FLCs are becoming more important as farmers outsource labor-intensive tasks to crop support service firms (NAICS 1151), defined as nonfarm employers who bring workers to farms to plant and harvest crops. Across the US, FLCs account for over half of the employment in crop support services. FLCs accounted for 14 percent of average employment in US agriculture in 2019 and 25 percent of all labor law violations found between FY05 and FY19.

Among FLCs, a relative handful of “bad apples” account for a high share of violations. The 10 US FLCs with the most violations were a miniscule share of the 4,800 FLCs investigated, some several times, but they accounted for a sixth of all labor law violations found at FLCs and 10 percent of all back wages owed by FLCs.

The bad apple problem is more pronounced in California, where 22 investigations of the 10 FLCs with the most violations detected 28 percent of all violations committed by the state’s FLCs. These top 10 California FLC violators accounted for 22 percent of the back wages owed to farm workers.

The bad apple issue is also apparent when employers are ranked by their share of all violations found in a particular commodity or NAICS code. The five percent of US crop farms with the most violations of federal labor laws between FY05 and FY19 accounted for two-thirds of all the violations of federal labor laws detected on US crop farms. A similar bad apple story applies to US FLCs, where the five percent with the most violations accounted for two thirds of all violations found among US FLCs.

WHD investigators record the commodity of the employers who are investigated. A comparison of the share of violations with the share of QCEW employment in a NAICS code or commodity shows that commodities with H-2A workers have much higher shares of violations than their shares of employment. There are two explanations. First, H-2A employers often violate H-2A regulations and other labor laws. Second, in states where H-2A workers are excluded from unemployment insurance, QCEW employment is lower than actual employment in that commodity.

Both factors are at work in the two NAICS codes with the highest ratios of violation share to employment share. The share of agricultural violations found in NAICS 1124, sheep and goats, is eight times the sheep and goat share of QCEW employment in agriculture. Many sheep and goat farms rely on H-2A workers from Peru and other countries to tend their sheep, often on public lands in the western states. Two associations, Mountain Plains Agricultural Services and the Western Range Association, handle recruitment and paperwork for their member farmers, most of whom employ fewer than five H-2A sheepherders, each of whom is usually provided with a mobile trailer and a dog to tend a flock of 1,000 sheep.

Other NAICS categories with far higher shares of violations than their shares of employment include 1132, Forest Nurseries and Gathering of Forest Products, and 1153, Support Activities for Forestry. Many of the H-2A workers in forestry are employed in reforestation activities, such as planting seedlings for piece-rate wages.

This blog draws from a longer report: