Alternatives to Hand Labor in US Melons

Watermelons, cantaloupes, and honeydews are cucurbits, a plant family that includes cucumbers and pumpkins, squash, and zucchini. Most melons are consumed fresh in summer. Melons are over 90 percent water, and the cost of transporting them long distances can equal production costs, especially in summer when there are many fruits and vegetables to transport.

China produced two-thirds of the world’s watermelons and 54 percent of the world’s cantaloupes in 2017. The US ranks sixth, after Turkey and Iran and other countries, in melon production, and is a net importer of melons; a third of the melons consumed in the US are imported. Half of US melon imports are watermelons primarily from Mexico, and most of the other melon imports are cantaloupes from Guatemala. 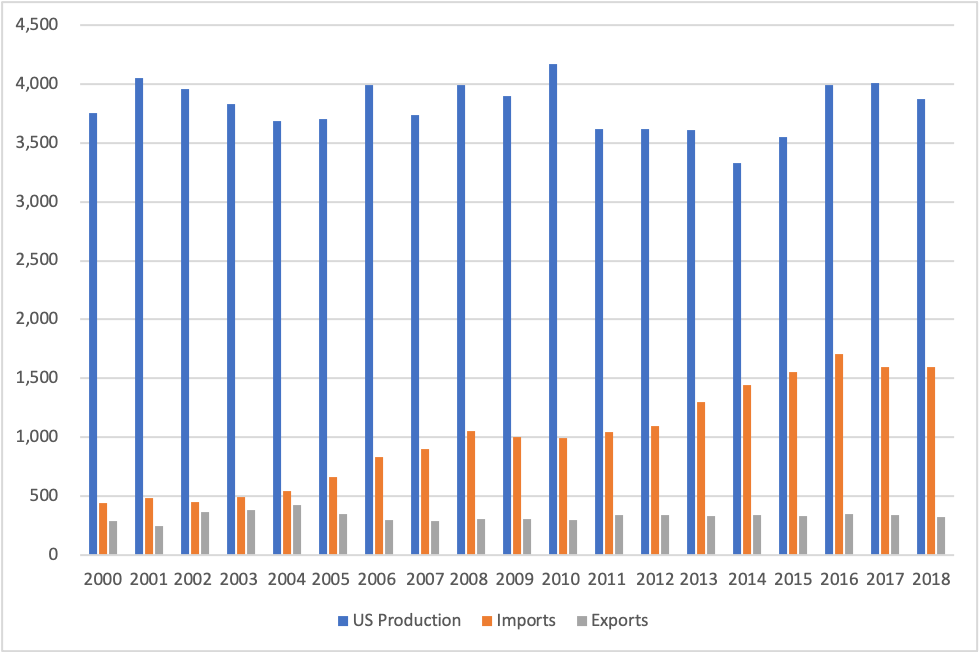 US cantaloupe production is decreasing, down a third over the past two decades to average 1.5 billion pounds a year. Imports are stable at a billion pounds a year, but they are a rising share of decreasing US consumption, 40 percent, while exports are stable at about 10 percent of US cantaloupe production. Mexico accounted for 82 percent of the $319 million of watermelon imports in 2018, and Guatemala accounted for 55 percent of the $227 million worth of cantaloupe imports in 2018. 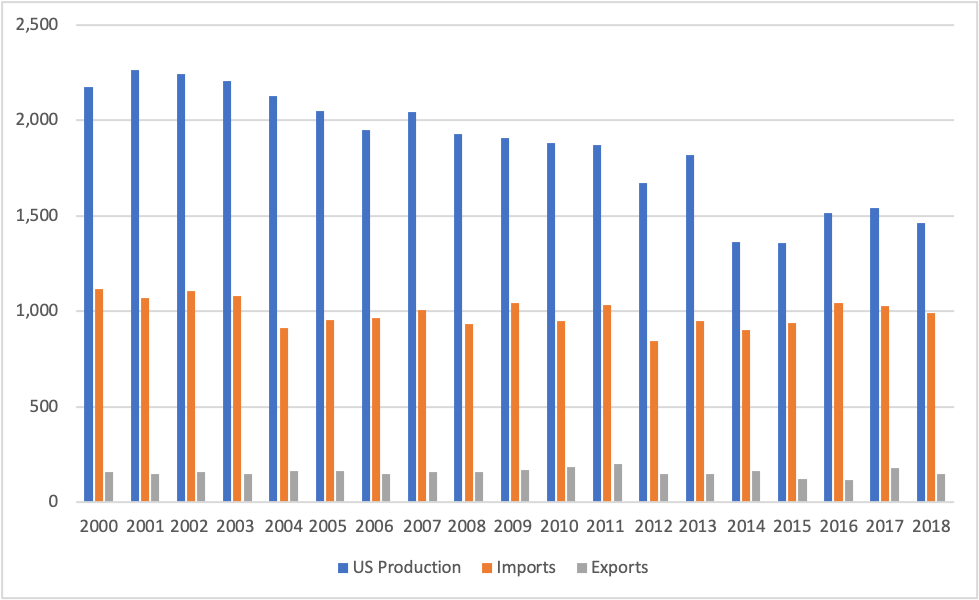 Melons were switched from vegetables to fruits in USDA data after 2011, but remain in NAICS 111219 Other Vegetable and Melon Farming in employment data. USDA includes melon production and trade data in the E Tables of the Fruit and Tree Nuts Yearbook.

When sugar levels near the center of the melon approach 10 percent, cutters walk through fields, identify ripe melons, and use a knife to cut the melons from the stem and roll them into rows with the pale underside up. Loaders pick up melons and throw or hand them to stackers riding on trucks or buses that move slowly through the field and load watermelons five to seven high in the vehicle. Used school buses are lower to the ground than trucks, making them easier for workers to load. Melon trucks and buses often have six inches of straw in the bottom to provide padding, and carpets on the side walls. Melons are taken to packing sheds, where they are sized and packed in heavy cardboard bins for transport to retailers. 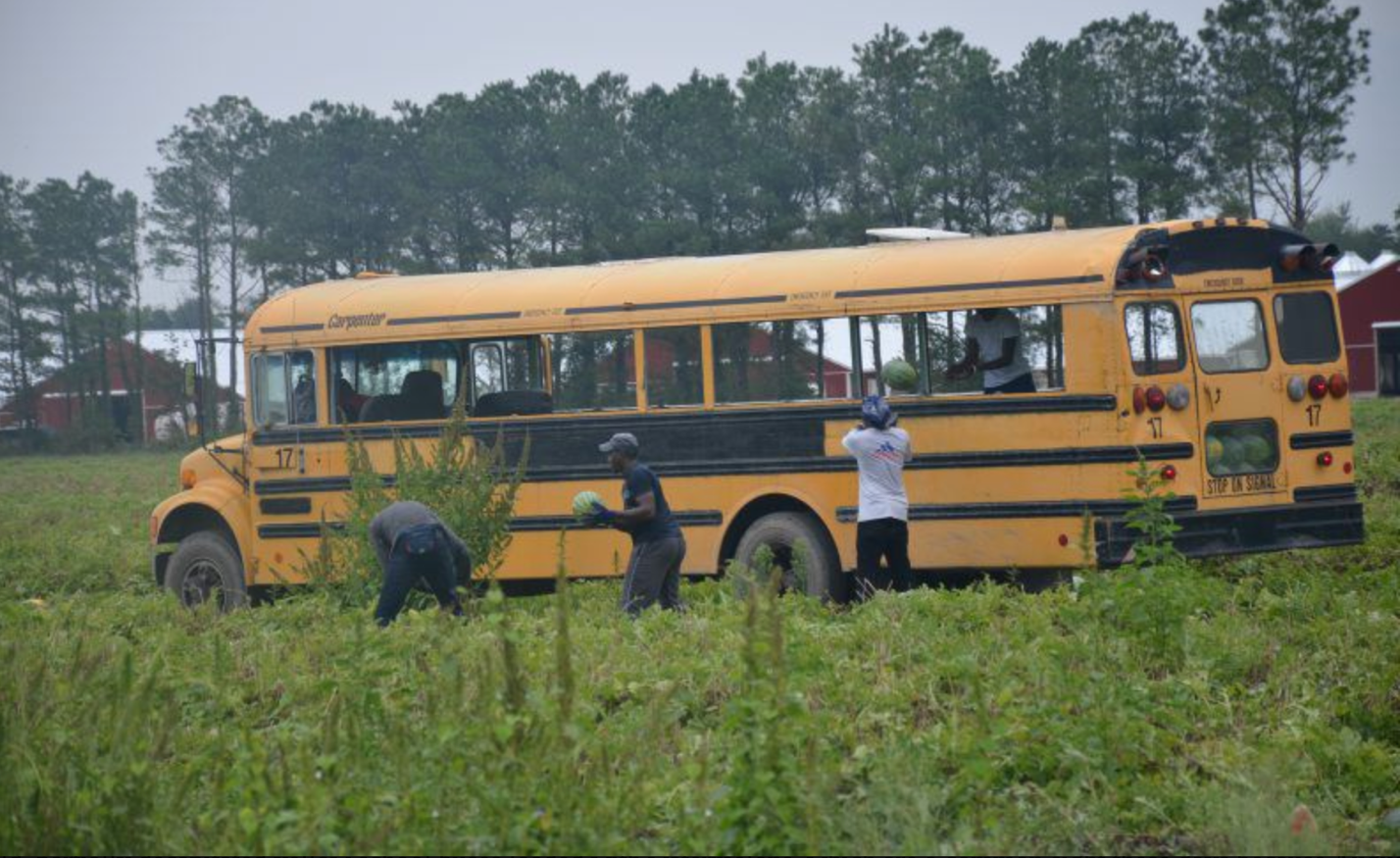 The H-2A job offers of melon farmers guarantee workers at least the hourly AEWR but offer a piece rate to a crew of workers for each bus or truck they load. Typical piece rates in 2020 were $20 to $30 per busload for field cutters who identify and roll ripe melons and $80 to $100 per busload to share between the 10 field loaders who pass ripe watermelons from one worker to another and on to the stackers in the bus or truck.

Cantaloupes are usually planted from seed in raised rows, with drip irrigation installed six inches beneath the surface. Many melon fields are a quarter section, with 150 acres of the 160 acres planted to allow room for equipment. In the past, fields were picked daily or every other day during the two weeks that a field was harvested, but newer varieties such as Harper can be picked in one or two passes through the field.

Cantaloupes are harvested by workers who follow a conveyor belt that moves in front of them through the field. Ripe cantaloupes separate easily from the vine, and workers place them on a belt that conveys them to packers who size and pack melons into 38-pound cartons; the number of melons in the carton varies from nine to 23 depending on their size. Cartons are stacked on pallets, placed in trailers, and the fruit is cooled using forced air. Night harvesting reduces the need to cool harvested fruit. 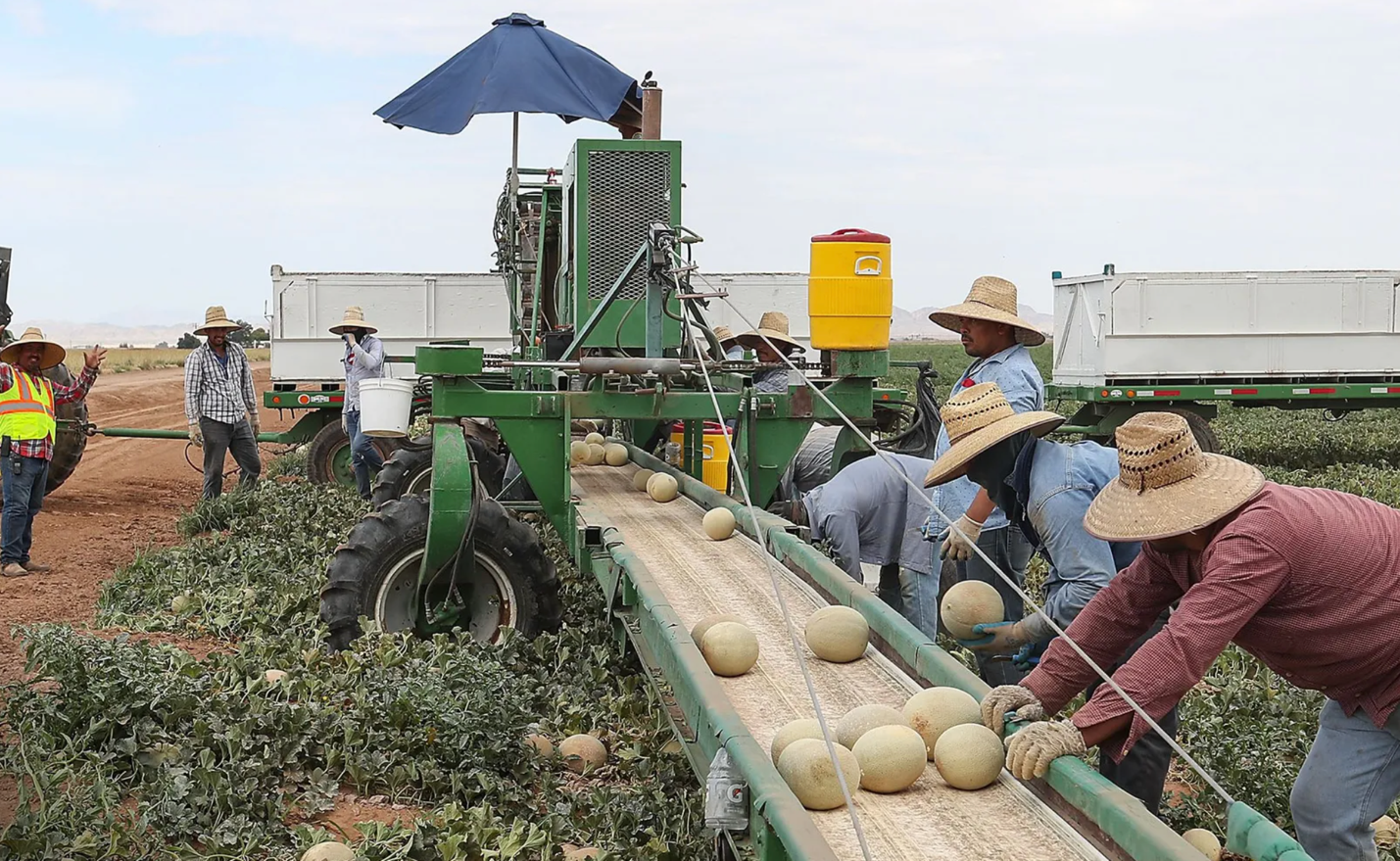 Cantaloupe fields are picked three to five times during the two week period when most melons ripen, down from daily picks over 14 days in the past. A typical harvest crew is 21 people, including nine pickers, five packers, two box makers, three loaders and a driver and a supervisor. The crew picks and packs 200 to 300 cartons an hour or 1,800 to 2,700 cartons in a nine-hour day.

Some melons are shed packed, which means that crews of up to 30 pickers follow longer conveyor belts that extend over more rows and place ripe melons on a belt that conveys the fruit to a truck or gondola traveling alongside the machine. Harvested melons are transported to a packing shed for washing, grading and packing.

Watermelons are the most valuable melon grown in the US, and all are hand harvested, some with the help of mechanical aids, such as conveyor belts that trail behind trucks. Loaders pick up and place ripe watermelons onto the belt for transport to a truck or other packing platform where workers stack watermelons for shed packing or sort and pack them into bins if they are field packing. An experimental machine uses an audio system to locate and identify ripe watermelons, cut them, and roll them into a row for pick up, that is, the machine replaces cutters but not loaders.

California cantaloupe growers confront several challenges. First is increased cantaloupe production in other states that have lower transport costs to consumers. USDA reported that California and Arizona accounted for 80 percent of the 14.6 million hundred weight of US cantaloupes produced in 2018; some growers believe that the California-Arizona share is lower and is declining as newer varieties of cantaloupes that do not require hot and arid climates are planted east of the Mississippi river.

Harvest labor remains a major challenge. A mechanical harvester that picks all of the fruit in one pass through the field means that up to 20 percent of the cantaloupes must be discarded because they are unripe. The machine carries seven sorters to remove unripe melons and dirt clods, reducing labor costs from the usual crew of 30 that follows a conveyor belt and picks melons that are packed in the field.

A machine can harvest 12 to 15 acres a day so that, over a 30-day harvesting period, a 15-acre per day machine could harvest 450 acres and 70 machines could harvest the state’s cantaloupes. The harvest moves around the state, as melons ripen first in southern California, then the San Joaquin Valley, and finally the Sacramento Valley, so that machines could follow the harvest.

The melon harvester was developed by a large grower, which highlights several issues common to mechanizing specialty crops, including the need for uniformly ripening crops that can withstand machine handling. Melons that were bred for yield and flavor, disease resistance, and shelf life may have to be modified for optimal machine harvesting, a process that can take years and must gain consumer acceptance. There may be trade offs between desirable traits, as when a melon sturdy enough for machine harvesting may have less flavor.

The market for melon harvesters is small, which makes it hard to attract significant investments from private machinery firms, prompting growers to design and refine their own machines. Finally, there is no coordinating mechanism to link plant breeders and machinery companies to facilitate cooperation between plant scientists and engineers and with the entire supply chain to promote harvest mechanization, as helped to mechanize the harvesting of processing tomatoes in the 1960s.

The second challenge is rising import competition from Central America, where labor costs are lower, costs of shipping by sea are low, and trucking from ports such as Miami and New Orleans to supermarkets that serve most Americans is cheaper. New varieties are extending the melon import season from winter into spring and fall.

US cantaloupe production may continue to shrink as imports rise, further discouraging investment in machines. The US is the only high-wage country among the world’s leading producers of cantaloupes, after China, Turkey, Iran, Egypt, India, and Kazakhstan, so that a US harvester may not generate sufficient sales at home and abroad to justify the necessary investment. Rising import competition from Central America could intensify due to lower labor costs and cheaper shipping by sea to ports such as Miami and New Orleans. New varieties are extending the melon import season from winter into spring and fall.

For these reasons, most US watermelons, cantaloupes, and honeydews are likely to continue to be hand harvested for the next decade, albeit with ever more sophisticated mechanical aids that make hand workers more efficient and productive. The alternative would be is a once-over harvester that accepts lower marketable yields in exchange for lower harvest costs.