MIT: The Work of the Future

An MIT Task Force in November 2020 released a report, The Work of the Future, that emphasized the divergence between rapidly rising US productivity growth and slower US wage growth since 1980. Why did wage growth slow while productivity rose? The report points to weaker unions, a stagnant federal minimum wage, and more free trade agreements, especially with China and Mexico, that put US workers in more direct competition with workers in other countries.

The MIT report urged continued government investment in innovation to raise productivity as well as changes to labor market institutions such as higher minimum wages and stronger unions and lifelong learning so that workers benefit from productivity increasing artificial intelligence (AI) and robotics.

Labor Market Trends. The MIT report reviews US labor market trends to emphasize the decline in the share of men with paid employment (69 percent in 2015) and the rise in the share of women with paid employment (57 percent). The second theme is job creation and destruction: 60 percent of US jobs in 2018 did not exist in 1940. Farming and mining accounted for 18 percent of jobs in 1940 and two percent in 2018, and 51 percent of the jobs in farming and mining in 2018 did not exist in 1940. 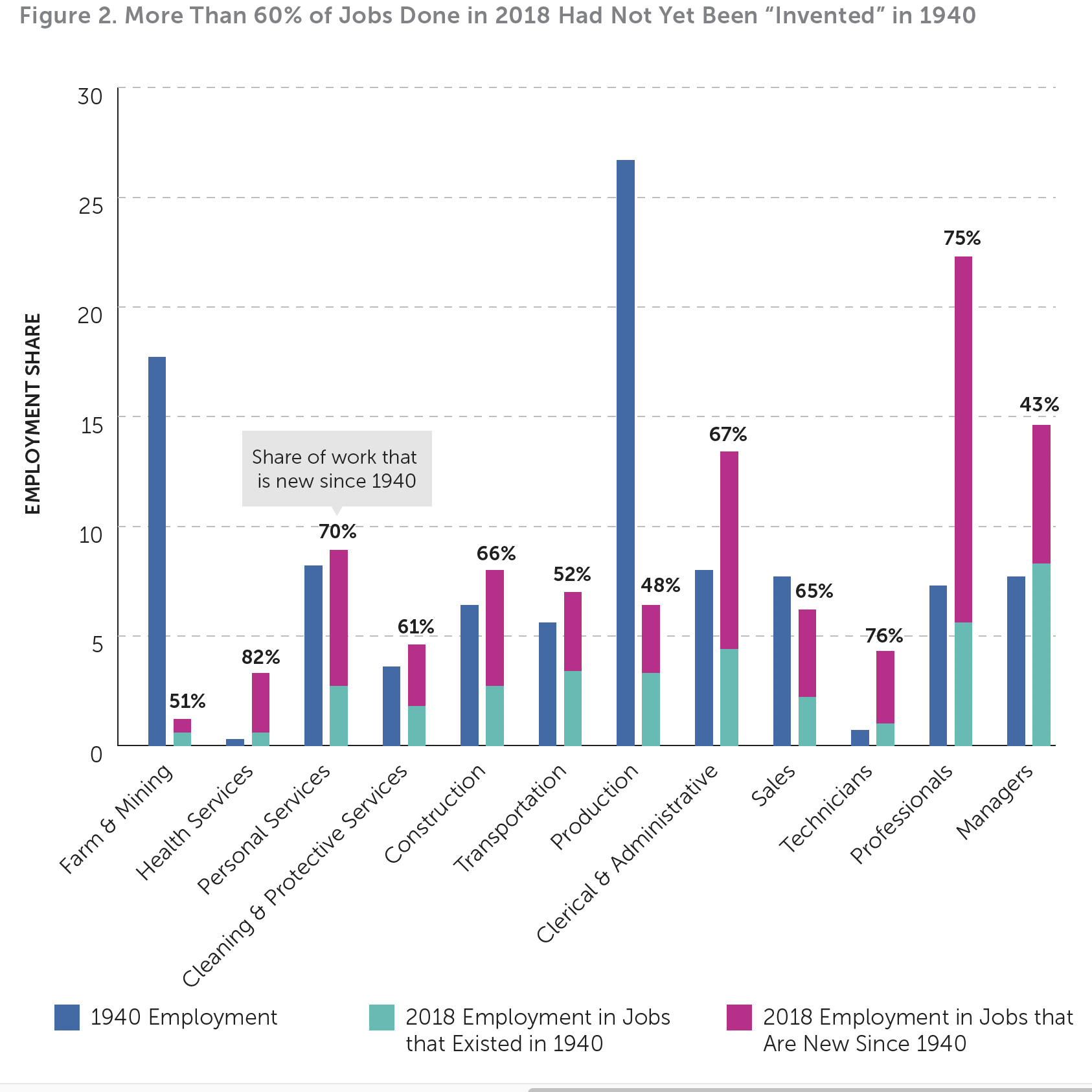 The MIT report argues that new technologies normally create more new jobs than they eliminate. However, the creation and destruction of jobs leads to winners and losers, and the US economic system allows a handful of winners to obtain most of the gains of new technologies. There are many reasons why the rewards of innovation accrue mostly to the better off, including skill-biased technical change that increases the demand for well-educated workers, free trade and globalization that pits lower-skilled US workers against lower-wage workers in other countries, and fewer unions and stagnant federal minimum wages to protect US workers. 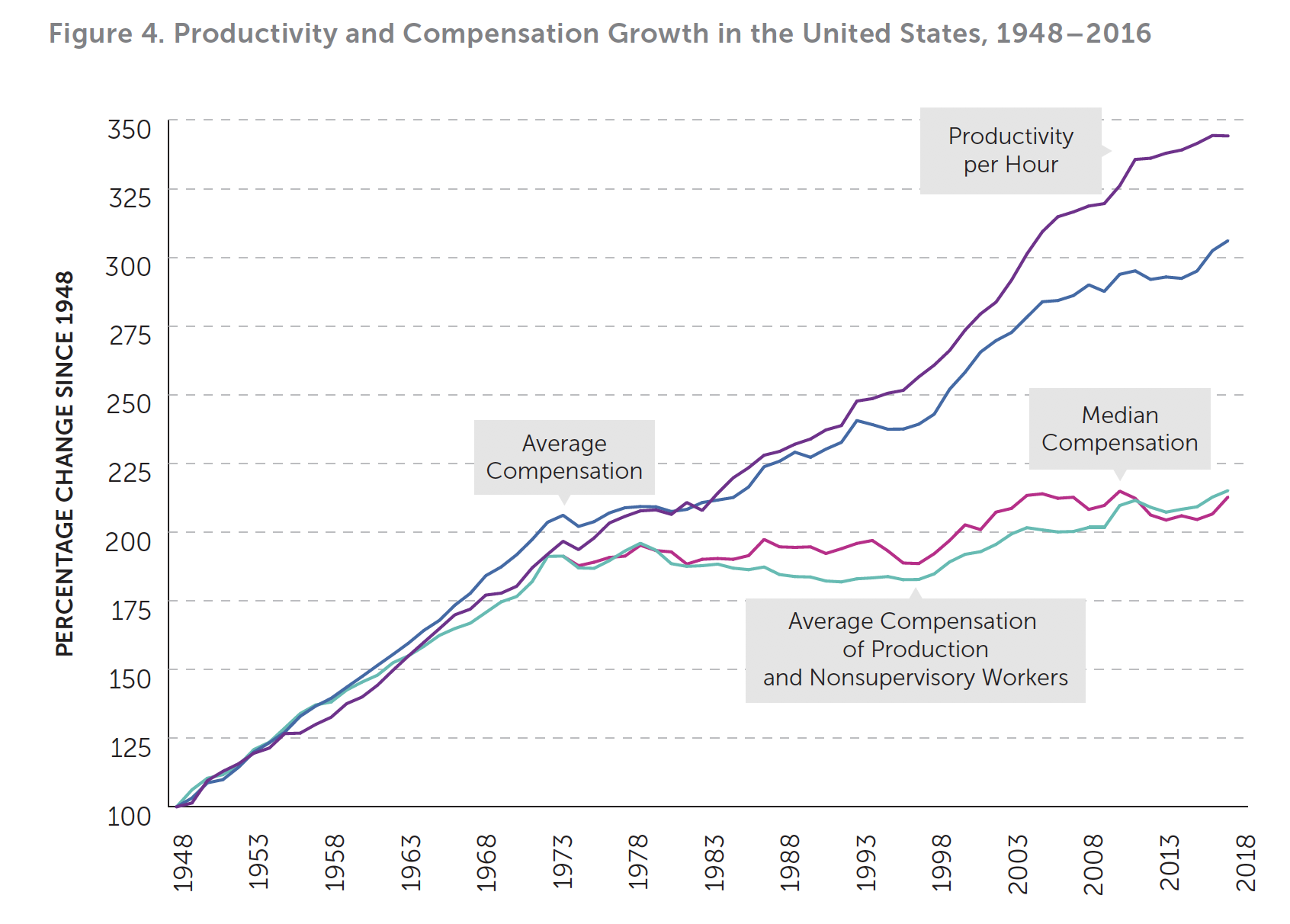 The real wages of men without high school diplomas, on the other hand, rose about 30 percent between 1960 and 1975 and then fell below 1960 levels during the 2008-09 recession. By 2017, the real wages of low-skilled men were about 10 percent higher than in 1960. The real wages of women without high school diplomas rose 25 percent between 1960 and 1975, were up 10 percent by 1990, and were 35 percent higher in 2017 than in1960. One reason that the wages of women without diplomas rose faster than wages for similar men is that a higher share of the women are employed in service jobs in the public sector or funded with taxes.

The report makes two important points about the changing structure of jobs. First, the number of jobs at both the top and bottom of the job ladder is growing, while the number of jobs in the middle of the wage distribution is shrinking, highlighting the polarization of jobs or the demise of middle-class jobs.

Between 1980 and 2015, job growth was concentrated among low- and high-paid jobs 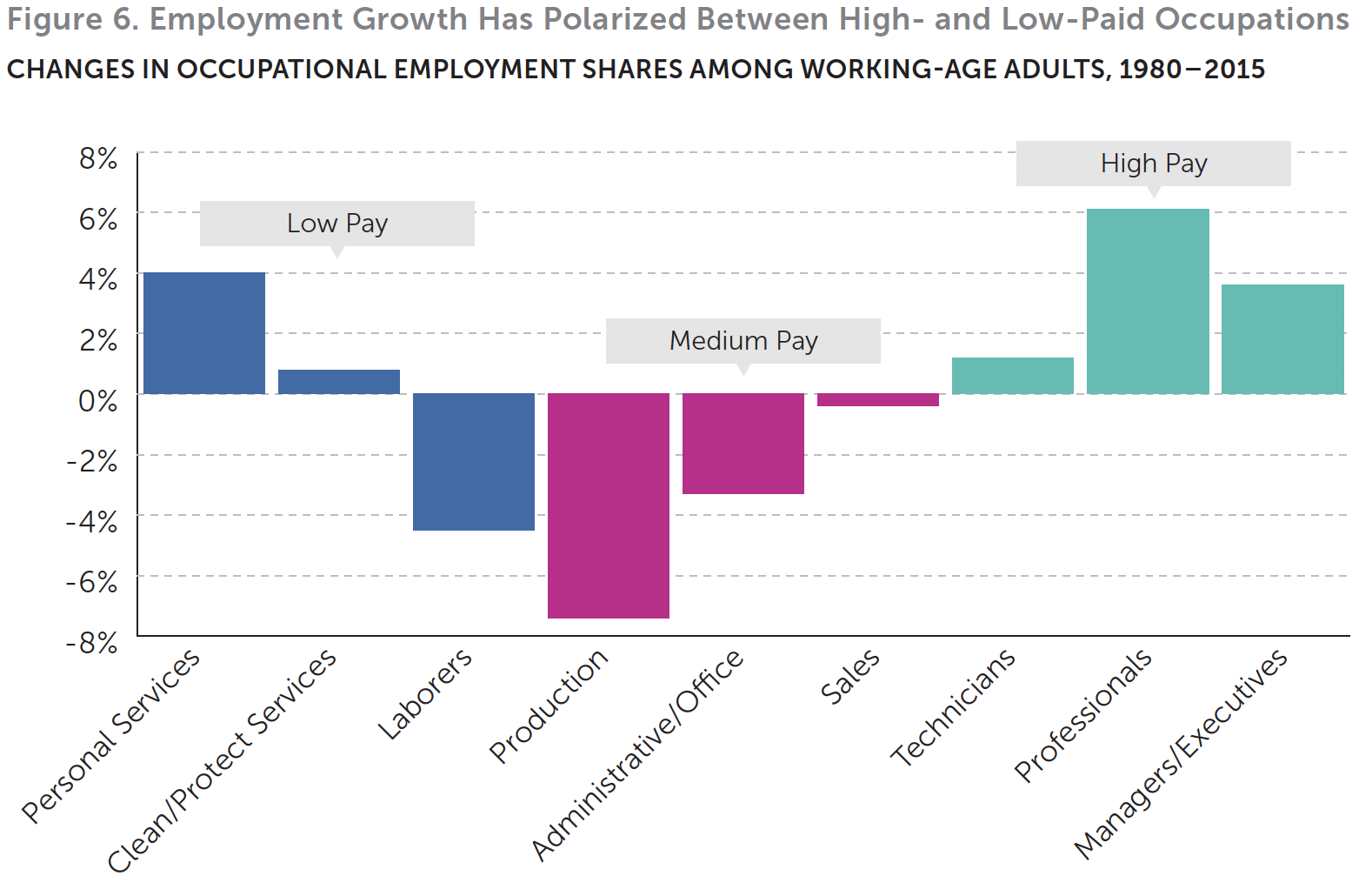 Low-skill workers in the US, Latin America, and Southern Europe earn less than similar workers in Western Europe 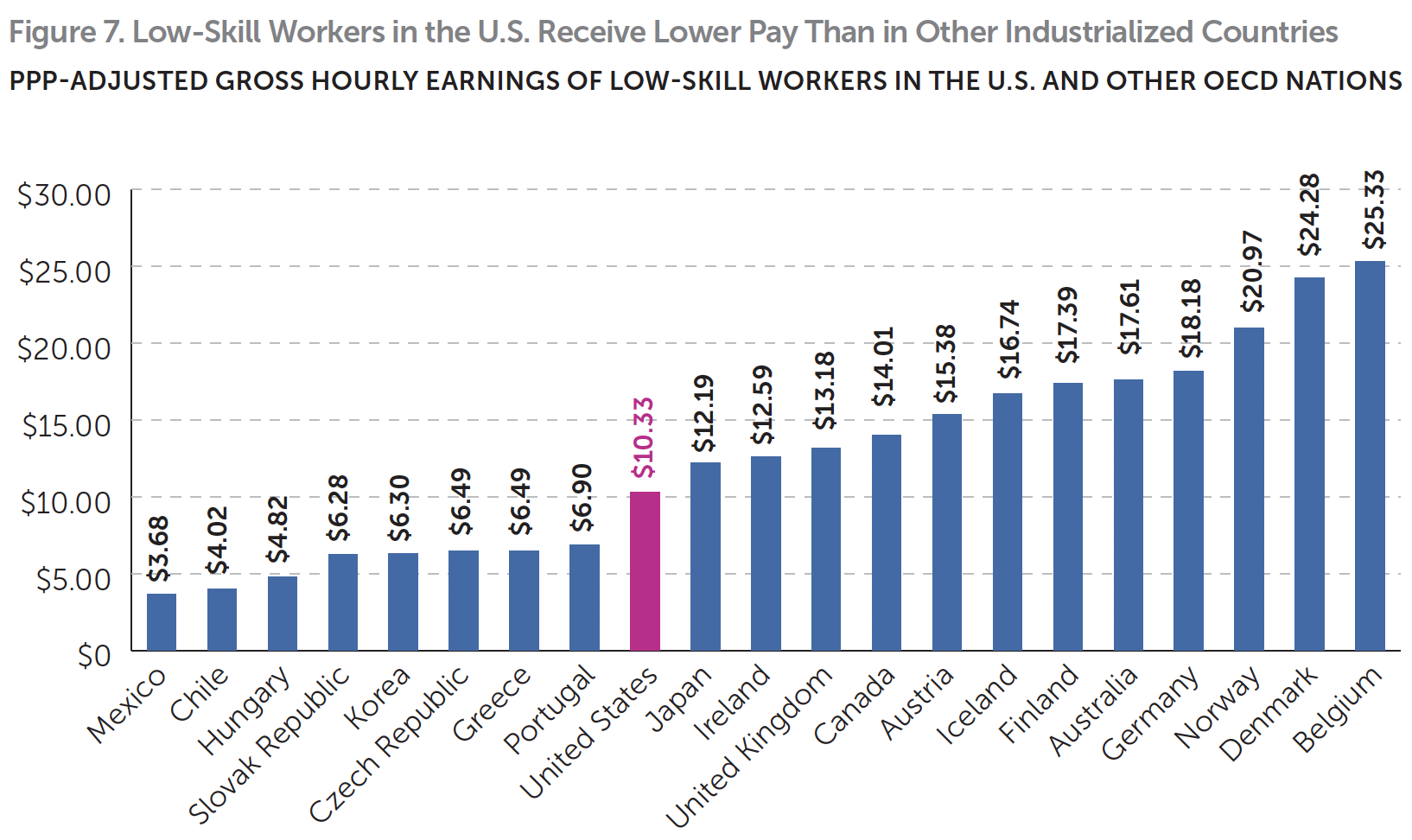 Technology. The chapter on technology and innovation opens with three observations. First, the development of AI and robotics is gradual, since time is required to develop and teach machines to perform tasks and replace workers in performing business processes and manufacturing products. Second, robotics and AI can augment jobs, as with co-bots that make work easier for humans in warehouses and factories. Third, business organizations influence how innovation is introduced and its effects on productivity, workers, and profits.

AI is most efficient when it tackles a discrete task and its performance improves over time. One example is chat bots that handle simple customer questions, freeing up workers for more complex questions. Insurance firms use AI to review thousands of legal bills, since software can detect anomalies missed by human auditors. In health care, electronic records and best-practice software have so far not increased productivity, in part because health-care providers are not rewarded for productivity-enhancing changes.

The logistics industry, which uses robots and AI in warehouses, has been transformed from delivering goods in bulk to retail stores to delivering goods to consumers in smaller packages, increasing the number of jobs in logistics and eliminating jobs in retail stores. The AI dream is for a consumer to order online, a robot-controlled warehouse to fulfill the order, and an autonomous vehicle to deliver the item.

Manufacturing could be further transformed by AI and robots, eliminating more middle-class jobs. 3D printing or additive manufacturing combines hardware, software, and materials to create objects in new ways, as when machine tools are built up layer by layer rather than by grinding down a chunk of steel to create the finished product.

Policy. The chapter on how to deal with the new future of work argues for the Scandinavian approach of supporting workers rather than jobs, that is, allow employers to easily hire and fire, but ensure that workers who lose their jobs are protected by a strong safety net. Governments should offer lifelong learning opportunities, improve the quality of low-level jobs, and tax wages and investment equally.

Most US employers are reluctant to invest in training their employees because their employees may go elsewhere. Community colleges that enroll a third of the 20 million US students in higher education, many of whom are older than the traditional college-leaving age of 22, are the keystone to industry-relevant training. The most successful programs have direct ties to employers who often provide equipment and teachers to community colleges and hire graduates of their training programs. The report praises the German dual work-and-learn approach to training and certifying skills.

The report urges improved jobs for low-skill workers by modifying unemployment insurance, raising the federal minimum wage, and giving workers a voice in management. Less than 30 percent of jobless workers receive UI benefits, in part because more workers are self-employed, as with gig workers who are independent contractors rather than employees. Many states have restricted access to UI benefits, so that in southeastern states such as FL and NC, fewer than 10 percent of jobless workers received UI benefits in 2019.

In recent years, fewer than 30% of the unemployed receive UI benefits 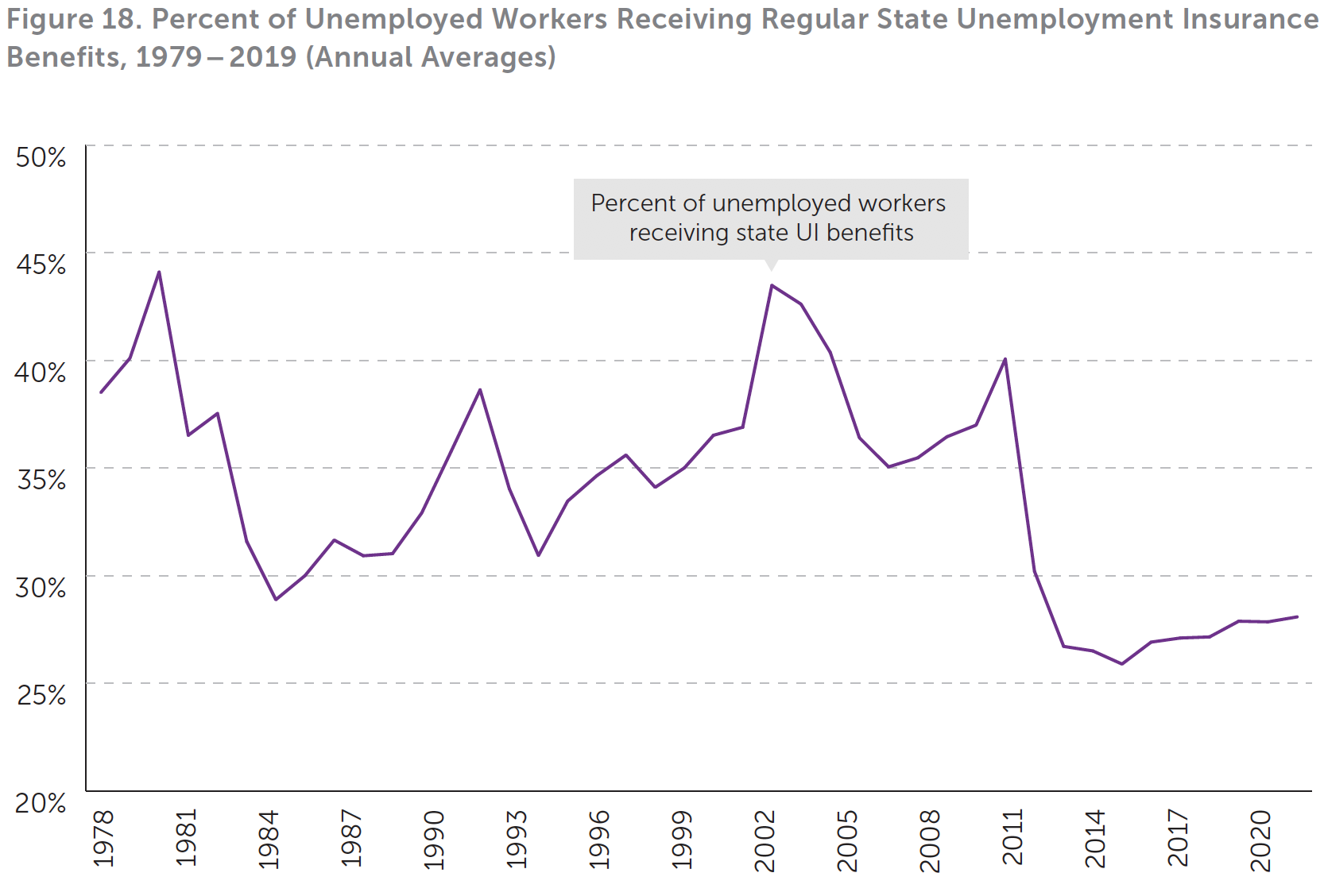 The report urges a higher federal minimum wage and an explicit worker voice in management to reduce opposition to automation and globalization. So-called shareholder capitalism has made profits the number one objective of managers, prompting quick lay offs of workers in recession. New union and non-union mechanisms that allow workers to interact with managers could help firms to take a longer view that increases worker protections.

The report ends with a long list of general and specific policy recommendations, from increasing public and private investment in worker training to improving the quality of low-skill jobs by raising the minimum wage and expanding UI benefits. The project’s web site lists 20 policy briefs that were prepared for the report. The WP by Handel includes Table III.4 that shows a quarter of workers in industrial countries performed hard physical work, including 24 percent of US workers, 18 percent of Canadian workers, and 35 percent of Korean workers.

Autor, Davis, David Mindell, Elisabeth Reynolds. 2020. The Work of the Future: Building Better Jobs in an Age of Intelligent Machines.