International labor migration involves people moving across national borders, leaving one country to work in another. There are many reasons for migration, and a major reason is economic, to earn higher wages and enjoy more opportunities for upward mobility.

There were 272 million international migrants in 2019, defined by the UN as persons who are outside their country of birth a year or more. Over 60 percent of the world’s migrants were in the 30+ rich or industrial countries, since most migrants move from poorer to richer areas. The same poor-to-rich movement is evident in migration between developing countries, as migrants move from Indonesia to Malaysia, other African countries to South Africa, or Nicaragua to Costa Rica.

What are the effects of labor migration on the economies of migrant-receiving countries? The US has about 50 million migrants (the UN considers Puerto Ricans who move to the mainland to be international migrants) or almost 20 percent of the world’s total, and has been the focus of most studies of the economic effects of migrant workers. Immigrants add to the supply of labor and, with the demand for labor fixed, immigration means more employment and lower wages.

The presence of 15 million foreign-born workers creates rectangles C and D and triangle B. Rectangle C is the transfer of wages from US workers to profits, since wages are $12.60 an hour rather than $13 with immigration, while rectangle D represents the wages earned by migrants. The net increase in national income due to immigration is triangle B, which was estimated to be $8 billion in 1996. Admissionsts touted the plus $8 billion economic benefit of immigration, while restrictionists emphasized that the US economy expanded by $8 billion every two weeks in the mid-1990s. 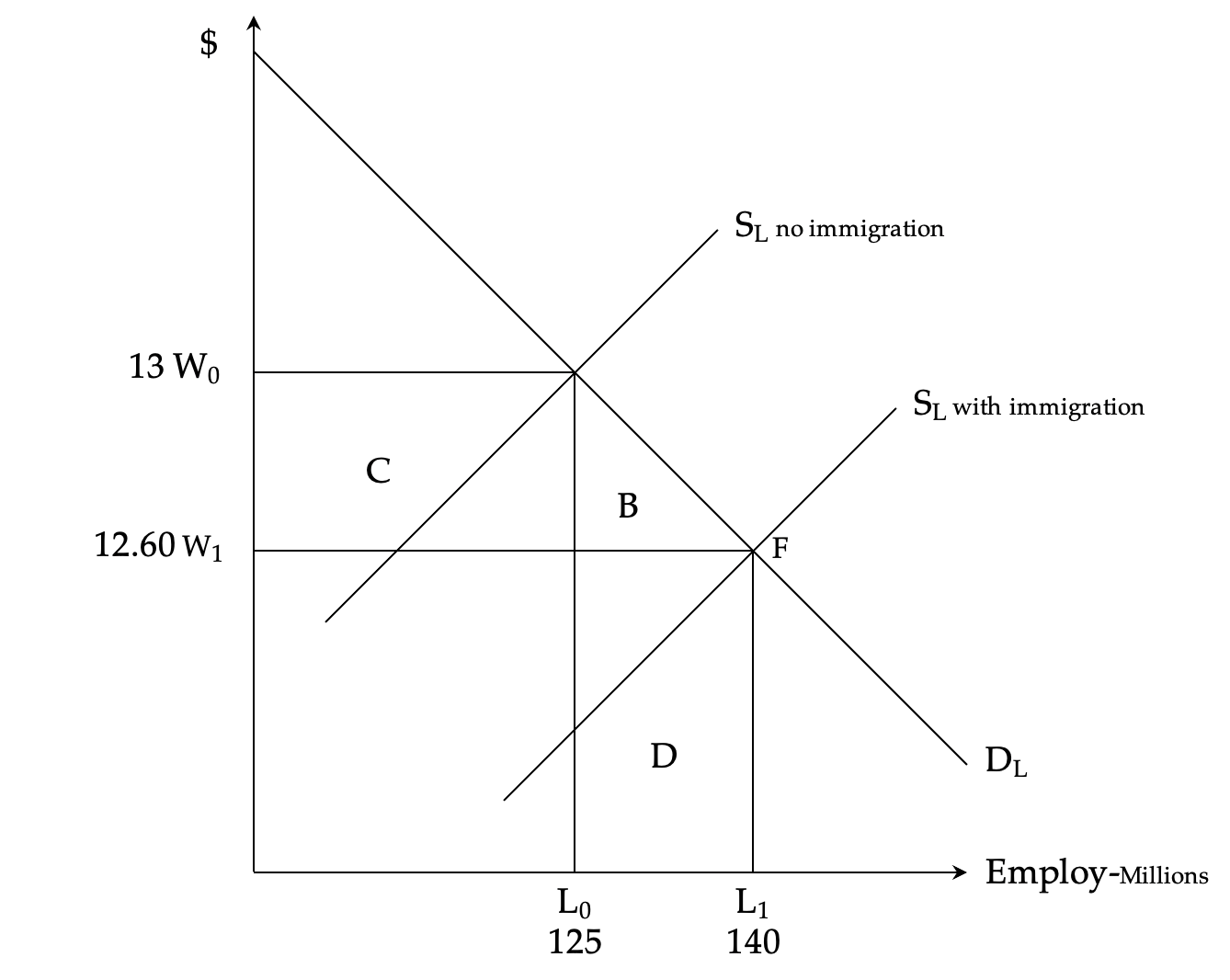 The conclusion of macroeconomic studies is that immigration raises employment and profits, migrants gain with higher US wages, and US workers lose with lower wages. Since immigrants dribble into a country over time rather than arrive all at once, the wage depression may appear as a slower increase in wages rather than a measurable decrease.

What are the effects of migrant workers on similar US workers? US workers, when grouped by the best single indicator of income, years of schooling, have something of a diamond shape, since 60 percent of US workers have high school diplomas but not college degrees. Foreign-born workers have more of a barbell shape. Almost 28 percent of migrant workers did not complete high school in 2015, while 12 percent had graduate degrees. 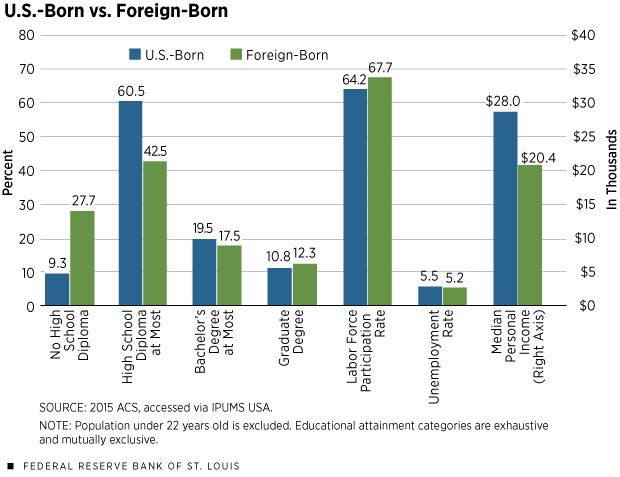 There are several ways to study the effects of migrant on similar US workers. Case studies of particular labor markets show how competition between employers who hire different types of workers can result in migrants replacing US workers. In southern California, farm labor contractors who hired unauthorized workers replaced labor cooperatives that hired Mexican Americans to pick citrus after the US workers went on strike in the early 1980s for higher wages and benefits. The younger unauthorized workers achieved the same hourly earnings and were less interested in the pension and other benefits that added 40 percent to labor costs at the coops. Growers quit the coops and turned to FLCs to get their lemons and oranges harvested, and the unionized coops went out of business.

Similar stories played out in janitorial services. Instead of hiring janitors directly, banks, supermarkets, and office buildings turned to janitorial service firms that relied on unauthorized workers. Hispanic immigrants soon replaced US-born janitors, many of whom were Black. Justice for Janitors campaigns in the 1990s successfully negotiated contracts for some of these migrant janitors in the 1990s.

The first and simplest approach is to compare average hourly wages and the share of migrants in city work forces, so called spatial correlation. The positive line in the figure below shows that the average hourly earnings of workers with a high school diploma or less are higher in cities with a higher share of migrant workers. This does not mean that a higher share of migrants in a city causes higher wages. Instead, it is more likely that high wages attract migrants to a city, which is why the migrant share of workers is higher in higher-wage New York and Los Angeles than in lower-wage Cincinnati and Memphis. 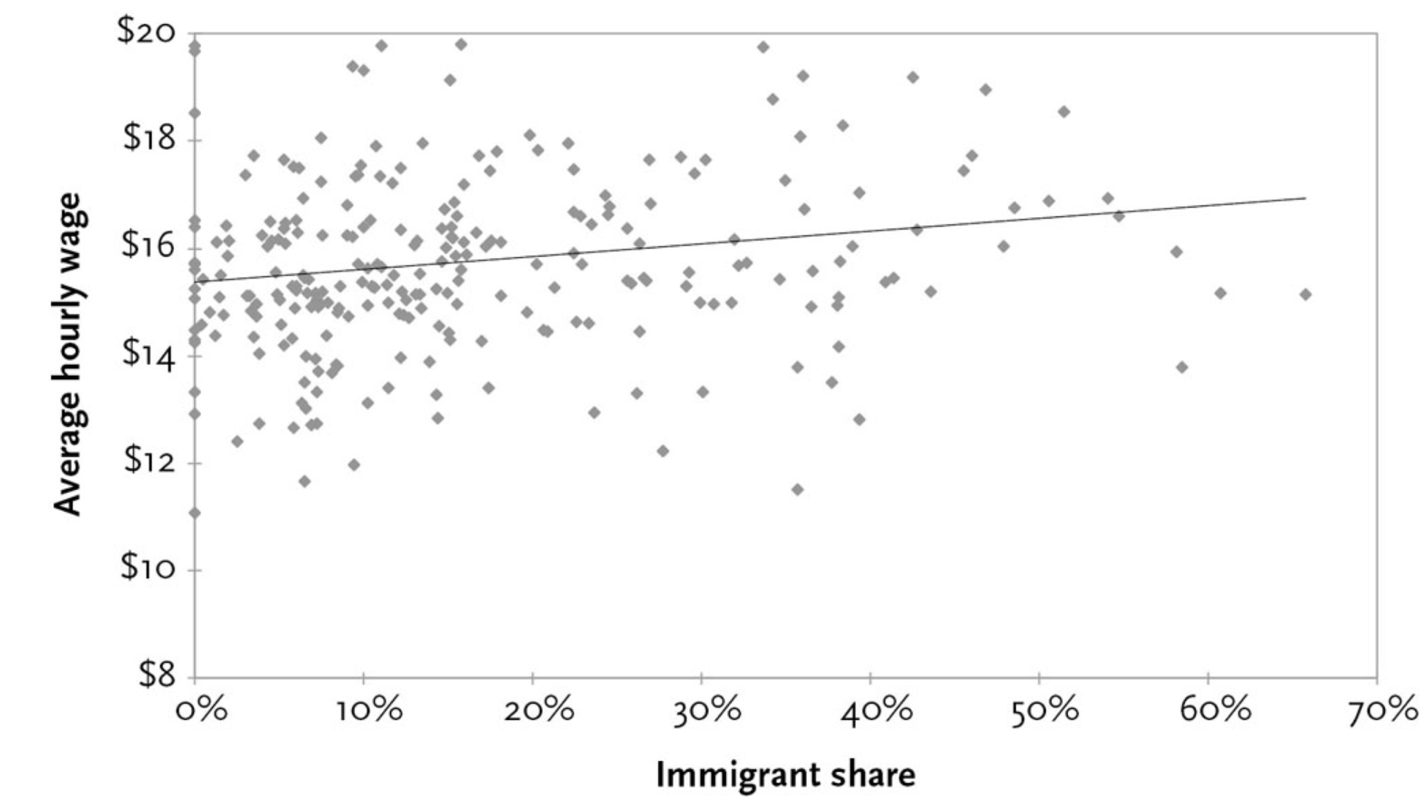 A second approach is to study unexpected events, so-called natural experiments. The most studied event was the arrival of 125,000 Cuban Marielitos in south Florida in 1980. Many Marielitos settled in Miami, increasing the area’s labor force by seven percent.

Over 125,000 Cuban Marielitos arrived in Florida between April and October 1980 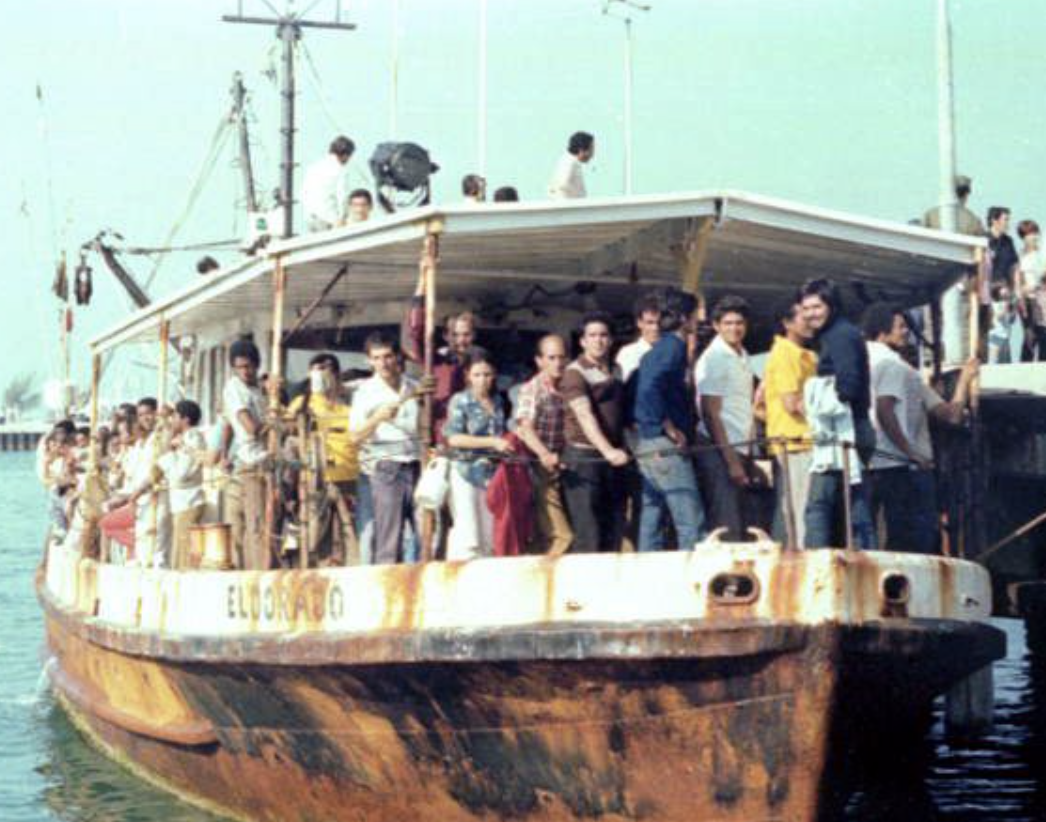 Another way of looking for the impacts of migrant on US workers is to divide both migrant and US workers into age and experience cells that group together workers who are substitutes for each other and look for the impacts of migrants on similar US workers within each cell. This means that 25-to-30 year old migrant and US-born workers with less than a high school diploma are in one cell, while 35-to-40 year olds with college degrees are in another.

Borjas divided workers into five education cells, high school dropouts, high school graduates, those with some college, those with a college degree, and those with more than a college degree. He created eight age or experience cells, for a total of 8x5 = 40 cells, and examined the change in the wage of migrant and US born workers in each cell over the preceding decade using the six decennial censuses between 1960 and 2010, for a total of 240 data points.

Each dot in the figure below is one of these 240 data points, and the negative line shows that a larger share of immigrant workers in a cell is associated with a smaller increase in weekly earnings for US workers in the cell.

The Y-axis measures the change in real weekly wages in a cell over the previous decade, and the X-axis measures the share of migrant workers in each cell. Borjas found that 10 percent more migrant workers in a cell means a decline up to nine percent in wage growth for US workers with little education. Studies in other countries that put migrant and native workers in age-education cells find similar results, that is, a higher share of migrants means slower growing wages for low-skilled native workers.

Do immigrants pay their way? One of the most contentious debates about immigration is whether the taxes paid by immigrants exceed the value of the tax-supported services they consume.

Immigrants should pay their way because most are in their prime working and thus tax-paying years. The taxes paid-benefits received balance for all people varies over a person’s lifetime. Children and the elderly consume tax-supported services, while employed workers pay most of the taxes.

There is an important difference between federal and state tax systems. The major tax paid by low US earners is the social security tax collected by the federal government to support the elderly, while the major taxes collected by state governments are income and sales taxes that are spent to provide education and health care to children.

The figure below, from a NAS study that used data for 2013, found that immigrants paid their way for the federal government but not for state and local governments. However, 2nd and 3rd generation children of immigrants do not pay their way at federal or state levels because of government deficits.

Immigrants pay more in federal taxes than they receive in tax-supported services, but have a deficit with state and local governments 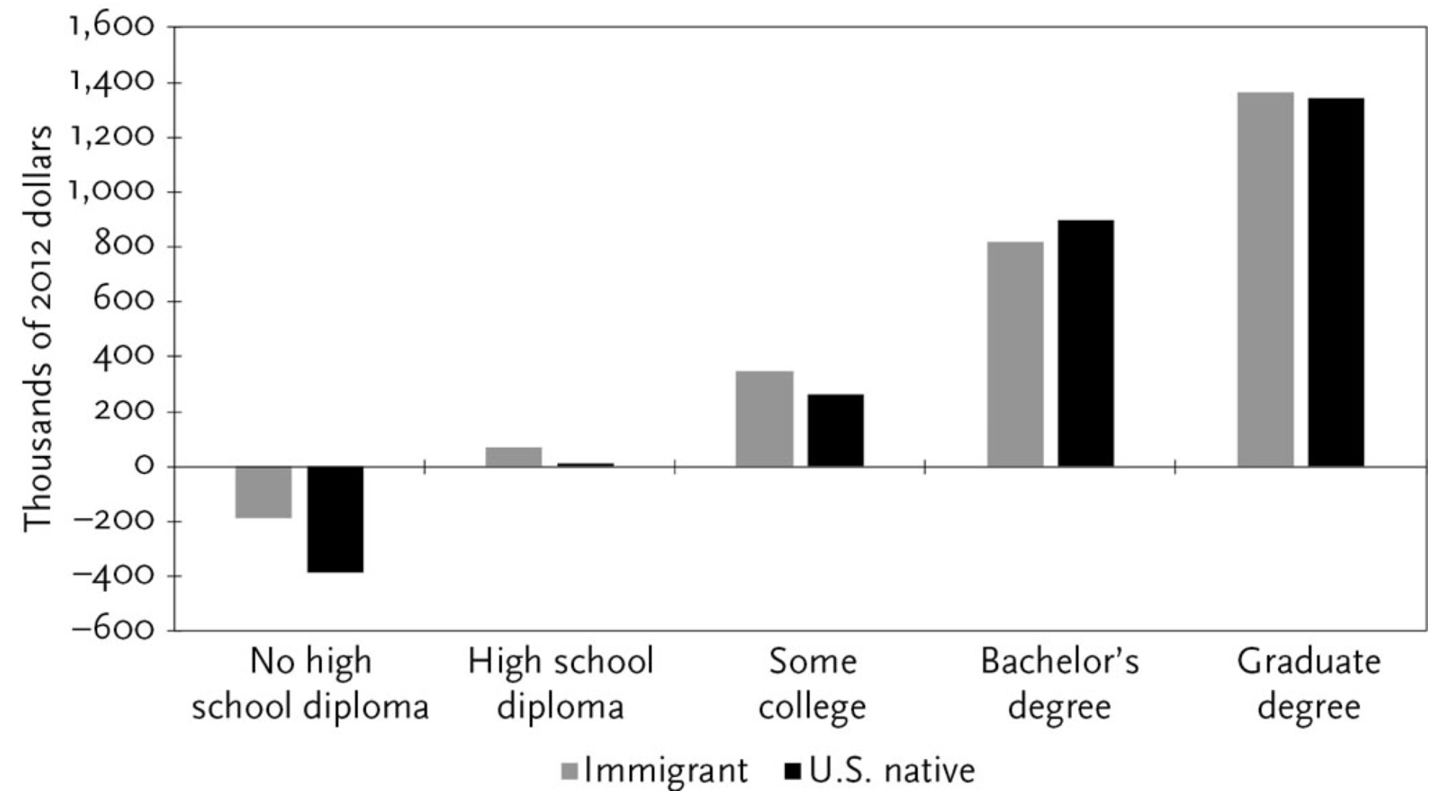 What do economic studies of the impacts of migrant workers suggest for migration policy making? If the purpose of immigration policy is to benefit natives by reducing their tax burden, migration policy should favor the admission of young and well educated immigrants who know the host country language and have jobs waiting for them. This is the migration policy of Australia and Canada, whose migration selection systems award points for personal characteristics that are associated with successful economic integration.

If the purpose of migration policy is to benefit foreigners seeking higher incomes or safety from persecution, policy may favor the admission of low-skilled foreigners, since they gain the greatest percentage increases in their earnings by crossing national borders, as with a rural Mexican earns ten times more in the US. Similarly, refugees escaping persecution may be costly to integrate if they had no time to prepare to begin anew in a safer country, but their need for protection may justify their admission and integration.

Migration policy often has multiple goals, some of which contradict each other. The US government often asserts that immigration is in the national interest and benefits newcomers and natives. However, even if there is a net macroeconomic benefit of immigration, some natives may be hurt and, as with similar justifications for freer trade generating net economic benefits, losses may be concentrated among those who lose their jobs or experience slower rising wages.