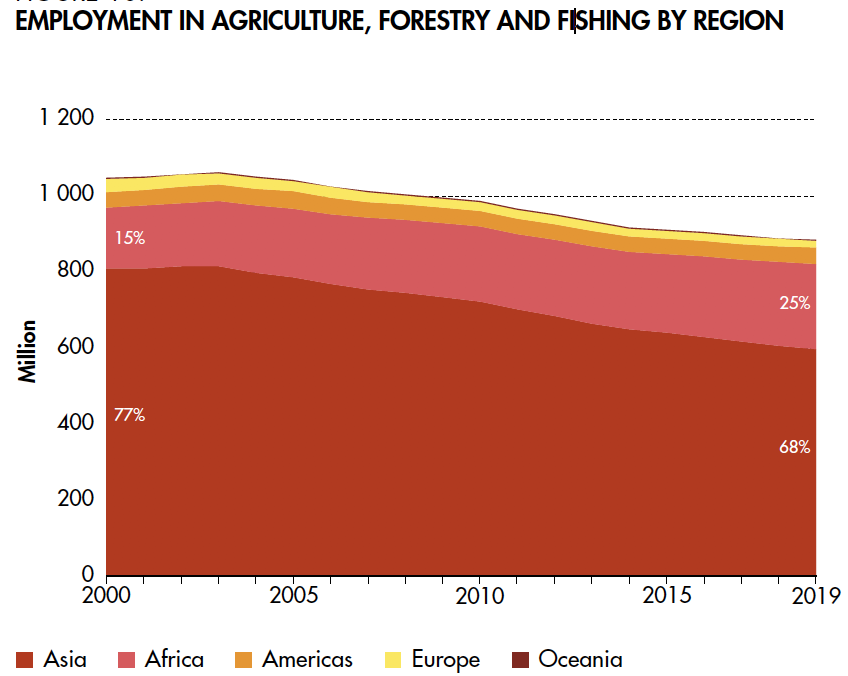 Women were 37% of people employed in ag globally, but over 50% in some countries 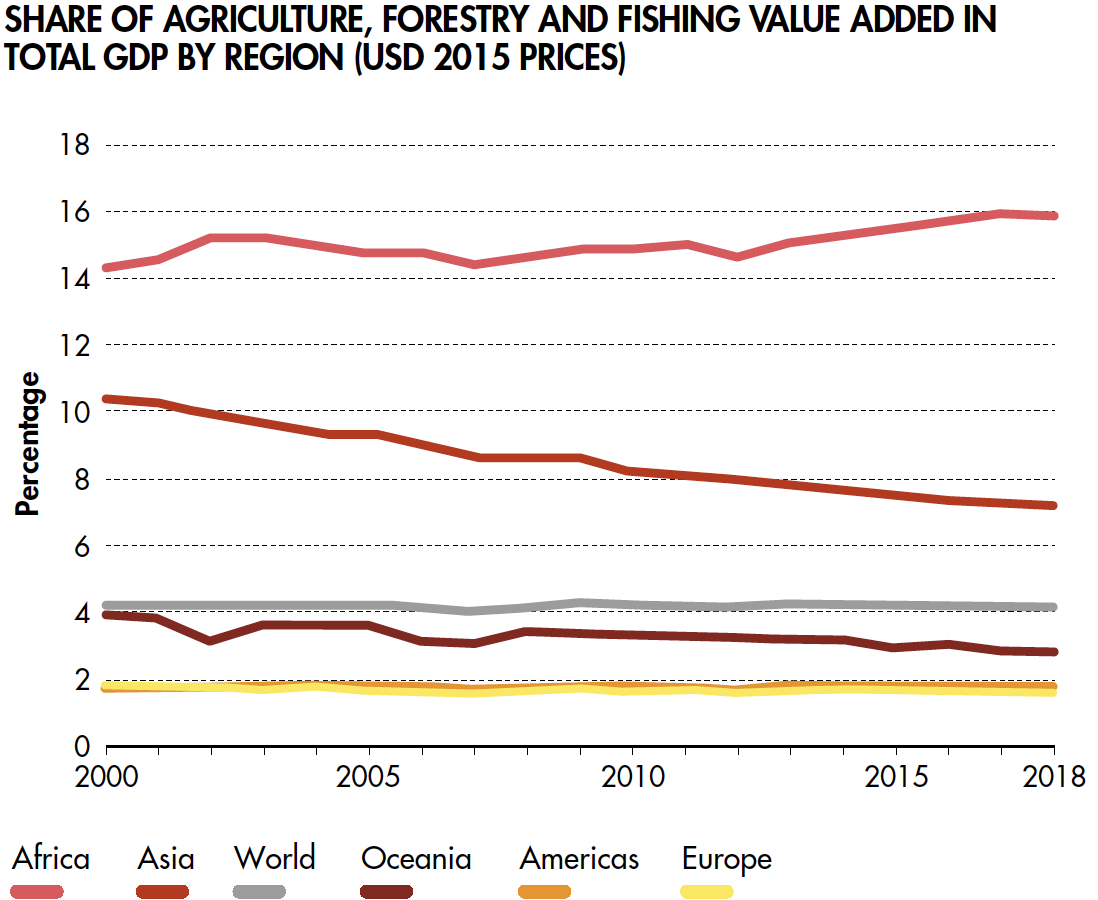 Value-added subtracts the value of purchased farm inputs from farm cash receipts, so the gap between farm cash receipts and value added is smaller in developing countries where farmers purchase fewer seeds, chemicals, and fertilizers. China accounted for $1.1 trillion in agricultural value added, India $400 billion, and the US $184 billion.

The Big 4 crops, sugar cane (21 percent of the Big 4 crop tonnage), corn or maize (13 percent), rice (nine percent), and wheat (eight percent) accounted for half of the 9.1 billion tons of primary crops in 2018. Fruits and vegetables were about 20 percent of global crop production in 2018.

Sugar cane, corn, wheat, and rice accounted for half of primary crop production in 2018

Many countries produce the Big 4 crops, but the top three countries account for half or more of the total production of sugarcane, corn, rice, and soybeans. Brazil was the top producer of sugar cane (40 percent of global tonnage), the US of corn and soybeans (35 percent), and China led in rice (25 percent). 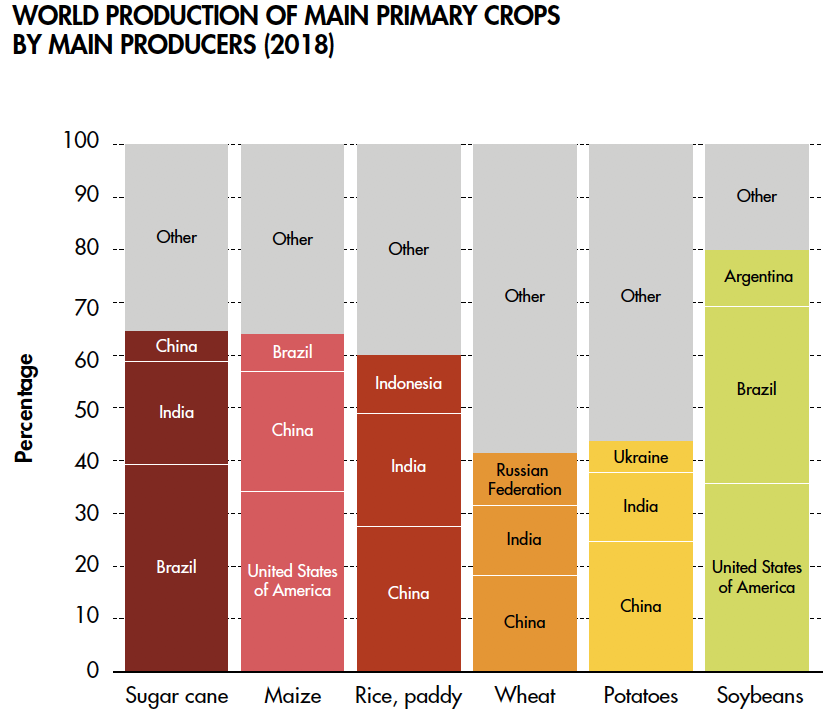 World meat production was 342 million tons or about 90 pounds per person in 2018. About 90 percent of this meat was pork (35 percent), chicken (33 percent), and beef (20 percent). China is the leading producer of pork, while the US leads in chicken and beef production, followed closely by Brazil. 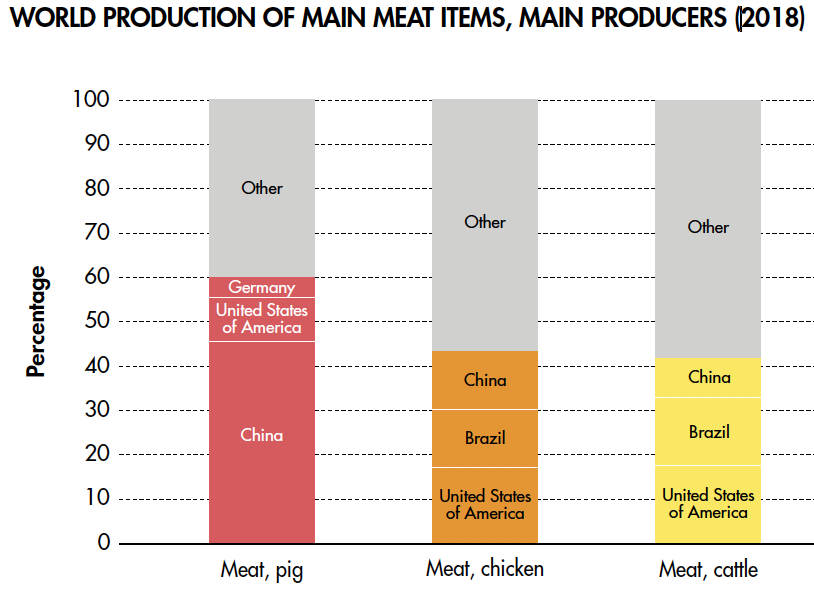 World fish production totaled 180 million tons worth $400 billion in 2018, including 54 percent wild or caught fish and 46 percent farmed fish. China was the leading producer of both caught and farmed fish.

China accounts for over a third of fish production, including over half of farmed fish 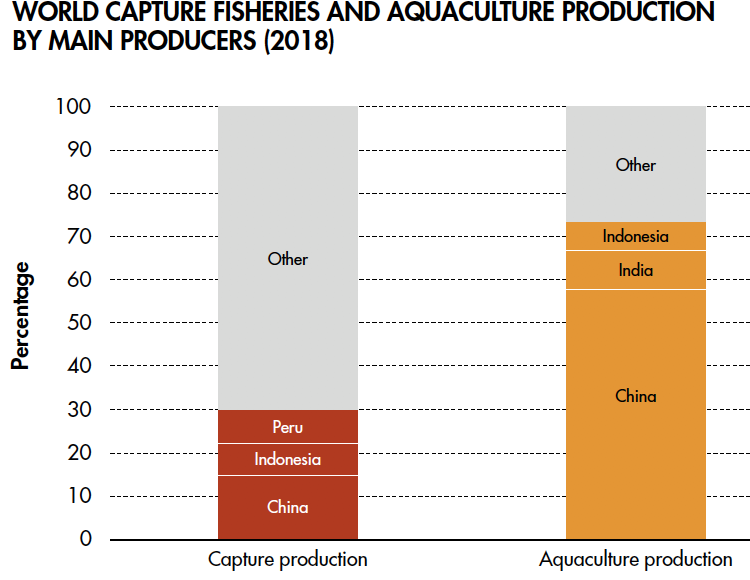 Some $1.4 trillion worth of farm goods were traded over national borders in 2018, over 40 percent of the total value of farm production and up sharply from $380 billion in 2000. Fruits and vegetables represented 23 percent of trade in farm commodities, followed by cereals, 14 percent, and fish and meat, each 11 percent. 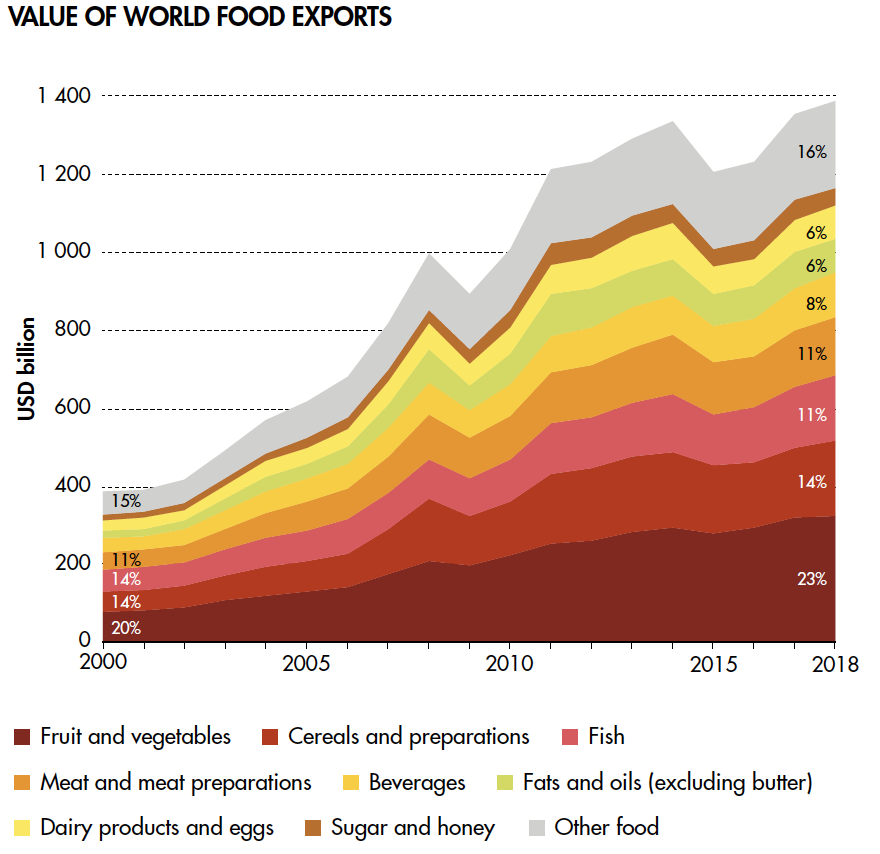 The Americas, Oceania, and Europe are net food exporters, while Africa and Asia are net food importers. The US accounted for nine percent of the world’s farm exports, followed by the Netherlands and China, six percent each.

The Americas are net exporters of fruits and vegetables, while Asia and Europe are net importers

Some 690 million people were undernourished in 2019, including almost 20% of Africans 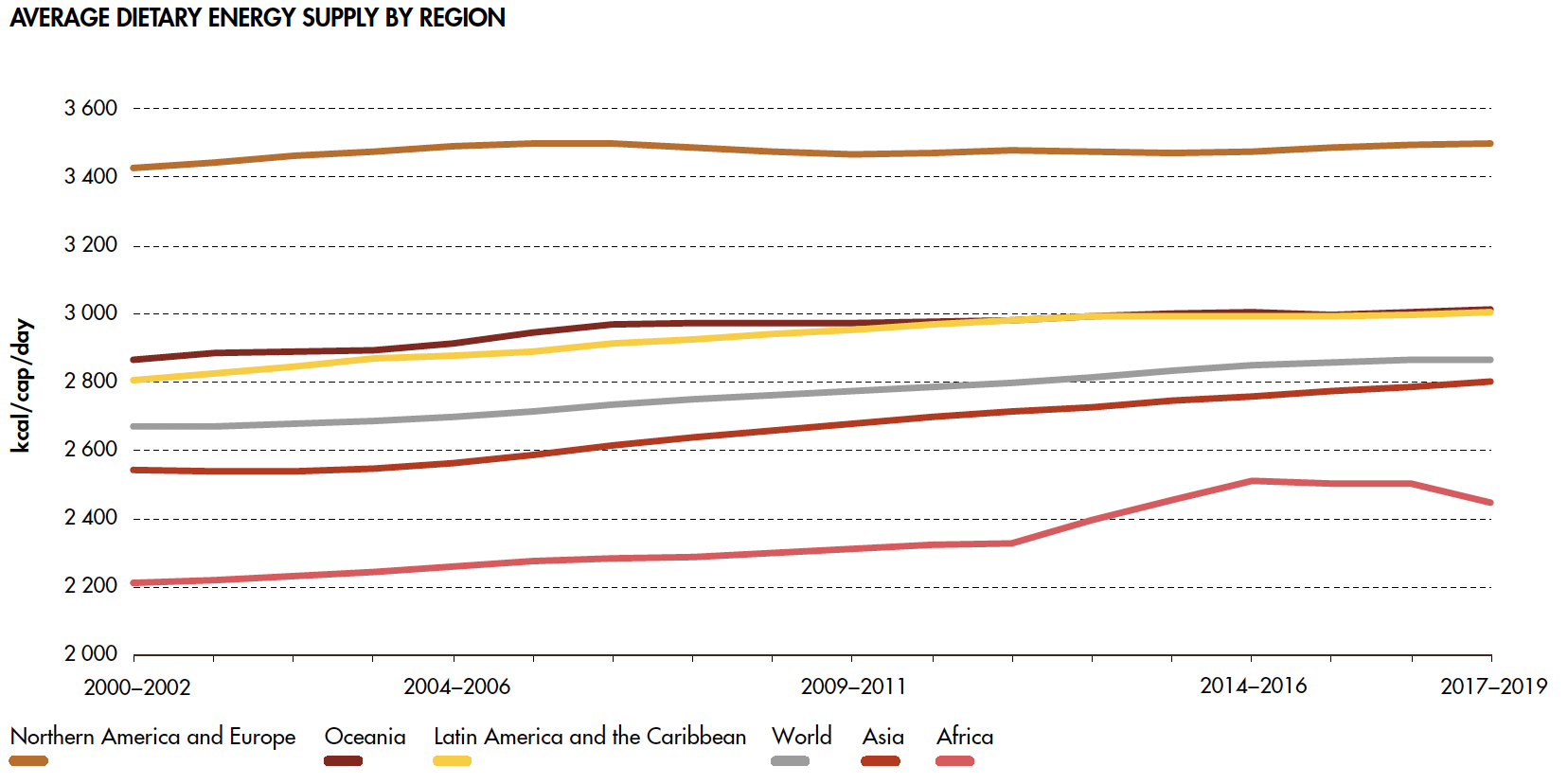 Some 13 percent of the world’s adults (18 and older) were obese in 2016, including over a quarter of adults in Europe and North America. Rates of obesity are rising everywhere. 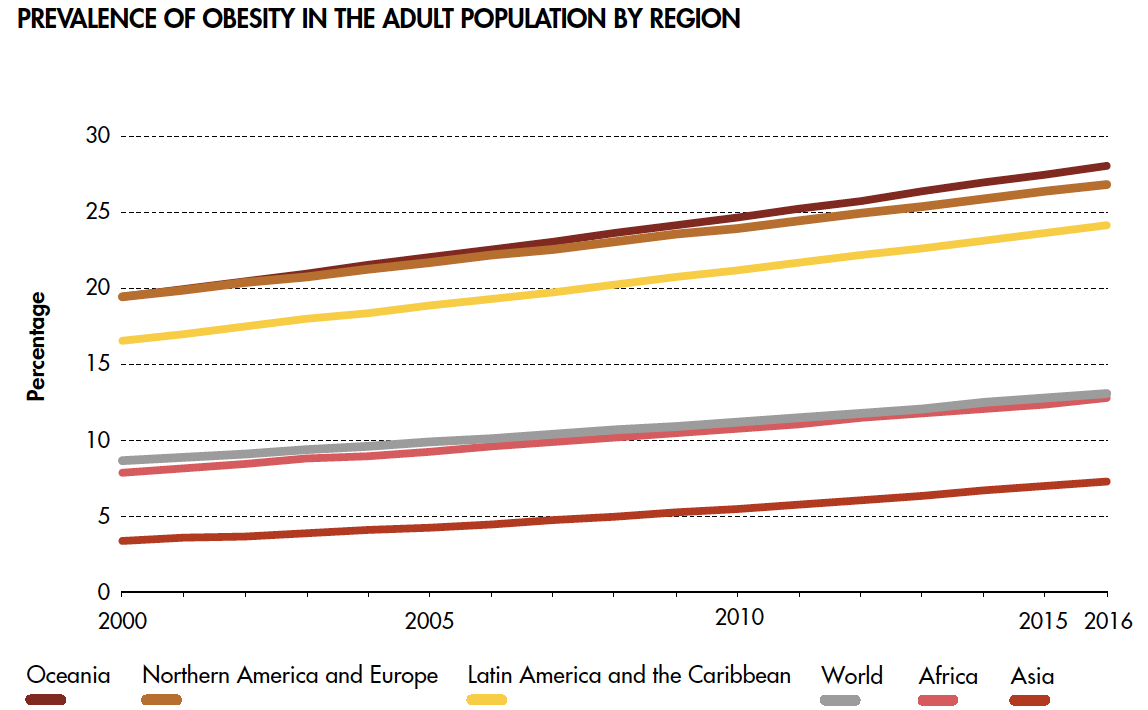 The share of adults who are obese is highest in Pacific Islands and the Middle East. In some of 20 most obese countries, there is both child undernourishment and adult obesity. In Egypt, for example, a quarter of children are undernourished and a third of adults are obese.

Half or more of adults are obese in some Pacific Islands 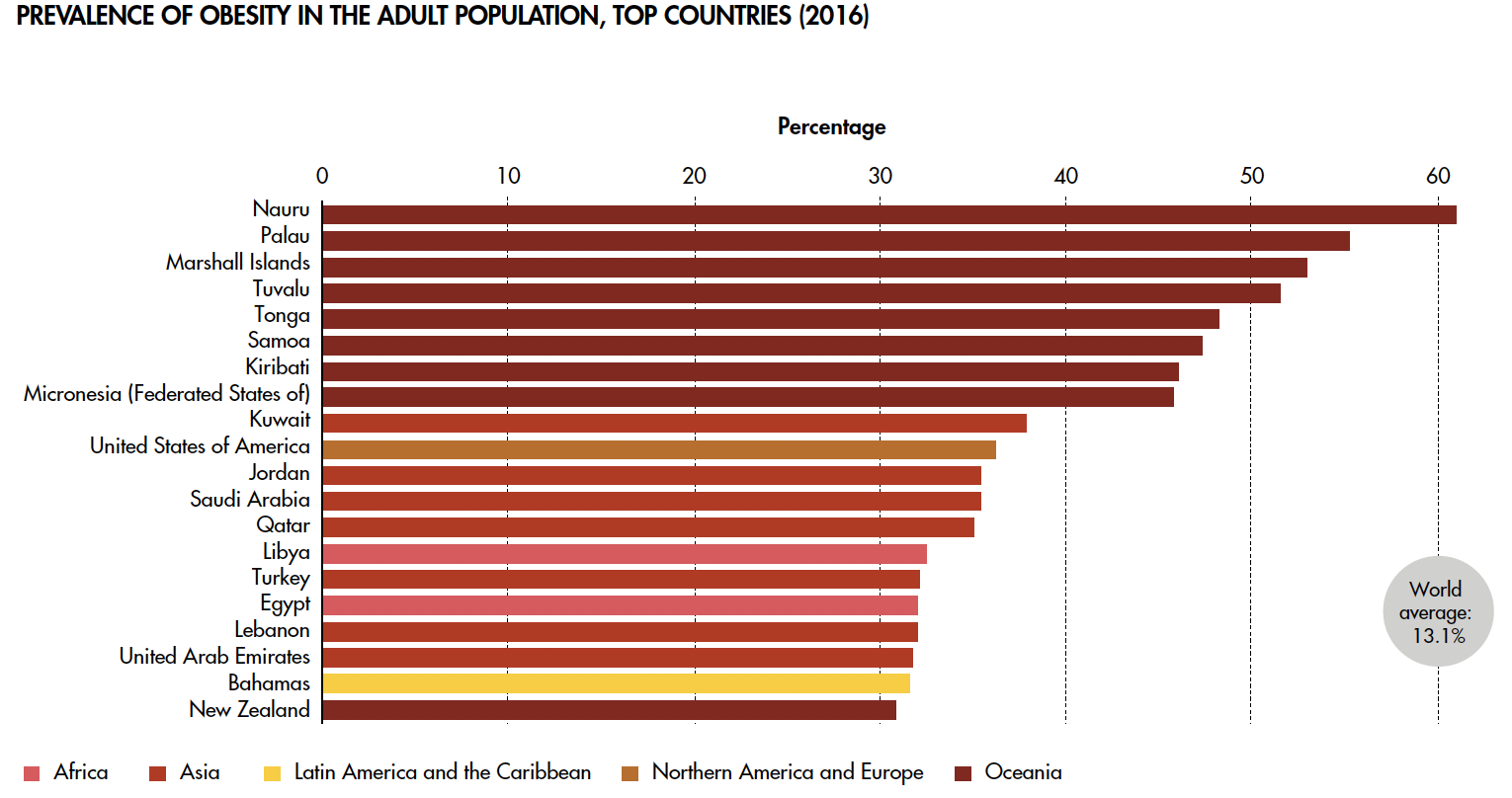 SDG target 12.3 aims to reduce food losses between farms and consumers. The FAO estimated that 14 percent of the food produced in 2016 was lost, including a quarter of the root and tuber crops such as cassava and potatoes and over 20 percent of the fruits and vegetables that were harvested. 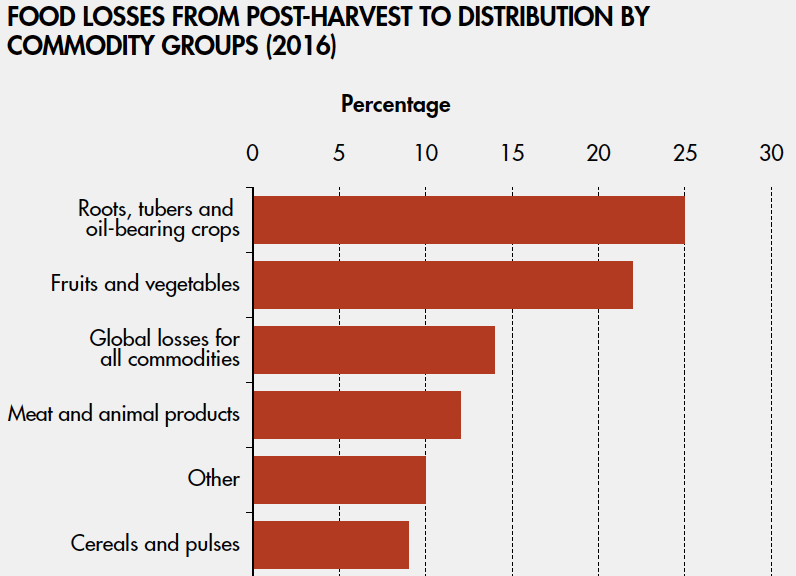 The FAO was created in 1945. Its statistical yearbook includes sections on economics, production, food security, and the environment. Annex Table 8 includes employment in agriculture by continent and country.