The H-2A program is in the spotlight for several reasons. First, the number of jobs certified and H-2A visas issued reached record highs in FY20 despite high US unemployment rates. DOL certified over 275,400 jobs to be filled with H-2A workers in FY20, and DOS issued over 213,300 H-2A visas. Between 75 and 80 percent of DOL certifications result in H-2A visas.

The top five H-2A states, Florida, Georgia, Washington, California, and North Carolina, accounted for over half of all H-2A job certifications. Employers specify the occupation or title of the job they want to fill with H-2A workers. In FY20, over 88 percent of the jobs certified were for crop farm workers, six percent were for equipment operators, and four percent were for animal farm workers.

The H-2A program allows US farmers who anticipate too few seasonal US workers to apply to DOL for certification to recruit and employ guest workers. In order to receive certification, farm employers must satisfy three major criteria, they must try and fail to recruit US workers, offer free and approved housing to guest workers and out-of-area US workers, and pay the state’s Adverse Effect Wage Rate of $12 to $16 an hour in the US in 2020, higher than federal, state, or local minimum wages.

DOL in a February 2, 2010 rule explained that the purpose of the AEWR is “to approximate the equilibrium wage that would result absent an influx of temporary foreign workers [so that] incumbent farm workers [are] in the position they would have been in but for the H-2A program.” The AEWR aims to prevent “wages from stagnating at the local prevailing wage rate when they would have otherwise risen to a higher equilibrium level over time.”

USDA’s Farm Labor Survey (FLS) collects employment and earnings data from farm employers for the week that includes the 12th of the months in January, April, July, and October. USDA cancelled the FLS in September 2020, but a federal judge ordered it reinstated, and USDA announced that average hourly earnings data for 2020 would be published February 11, 2021. 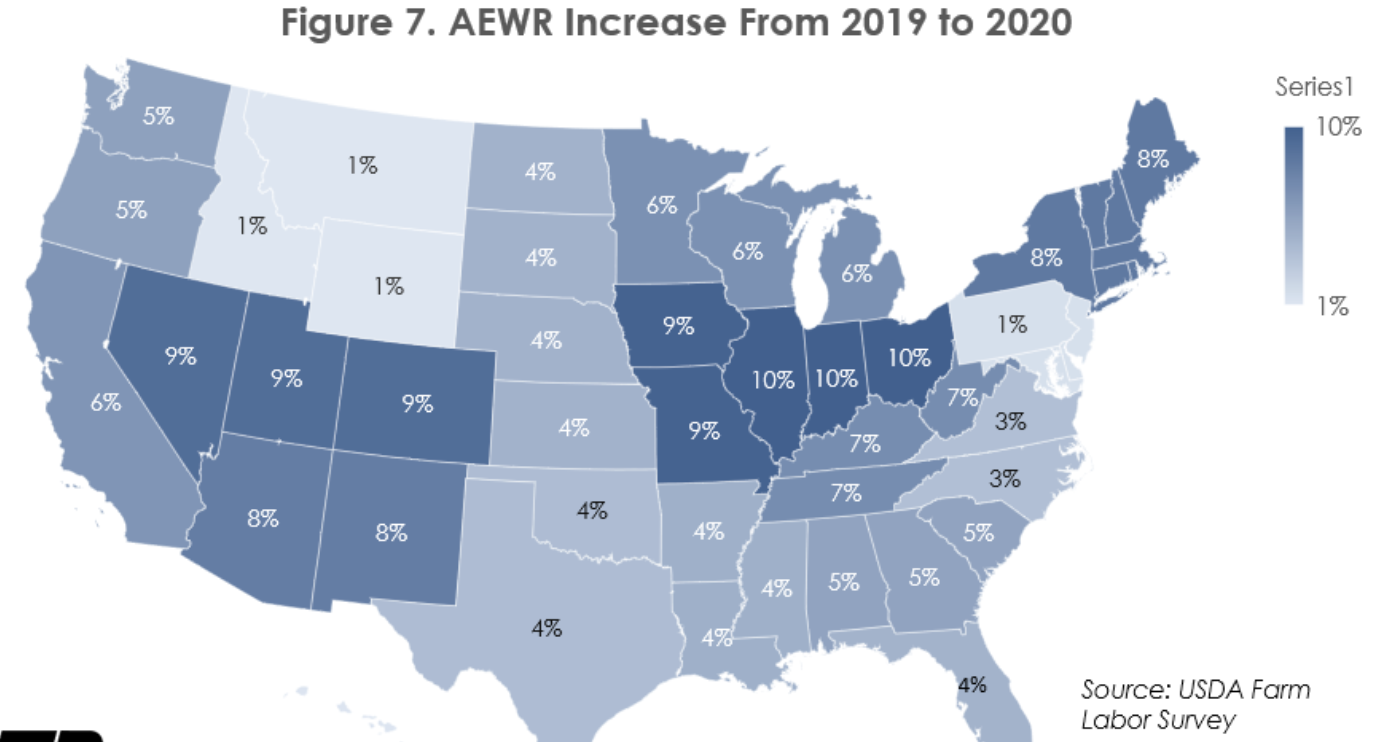 DOL on November 5, 2020 issued a final rule that ends reliance on the FLS to set AEWRs. DOL froze 2020 AEWRs for two years and will adjust them beginning in 2023 with the change in the Employment Cost Index, which surveys nonfarm employers to obtain wage data. Employers welcomed the AEWR wage freeze and the prospect of slower rising AEWRs based on the ECI rather than the FLS.

Worker advocates sued, and a federal judge on December 23, 2020 blocked the DOL AEWR freeze from going into effect. The judge noted that DOL must satisfy competing goals, viz, “providing an adequate labor supply and protecting the jobs of domestic workers,” but found that DOL did not provide adequate reasoning for freezing AEWRs for lower-skilled workers and raising AEWRs for a handful of highly skilled workers.

The judge found that DOL explained its rationale for the switch to the ECI to adjust AEWRs, but did not estimate the effects of the wage freeze and the switch to ECI adjustment on the wages of US farm workers, and did not provide adequate notice of its decision to change the AEWR methodology.

Perspective. Instead of saving employers money and giving them more certainty about AEWR increases, DOL’s November 2020 rulemaking increased uncertainty for H-2A employers and workers after the judge’s ruling. DOL retained 2020 AEWRs for H-2A applications filed in 2021 (https://flag.dol.gov/programs/h-2a), but employers who are certified will have to pay back wages if the AEWR for 2021 is raised.

The ostensible purposes of DOL’s July 26, 2019 rulemaking were to ensure that AEWRs for supervisors, construction, and driver job titles rose, and to reduce the year-to-year fluctuations in the AEWRs covering the other 98 percent of H-2A jobs. These goals could have been accomplished by continuing to set AEWRs for 98 percent of H-2A jobs with the FLS and selecting a different wage series to set and adjust AEWRs for the job titles not covered by the FLS. Instead, DOL elected to use the FLS to set AEWRs for 98 percent of jobs but freeze AEWRs for two years and then adjust them with a wage index that excludes farm workers.

DOL’s November 6, 2020 regulation may repeat an earlier short-lived DOL effort to change the basis of AEWRs. The outgoing George W Bush Administration issued a December 12, 2008 rule to modernize the H-2A program by basing AEWRs on Occupational Employment Statistics rather than FLS earnings data, reducing AEWRs by seven percent. The OES generates wage data for 800 occupations, but does not collect data from farm employers, only from nonfarm employers who bring workers to farms.

The OES publishes several measures of wages for four levels of worker proficiency, from Level 1 entry to Level 4 master. Level I wages are the average for the bottom third of workers when wages are ranked from low to high, and the Level IV wage is the average wage of the top two-thirds of the wage distribution. Level II and III wages are calculated by dividing the difference between Levels I and IV by three, and adding the difference to Level I and subtracting it from Level IV. For example, if the Level I wage is $6 an hour and Level IV $9 an hour, Level II would be $7 and Level III would be $8.

DOL in 2008 justified the switch to the OES because it “strongly values the geographic and occupational precision of the OES estimates as well as the ability to establish four wage-level benchmarks commonly associated with the concepts of experience, skill, responsibility, and difficulty within a given occupation.”

History may repeat itself if the Biden Administration reverses DOL’s November 5, 2020 regulation that froze AEWRs for most H-2A jobs and then adjusted them with the ECI.