The H-2A Program and AEWRs

US farm employers may be certified by the US Department of Labor (DOL) to recruit and employ foreign workers to fill seasonal US jobs if they satisfy two conditions. First, they must try and fail to find local workers, and second, they must ensure that the presence of the migrant guest workers will not adversely affect similar local workers.

DOL is charged with implementing these conditions. Farm employers must advertise their jobs so that US workers know about them, and report to DOL whether US workers who apply are hired or rejected for valid reasons. DOL tries to prevent adverse effects by setting an Adverse Effect Wage Rate (AEWR), a minimum hourly wage that is higher than the federal or state minimum wage and aims to approximate the wage that would prevail if there were no guest workers.

Employers must offer and pay at least the AEWR to H-2A workers and any US workers who are employed alongside them. Farm employers complain that the AEWR is too high and is increasing too fast, while worker advocates argue that the AEWR sets a ceiling on farm wages, since US workers who want more than the AEWR to accept an advertised job do not need to be hired.

DOL relies on wage or earnings data from USDA’s Farm Labor Survey (FLS) to set AEWRs by state or region. FLS wage data are from a questionnaire sent to about 35,000 US farm employers in April and October that obtains information on the average hourly earnings of the workers farmers hire directly. The FLS does not collect data on workers who are brought to farms by labor contractors and other nonfarm employers. The average gross hourly earnings of field and livestock workers from the FLS for one year become the AEWR for the next year.

USDA cancelled the FLS in September 2020, and DOL responded with a proposal to freeze AEWRs at current levels in 2021 and 2022 and then adjust them each year based on changes in DOL’s Employment Cost Index, a survey of nonfarm employers. Worker advocates sued, and a federal judge ordered USDA to continue the FLS. USDA released 2020 FLS data in February 2021 and DOL used these hourly earnings data to set AEWRs for 2021. 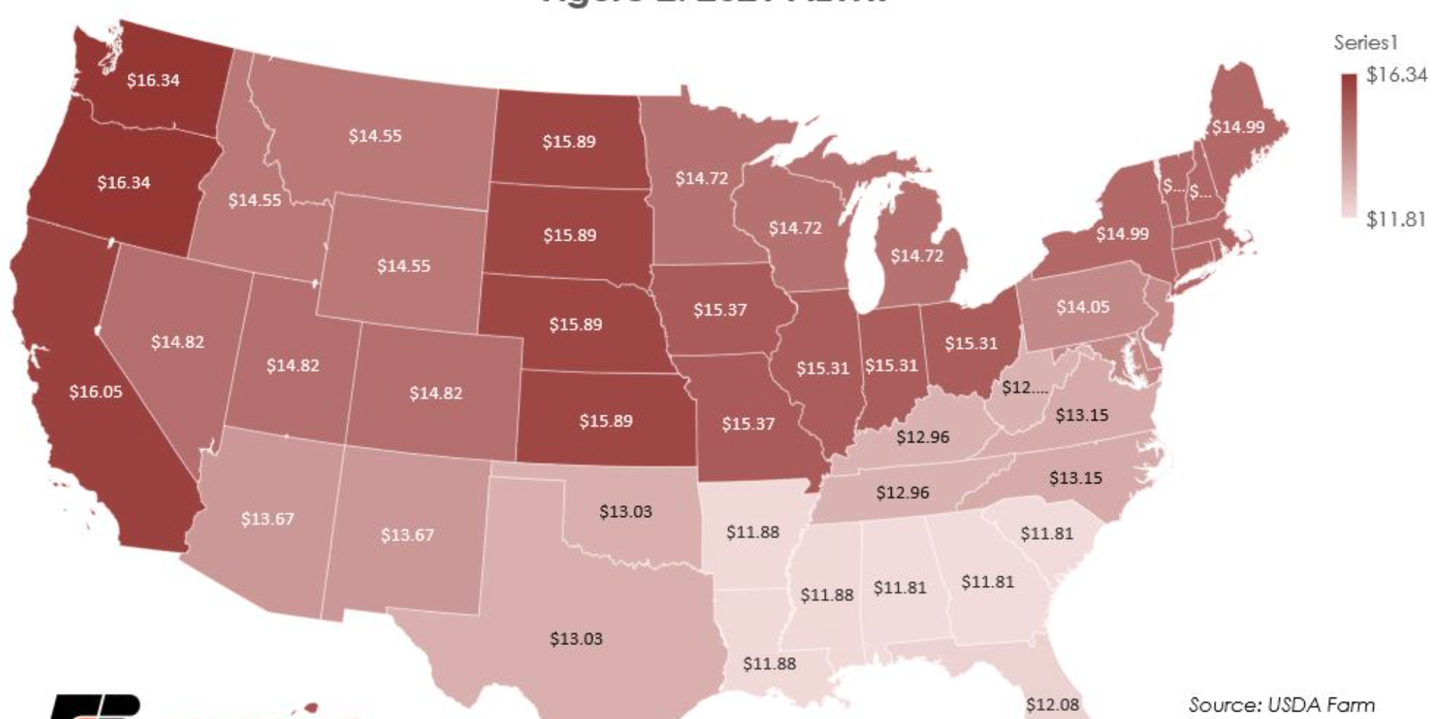 Between 2016 and 2021, the US AEWR rose by 20 percent, but there were significant differences by region and state. The fastest wage growth, up 35 percent over the five years between 2016 and 2021, was in CO, NV, and UT. The slowest five-year wage growth was in Florida, where AEWRs rose nine percent. Florida is the state with the most H-2A jobs certified. 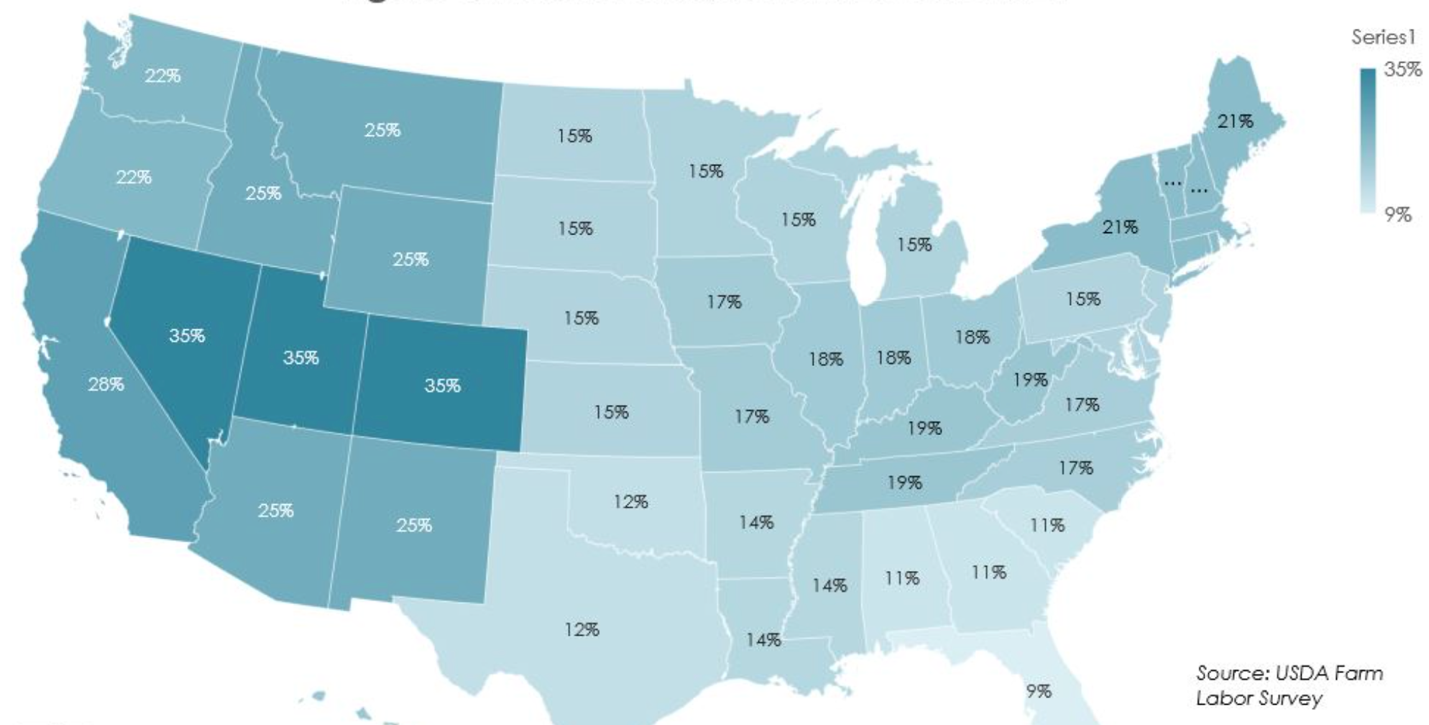 H-2A workers are in the US for an average of six months, so the 275,000 H-2A jobs certified were equivalent to 137,700 full-time jobs in 2020. Average employment on crop farms in 2020, including workers hired directly and those brought to farms by nonfarm employers such as labor contractors, was 888,300 in 2019. This means that H-2A workers filled 16 percent of average employment in US crop agriculture in 2020.

In California and Washington, H-2A workers filled a smaller share of average employment in crop agriculture, and AEWR increases between 2016 and 2021 were larger than the 20 percent increase for the entire US. By contrast, in Florida, Georgia, Louisiana, and North Carolina, where H-2A workers fill a high share of jobs in crop agriculture, AEWRs rose slower between 2016 and 2021. 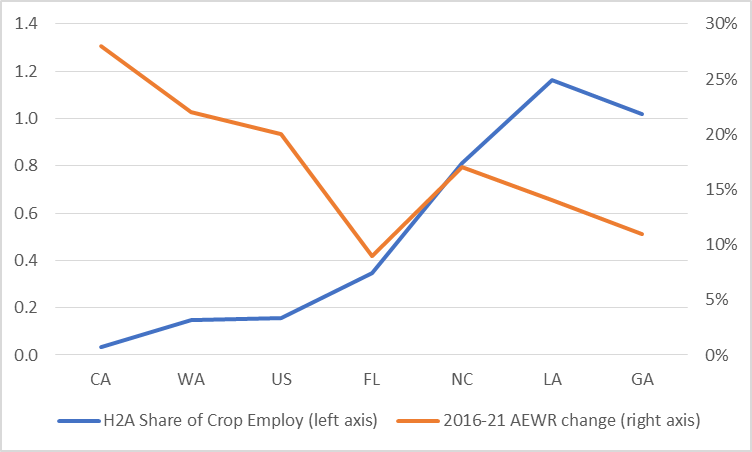 The chart showing the H-2A share of crop employment on the left Y-axis, and the change in the AEWR between 2015 and 2021 on the right Y-axis, must be interpreted with caution. Average crop employment data are from the Quarterly Census of Employment and Wages, which includes H-2A workers in CA and WA, but not in the southeastern states. The relatively large number of H-2A workers in southeastern states, and their exclusion from unemployment insurance and thus QCEW data in these states, mean that there are more full-time equivalent H-2A workers in LA and GA crop agriculture than the average employment of UI-covered US workers on these states’ crop farms.

The COA and QCEW data are not directly comparable. Both count jobs rather than unique workers, but COA jobs can be a few days or weeks, while QCEW average employment approximates full-time equivalent or year-round jobs.

In CA and WA, by contrast, H-2A workers must be included in unemployment insurance, so their employment and earnings are in the QCEW data along with data on US workers. In these states, H-2A employment is a smaller share of average crop employment.