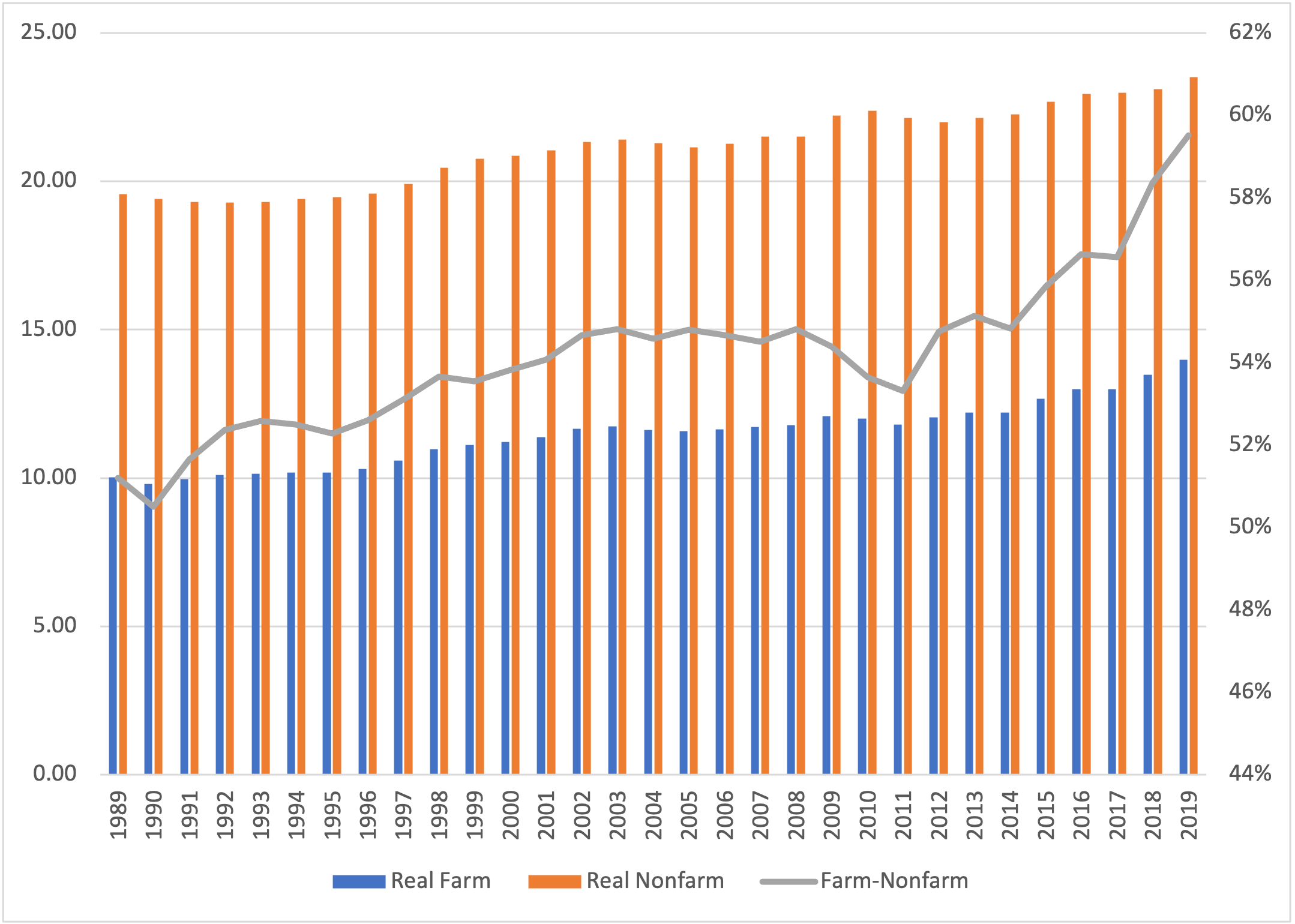 USDA collects data from farm operators by asking them to report the total earnings of different types of employees, such as workers employed in crops, those involved with animals, and equipment operators, for the week that includes the 12th of the month of January, April, July, and October. Employers also report the total hours worked by each type of employee during the survey week. The FLS divides earnings by hours to calculate the average hourly earnings of all hired farm workers, non-supervisory workers, crop workers, livestock workers, equipment operators and earnings in other occupations.

Farmers report data to USDA only for workers they hire directly, that is, they do not report the employment and earnings of workers who are brought to their farms by labor contractors and other nonfarm employers.

The very small gaps between gross and base wages in the FLS suggest that the 7.65 percent employee-paid Social Security and Medicare taxes are offset by the low guaranteed wages of piece rate workers. Piece rate earnings are included in FLS gross wages. The FLS began to distinguish gross and base hours worked in 2020. Gross hours are all hours worked, and base hours exclude overtime hours.

Farm employers report hired workers by occupation, and distinguish gross from base hours and earnings

States and Regions. In most regions, QCEW weekly wages rose faster than FLS hourly earnings over the past decade, especially for directly hired crop workers. Since QCEW wage data are available by state, they could provide a substitute to adjust AEWRs. 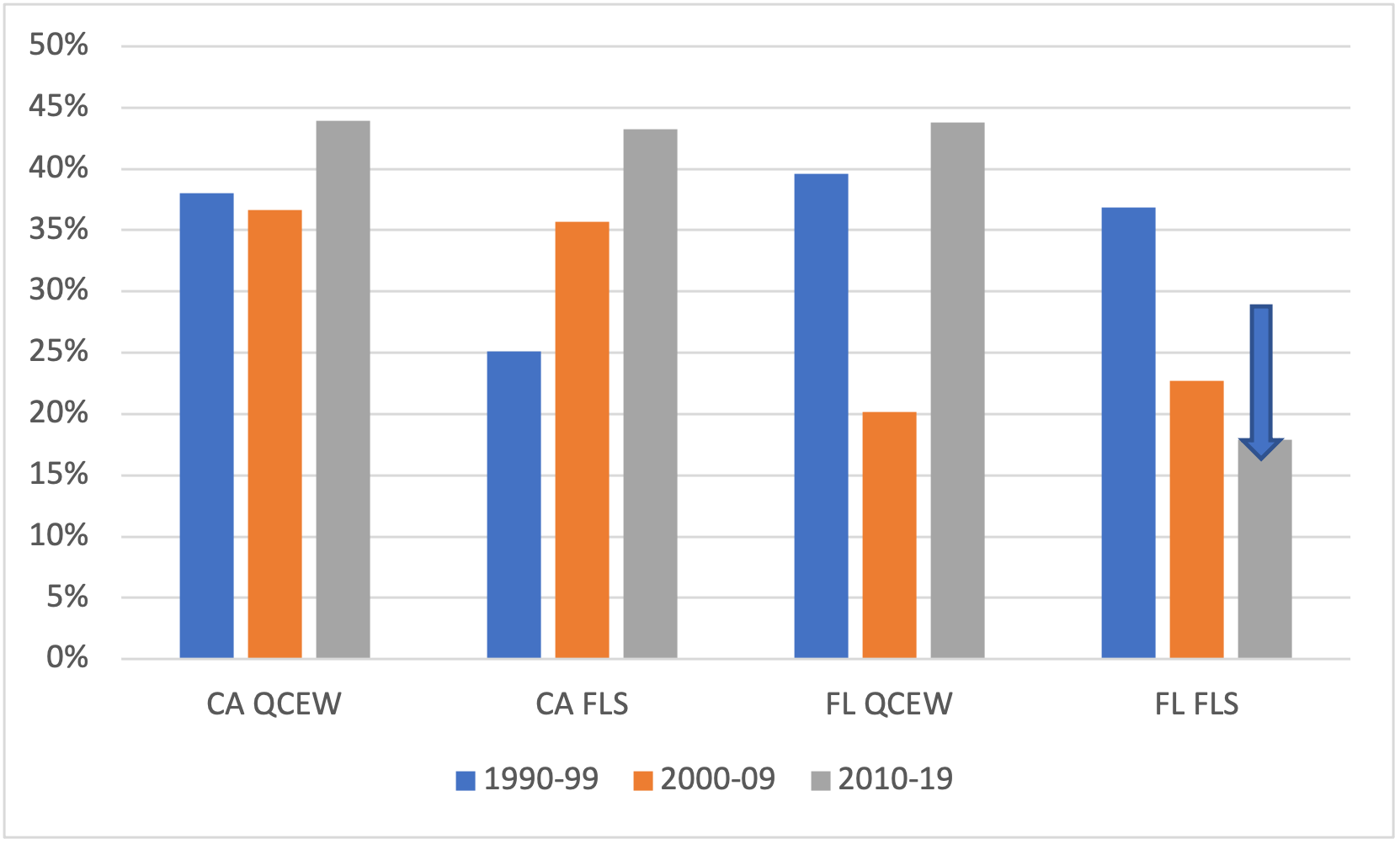 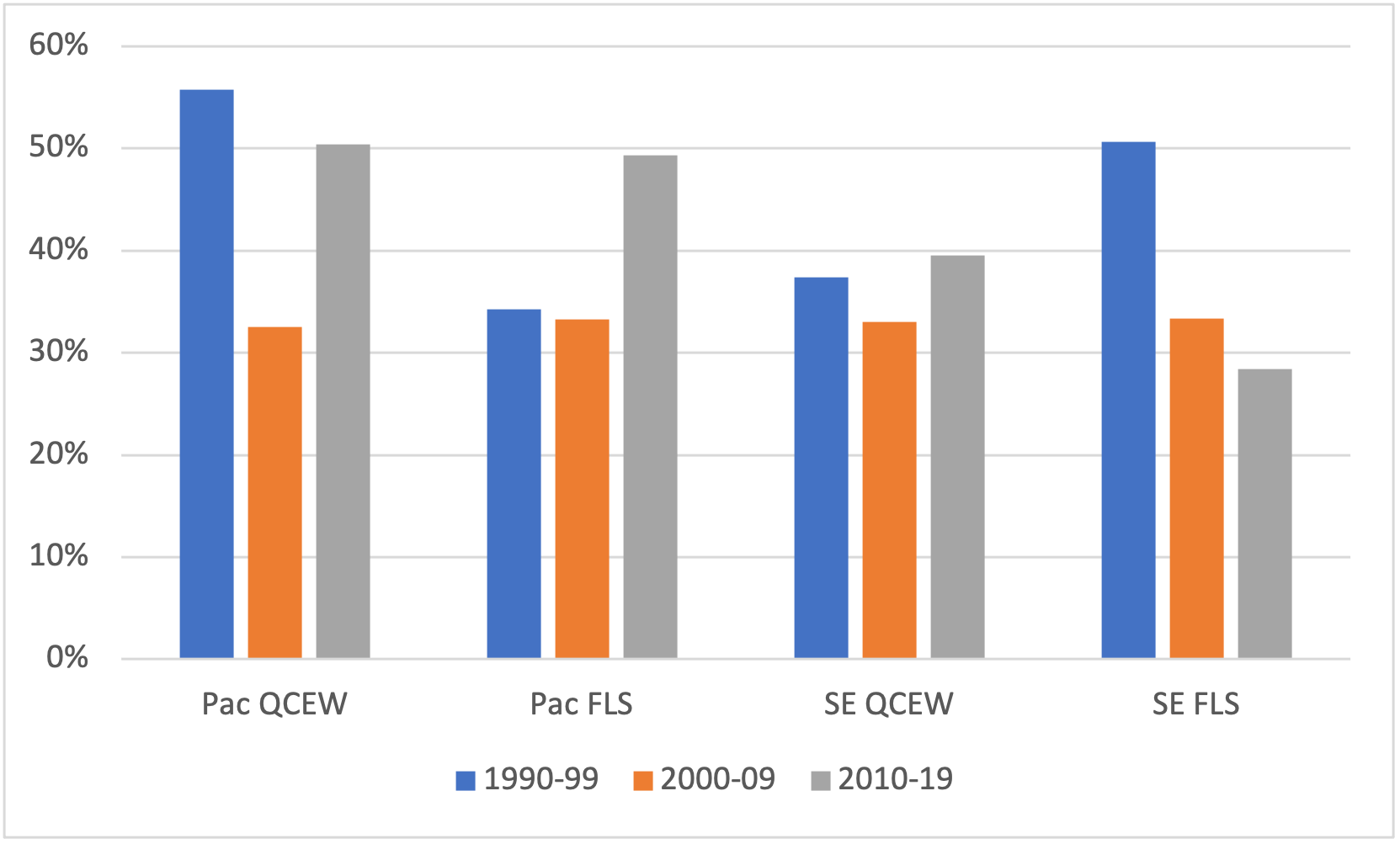 The growth of average weekly wages in the QCEW in the southeast was slower than the growth in FLS farm worker earnings in the 1990s, similar in the first decade of the 2000s, and slower since 2010. One reason may be that southeastern states have high shares of H-2A guest workers whose employment and wages are included in the FLS but not in QCEW data.

CA and WA require employers of H-2A workers to report their employment and earnings to the QCEW, while Florida and southeastern states do not. As the H-2A program expanded between 2010 and 2019, there was little difference in QCEW and FLS wage growth in California and the Pacific states, but QCEW wages rose faster than FLS earnings in the QCEW in Florida and the southeastern states.

This is one why some employers want to set AEWRs by occupation for each state and region, which is what DOL proposed July 26, 2019. However, DOL’s AEWRs-by-occupation proposal was withdrawn by the Biden Administration in January 2021, so there is one AEWR per state or region based on the FLS in 2021.

FLCs. Farm labor contractors are not included in the FLS survey, but are included in the QCEW if they satisfy federal and state criteria. The QCEW reported 2,800 US FLC establishments in 2019 and average FLC employment of 181,300 (monthly employment ranged from a low of 141,600 in March to 216,700 in June) and average weekly wages of $530. US FLC establishments and average employment have been rising, up from 2,200 and 154,500 in 2009, with most of the increase in California.

What could explain the shrinking employment and slower growth of FLC weekly wages in Florida after 2005? One reason may be that Florida FLCs employ mostly H-2A workers whose employment and wages are not reported to the unemployment insurance system and are excluded from QCEW data. Over 39,000 farm jobs were certified to be filled by H-2A workers in Florida in FY20, versus 25,500 in California.

The average weekly wages of FLC employees in CA and the US were lower than in Florida until 2005, when FL FLC weekly earnings fell behind 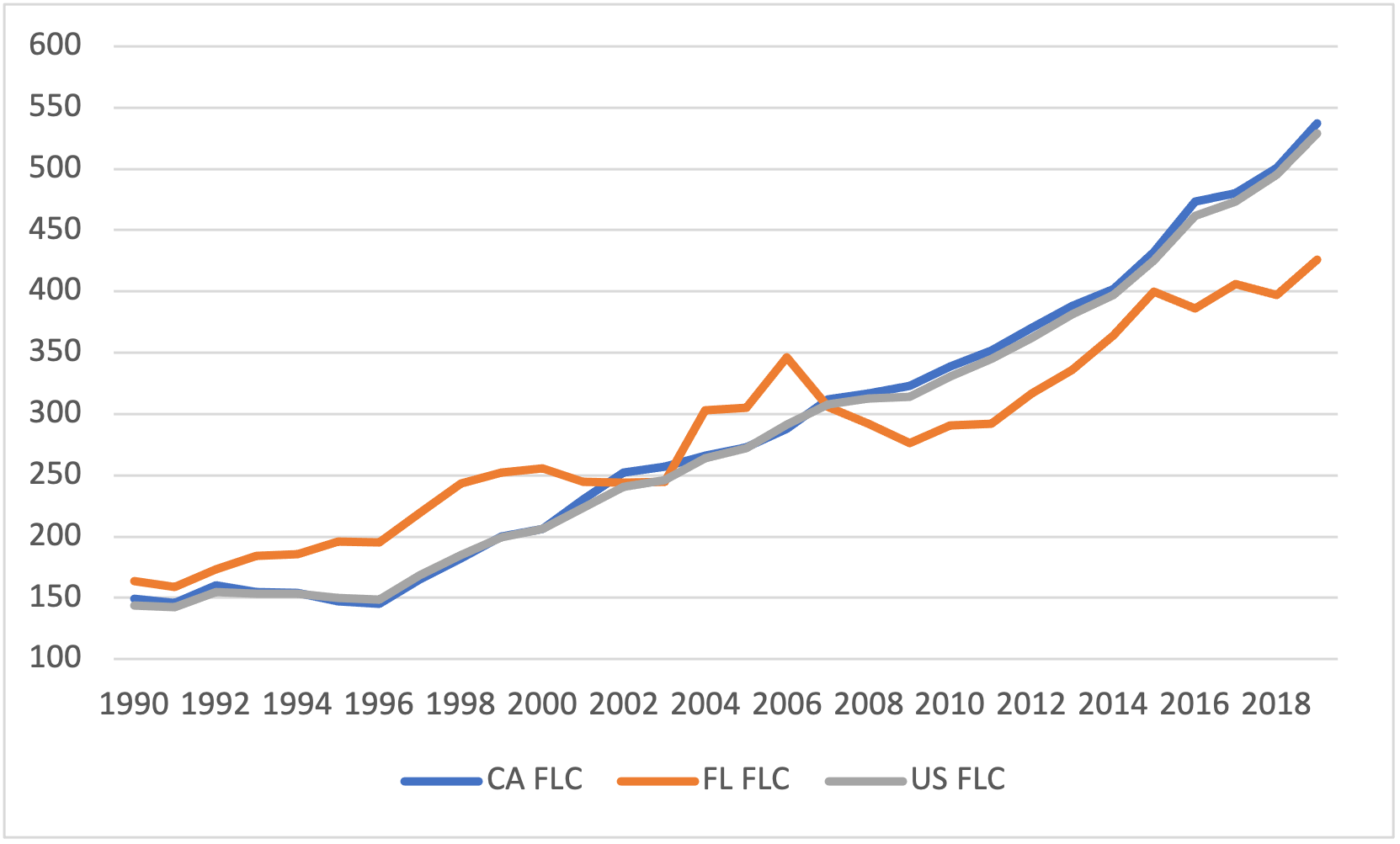