The Farm Workforce Modernization Act (HR 1603) was re-introduced in March 2021 by Representatives Zoe Lofgren (D-CA) and Dan Newhouse (R-WA). The previous version of the FWMA, HR 5038, was introduced in October 2019 and approved by the House on a 260-165 vote in December 2019. Most farm organizations and worker advocates endorse the FWMA.

The FWMA was reintroduced in the House March 2021

Legalization. Title 1 allows unauthorized farm workers who did at least 180 days of farm work over the two years before March 2021 to become Certified Agricultural Workers during an 18 month application period. CAWs would receive renewable 5.5 year work permits that allow employment in any industry, but CAWS could lose their status if they failed to complete at least 100 days of farm work a year. CAWs could travel in and out of the US.

The spouses and minor children of CAWs could receive work and residence visas, and they would not have to do farm work to maintain their status.

Currently, employers may sponsor 5,000 foreigners without college degrees a year for immigrant visas. The FWMA would create 40,000 additional immigrant visas for farm workers. These immigrant visas could go to workers who are sponsored by US employers or be given to H-2A workers who apply on their own initiative after working at least 10 years in the US. If there is a backlog of applicants, farm workers with pending immigration visa applications would be allowed to stay in the US indefinitely until their applications are adjudicated.

H-2A. Title 2 streamlines the H-2A program by making the employer application process and job ads electronic, introduces three-year H-2A visas, and allows H-2A workers to fill year-round jobs. Many of the changes that the FWMA makes to the H-2A program were included in proposed regulations issued by DOL July 26, 2019.

Many current H-2A regulations are maintained in the FWMA, including requirements that farm employers (1) try to recruit available, willing, and qualified US workers before being certified to employ H-2A workers, and (2) employers must offer and pay the highest of several wages, including the prevailing wage or the Adverse Effect Wage Rate (AEWR), to avoid adversely affecting the wages and working conditions of US workers.

AEWRs vary across states, and the FWMA would freeze them at 2021 levels of $11.81 to $16.34 an hour for 2022. Beginning in 2023, AEWRs would change from one per state to up to 10 AEWRs per state because they would be set by job title, so that the AEWR for equipment operators would be different from the AEWR for crop workers. The FWMA would limit AEWR increases and decreases from year to year for a decade as DOL and USDA study the need for and effects of AEWRs. 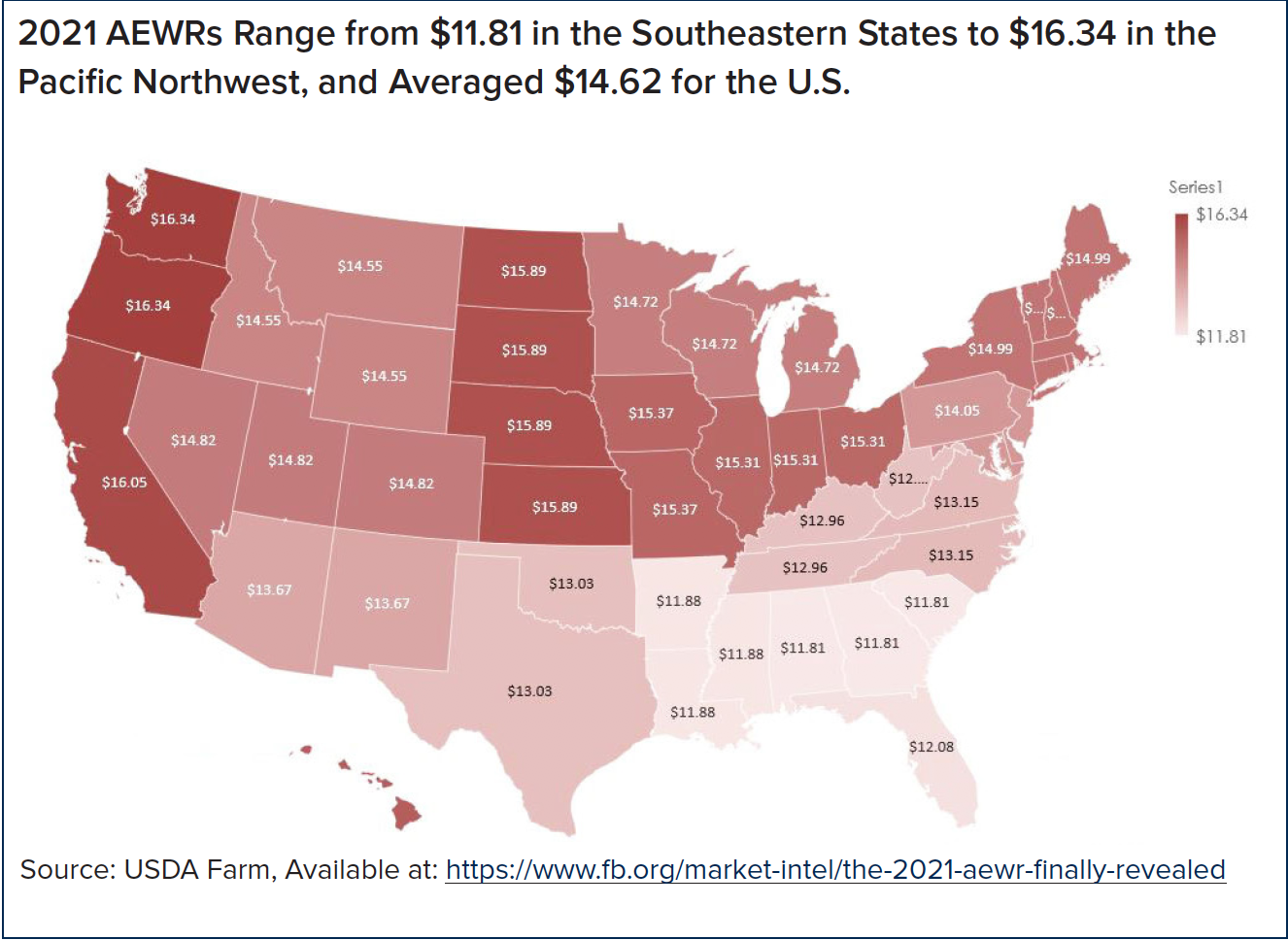 H-2A workers could elect to stay longer than the current usual 10 months. H-2A visas would be valid for three years. After completing one contract, an H-2A visa holder could remain in the US up to 45 days to find another job with an employer who is certified to hire H-2A workers, saving the second employer recruitment and transportation costs. The Migrant and Seasonal Agricultural Worker Protection Act would cover H-2A workers.

A Portable Agricultural Worker (PAW) pilot program would allow up to 10,000 foreigners a year to enter the US and work for a variety of farm employers for six years, after which DHS, DOL, and USDA would study the PAW program and make recommendations on its fate.

E-Verify. Title 3 requires all farm employers to participate in E-Verify after the CAW legalization program ends and the H-2A changes are implemented. 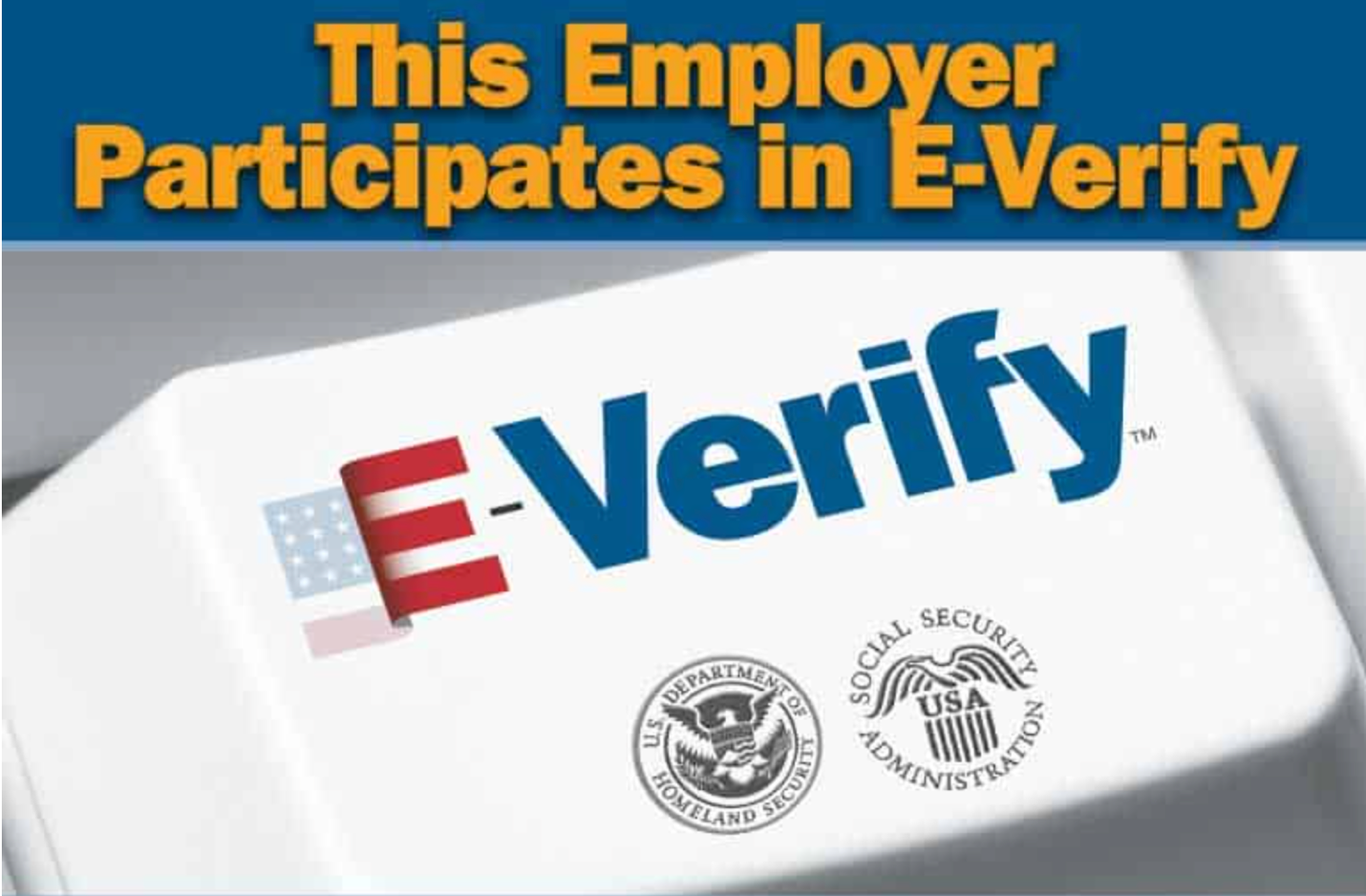 Perspective. Most industry and worker advocate organizations supported the FWMA in 2019, and most expressed support for the FWMA in 2021. The FWMA embodies trade offs, such as legalization for unauthorized farm workers in exchange for making it easier for more farm employers to hire H-2A workers.

Most farm groups and the UFW support the FWMA

Some worker advocates opposed the FWMA in 2019, including the Food Chain Workers Alliance, which includes the Familias Unidas por la Justicia, CATA, and the Farmworker Association of Florida, because the FWMA does not provide an easy path to US citizenship for currently unauthorized farm workers. CATA cited the continued dependence of most H-2A workers on their employers to oppose the FWMA.

Farm organizations worry that the 20,000 cap on H-2A visas for year-round jobs is too low, and the requirement that employers offer family housing to year-round workers could be burdensome. Some employers expressed concern about the requirement to use E-Verify to check the status of new hires.-H-2

Researchers noted that there were no hearings on the FWMA in 2019, making it hard to evaluate the effects of various provisions and how they may interact. The requirement that CAWS continue to do at least 100 days of farm work a year for four to eight years should stabilize and perhaps increase the supply of US farm labor as CAW workers earn eligibility for immigrant visas. On the other hand, the AEWR freeze and the opening of year-round jobs to H-2A workers could increase employer demand for H-2A workers.