Migration and Development: The 3 R’s

Over the past three decades, the concept of development has broadened to include noneconomic factors, such as empowering people so that they have the education, health, and voice to participate in and enjoy life in their communities. The UNDP publishes an annual Human Development Index that ranks countries by their level of human development using more than per capita GDP, including life expectancy and years of schooling.

Migration and Development. Studying migration and development means examining how sending people from poorer to richer countries affects economic and human development in migrant-sending communities. There was optimism in the 1970s that counties sending workers abroad would enjoy faster development because unemployed workers would go abroad, send home remittances, and return with new skills.

In fact, it was often employed workers who went abroad and settled, and many reduced or ended ties to their areas of origin. The result was a wave of pessimism in the 1990s about the ability of migration to spur development, as some migrant-sending countries demanded compensation from migrant-receiving countries for the brains and brawn they acquired via migration.

The migration and development pendulum swung back toward optimism in the 21st century as remittances became the largest financial flow to many developing countries. Optimists emphasized that the opportunity to work abroad could encourage more residents in developing countries to get more education. Not all of the additional doctors and nurses would go abroad, so that what appears to be a brain drain could in fact become a brain gain.

Trade. Trade involves the production of a good in one country and its consumption in another, such as producing cars in China and selling them outside China. The value of world trade in goods was about $20 trillion or a fourth of the world’s $80 trillion GDP in 2019, and trade fell more than GDP in 2020 as Covid closed borders.

Countries have widely varying shares of trade relative to their GDPs. The share of imports and exports relative to GDP is largest for small economies such as Singapore, over 300 percent, and smallest for countries with large internal economies, including Japan at 31 percent and the US at 27 percent.

Trade means that goods rather than people cross national borders. Freer trade can attract investment that creates jobs in migrant-origin countries and reduce out-migration. Then-Mexican President Salinas in 1990 urged the US to approve NAFTA so that Mexican could send tomatoes rather than tomato pickers to the US.

Salinas proved prescient. Mexico has become the world’s largest exporter of fresh tomatoes, providing over half of the fresh tomatoes consumed in the US. A million workers are employed on farms in the six Mexican states that export fruits and vegetables to the US, and another two million are employed on US farms that mostly produce fruits and vegetables. With Mexico supplying half of US fresh fruit imports, and three-fourths of US fresh vegetable imports, trade is substituting for Mexico-US migration.

Mexico accounted for a quarter of tomato exports in 2019

The growth in world trade has been slowing, and may shrink if firms re-shore or bring jobs home to increase the resilience of their supply chains. Many Asian countries including China experienced an economic miracle when they attracted foreign investment that created jobs for millions of rural-urban migrants in factories that produced goods for export.

The growth of world trade has slowed 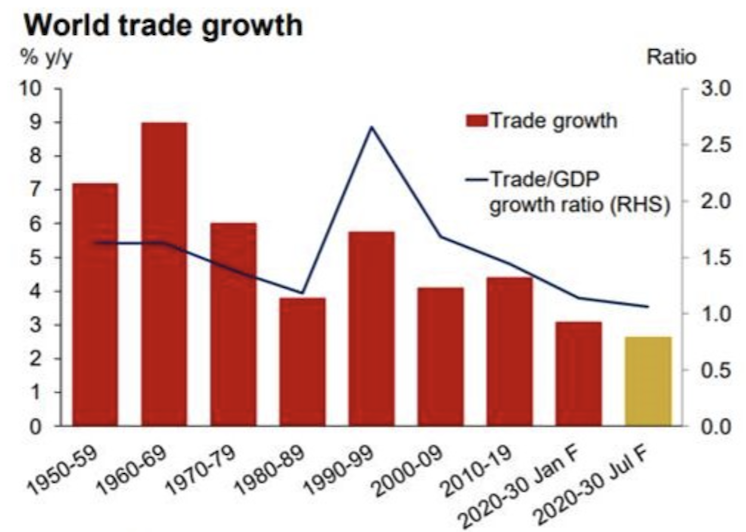 Aid. Aid or Official Development Assistance involves money flowing from richer to poorer countries to accelerate development. In the past, aid often flowed from richer to poorer governments to build infrastructure such as roads, dams and bridges, but today more aid flows to NGOs devoted to improving education and health care for poor people and strengthening democracy and governance structures by promoting citizen engagement and holding political leaders accountable. Rich countries are urged to donate 0.7 percent of their gross national income in aid, but few do. 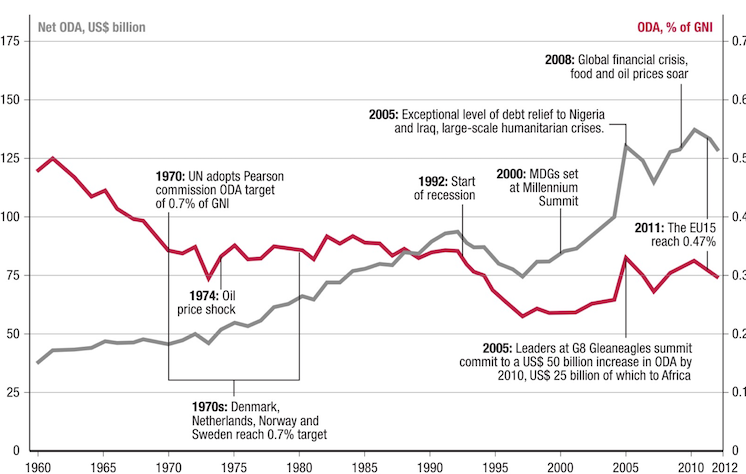 The evidence that trade speeds development is stronger than aid accelerating development. Many studies show that developing countries that are open to trade and investment grow faster than more closed economies. Foreign investors often import technology and components and employ local workers to produce goods for export, as with the assembly of electronics in China with internal migrants and in Malaysia with international migrants. In some cases, aid promotes development, while in other cases aid props up corrupt elites whose activities slow development.

Migration. Migrant-sending countries typically have more workers than jobs, so sending workers abroad should put upward pressure on the wages of remaining workers and narrow the wage gaps that encourage out-migration.

The effects of migration on development can be examined via the 3-R channels of recruitment, remittances and returns:

Most migrants are young people who have the least invested in jobs and careers at home and the longest period to recoup an investment in migration abroad. Even among young people, who migrates is heavily shaped by employers, recruiters and networks. Do employers recruit IT professionals and nurses, or domestic and farm workers? Do recruiters seek out workers in particular areas? Do migrants abroad recruit their friends and relatives, allowing social networks to determine who goes abroad?

A major recruitment issue is how much workers pay for jobs abroad. Employers pay most recruitment costs for highly skilled workers because there are fewer doctors, nurses and IT specialists relative to the demand for them. However, there are often more low-skilled workers than foreign jobs available, and private recruiters may charge workers the equivalent of several months of foreign earnings to link them with foreign employers, allocating scarce foreign jobs by worker willingness to pay. Reducing worker-paid recruitment costs could increase the benefits of migration to workers and speed development. 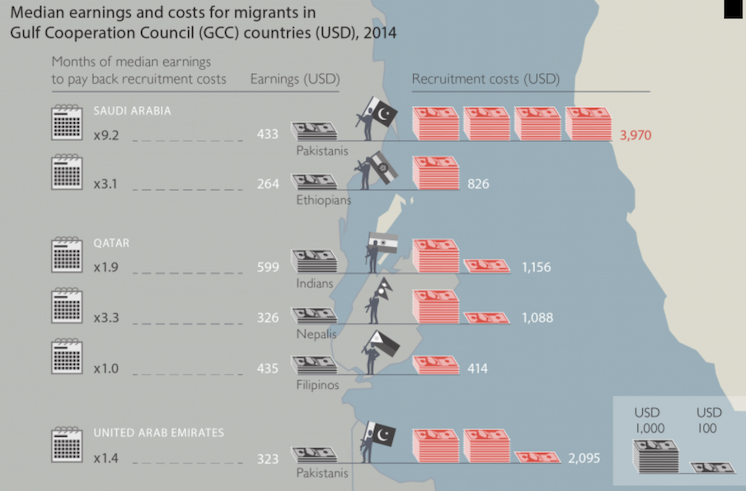 Remittances are the portion of migrant incomes earned abroad that are sent home, and are the largest financial flow to developing countries, over $500 billion a year. Remittances increase incomes and improve lives for the families that receive them, and can help non-migrants when they are spent on new or improved housing and other goods and services that create jobs. Remittances have more ambiguous macroeconomic effects, since they can raise the value of the sending-country currency and make export goods less competitive, as when remittances to Moldova raise the value of the leu and reduce wine exports.

Remittances exceeded ODA in the 1990s, and were the largest financial flow to developing countries in 2020 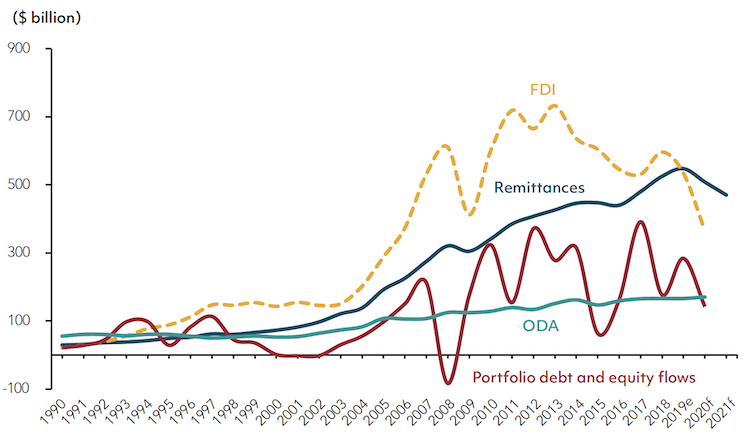 Many UN and other agencies aim to reduce the cost of transmitting small sums over borders. The average cost of sending $200 from one country to another is $15; the goal is to reduce the cost to less than $5. However, a combination of many workers not having bank accounts, and government regulation of money transfers to prevent the financing of terrorism, has limited reductions in remittance costs even as low-cost mobile banking using cell phones spreads.

Returns involve the activities of migrants after working abroad. Host governments often allow high skilled migrants to bring their families and settle, which may reduce ties to countries of origin over time. Low-skilled migrants usually go abroad without their families, and most are required to return when their contracts end. Some returned migrants use the skills and savings they acquired abroad to start new businesses, while others rest before going abroad again. In such cases, rural villages can become “nurseries and nursing homes” if most working-age residents are internal and international migrants.

Many migrants use remittance savings to build new houses at home 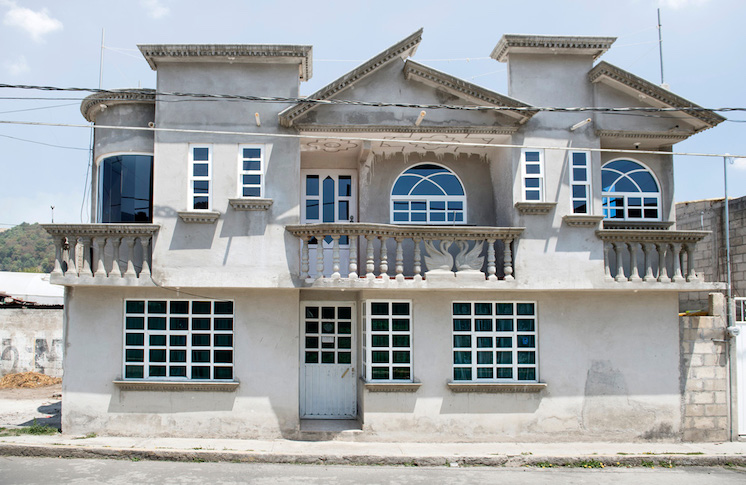 Development agencies recognize that staying abroad is a personal choice for highly skilled migrants, so they often downplay the brain drain by emphasizing that the opportunity to go abroad encourages more people to get more education, and that not all of these more educated people will emigrate. Most efforts to increase the economic payoff of returned migrants center on recognizing the skills that migrants acquired abroad to ensure that returned migrants can get jobs at home that use these skills.