Development and the Migration Hump

Development is a term applied to countries to assess their socio-economic well-being and to measure changes in well-being over time. The major indicator of development is the level and change in a country’s per capita income; other indicators include average life expectancy and average years of schooling.

Most of the world’s 281 million international migrants in 2020 moved from poorer to richer countries. Much of this migration was unwanted and irregular. This raises a question: could richer countries help to speed up development in poorer countries in ways that slow the out-migration of residents?

For example, the upsurge in Central Americans entering the US illegally and applying for asylum in 2021 prompted President Biden to propose $1 billion a year in aid to speed up development in El Salvador, Guatemala, and Honduras. Biden appointed Vice President Kamala Harris to lead the effort to address the root causes of emigration, including gang activities that generate some of the world’s highest homicide rates, corruption and impunity from prosecution, and natural disasters such as destructive hurricanes.

Development and Migration. There is little unwanted migration between countries at similar levels of development. However the development process, the period during which socio-economic conditions improve, can speed up outmigration. This means that faster development can generate a migration hump, such as the Mexico-US migration hump that occurred after Mexico joined NAFTA in 1994.

Migration humps occur when there is already migration underway, new or changed policies and events create disruptive change, and people’s aspirations rise faster than they can be fulfilled. One of the best-known examples of a migration hump occurred between Mexico and the US between the mid-1990s and the 2008-09 recession in the wake of NAFTA.

The Mexico-US migration hump illustrates how a pre-existing migration flow can increase as a result of policies that accelerate development and raise people’s expectations.

NAFTA was the first comprehensive trade and investment agreement between a developing and industrial country. Political leaders in both Mexico and the US promised that, as it became easier for Mexico to send goods to the US, fewer Mexicans would enter the US illegally.

However, the free trade and investment facilitated by NAFTA speeded up changes that were already underway in Mexico, such as rural youth leaving small farms that could not provide them with hope for upward mobility. The expectations of many Mexicans for higher incomes due to NAFTA collided with a sharp peso devaluation in 1994-95 that encouraged over a million Mexicans a year to move illegally to the US.

The number of Mexicans apprehended just inside the US border peaked at 1.6 million in FY00 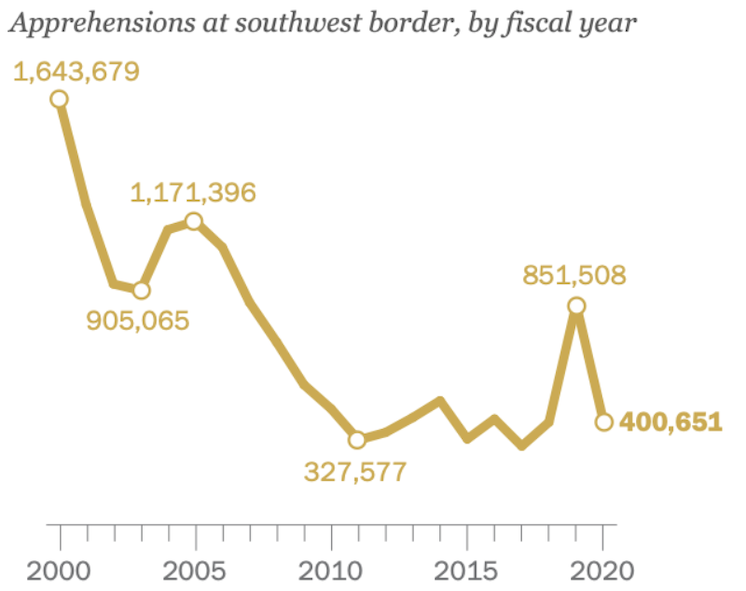 The number of unauthorized Mexicans in the US peaked at almost seven million in 2007, and has since dropped to less than five million as border enforcement increased and economic conditions in Mexico improved. 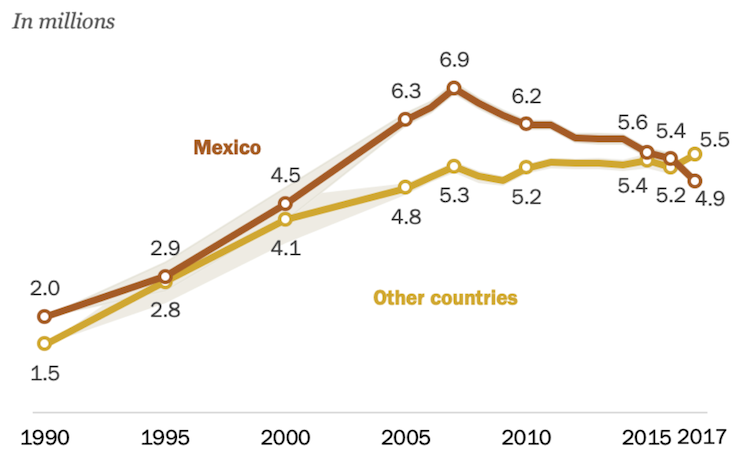 The migration hump visualizes how migration can rise in the short term as countries adopt policies that promote development in the long term. Faster development is a type of no-pain no-gain exercise, so governments that aim to help their poorer neighbors that are sources of unwanted migrants should recognize that they may receive more rather than fewer migrants in the short term.

If the migration hump is not anticipated or managed, host country populations can turn against trade and migration, as occurred in the 1990s in the US when labor unions opposed NAFTA and California voters approved Prop 187 as unauthorized migration rose during recession.

Development is disruptive, and people may be made worse off as a result of freer trade and investment, as when formerly protected industries shrink as imports rise. Imports may increase quickly, while time may be required to create new jobs in new industries.

For example, as low-cost US corn flooded into Mexico in the 1990s, many rural youth realized that they could never rise economically if they followed in the footsteps of their parents and grandparents, prompting some to migrate illegally to the US. Corn imports did not “displace” rural Mexicans, since many were struggling subsistence farmers before corn imports rose, but cheaper US corn made it clear to youth considering their future that producing corn on small farms that depended on erratic rainfall would not lead to upward mobility.

As the US considers how to deal with the root causes of migration in Central America, and as European countries try to speed development in Africa to deter unwanted migration, there may be migration humps from Central America and Africa. The lesson of the migration hump is that the same freer trade and investment policies that accelerate development in the long run can increase migration in the short term. Governments that sign free-trade agreements should acknowledge the possibility of a migration hump by making plans to deal with the unwanted migration that can accompany freer trade and investment.

SDGs. The UN in September 2015 endorsed 17 Sustainable Development Goals to be met by 2030. This Agenda 2030, which superseded the Millennium Development Goals adopted in 2000, aims to end poverty and hunger, ensure healthy lives and education, achieve gender equality and inclusive economic growth, ensure safe water and cities, and make the global economy and biosphere sustainable.

The SDGs have 169 target indicators that allow citizens to measure their country's progress toward becoming just, peaceful, and inclusive societies. Goal eight is inclusive and sustainable economic growth that generates full and productive employment and decent work for all. Target Indicator 8.8 calls on governments to protect the labor rights of all workers "including migrant workers, in particular women migrants."

The SDGs call for safe, orderly and regular migration

Goal 10 is to reduce inequality within and among countries. Target 10.7 calls on governments to "facilitate orderly, safe, regular and responsible migration and mobility of people, including through the implementation of planned and well-managed migration policies." Target 10c calls for reducing "to less than three percent the transaction costs of migrant remittances and eliminate remittance corridors with costs higher than five percent" by 2030.