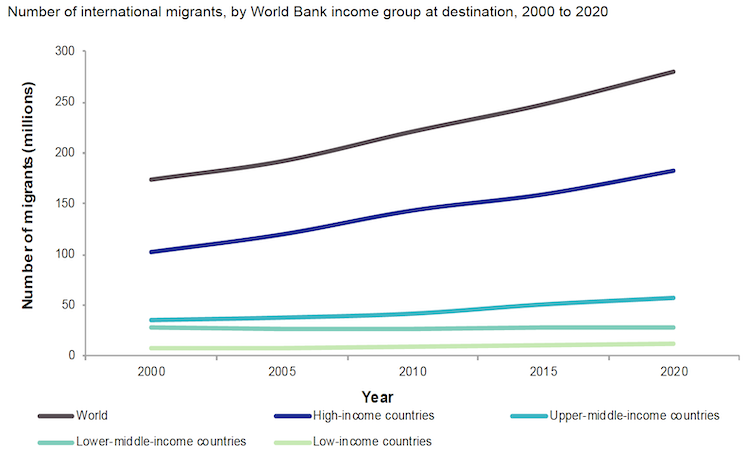 International migration has three major features. First most migrants move from poorer to richer countries, and the top 10 senders and receivers account for over half of the total. Second, migration patterns are becoming more complex, as more migrants arrive in industrial countries as temporary workers or visitors and settle, and as more migrants move from a poorer to a richer developing country, so-called south-south migration. Third, migration affects the people and economies of both sending and receiving areas, but migration’s effects vary over time and across and within countries.

Flows. Most international migrants move short distances, from one country to another within a continent. On migration corridor maps that chart movements by world regions, the thickest arrows represent intra-region migration, as within Africa, Europe, and Eastern Europe. Significant flows between regions include Latin America to North America and Southern Asia to Western Asia.

Most international migrants stay within a region (2010-15 flows) 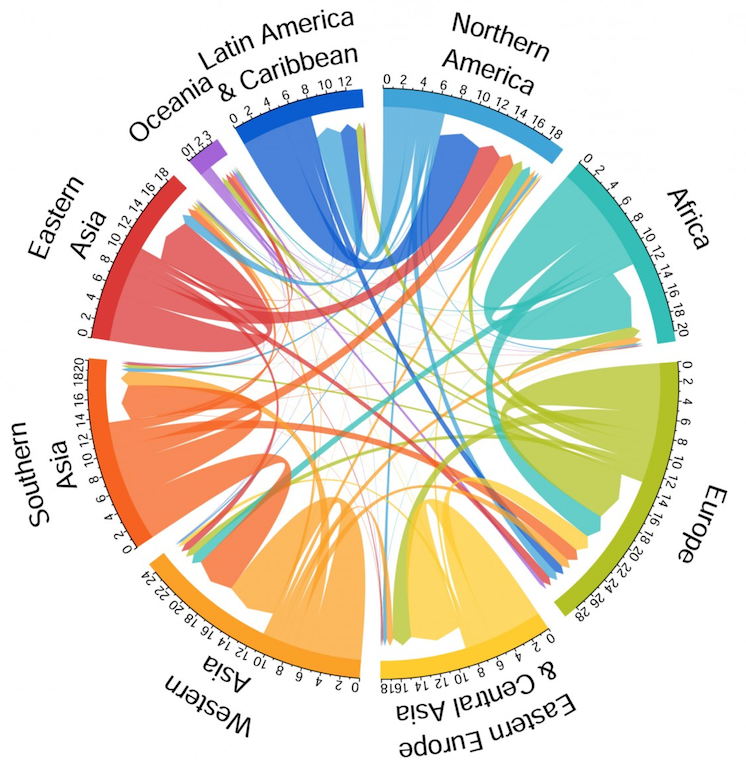 Europe had 87 million international migrants in 2020, followed by Asia with 86 million, Northern America with 59 million, and Africa with 25 million. 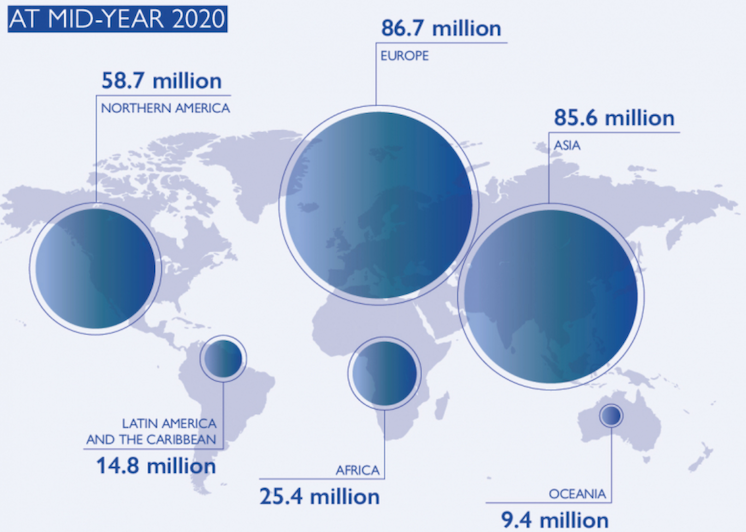 The UN considers Singapore and GCC countries to be developing

The World Bank defines high income countries as those with per capita incomes of $12,500 or more in 2019, and they had 182 million or 65 percent of international migrants. Note that the World Bank calls Argentina, Russia, and Venezuela former high-income countries.

Most migrants, 177 million, are from middle income countries including China, India, Mexico, and Russia. Migrants from China and India are dispersed across many countries, while migrants from Mexico are concentrated in the US.

Half of international migrants are in 10 countries. The US has 51 million migrants or 19 percent of the total (the UN considers Puerto Ricans who have moved to the mainland to be international migrants), followed by Germany and Saudi Arabia, 13 million each, Russia, 12 million, the United Kingdom, 10 million, the United Arab Emirates, 9 million, France, Canada, and Australia, 8 million each, and Italy, 6 million.

A third of international migrants originate from ten countries, led by India with 18 million persons abroad and followed by Mexico with 12 million, China, 11 million, Russia, 10 million, and Syria, 8 million.

Patterns and Effects. Migration once meant leaving one country, settling in another, and never returning to the country of origin. Today migrants often move between countries, staying abroad for a few months or years before returning, which heightens their impacts in sending and receiving areas.

In the past, governments that attracted settler migrants specified priorities for entry, such as family unification in the US or points systems in Australia and Canada. This means that US residents would sponsor their relatives abroad for immigrant visas, while foreigners would apply for immigrant visas that would allow them to migrate to Australia and Canada. Only foreigners who receive sufficient points for their youth, education, knowledge of English or French, and having a local job offer get immigrant visas.

The fact that most immigrant visas go to foreigners already in the country means that immigration gatekeepers are shifting from consular officials adjudicating immigrant visas abroad to employers and universities in the destination countries who select guest workers and students, some of whom later adjust status and become immigrants.

The fact that immigrants are already in the country changes their impacts. Many foreigners have been in the destination country for five or 10 years before becoming immigrants. Increasingly, immigrant visas are the “prize” for foreigners who satisfy their employers as guest workers or pay tuition and complete a program of study that can lead to several years of optional practical training followed by more years as a guest worker and finally an immigrant visa.