Between 1945 and 1989, the monthly Current Population Survey added a supplement in December that asked if anyone in the household did farm work for wages. CPS interviewers obtained information from household members on how many days were worked and earnings.

These CPS data, published in USDA Hired Farm Work Force reports, found about 2.5 million hired farm workers in the 1980s, including almost a million who were casual workers who did less than 25 days or about three weeks of farm work and 700,000 workers who each did at least 150 days of farm work. The casual workers were 40 percent of all farm workers, but did less than five percent of the days of work performed by hired workers.

California sponsored a study of all workers (Social Security Numbers) reported by farm employers in 1965, and found that a third of the 742,000 earned less than $100 ($815 today) from farm work, meaning they likely did less than two weeks of farm work.

As with farm structure, where many small farms contribute little to total farm output and a few large farms account for most farm sales, the numerous casual workers in the CPS and in the CA study did a small share of all days of farm work. The regular and year-round workers were less than a third of all farm workers, but they did over two-thirds of all farm work.

Social Security Numbers are an imperfect measure of farm workers for several reasons. Some individuals use a different SSN with each employer, sometimes so that they can work under one SSN and draw UI benefits under another. In some cases, several workers may share one SSN. There should be fewer cases of multiple SSNs as more workers settle in one place and have just one farm employer a year, and fewer cases of several workers sharing one SSN with fewer children employed in agriculture. However, employers continue to report a large number of SSNs, raising questions about the link between farm workers and SSNs.

CPS. The CPS is a household-based survey, meaning that members of a sample of households are interviewed, and sample data are expanded to estimate the number, distribution, and characteristics of farm workers.

CPS data in the 1980s found mostly casual and seasonal farm workers. One third of workers did two-thirds of all farm work 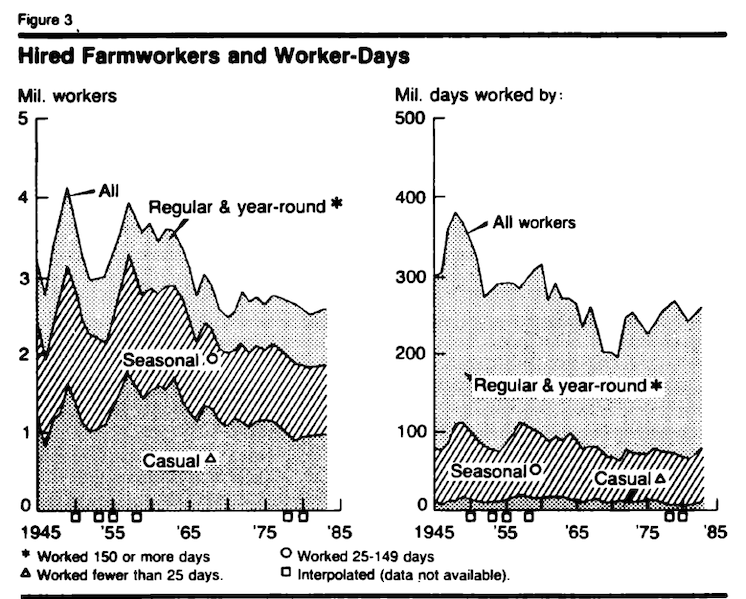 Casual workers are most numerous, but they accounted for a small share of farm work days in 1983

NAWS. The farm workforce may be changing to include fewer casual workers. The NAWS interviews workers who are currently employed in agriculture, and they can be ranked by their days of farm work. Each percentile of NAWS workers who were interviewed represents the average days worked of about 20 California and 48 US (including CA) workers in 2015-16. 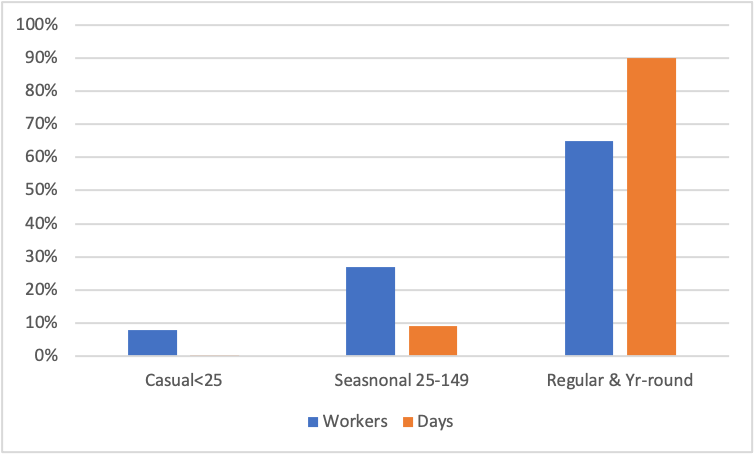 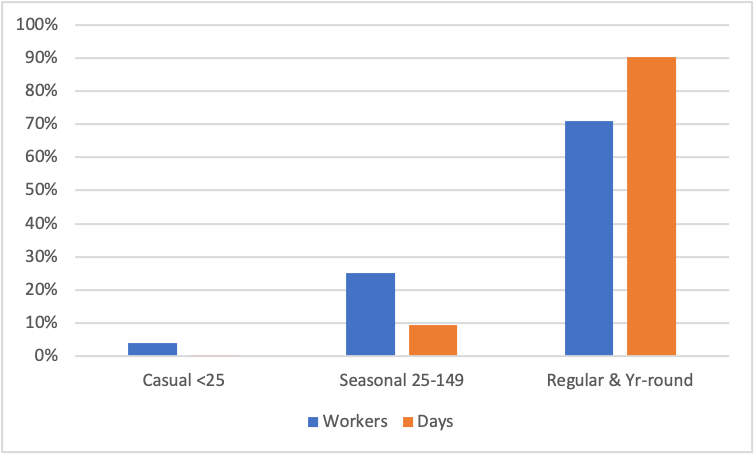 SSNs. California employers report employment and earnings when paying their unemployment insurance taxes. The NAWS finds a committed and professional farm workforce that is mostly employed in farm work, allowing fewer workers to accomplish the state’s farm work. The UI data, on the other hand, find a rising number of unique Social Security Numbers reported by California farm employers.

Average employment, measured by employees on the payroll for the period covering the 12th of the month and divided by 12 months, rose between 2014 and 2016, but the number of unique SSNs rose faster, so that the ratio of SSNs to average employment rose from two to 2.5. 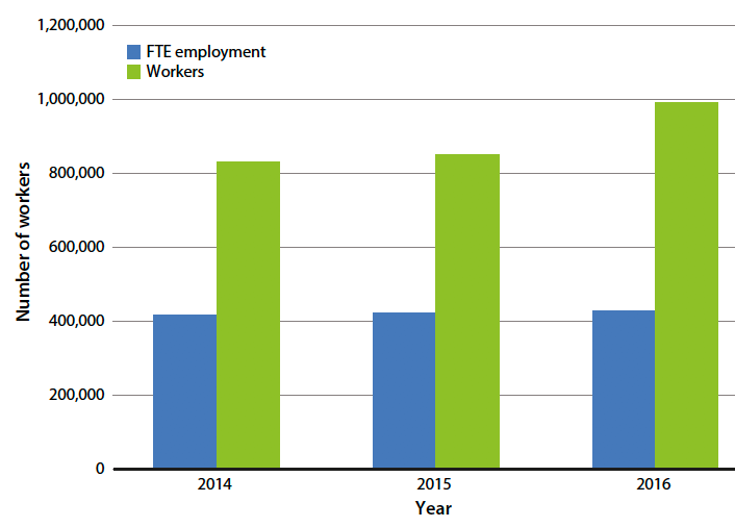 545,000 SSNs were reported to EDD only once by agricultural employers in 2016

EDD assigns SSNs to the employer or NAICS code where that SSN had its highest California earnings, so that dairy, grape, and FLC employees can be identified. Over three-fourths of the SSNs reported by livestock, mushroom, and nursery employers had only one job during the year, and 70 percent of employees whose highest wage jobs were with FLCs had only one job. However, less than 65 percent of strawberry, orange and vegetable workers had only one job in 2016. If berry, citrus, and vegetable workers with multiple jobs used a different SSN for each job, they would increase the number of unique workers and distort averages.

Agricultural employers in Kern county reported the most SSNs in 2016, 150,000, followed by 112,000 SSNs reported by farm employers in Fresno county and 101,000 in Monterey county. In each county, farm labor contractors reported the most SSNs. In Kern county two-thirds of all SSNs were submitted by FLCs, compared with half of the SSNs submitted in Fresno county and 40 percent of those submitted in Tulare county. If workers use different SSNs for each FLC for whom they work, EDD data show more farm workers and lower average earnings for FLC employees than is really the case.

These data refer to weeks worked with one employer. If workers change employers (and SSNs), they would accumulate more weeks of work and make these average weeks calculations too low.

Perspective. The CPS and NAWS portray very different workforces. The CPS found that over half of all hired farm workers in the 1980s were high school students and housewives who did less than 25 days of farm work and were not normally in the labor force. The NAWS finds mostly workers who do 150 or more days of farm work each year.

There have been many changes in the US labor market and US agriculture that could explain the shrinking role of casual and short-season farm workers. There are fewer youth in many agricultural areas, and women who work for wages are often employed in nonfarm jobs and not available to fill seasonal farm jobs. There are fewer institutions to match local workers with seasonal jobs, such as high schools that once organized detasseling crews for seed-corn companies in the Midwest and special units of the Employment Service to place individual workers and FLC crews in seasonal farm jobs.

Many farms employ more workers for longer periods by planting vegetable crops every week in order to harvest lettuce and other leafy greens year-round, so that seasonal workers in the Salinas Valley can work at least seven months or 175 days a year in the Salinas area, and more days if they move to other production areas. Similarly, strawberries are picked twice a week during a long Salinas season, enabling workers who may have had to migrate in the past to obtain more-than-150-days of farm work to do so without moving.

Some fruit crops also employ fewer workers for longer periods. Apples are pruned in winter, thinned in spring, netted in summer to reduce damage from birds, and harvested in the fall, and similar pruning, leafing, and thinning processes occur before wine grapes are harvested. With a higher share of workers employed for longer periods on one farm in one area, a higher share of farm workers can find more than 150 days of farm work a year in one location.

The federal government’s Migrant and Seasonal Farm Worker (MSFW) programs established in the 1960s were based on the CPS-portrait of farm workers that imagined mostly casual workers but also some migrant families who moved from one state to another. At a time when labor-saving mechanization was expected to reduce the number of farm jobs quickly, as occurred as the processing tomato harvest was mechanized in the 1960s, the goal of many MSFW programs was to prepare migrant farm workers and their children for nonfarm jobs.

A half-century later, few farm worker families move long distances to do farm work. Instead, the NAWS portrays a settled crop workforce that lives in owned or rented housing off the farm, commutes to work in car pools, and lives with families that often include US-born children who, after being educated in the US, rarely follow their parents into the fields. The NAWS finds that most crop workers have only one farm employer each year, but that farm employer may be a labor contractor or custom harvester, so that a worker may be employed on many farms during the year.

There are several implications of the changing farm workforce: