How many farm workers are there in each state? This is a surprisingly difficult question to answer. A farm worker is usually defined as a person who works for wages on a farm, whether for one day or for 365 days. There are many types of farm workers, from field workers who harvest crops for a few weeks or months to equipment operators and irrigators to supervisors, mechanics, and those who work with animals year-round.

Bottom up. The federal government distributes at least $1 billion a year to support migrant and seasonal farm workers (MSFWs) and their dependents, most via the Big 4 programs of Migrant Education, Migrant Heath, Migrant Head Start, and the National Farmworker Jobs Program. These programs serve a fraction of the MSFWs that are believed to be eligible for services. However, each program has a different definition of who is eligible for services, and each uses a different methodology to estimate the distribution of eligible MSFWs in order to distribute federal funds across states.

Some programs use bottom-up surveys to estimate the number of eligible MSFWs, which means that they begin with MSFWs and their children who receive services or are identified as eligible for services and multiply by a factor to account for other MSFWs. However, such studies lack a reliable factor for multiplying.

Other bottom-up studies begin with the acreage of various commodities by county, estimate the hours per acre needed to produce and harvest them, and divide by average hours worked by each worker to estimate the number of farm workers by commodity and state. The result was an estimated 732,109 MSFWs in California in 2000, plus 570,000 dependents.

Bottom-up studies were examined in 1988 and 1994 books and rejected as a reliable estimation method. Bottom-up studies that begin with MSFWs who receive services have difficulty developing reliable multipliers to move from those being served to the universe of MSFWs who are eligible for services. Studies that begin with acreage and hours worked have difficulty accounting for the variance in production methods, and find it very hard to develop a reliable indicator of average hours worked by those employed in each commodity.

Top-down. Top-down farm worker estimation strategies begin with the most reliable data available, often farm operator expenses incurred by employers for workers that are hired directly and for contract labor brought to farms. These labor expense data from the Census of Agriculture (most recent is 2017) can be converted into hours worked by dividing them by the average hourly earnings of US crop workers ($11.99 in 2017 from the NAWS) and US livestock workers ($12.38 from the FLS).

This top-down method generates an estimate of 1.6 million US crop and 510,000 US livestock workers in 2017, for a total of almost 2.2 million US farm workers. 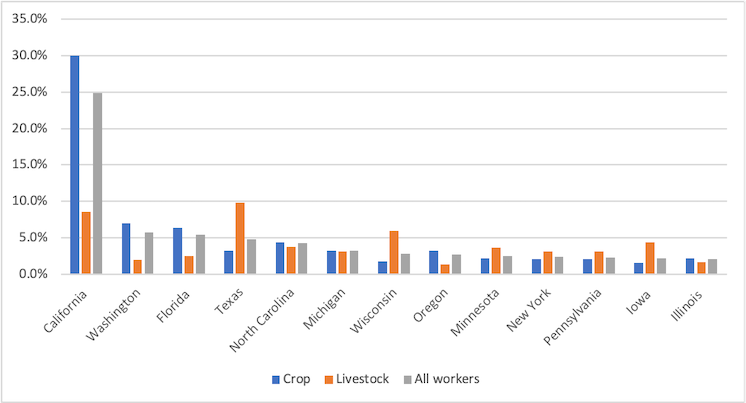 Changes. Applying the same top-down methodology to COA labor expenses in 2002, 2007, and 2012 shows remarkable stability in the total number of farm workers, about two million, and the distribution of farm workers across states, including a quarter in California. There were 12 to 16 states that each had two percent or more of all US farm workers, and collectively they had 65 to 70 percent of all farm workers.

The share of farm workers in FL and TX fell between 2002 and 2017, while the share in WA and NC rose 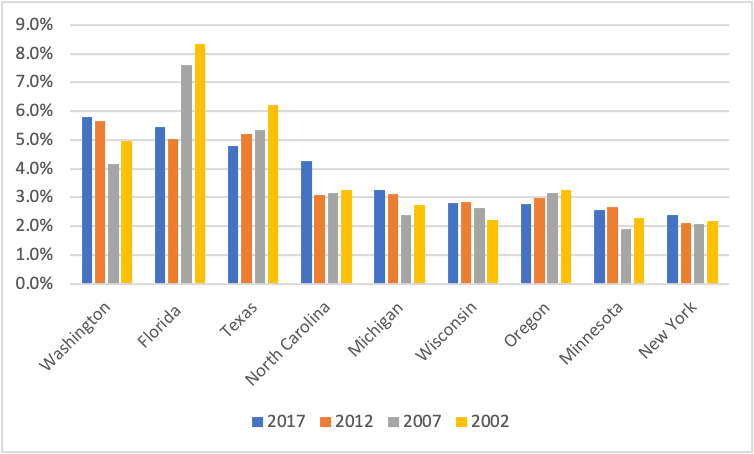 The National Center for Farmworker Health relies on a variation of the top-down method that divides COA labor expenses for directly hired workers by the number of jobs reported by farmers who hire workers directly. Farmers reported almost $32 billion in expenses for 2.4 million directly hired workers in the 2017 COA, making the average cost per worker or job $13,120.

NCFH divided the $7.6 billion in contract labor expenses by the same $13,120 to estimate an additional 580,000 jobs for contract workers, for a total of almost 2.9 million jobs.

The COA counts jobs rather than workers, so that one worker employed and reported by two farms is counted twice. COA labor expenses include payments to relatives of the owner and for all types of workers, and include the cost of payroll taxes and employee benefits.

Perspective. During the 1960s, the federal government launched programs to help MSFWs and their children to prepare for nonfarm jobs at a time when labor-saving mechanization was expected to reduce the number of farm jobs. Migrants who moved from one state to another were considered to be a special federal responsibility because many states had residency requirements that limited the eligibility of migrant farm workers to safety net programs. These residency requirements were declared unconstitutional by the US Supreme Court in Shapiro v Thompson in 1969, but the migrant programs expanded to cover both migrant and seasonal workers and continued.

MSFW program administrators commissioned studies of the number of eligible MSFWs to justify requests for funding at a time when manual farm work was believed to be shrinking rapidly. For example, a major DOL-funded study predicted in 1970 that “the farm labor force of the future will consist of a core of skilled and semi-skilled men operating farm machinery supplemented seasonally by unskilled manual laborers, mostly local housewives and school-age youths.” (Cargill and Rossmiller, 1970, p18).

The sense that MSFWs would soon disappear justified the lack of effort to develop reliable methods to estimate the number and distribution of MSFWs. Even as MSFW employment rose during the 1980s and 1990s with expanded production of fresh fruits and vegetables, many programs continued to use ad hoc methods to estimate those eligible for services. Instead of bricks building a stronger wall, the ad hoc surveys used a wide variety of methods, so that most new studies reviewed and rejected previous methodologies.

Top-down strategies have become dominant in the 21st century. They begin with reliable data, make adjustments that are transparent, and can be updated as new data become available. They show that the US has about 2.2 million farm workers, including almost three fourths employed on crop farms and a quarter in California.