Remittances to low- and middle-income developing (LDC) countries were $540 billion in 2020, down slightly from 2019, and are expected to top $550 billion in 2021. Excluding China, which attracts the most foreign direct investment among developing countries, remittances to LDCs in 2020 exceeded FDI and official development assistance (ODA) combined.

There are three major reasons why remittances did not drop as expected during the pandemic in 2020. First, many migrants were essential workers and encouraged to continue to work in person in agriculture, retail, and other jobs. Some governments opened otherwise closed borders to admit migrant workers to fill farm and health care jobs.

Second, governments in many countries that host migrants enacted safety net programs that preserved jobs and incomes, enabling migrants to continue to send money to families at home from both their earnings and income support. Third, with less international travel, some money that would have been carried home personally was sent via banks and transfer services, increasing the share of remittances that was transferred via formal channels.

Remittances to LDCs have exceeded ODA since 1997, and exceeded FDI since 2018 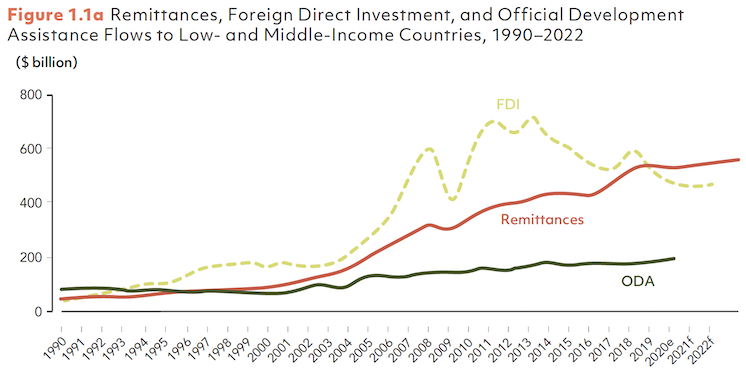 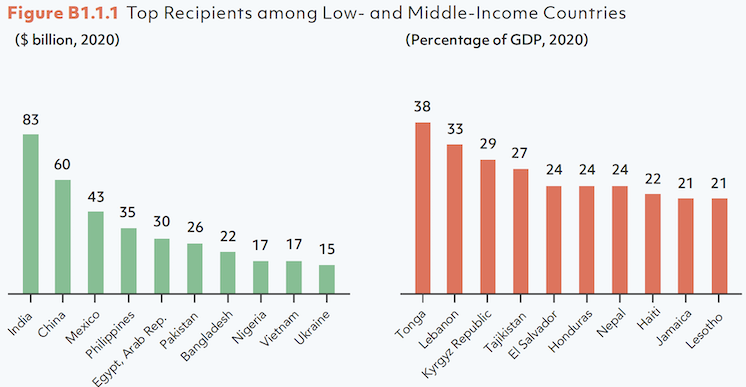 In Latin America, Mexico receives more remittances than the next seven countries combined. However, remittances are the largest share of GDP in El Salvador and Honduras, almost 25 percent, followed by Haiti and Jamaica at over 20 percent.

Mexico receives the most remittances, but El Salvador and Honduras are most dependent on remittances

The US has the most migrants, almost 51 million according to the UN, which counts Puerto Ricans who move to the mainland as international migrants, followed by Germany with six percent of global migrants, Saudi Arabia with five percent, and Russia with four percent. Economic growth is expected to be five percent or more in the major migrant-destination countries in 2021, which should increase the demand for migrant workers and lead to more remittances.

The combination of faster US economic growth and persisting recession in Latin America may fuel more unauthorized migration to the US. Apprehensions of and encounters with unauthorized foreigners along the Mexico-US border fell sharply in 2020. Those who were apprehended were usually returned immediately to Mexico under public health rules aimed at keeping covid out of the US, which increased apprehensions as many tried to re-enter the US. Apprehensions and encounters approached 200,000 a month in 2021, on track for more than a million apprehensions for the year. 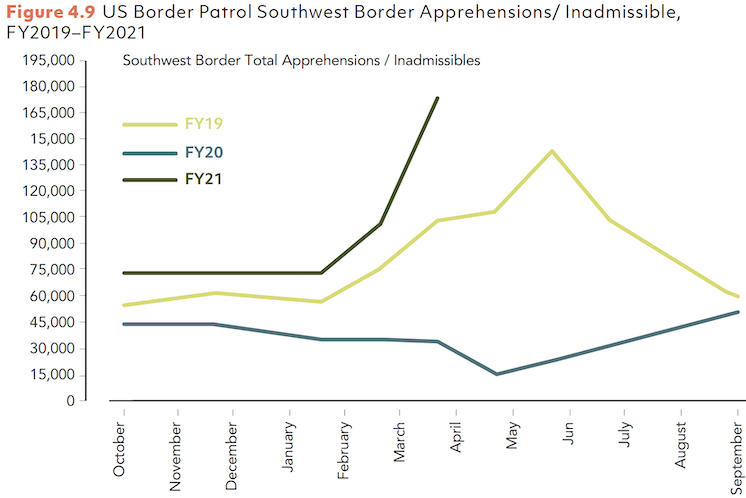 The impact of lower oil prices and government policies that aim to reduce dependence on migrant workers are visible in Saudi Arabia, where the number of registered foreign workers fell from almost 8.5 million in 2017 to 6.5 million in 2021.

The 17 UN Sustainable Development Goals announced in 2015 aim to achieve “a better and more sustainable future for all.” Each goal has 8 to 12 targets and several indicators to measure progress toward reaching the target within countries and globally.

SDG indicator 10.c.1 aims to reduce the cost of sending remittances to three percent of the amount transferred. Remittance costs were twice the SDG goal at 6.5 percent of the amount transferred in 2020, so that the average cost of sending $200 was $13. Remittance transfer costs are lowest in South Asia at under five percent, and highest in Sub-Saharan Africa at over eight percent. 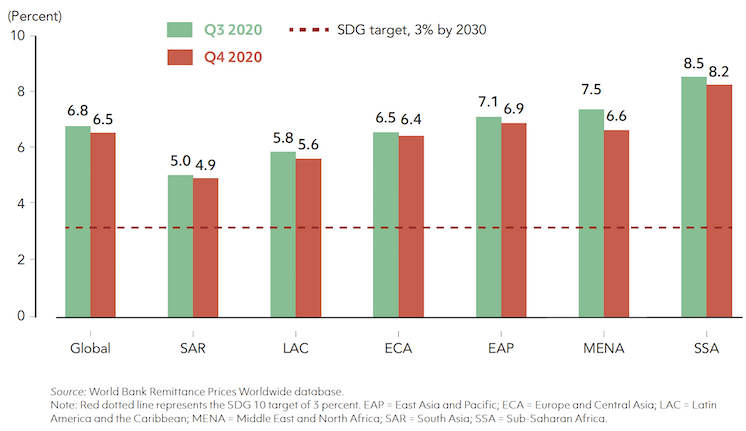