Hired Labor in US Dairies

Mammals feed their young milk until they can digest solid food; humans are almost unique among mammals in continuing to drink milk as adults. The US produces the most milk from dairy cows, followed by India, China, Brazil, and Germany. 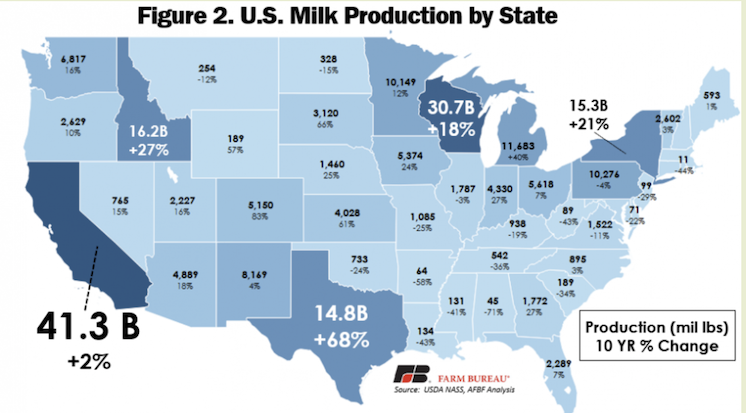 Dairies. The Census of Agriculture (COA) reported that the US had 54,600 dairy farms with 9.5 million cows in 2017. Over the past several decades, dairy cows have been concentrated on fewer and larger farms. The 2017 COA reported that: 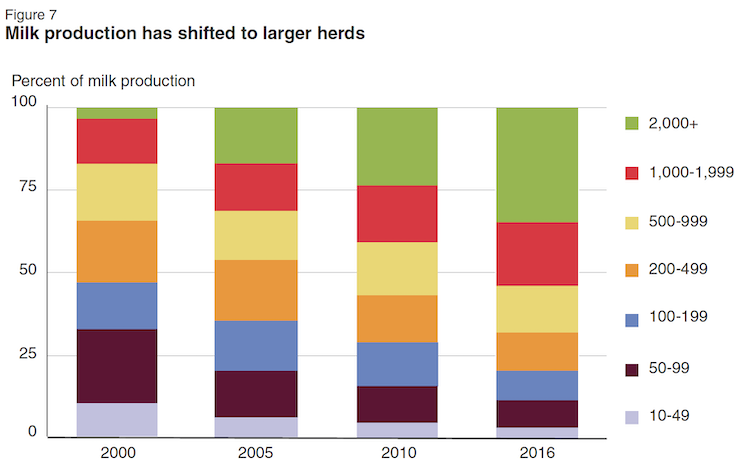 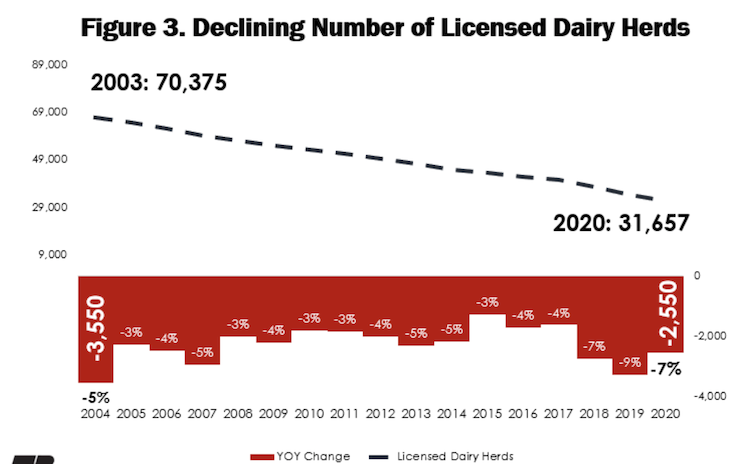 The cost of producing milk declines as herd size increases 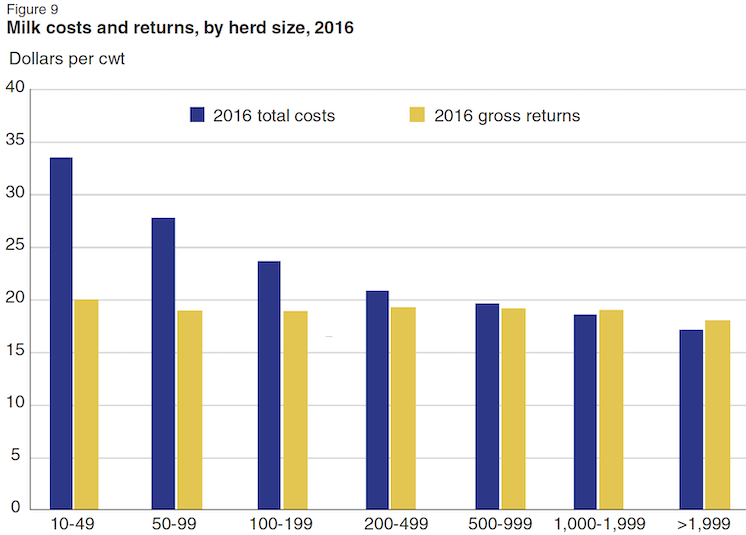 Hired Labor. The COA groups farms by their North American Industry Classification System, and dairy farms are in NAICS 11212. Some 23,175 US dairies reported $3.9 billion in expenses for hired farm labor, including 3,587 dairies with $250,000 or more in labor expenses. Labor represented an average 12 percent of production expenses on dairy farms.

The Quarterly Census of Employment and Wages provides data on dairy farm employment and wages paid to dairy employees. QCEW data are drawn from unemployment insurance payroll tax data. Farm employers who employ 10 or more workers in each of 20 weeks of a quarter, or who paid $20,000 or more in quarterly wages, in the current or previous year must enroll in their state’s unemployment insurance system. Some states including California and Washington require practically all farm employers to enroll.

When paying UI taxes, employers report employees on the payroll for the period that includes the 12th of each month and all earnings for all workers during the quarter. The QCEW data show that 7,005 US dairy establishments hired an average 106,840 workers and paid them an average $724 a week in 2019, for a total wage bill of $4 billion. The number of dairy establishments and average employment have been rising as US dairy farms become fewer and larger.

Hired labor costs rise with herd size until 2,000 cows, and then fall for larger dairies

As herd size increases, the importance of unpaid family labor declines and the importance of hired labor increases. For example, on farms with under 50 cows, unpaid labor accounts for 97 percent of total labor costs, while on farms with 2,000 or more cows, unpaid labor accounts for five percent of total labor costs. Note that small dairies self-report their hours worked, and USDA estimates the value of unpaid diary family time by using education, age, and other personal characteristics to estimate that family workers would have earned $20 to $30 an hour, more than what hired workers on dairies are typically paid, if they had worked.

Texas A&M. Researchers at Texas A&M sent 5,000 surveys to dairy farms in 2014 and received 1,000 usable responses to study immigrant workers in US dairies. A third of the responding dairies had 1,000 or more cows, including a sixth that had 2,000 or more cows.

The researchers estimated that there were 150,400 employees on US dairies in 2013, including three-fourths who were employed full time. Over half or 77,000 US dairy employees were born outside the US, so that a typical dairy with 5.1 employees had 2.6 foreign-born and 2.5 US born employees. The Texas A&M researchers reported that immigrant workers are more likely than US-born workers to be full-time employees. 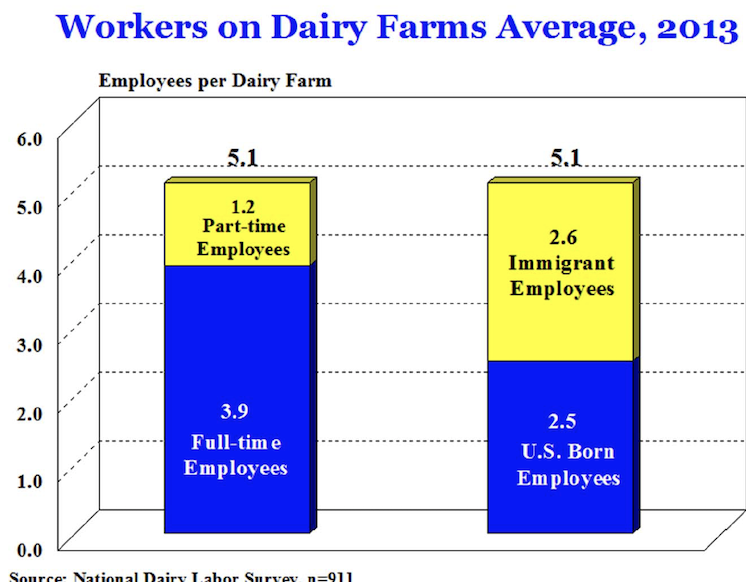 Dependence on hired workers increases with the number of cows. Two-thirds of the respondents had fewer than 1,000 cows, which may explain why only a third of the responding farms reported hiring immigrant workers. The farms with immigrant workers were larger, which is reflected in the fact that they produced almost 80 percent of US milk.

Texas A&M survey: the 1/3 of dairies with immigrant workers produced almost 80% of US milk 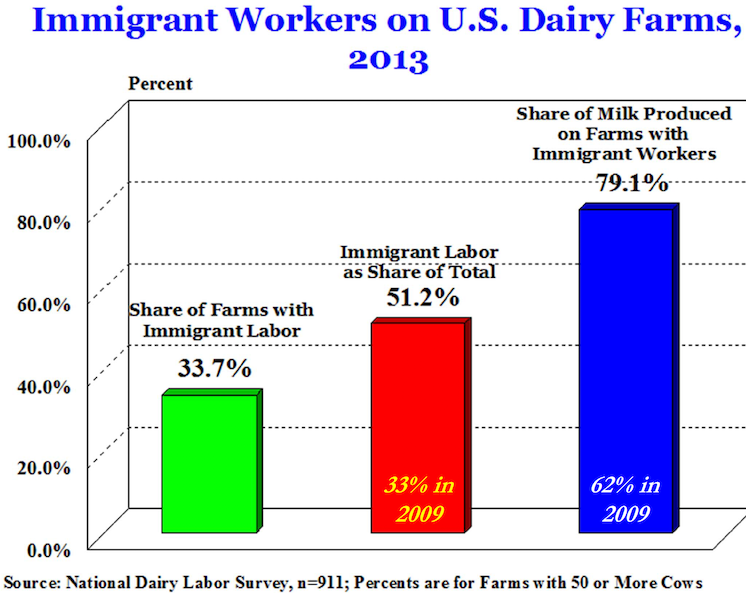 Texas A&M survey: 39% of dairies had low confidence in employee-presented documents, and 21% were concerned about immigration enforcement

The Texas A&M researchers estimated that eliminating half of the foreign-born workers in US dairies would reduce the number of dairy cows and raise retail milk prices, with multiplier effects due to less milk being transported, processed, and sold. Survey respondents reported 13 percent employee turnover, meaning that a dairy with an average 10 employees would issue 13 W-2 statements a year.

Marketing. Raw milk is 87 percent water, four percent fat, and nine percent skim solids. Milk is transported by truck from farms to processors in bulk tanks and bottled for fluid milk or manufactured into cheese or other dairy products.

The leading US milk processors in 2019 were Nestle, Montreal-based Saputo, Dean Foods, Danone, and Kraft-Heinz. Each has many labels, and many processors bottle private-label milk for supermarkets. Over half of US milk is marketed by dairy cooperatives, that include Kansas City-based Dairy Farmers of America, Minnesota-based Land O’Lakes, and Visalia-based California Dairies.

The US dairy industry is increasingly dependent on exports. Dairy exports measured in total milk solids were record 2.1 million tons in 2020, representing a sixth of US milk production. Mexico is the largest export market for US dairy exports, followed by Southeast Asia, Canada, and China. NZ is the world’s leading exporter of dairy products, accounting for 22 percent of global dairy exports, followed by Germany, 10 percent, the Netherlands, 8.4 percent, and the US, 6.7 percent.

The number of dairy cows is stable, but milk production per cow continues to increase 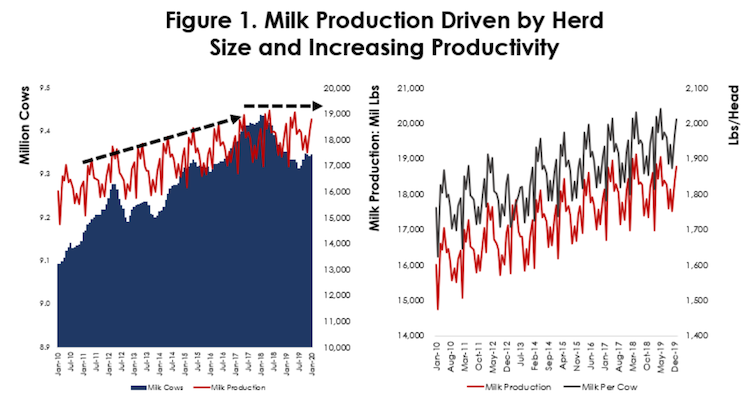