Farm Labor: Employment Down, Wages Up

US farm employment fell and hourly wages rose between April 2020 and April 2021. The fall in employment was sharpest in Florida, down 26 percent, and the increase in wages was largest in California, to $17.25 an hour.

FLS. USDA’s Farm Labor Survey found that the employment of directly hired workers fell 11 percent between April 2020 and April 2021. The drop in farm employment was largest in Florida, down 26 percent, and was down 14 percent in California. 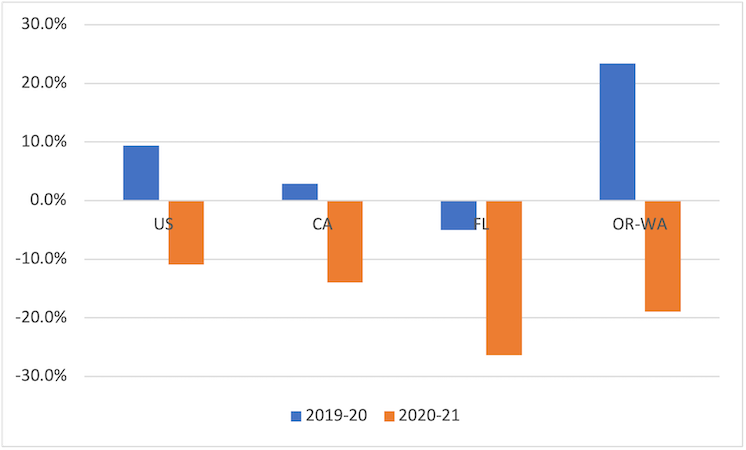 The FLS includes only workers who are hired directly by farm operators, which means that workers who are brought to farms by nonfarm employers such as farm labor contractors and farm management firms are excluded. Second, the FLS sample is relatively small, which can produce large fluctuations from year to year. For example, employment in OR and WA rose from 47,000 in April 2019 to 58,000 in April 2020 before falling to 47,000 in April 2021. These regional employment swings may reflect who responds to the FLS rather than farm labor market realities. 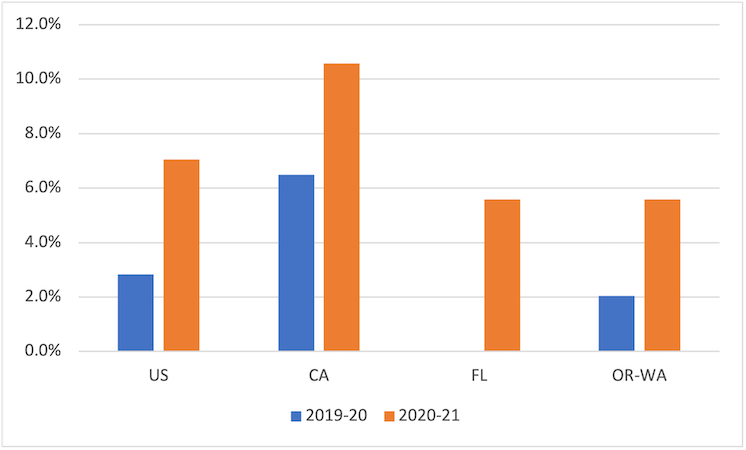 The FLS data highlight the decline in the employment of directly hired US farm workers. There were 737,000 directly hired US farm workers in April 2010, including 140,000 in California, which means there was a drop in direct hires of 20 percent for the US and 12 percent in California over the 2010-20 decade. Some of this decline reflects a shift from hiring workers directly to obtaining workers via nonfarm FLCs, that is, the workers are still in the fields, but are not in the FLS because they are employed by FLCs.

QCEW. The Quarterly Census of Employment and Wages provides a more comprehensive look at farm employment and wages. The employment data are the average employment of workers who were on the payroll for the period that includes the 12th of the month, and the weekly wages are what a full-time worker would earn.

The QCEW data are from the unemployment insurance system, and UI coverage varies by state. Federal law requires all farm employers who employ at least 10 workers on each of 20 days in 20 different weeks during the current or preceding calendar year, or those who paid cash remuneration of $20,000 or more in any quarter during the current or preceding calendar year, to enroll in their state’s UI system and report employment and earnings.

Some states including CA and WA require all farm employers to enroll and report the employment and earnings of their workers, including H-2A guest workers, while other states such as Florida do not, so QCEW data cover a variable share of farm employment across states. The QCEW estimated that wage and salary employment in US agriculture averaged 1.7 million in 2017, including 76 percent or 1.3 million that was reported by employers to state UI systems. 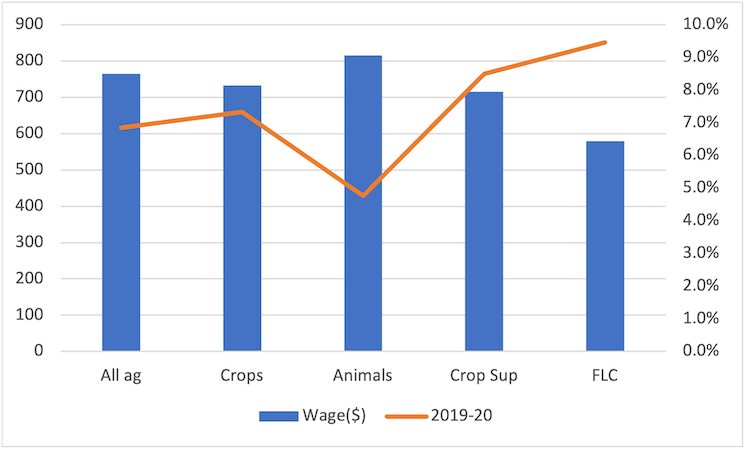 The QCEW data suggest that the covid pandemic reduced employment in crop agriculture, and that the drop in employment was concentrated among FLCs. Seasonal employment patterns did not change, peaking at 600,000 directly hired crop workers and 365,000 for crop support workers in June and July 2020. 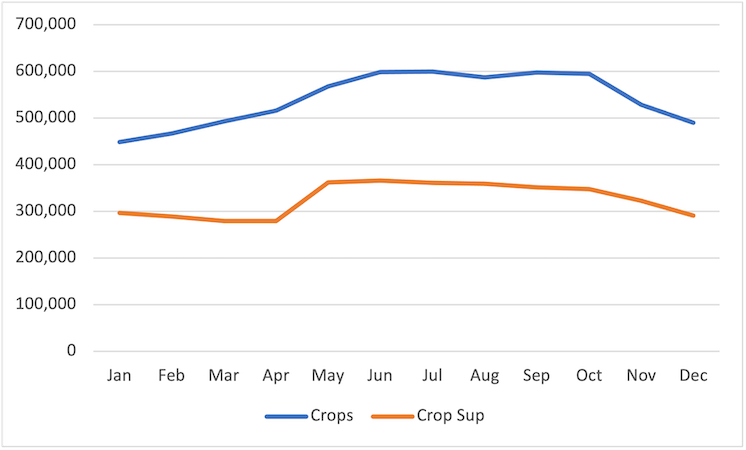 The QCEW publishes employment by size of establishment only for January through March and only for NAICS 11, not for crop and animal agriculture separately. There were 39 US agricultural establishments that each had 1,000 or more employees in the first quarter of 2020, and they had a total of 62,500 employees or an average 1,600 each. At the other extreme, 66,300 establishments, over 60 percent of all farm employers in the UI system, each had less than five employees and collectively had 110,000 employees, an average of less than two each.

Covid accelerated three changes in farm labor. First is the shift from direct to indirect employment in crop agriculture. There were 1.7 directly hired crop workers for each worker brought to farms by a crop support employer in 2020, but the ratio is falling as the FLC share of crop employment increases. Second is the jump in weekly wages between 2019 and 2020 in low-wage sectors, which shrinks the wage premium for working in animal agriculture.

Third is more agricultural establishments in the UI system. Average employment per establishment was 11 for crop farms in 2010 and 2020, but the average for animal farms rose from eight to 10 and for FLCs from 54 to 60.