An analysis of the labor law violations detected by federal investigators concluded that US firms can increase their profits by violating minimum wage and other labor laws because the probability of detection is low and the penalties for violations are small. Labor law enforcement depends on tight labor markets that help workers to reject jobs with employers who violate labor laws and empower worker to file complaints with enforcement agencies.

The employers most likely to violate labor laws are those that hire vulnerable workers with few other US employment options and thus do not complain about labor law violations.

The analysis found that violating the Fair Labor Standards Act (FLSA), which governs minimum wages and overtime, is profitable unless the probability of being detected is 80 percent or more. The probability of a firm being investigated is typically less than one percent because there are fewer than 1,000 federal labor law investigators for over 7.3 million US workplaces that employ 135 million workers. Violating the National Labor Relations Act (NLRA), which protects workers and unions, by firing union activists is profitable even if the chance of reducing unionization is as little as one or two percent.

Increasing compliance with labor laws requires more investigators to detect violations and higher penalties to raise the expected cost of violations, especially for violations of the NLRA. The business model of at least some employers is based on violating labor laws and avoiding investigations and the payment of back wages and penalties.

FLSA. Employers who fail to pay at least minimum wages can be ordered to reimburse underpaid workers for up to two years of wage underpayments, to pay an equal amount of liquidated damages to the shortchanged employees, and to pay civil money penalties to the US government. DOL can place a “hot goods” hold on goods produced in violation of the FLSA that prevents them from crossing state lines, and can refer repeat and egregious violators for criminal prosecution that carry fines of up to $10,000 and six months in prison.

Liquidated damages and CMPs are rarely assessed, and there are very few hot-goods holds and criminal convictions. Only an eighth of repeat and/or willful violators of the FLSA were required to pay penalties that exceeded the back wages owed to underpaid workers between 2005 and 2016. Between 2005 and 2016, when DOL investigators found 3,000 willful violations of the FLSA, there were 10 criminal convictions.

Most FLSA violators are first-time and committ non-willful violations

These enforcement data suggest that employers have significant incentives to violate the FLSA. A first-time violator whose chance of being deemed a willful violator and who underpays wages or overtime by $1,000 would need to believe that there is almost a 100 percent chance of detection in order to make compliance and payment of $1,000 cheaper than non-compliance and payment of $1,003. Even if the violator knew that the violation would be deemed willful, and that the median CMP would be assessed, there would have to be an 88 percent chance of detection to make the $1,000 lawful payment cheaper than the $1,140 in back wages and CMPs.

Some states have higher minimum wages and different overtime laws, and some have higher penalties for wage underpayments that are deemed “wage theft,” but the 700 to 1,000 state and local labor law compliance agents do not raise the overall risk of detecting labor law violations significantly.

Non-targeted or random federal investigations of employers in high-risk industries such as agriculture, fast food, garments, and janitorial services find violations at 40 percent or more of the firms investigated. At least $10 billion a year that is due to workers under federal and state minimum wage and overtime that is not paid. WHD recovers about $280 million a year in back wages and, with state enforcement and class actions, perhaps $1 billion a year or 10 percent of total underpaid wages may be collected via enforcement.

NLRA. Workers who are unlawfully fired for protected union activities are entitled to reinstatement and reimbursement of lost wages, but violating employers are not fined or otherwise penalized as a deterrent. One estimate suggests that unionization reduces the equity or market value of a firm by 10 percent or $60,000 per unionized worker due to higher labor costs and union rules. 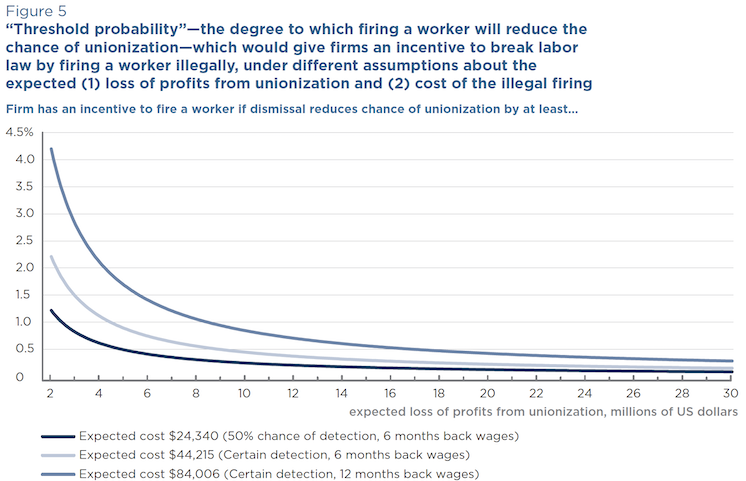 The rationality of firing pro-union workers is especially strong when employees are unauthorized, since they are not eligible for the wages they would have earned if they had continued to work. The US Supreme Court in a 5-4 decision in March 2002 ruled that an unauthorized worker's violation of immigration laws was more serious than an employer's violation of labor laws. The majority asserted that back pay for unauthorized workers “would encourage the successful evasion of apprehension by immigration authorities, condone prior violations of the immigration laws, and encourage future violations.”

Jose Castro, whose real name was Samuel Perez, presented a false Texas birth certificate to get a job at Hoffman Plastic Compounds in Los Angeles in 1988, and was fired unlawfully for handing out union authorization cards to fellow employees. Hoffman argued that, since it did not learn that Castro/Perez was unauthorized until he admitted his status in compliance proceedings, Castro/Perez was not owed back wages for the time he was out of work because he was not authorized to work in the US.

The National Labor Relations Board ordered Hoffman to provide Castro/Perez with $67,000 in lost wages, and the US Court of Appeals for the District of Columbia upheld the power of the NLRB to order employers to provide back-pay to unauthorized workers. The US government supported the NLRB and the Appeals Court, saying that back pay was necessary to prevent exploitation: "there is ... an inseverable connection between illegal immigration, the availability of jobs and poor working conditions that illegal immigrants are willing to take in the United States."

The US Supreme Court disagreed and denied back pay to unlawfully fired unauthorized workers despite its decision in the 1984 Sure-Tan case that unauthorized workers are protected by the NLRA: "If undocumented alien employees were excluded from. . .[NLRA] protection against employer intimidation, there would be created a subclass of workers without a comparable stake in the collective goals of their legally resident co-workers, thereby eroding the unity of all employees and impeding effective collective bargaining," that is, unauthorized workers must have NLRA protections so that employers do not prefer to hire and take advantage of them.

In the Sure-Tan case, the unauthorized workers were deported before the case reached the US Supreme Court. Unlawfully fired workers are normally entitled to reinstatement and back pay. The Supreme Court held that the Sure-Tan workers outside the US are not entitled to back pay because they were not available to work, and that if the NLRB ordered employers to reinstate unauthorized workers who were outside the US, there would be an incentive for foreigners to enter the US illegally and have a job waiting for them. 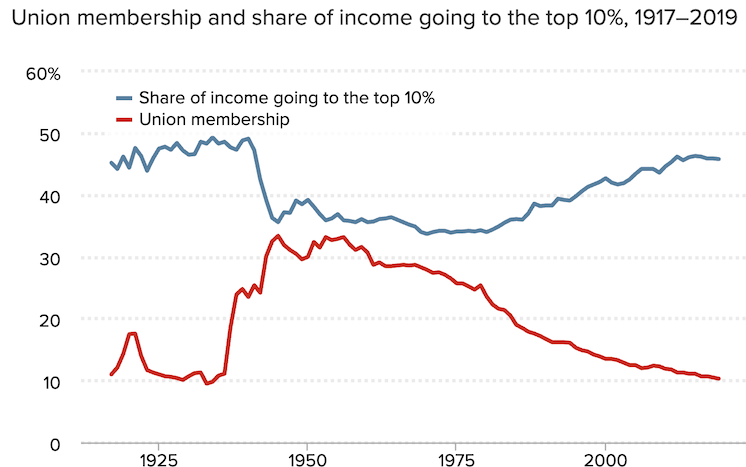