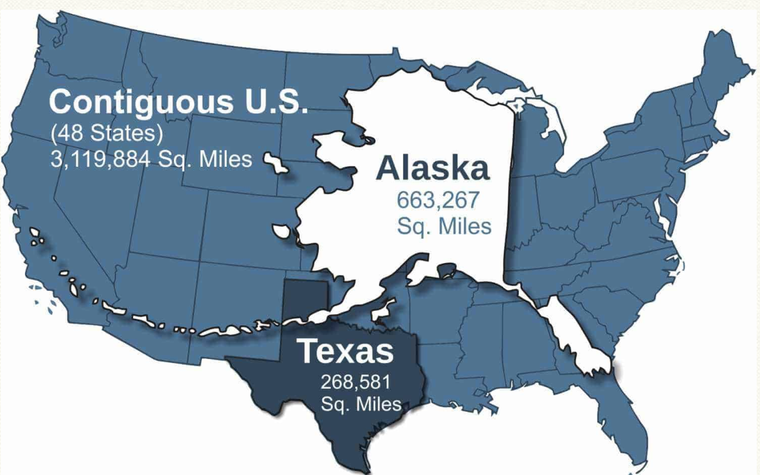 Alaska’s superlatives include Denali, which at 20,320 feet is the highest peak in North America. The 1,980 mile Yukon River is one of the world's longest navigable waterways but is crossed by only four bridges, compared with 130 bridges over the slightly longer Mississippi river. 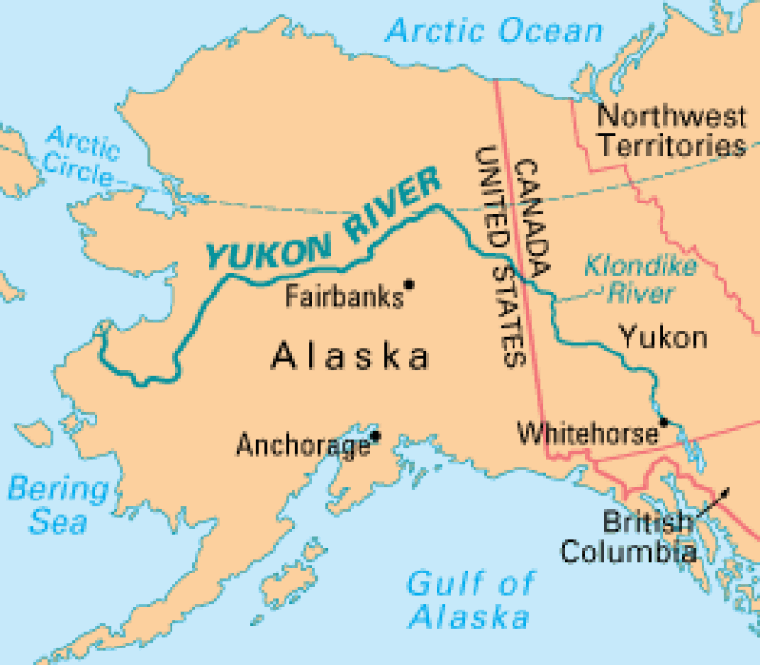 The federal government owns two-thirds of Alaska, the state government owns a quarter of the land, and Native American corporations own 10 percent; Doyon has 12.5 million acres. Only one percent of Alaska’s land is privately owned.

Alaska has a boom and bust economy based on natural resources, including fur, gold, and oil. The US produced 4.1 billion barrels of oil in 2020, a sixth of global production, including 44 percent in Texas and 15 percent from offshore wells in the Gulf of Mexico. ND and NM each accounted for 10 percent of US oil production followed by OK, CO, and AK, about four percent each.

Alaska depends on the federal government for jobs and on oil and gas for tax revenue. The federal government directly and indirectly accounts for a third of Alaska’s 330,000 jobs, while oil and gas royalties provide two-thirds of the state’s revenues. The Alaska Permanent Fund has over $80 billion in assets and makes an annual dividend payment to each resident, $992 in 2020.

The APF payment for 2021 is uncertain. The governor vetoed the $525 payment approved by the Legislature as too small and began a campaign for a constitutional amendment that would guarantee a dividend payment that is half of the annual payout from the APF or $2,350 in 2021, The other half of the annual APF payout would support state government services, which the governor wants to cut as oil revenues decline. Most sovereign wealth funds do not pay annual dividends, prompting some economists to urge an end to dividends and instead use APF earnings to maintain Alaska’s current state services no state sales or income tax.

Agriculture. Alaska has a short growing season of about 100 days and relatively few farms. The 2017 COA reported 990 farms and farm sales of $70 million, including $40 million from animal agriculture and $30 million from crops. The 13 farms that each had sales of $1 million or more accounted for over half of the state’s farm sales.

Most of Alaska’s farms are in the Matanuska Valley 40 miles northeast of Anchorage. During the 1930s, the federal Matanuska Valley Colonization project encouraged 200 midwestern farm families to become farmers around the city of Palmer. This effort failed because of the short growing season and the cost of transporting inputs to farmers and commodities to consumers. 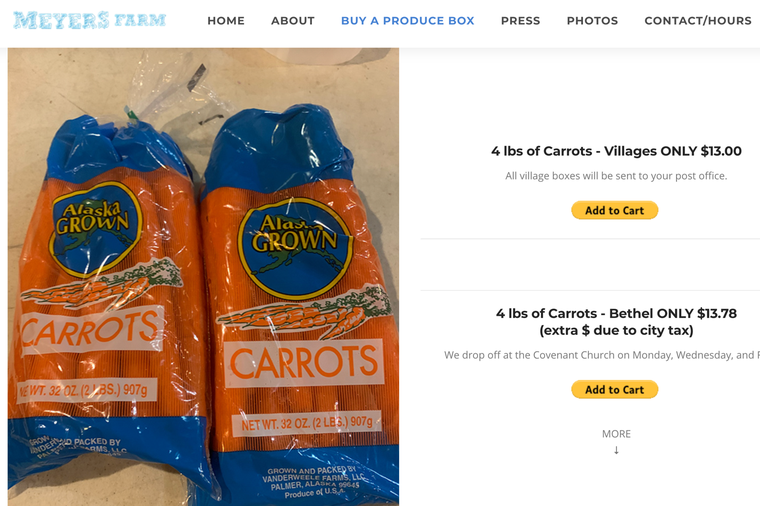 Summer vegetables can become large in Alaska due to 20 hours of sunshine. Cabbages can top 100 pounds and cantaloupes 50 pounds because photosynthesis occurs for more hours a day. Most of the record-setting vegetables that began in greenhouses before the seedlings are transplanted to soil in May. 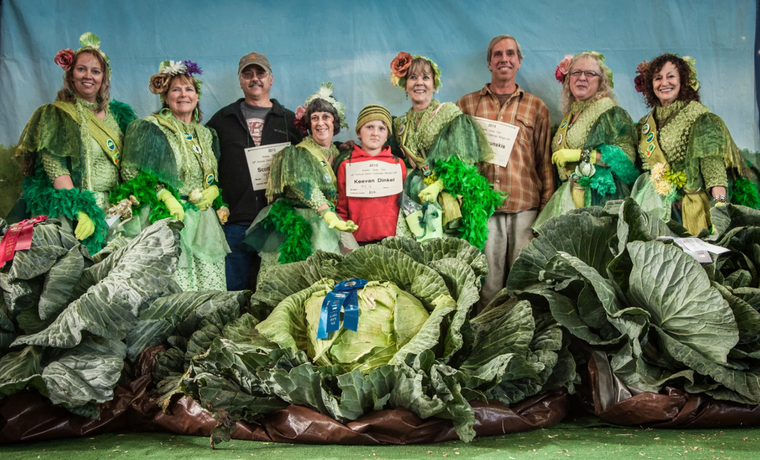 Alaska has beef and dairy cows, sheep and goats, pigs and chickens, as well as reindeer, musk oxen, and yak. The major cost of raising animals is feed, since grazing is limited to three or four months a year. Farmers in some areas must protect their animals from bears and other predators.

Over 95 percent of the $2 billion a year worth of food purchased in Alaska is imported from the lower 48 states, while Alaska sends $2 billion worth of seafood out of the state each year. The arrival in Alaska of big-box stores has reduced the cost of food from the lower 48. However, some of the seafood caught in Alaska is frozen and canned in Seattle and returned to Alaska supermarkets.

Fisheries. Alaska is the US fishery superstate, accounting for 60 percent of the US commercial seafood catch, some five to six billion pounds worth $2 billion a year. Salmon is the most valuable fish, but king crab and halibut are also important; pollock is the major fish caught by tonnage. Alaska’s state fish is the king Chinook salmon, and seafood is one of the few items cheaper in Alaska than in the lower 48 states.

Alaska’s forests (green) are concentrated in the center and southeast, ag (yellow) is northeast of Anchorage, and salmon is mostly in waters in the south and west 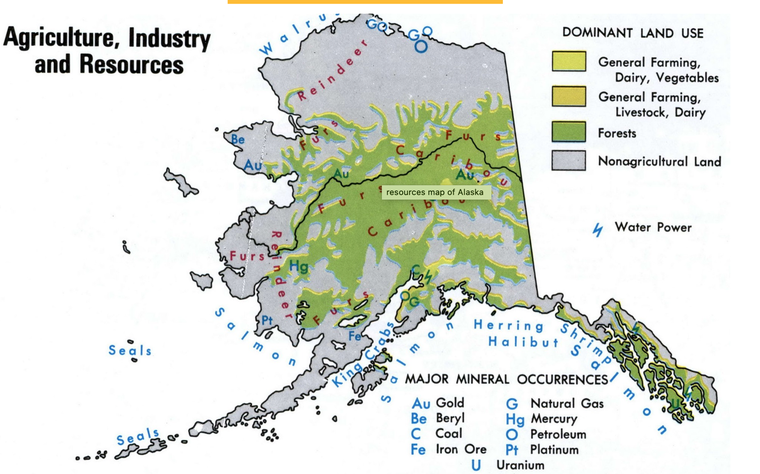 Seafood is a key source of protein for Alaska residents and a major economic activity, employing 50,000 fishing and processing workers in July or three times more than the oil and gas industry. Alaska has over 9,000 commercial fishing boats. The state estimates fish or seafood harvesting employment by working backwards from the catch that is reported by licensed operators. For example, a 60-foot Bering crab boat requires six workers, so crab landings reported by such boats are assumed to provide six jobs.

Most Alaska fishing vessels are small, but the larger boats catch most of the fish

Seafood harvesting employment peaks at over 23,000 in July

Fish are processed near where they are caught, so seafood processing often occurs in remote areas with few year-round residents. Three-fourths of the peak 23,400 seasonal seafood workers are from the lower 48 states or are foreign guest workers, including H-2A and H-2B visa holders. The state encourages seafood processors to hire Alaskan workers.

Firms that process the fish they catch can hire H-2A workers and pay them the AEWR of $12.36 in 2021. Employers of H-2A workers must pay their workers’ travel costs and provide them with free housing, but do not incur federal payroll taxes on H-2A wages and are not required to pay their H-2A workers overtime wages. H-2B workers can be required to pay some or all of their travel and housing costs, but must be paid the prevailing wage for the occupation and overtime wages. H-2B wages are subject to payroll taxes.

Alaska seafood processors, who had been hiring about 4,000 foreign youth a year under the J-1 Summer Work Travel program, were made ineligible to employ SWT youth in 2013. The US Department of State administers the J-1 program, and allows US sponsors to recruit foreign youth and place them with US employers. J-1 workers normally receive the minimum wage, and their wages are exempt from payroll taxes. 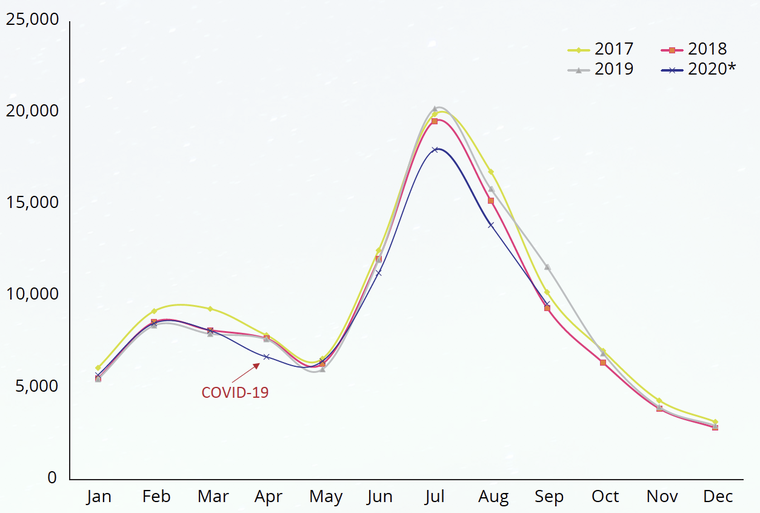 In March 2020, the governor declared fishing and seafood processing to be essential, and required seafood workers from out of state to quarantine and be tested for covid at their employer’s expense. There were several major covid outbreaks among migrant seafood processing workers, who often live in group quarters and work in cold and wet plants. Employers restricted the movement of the workers they housed, but could not control the mobility of local residents. Over 90 percent of covid cases in summer 2020 were among local residents. 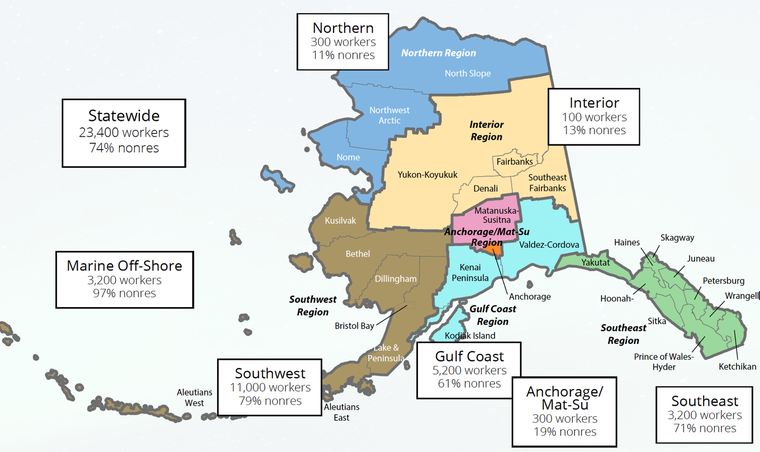 Dutch Harbor (the name of the water) and Unalaska the (name of the island and city) in the Aleutian Islands has been the leading US port for fish landings since 1996, followed by Naknek on the northeast side of Bristol Bay. Naknek has 500 year-round residents and a seafood plant that employs hundreds of migrant workers during the summer months. 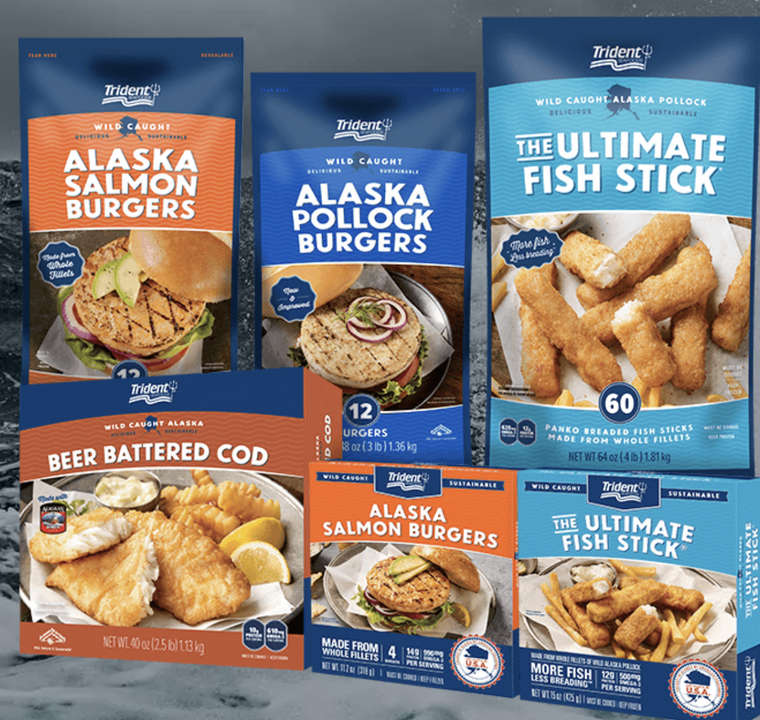 Climate. Alaska is warming twice as fast as the rest of the US, which may encourage more farming in Alaska and disrupt the state’s fisheries. USDA predicts that warmer temperatures and more precipitation will encourage the production of more crops in Alaska. However, there is little prospect of Alaska becoming self-sufficient in most farm commodities, which can be produced at much lower cost in the lower 48 states.

The effects of warming temperatures on fisheries is expected to be mixed. Flounder and halibut may benefit from warmer temperatures, while Bering Sea crab and pollock suffer. The effects on salmon are expected to be mixed, dependent on their spawning and migration routes. In 2021, there was a record catch of 65 million sockeye salmon in Bristol Bay, but very small chinook and chum salmon runs in the 2,000 mile-long Yukon River 500 miles north of Bristol Bay that led to a bar on salmon fishing in the Yukon.