Intra-generational mobility has also declined in the US, so that a rising share of workers who begin their working lives in low-wage occupations remain in such occupations. 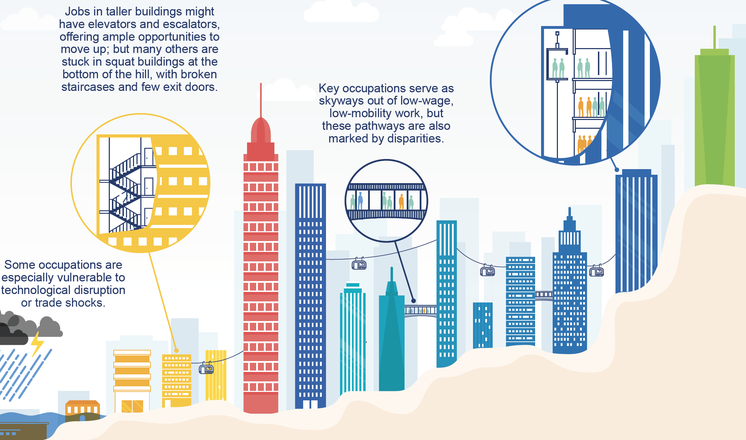 The Brookings study of occupational mobility used Current Population Survey data that tracked workers between 2003 and 2019. The analysis was based on 228,000 occupational transitions among 8.2 million workers. Half of the 228,000 CPS workers who changed occupations made an upward transition to an occupation with a higher median wage and half made a downward transition. Some 428 occupations in 130 industries were studied, including 15 “sandpits” in which workers appear to be trapped in low-wage occupations.

65% of retail sales persons who changed occupations experienced upward mobility, but only 33% of personal care aides 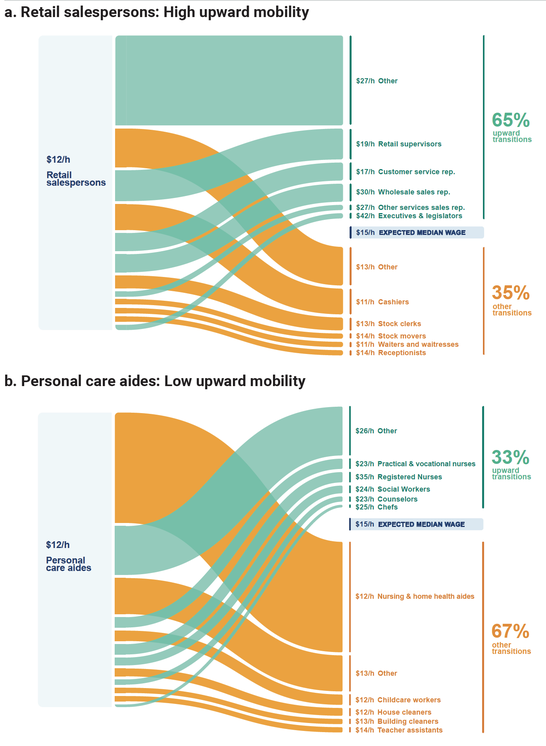 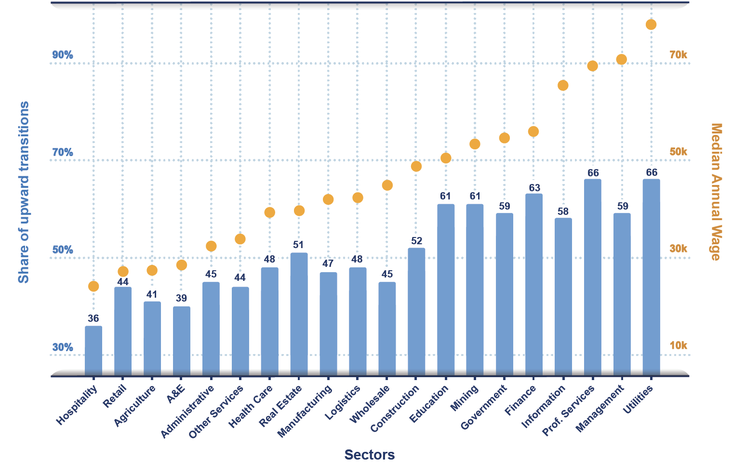 Networks. The CPS data allow analysis of how workers move between occupations, answering questions such as whether construction laborers move up to become carpenters or roofers. The size of each node or occupation reflects employment in 2019, and the distance between nodes reflects how often workers make the transition from one occupation to another. For example, construction laborers are more likely to move up to carpenters and HVAC technicians than personal care aides are to become registered nurses.

The size of occupations reflects 2019 employment, and the distance between occupations measures the share of workers who change to that occupation 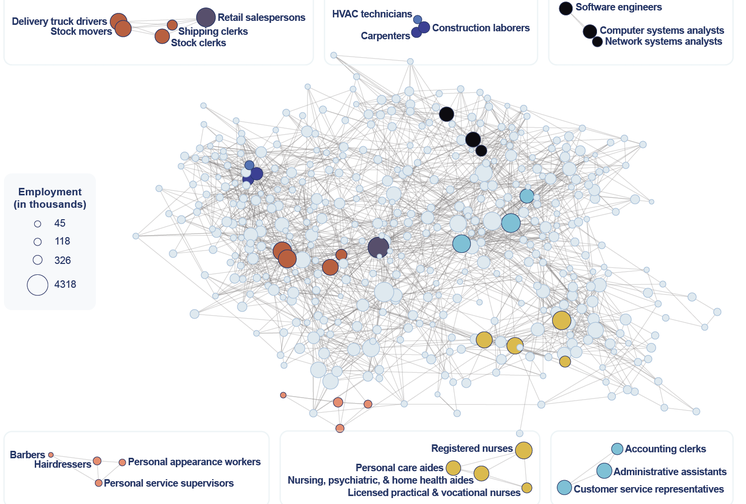 Related occupations can be grouped into 15 clusters 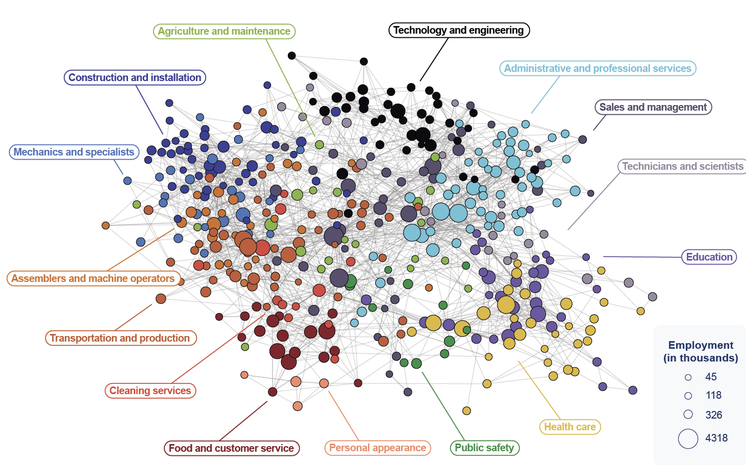 The Brookings analysis of 15 occupational clusters differs from the BLS Standard Occupational Classification (SOC) system, which groups occupations into 23 groups. Farming, fishing, and forestry occupations are in group 45, and the largest employment in the group is 45-2092, Farmworkers and Laborers, Crop, Nursery, and Greenhouse. 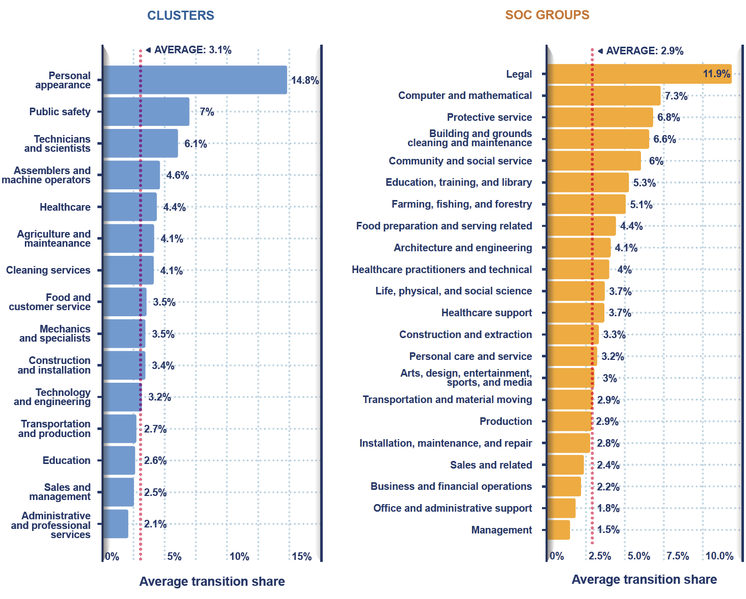 Sandpits. The key finding of the analysis is that some occupations are sticky, allowing little upward mobility. Food service is an example of the 111 occupations in the low-wage and low-mobility sandpit, where the median wage was less than $15 in 2019 and only 38 percent of food service workers who made an occupational change raised their hourly earnings, including 15 percent who raised their wages within the cluster. Young workers in the sandpit, such as youth who work in agriculture or food service, are likely to move up if they get more education, but workers over 40 in sandpit occupations find it hard to achieve upward mobility. 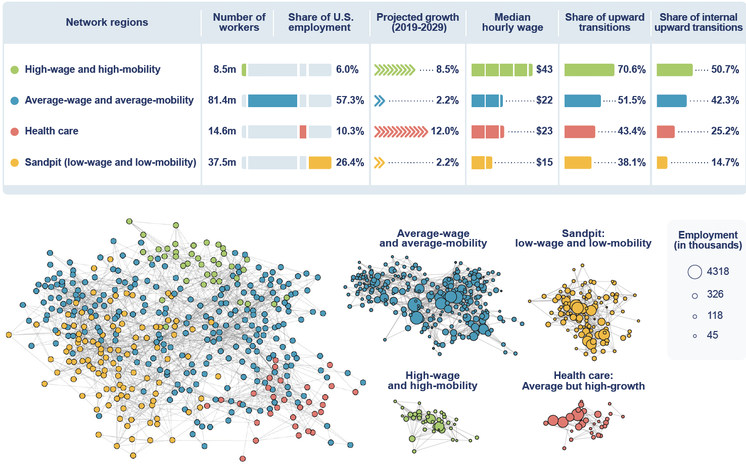 Brookings grouped agriculture with maintenance occupations, and reported that these two occupations had average employment of 3.1 million in 2019 and a median wage of $19 an hour. Half of the workers in this cluster who changed occupations moved up, and eight percent moved up within the their cluster, as when a crop worker became an equipment operator, putting agriculture in the average wage and average mobility cluster.

48% of the 1,800 agricultural workers who changed occupations between 2003 and 2009 moved to a higher-wage occupation 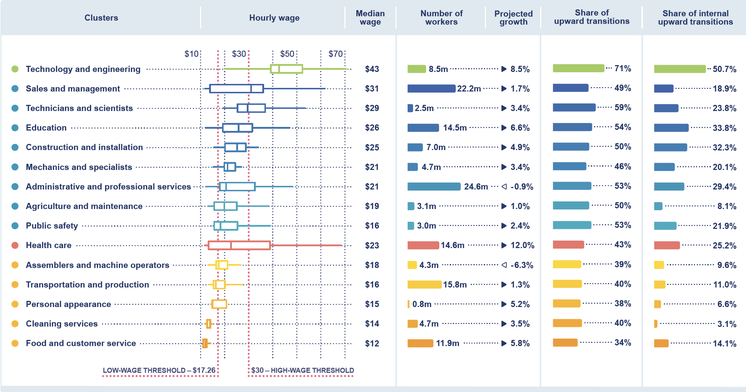 Policy. The analysts reviewed proposals to increase the mobility of low-wage workers, from raising the minimum wage to ensuring that workers are able to move their health care and pension benefits with them as they change employers. They urged wage subsidies to encourage employers to hire low-skill workers, and federal spending on infrastructure to increase employment in occupations that permit upward mobility.