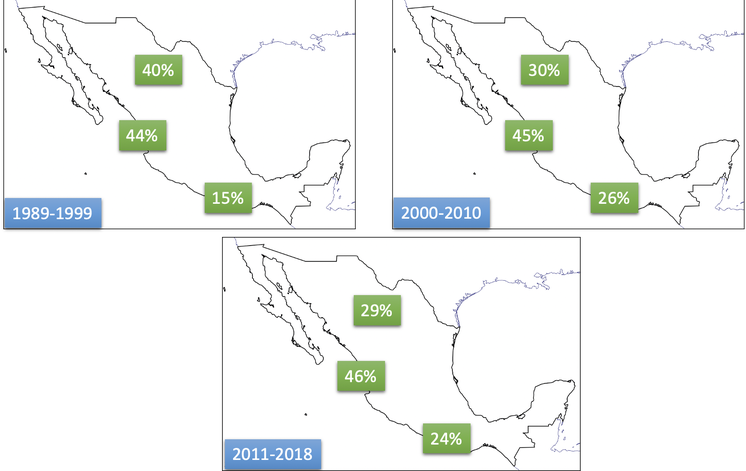 One of the most cited NAWS data points is the share of crop workers who are legally authorized to work in the US. Some 86 percent of crop workers were authorized in 1991, just after 1.1 million unauthorized foreigners were legalized under IRCA’s Special Agricultural Workers program in 1987-88. 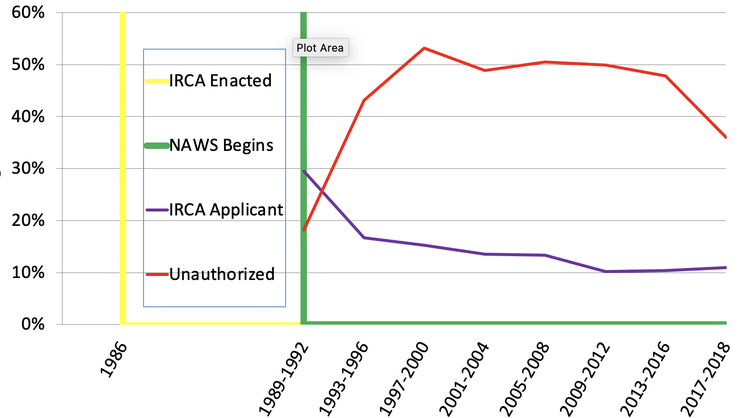 The NAWS obtains demographic and migration data from crop workers that show an aging workforce that is settled in one US place. The average age of crop workers in 2017-18 was 40, and ranged from a low of 36 for US-born crop workers to a high of 57 for SAWs who were legalized in 1987-88. The SAWS who are still in the crop workforce have an average 35 years of US farm work experience, suggesting that they began to do US farm work when they were 22. 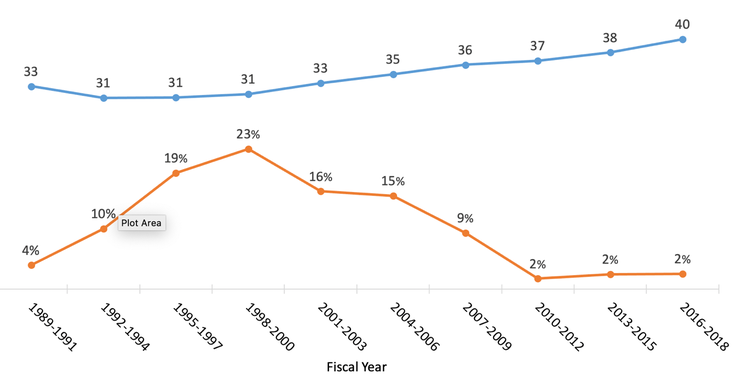 The NAWS defines migrants as workers who travel at least 75 miles from their usual homes to work on crop farms. Most farm workers are not migrants, and the migrant share of the crop workforce declined to 16 percent in 2017-18. Among the crop workers who migrate, half move at least 75 miles within the US to do farm work, while the other half arrive from Mexico or travel between Mexican homes and US jobs.

1/6 of US crop workers are migrants, and half of these migrants move at least 75 miles from a US home to a crop farm job

Poverty is more common among farm workers than all US residents. About 20 percent of farm worker families have incomes below the poverty line, compared with 14 percent of all US families.

There was more continuity than change in many demographic characteristics over the past three decades:

Employment. The NAWS portrays a settled and experienced crop workforce. Since 2000, over 80 percent of workers reported only one farm employer in the past year, while one percent reported four or more employers.

Farm work for most workers is like nonfarm work, which means that over 90 percent of workers live off the farm where they work and commute by car or car pool; less than 10 percent walk to work, suggesting that they live on the farm where they work. Workers averaged 198 days of crop work a year since 2000, when the average was 150 days a year, which likely reflected the large share of newcomers who had just entered the US and thus did not accumulate many days of farm work.

Crop workers had an average 16 years of farm work experience in 2017-18, suggesting that most began to do farm work before they were 25. Almost 90 percent of crop workers were employed directly, and over 90 percent were paid hourly wages or received salaries; seven percent received only piece rate wages. Workers were employed by their current employer an average of eight years.

Changes in employment over the past three decades reflect less Mexico-US migration:

The NAWS interviews crop workers employed on fruit (41 percent of workers interviewed in 2017-18 were employed on fruit farms), horticultural specialties such as nurseries (22 percent), and vegetables (20) percent. The most frequent task when interviewed was semi-skilled such as equipment operator, 34 percent in 2017-18, followed by harvesting, 24 percent, pre-harvest activities, 23 percent, and post-harvest, 19 percent.

40% of crop workers were employed in fruits and nuts in 2017-18, and a quarter of all crop workers had harvesting jobs

The fact that almost 90 percent of workers are hired directly, and that three-fourths are not harvesting when interviewed, may reflect year-round interviewing. The harvesting of many commodities occurs over shorter time periods, so that a smaller share of harvest than non-harvest workers may be interviewed.

H-2As. H-2A workers fill about 10 percent of the 1.1 million year-round equivalent jobs on US crop farms. The H-2A crop workforce is a decade younger, more Mexican (over 90 percent), and likely better educated than the older Mexican-born workers who currently dominate the crop workforce.

Including H-2A workers in the NAWS would add to knowledge about crop workers in several ways:

By collecting and reporting data on all major categories of crop workers, including US-born workers, legal immigrant workers, unauthorized workers, and H-2A workers, farm employers and farm worker service providers would have a fuller picture of the demographics, earnings, and desires of US farm workers.