Mexico’s economy expanded in summer 2021. However, with only a third of Mexicans fully vaccinated, the covid pandemic slowed economic and job growth. Mexico’s fresh fruit and vegetable exports to the US rose in 2020 and 2021, supporting a million year-round and seasonal jobs on Mexican farms that export most of what they produce. Another two million Mexicans are employed for wages on farms that produce for the Mexican domestic market, and a further two million Mexican-born workers are employed on US farms.

Growth. Mexico’s global economic activity index, a proxy for GDP growth, rebounded strongly from the 10 percent drop in 2020 but increased at a slower pace after growth peaked at 13 percent in June 2021.

Many Mexican jobs depend on exports of goods that are assembled in Mexico, including autos and electronics. Manufacturing exports, which account for almost 90 percent of Mexican exports, fell sharply in 2020 and rebounded in early 2021, but their growth slowed in summer 2021.

The slow pace of vaccinations and the muted rebound in exports helps to explain the slow growth in formal sector jobs to 20.4 million in August 2021, defined as workers who are enrolled by their employers in the IMSS. 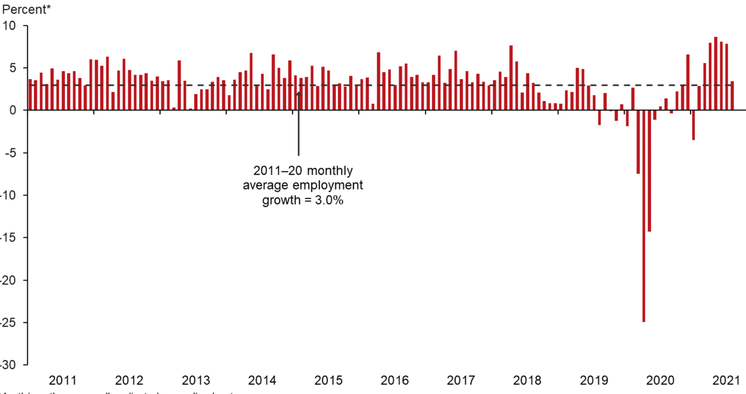 Mexico’s labor force, including the self-employed, workers with informal jobs that are not covered by the minimum wage or unemployment and health insurance, and the unemployed, reached 58 million in early 2020, dropped to 47 million in mid-2020, and was 56 million in mid-2021.

The Mexican peso stabilized at 20 pesos to $1 in summer 2021, after dropping to a low of almost 24 pesos to $1 early in 2020. The declining value of the peso makes Mexican exports more competitive but adds to inflation by raising the price of imports. 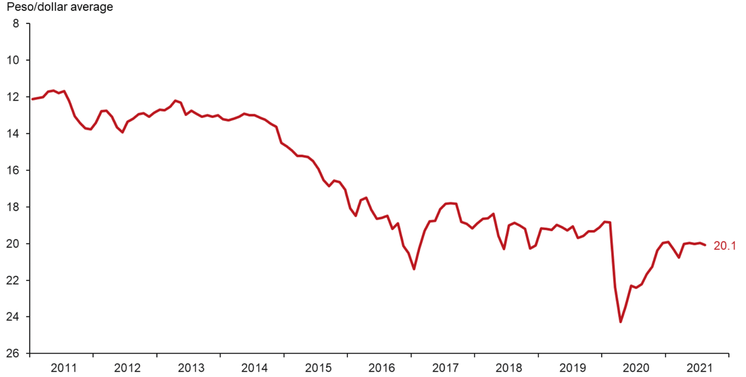 Agriculture. Mexico-US agricultural trade has increased since NAFTA went into effect January 1, 1994. The US ships mostly grain and meat to Mexico, and imports more valuable fresh fruits and vegetables, giving Mexico an agricultural trade surplus since 2014. 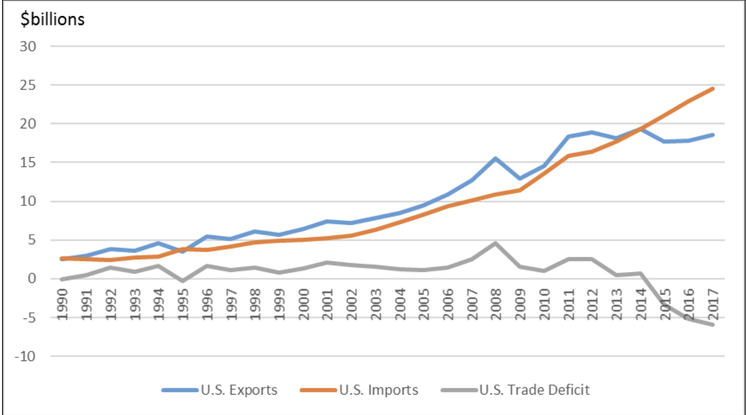 Mexico’s agricultural trade surplus with the US has been widening for several reasons. First is US consumer demand for fresh fruits and vegetables year round. Mexico’s major competitive advantage is climate, so that Mexico can produce and export commodities between December and May when there is little US production.

Over half of fast-growing by volume (x-axis) US fresh berry imports are from Mexico (y-axis), as are most fresh vegetable imports (2017-19)

Second, Mexico has latecomer advantages in producing many fruits and vegetables under protected culture structures, often plastic-covered hoops rather than glass greenhouses, that protect plants from pests and disease, raise yields, and facilitate organic production. Farm work becomes more akin to factory work on export farms as employees enter and exit structures though designated portals and both plants and people are monitored constantly, making it easy to track shipments to where they were grown and who handled them.

Many Mexican fruits and vegetables are produced under plastic hoop structures 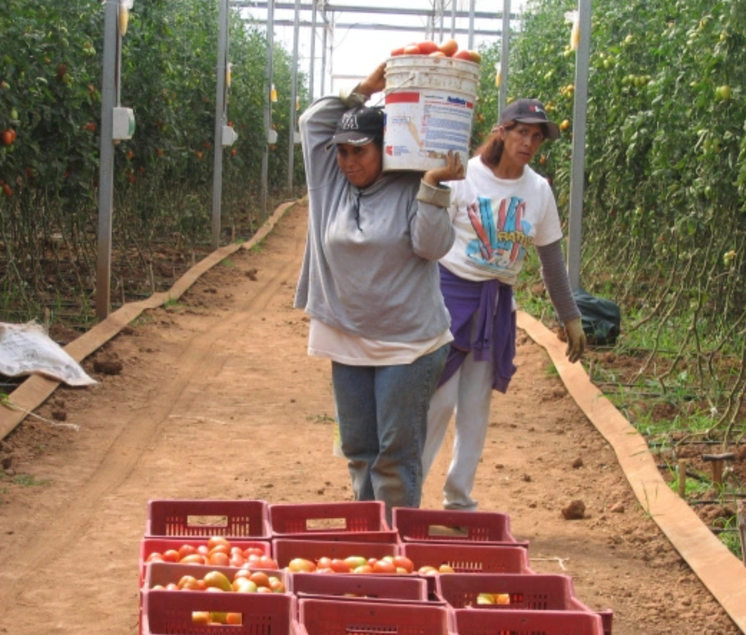 Third, wages in Mexican export agriculture are two or three times Mexico’s minimum wage, but only an eighth of US farm worker wages of $12 to $15 an hour. Labor costs are often 30 to 50 percent of production costs for fresh fruits and vegetables and, even if inputs from plants and seeds to packaging must be imported, Mexican produce can be delivered by truck at competitive prices to US buyers. 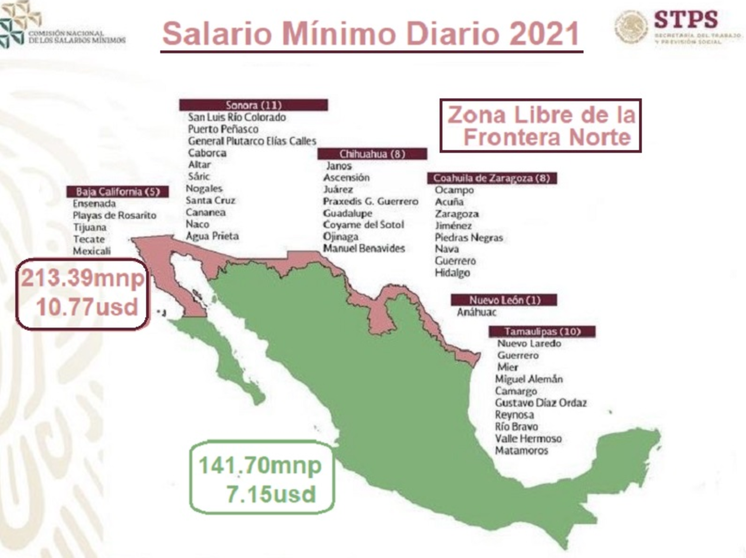 The threats to Mexican agricultural exports are inside and outside the country. Within Mexico, some government leaders see export agriculture as a cash cow to be taxed directly or indirectly. The AMLO government raised the minimum wages and used enforcement to increase compliance with the requirement that employers enroll all of their employees in the social security system IMSS and pay taxes of 25 to 30 percent on top of their wage bills to IMSS.

IMSS, in turn, is supposed to provide health and child care and pensions to workers and their families, but often fails to serve especially migrant and seasonal farm workers. The gap between more employers paying IMSS taxes, and the failure of IMSS. to provide benefits to workers and their families, threatens the significant progress that has been made since 2015 to formalize employment in export agriculture.

Some NGOs decry the export of scarce Mexican water in the form of fresh produce, arguing that export agriculture resembles non-sustainable mining by drawing migrants from poorer southern states to northern Mexico and will leave them stranded after the water supply is depleted and the environment is despoiled. Such fears have not materialized in major export areas such as Sinaloa, which has been exporting tomatoes and other vegetables for decades.

There are also threats to Mexico’s export agriculture from the US. Protected culture is enabling Mexican farmers to export more months each year, which reduces the high prices that US growers expect to receive for early- and late-season production. Most US farmers, with the notable exception of those in Florida and other southeastern states, have been advocates of free trade, but more US growers may become protectionist if the prices of US fruits and vegetables are depressed by Mexican imports.

The US International Trade Commission (USITC) in a July 2021 report concluded that Mexican raspberry producers were not subsidized by the Mexican government, echoing an earlier finding that there were no government subsidies for Mexican blueberry growers. The US imported 106,500 tons of fresh raspberries from Mexico in 2020, and the USITC cited higher yields and lower labor costs abroad as reasons for expanding raspberry imports.

Mexico exported 2.1 million tons of avocados worth $3.1 billion in 2020. Almost half of Mexico’s avocado exports go to the US, which has allowed imports of fresh Mexican avocados since 1997. Avocados displaced tomatoes as Mexico’s most valuable farm export in 2016. Most of Mexico’s “green gold” is from Michoacán, a Mexican state that is also home to several drug cartels, some of which “tax” avocado farmers or compete with them by planting avocado trees on communal lands whose ownership is in dispute, hastening deforestation.

Most of Mexico’s avocados are produced in Michoacán 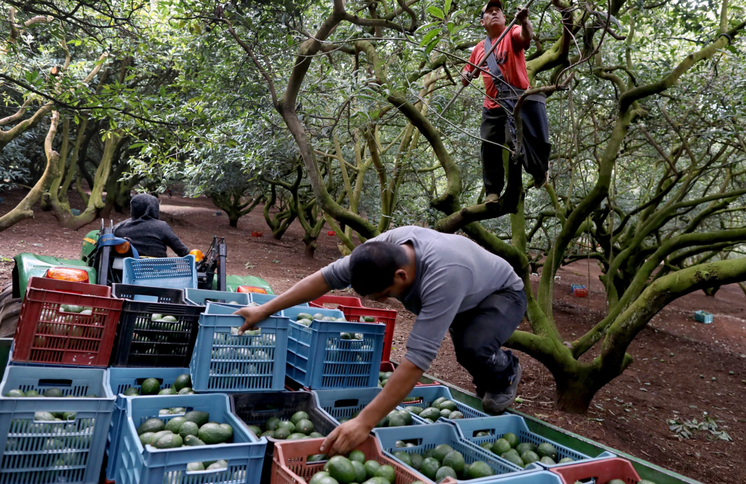 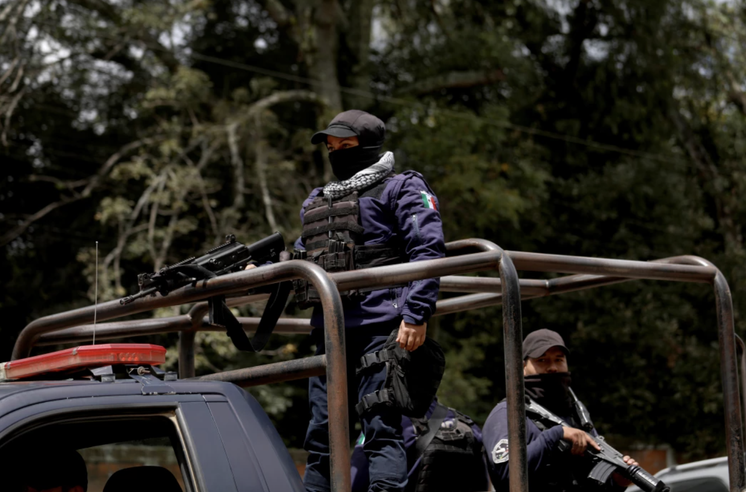