DOL’s Bureau of Labor Statistics projects the size of the labor force and employment every two years. BLS in October 2021 released projections for the 2020-30 decade that emphasize that the aging and slower growing US population and labor force means that employment in the health care and social assistance industry will increase at the fastest rate. 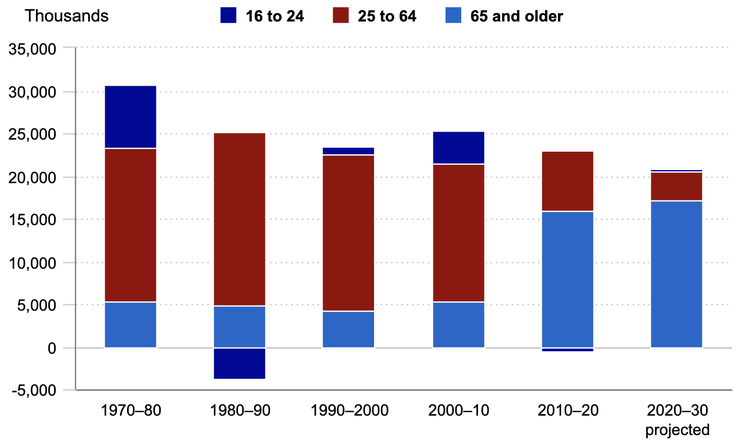 Covid reduced employment and labor force participation in 2020, which makes some of the growth rates for particular industries and occupations between 2020 and 2030 higher than they otherwise would be, as with motion picture projectionists because most theaters were closed in 2020. Covid accelerated several trends that were already underway, such as faster employment growth in IT and shrinking employment in retail stores. 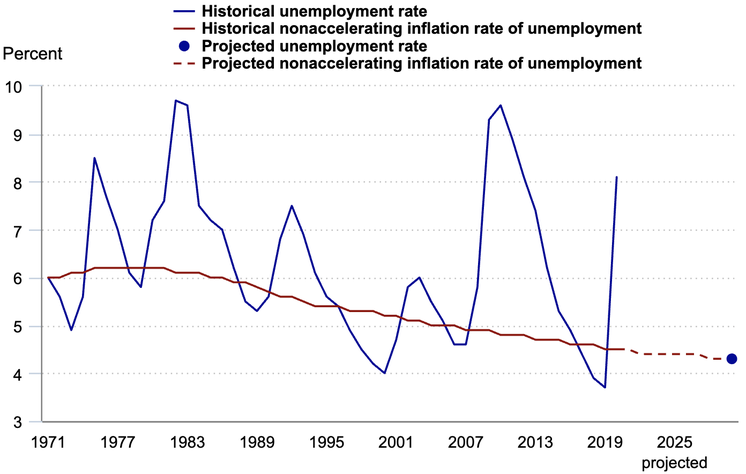 Labor Force. The labor force participation rate (LFPR) is the share of US residents 16 and older who are employed or seeking jobs. The LFPR, which has been declining as youth stay in school longer and the share of older and retired residents increases, fell sharply to 62 percent in 2020, and is down from a peak 67 percent in 2000.

The world’s highest LFPRs are in Gulf oil exporters where most private sector workers are migrants and in developing countries that assume all rural residents are employed in agriculture. Both Madagascar and Qatar have LFPRs over 87 percent. Among industrial countries, Scandinavian countries such as Sweden have LFPRs of 64-65 percent.

The major changes in US labor force participation over the past half century include the declining LFPR of 25-54 year-old men to 88 percent in 2020 and the rising LFPR of 25-54 year old women to 75 percent. BLS expects the LFPR for prime-aged men to decline another percent by 2030 to 87 percent, and for prime-aged women to remain stable at 75 percent. 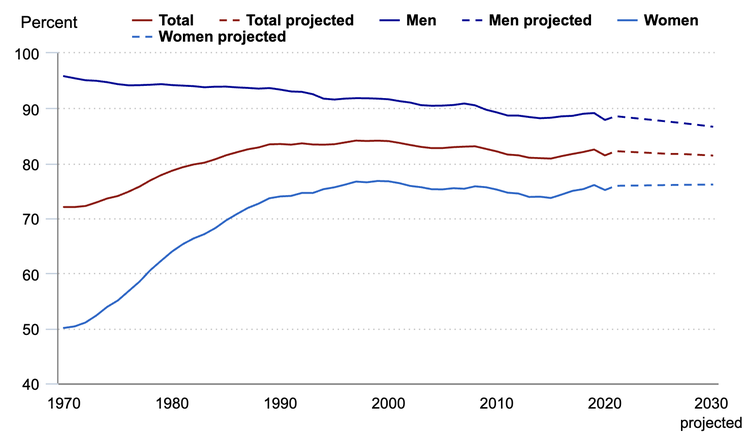 Labor force growth (red) was faster than population growth (blue) before 2000, and slower since 2000 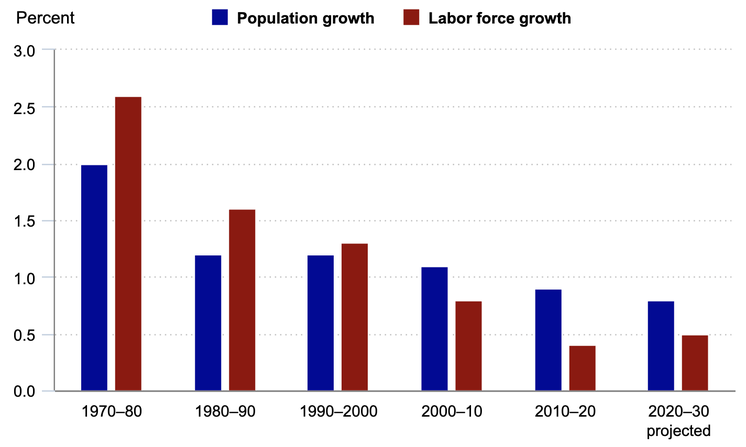 Industry. Employment rose by 12 million between 2010 and 2020, and is projected to increase by 12 million between 2020 and 2030. In 2030, there are expected to be 2.3 million workers employed in agriculture, 20.6 million employed in goods-producing industries, and 134.1 million employed in services. Health care and social assistance, with employment of 23.1 million in 2030, and professional and business services, with employment of 22.3 million, are each expected to have more employment than all goods-producing industries, which include manufacturing, 12.3 million, construction, 7.6 million, and mining, 0.7 million.

Employment in agriculture is expected to increase slightly, as the growing number of wage and salary workers offsets the decline in self-employed farm operators and their unpaid family members. Hired farm workers were two-thirds of average employment in US agriculture in 2020, and are projected to account for 69 percent of farm employment in 2030. 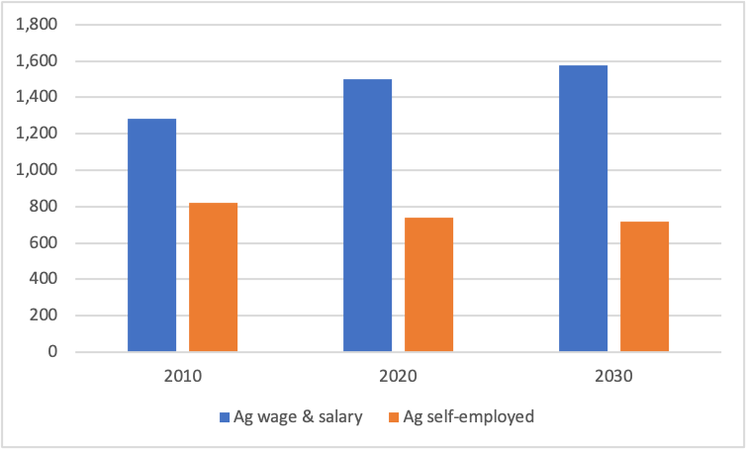 Occupation. Health-care occupations are expected to have the fastest growth between 2020 and 2030, reflecting the needs of an aging population, followed by personal-care related occupations and food preparation and serving occupations. Occupational employment growth between 2020 and 2030 reflects long-run trends, as with the growth of employment in computer-related occupations, and recovery from the pandemic, such as the projected 70 percent growth in motion picture projectionists from a very low base in 2020 due to covid-related closures of movie theaters.

There are expected to be 1.1 million more home health and personal care aides by 2030