The number of farm jobs certified by DOL to be filled with H-2A workers tripled between FY10 and FY19, from 79,000 to 258,000. The FLC share of job certifications also tripled from 15 percent to 42 percent. H-2A jobs are concentrated in fruits and vegetables, each accounts for a third of H-2A job certifications. 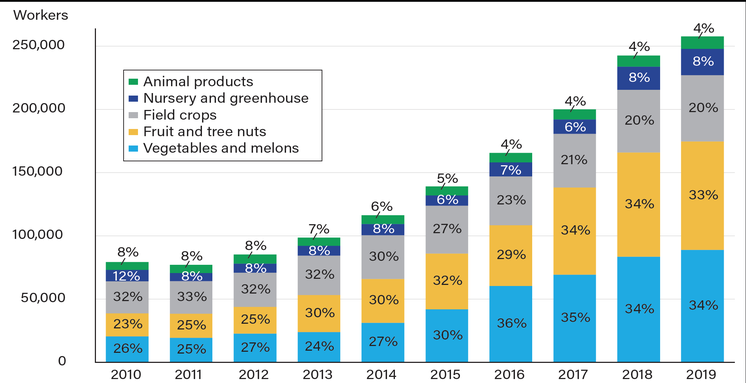 Analysis of the job offers submitted by employers to the Office of Foreign Labor Certification (OFLC) identified the major crops or commodities employing H-2A workers, the type of employer, and the state where the job was located. H-2A workers are concentrated in fruits and vegetables, employed by farm operators and farm labor contractors, and mostly in southeastern states such as Florida, Georgia, and North Carolina.

H-2A workers are concentrated in the southeastern states 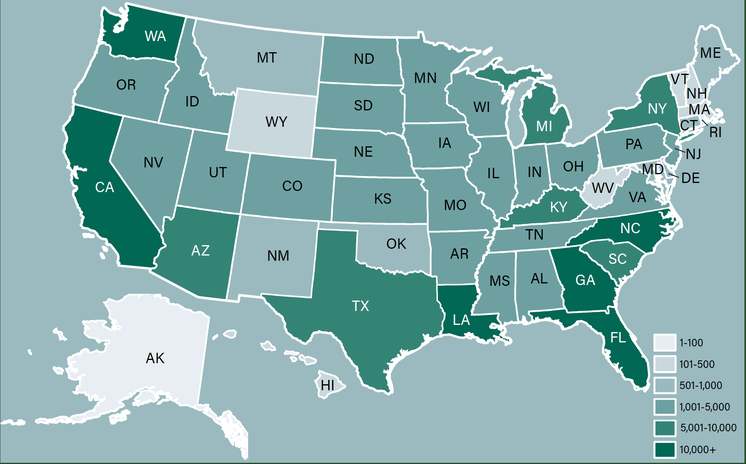 Commodities. The number of jobs certified to be filled in fruits and nuts rose more than four-fold, from 18,000 to almost 86,000 between FY10 and FY19. The share of fruit jobs certified to FLCs tripled from 16 percent to 45 percent.

Fruit jobs certified quadrupled between FY10 and FY19; the FLC share of fruit jobs tripled to 45% 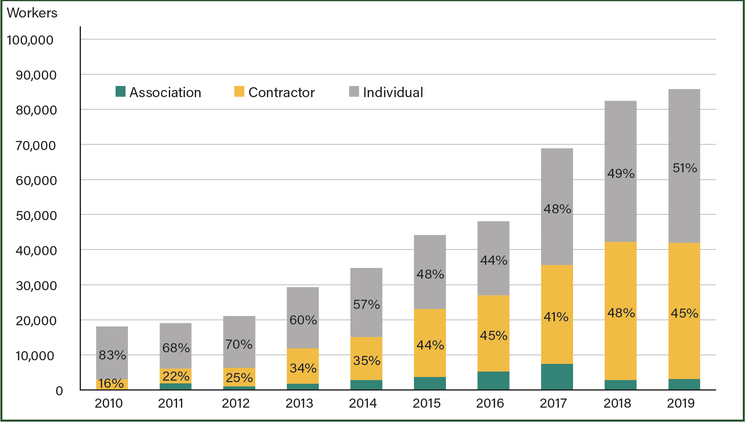 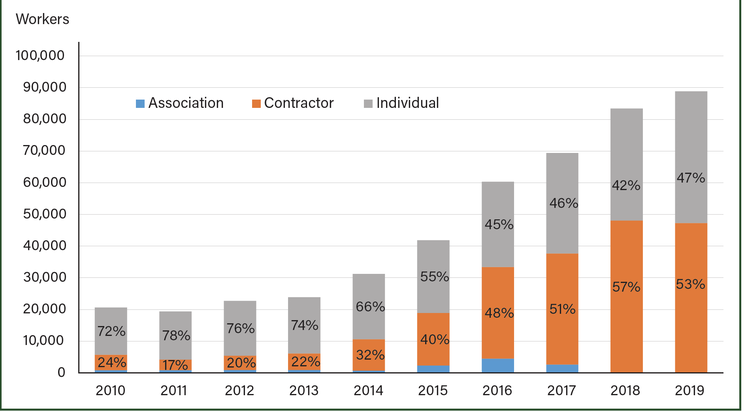 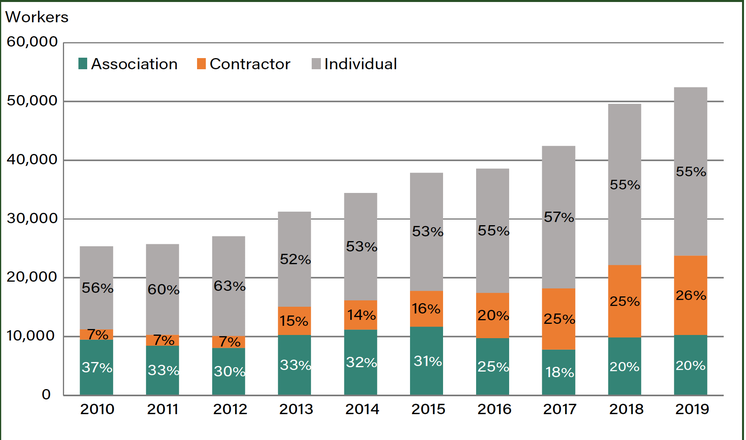 The number of H-2A jobs certified in the livestock sector rose by two-thirds between FY10 and FY19, from 6,000 to almost 10,000, with 85 percent of H-2A workers employed directly by employers. Open range livestock accounted for 47 percent of livestock H-2A jobs, often sheepherders tending flocks that graze on public land in the mountain and western states, followed by beekeeping with 20 percent of jobs and crawfish farming (mostly Louisiana) with 16 percent.

Size and Duration. Farm employers requested certification for an average 20 jobs in FY19, with a range from an average four jobs in livestock to an average 45 jobs in fruits and vegetables. 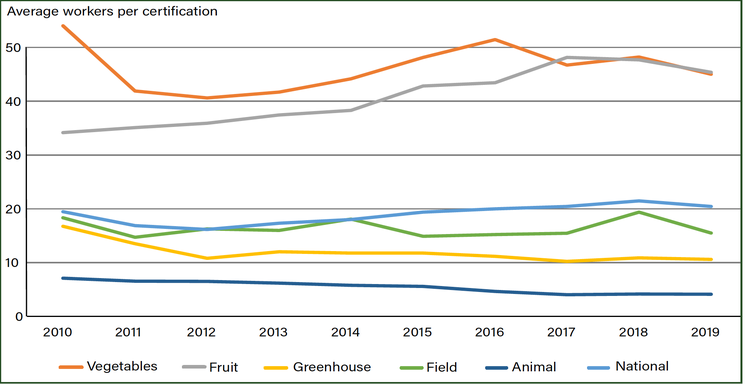 The average length of H-2A contracts decreased over the past decade, from almost seven months to five months, with the largest drops in greenhouse and nursery and livestock. There are several reasons, including DOL more strictly enforcing the 10-month maximum duration of jobs, employers improving their ability to determine their period of need, and reports of more H-2A workers filling two jobs while in the US, which appears in DOL data as two shorter contracts rather than one longer contract. Average contracts in the greenhouse and nursery and livestock sectors remained the longest in FY19 at six and eight months. 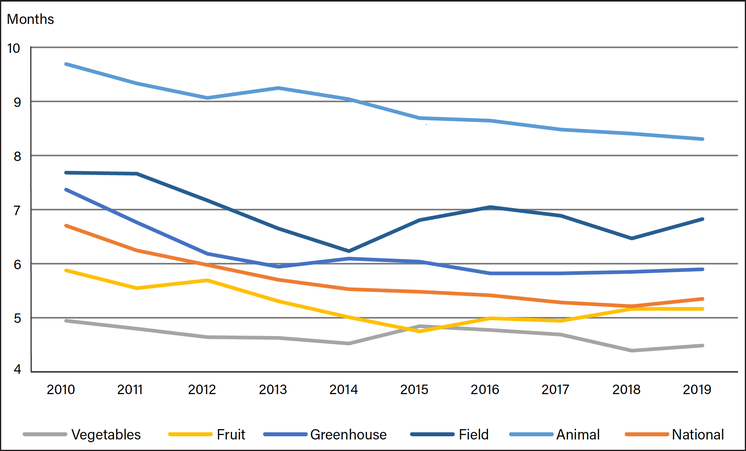 Employers. Field crops account for over 60 percent of the employers who request certification to employ H-2A workers, reflecting the fact that many tobacco farms employ only a few workers. Livestock employers account for another 15 percent, so that three-fourths of H-2A employers are in field crops and livestock, even though these sectors account for only a quarter of H-2A jobs certified.

Field crop and livestock employers accounted for ¾ of the 10,000 H-2A employers and ¼ of H-2A jobs

By contrast, most of the FLCs that requested certification to employ H-2A workers were in fruits, 39 percent, vegetables, 27 percent, and field crops, 23 percent.

90% of FLCs were in fruit, vegetables, and field crops 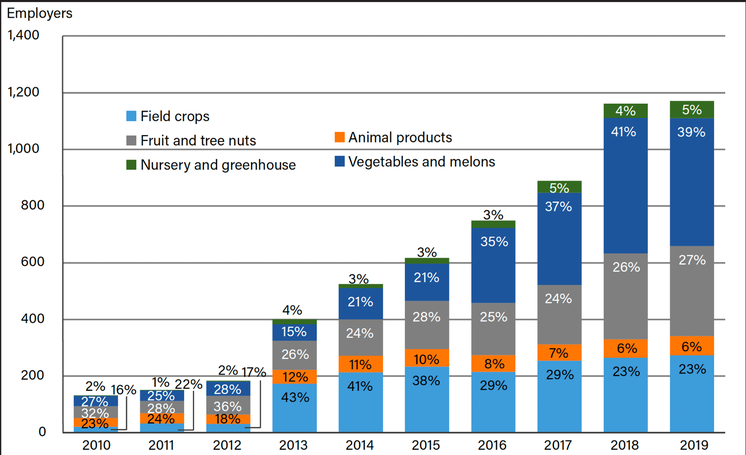 Wages. Employers must offer and pay the higher of several wages to H-2A workers and US workers in corresponding employment, including the federal or state minimum wage, the prevailing wage, or the AEWR, which is derived from the average hourly earnings of field and livestock workers who are hired directly by farm employers.

AEWRs vary by state and commodity. The spread between the highest and lowest AEWR between states was about $2.25 per hour in 2010 ($2.69 in 2019 dollars), and widened to $3.75 an hour by 2019, as AEWRs in the Pacific region of CA, OR, and WA surpassed AEWRs in the midwest. AEWRs have been lowest in the southeastern states including Florida.

AEWRs are highest in the Pacific and lowest in the Southeast 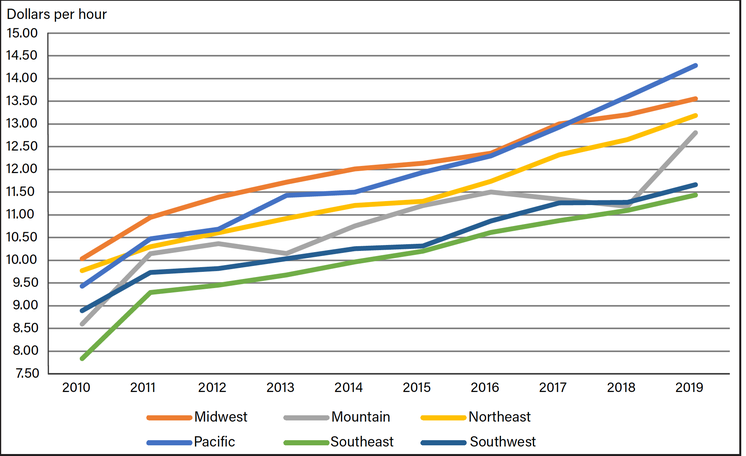 Research Agenda. The H-2A program is expanding rapidly. DOL is likely to certify over 300,000 jobs to be filled with H-2A workers in FY21, so that almost 15 percent of the year-round equivalent jobs in US crop agriculture are filled by H-2A workers, The share of H-2A workers is higher in particular commodities and states, so that half or more of US apples and oranges are picked by H-2A workers.

H-2A expansion raises several questions. First, are there economies of scale in recruiting, housing and employing H-2A workers? There is no clear trend in the number of jobs per certification, which is higher in fruits and vegetables than in livestock and greenhouses. Shorter average contracts may reflect both H-2A employers planning their need for H-2A workers more precisely and more H-2A workers holding two or more jobs and thus having two or more contracts while they are in the US.

Associations and FLCs may develop business models that move workers from one contract to another so that they can remain in the US the maximum 10 months usually permitted.

Do H-2A employers make labor management changes, such as utilizing H-2A supervisors to manage H-2A workers, so that H-2A crews arrive in the US as a team? What skills do H-2A workers acquire while they are employed in the US, and how do they use these skills in their countries of origin?

Third, what are average employer costs for recruitment, transportation, and housing for H-2A workers, and what are employer savings from the exemption of H-2A wages from social security and other taxes? H-2A workers provide labor insurance. How much do employers value the fact that H-2A workers cannot change US employers?

The National Agricultural Workers Survey (NAWS) interviews about 2,000 non-H-2A workers employed on US crop farms each year. If the NAWS were to include H-2A workers, employers may be able to determine which workers are most productive and successful as the program expands beyond Mexico, Jamaica, and Guatemala. MSFW service providers and NGOs are interested in H-2A worker characteristics and needs, including how H-2A workers can use skills acquired in the US to promote development in their areas of origin.