The retail value of fresh berries sold in the US was $8 billion in 2021, accounting for 20 percent of supermarket produce sales. Strawberries (47 percent) represented almost half of the value of retail berry sales, followed by blueberries, 25 percent, raspberries, 15 percent, and blackberries, 10 percent. 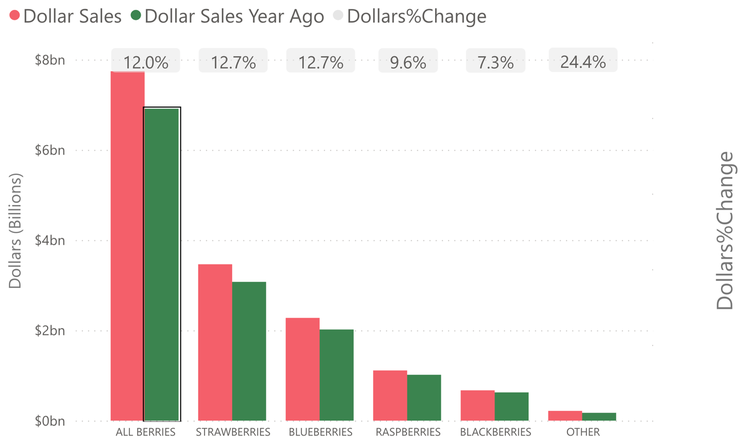 Major reasons for increased fresh berry sales include the taste and flavor of berries, convenient packaging that allows them to be consumed as snacks or at meals, and their health benefits.

Santa Maria has more strawberry acreage than Oxnard and Salinas/Watsonville

US strawberry production peaks in May-June

Strawberries are sold in flats that have eight one-pound clamshells or 12 pints. Grower prices for conventional strawberries in 2020 ranged from $6 to $17 a flat, with the lowest prices in May-June when production peaks and the highest prices in November-December when production is lowest. Grower prices for organic strawberries are about 50 percent higher than for conventional strawberries. The organic premium varies over the year, reaching up to 80 percent during November-December when there is little production.

Labor. Strawberries are the most labor-intensive crop grown in California, involving about 1.5 workers per acre and 50,000 to 60,000 workers to harvest strawberry fields twice a week during the peak season. Labor is the major cost of growing strawberries, representing 50 to 60 percent of variable production costs.

A strawberry field may be picked 40 to 50 times during the harvest season. Workers push a light wheelbarrow containing the plastic clamshells in which strawberries are sold between two adjacent elevated rows, picking from both rows. Full trays are taken to a checker at the end of the row to receive credit for the tray. Strawberries must be at least two-thirds red to be picked and packed; non-salable berries are discarded in a bucket attached to the picking cart or on the ground. Some workers literally run with full trays to the checker and back to their carts to maximize their piece rate earnings.

Strawberry harvesters wheel a cart with clamshells between elevated rows 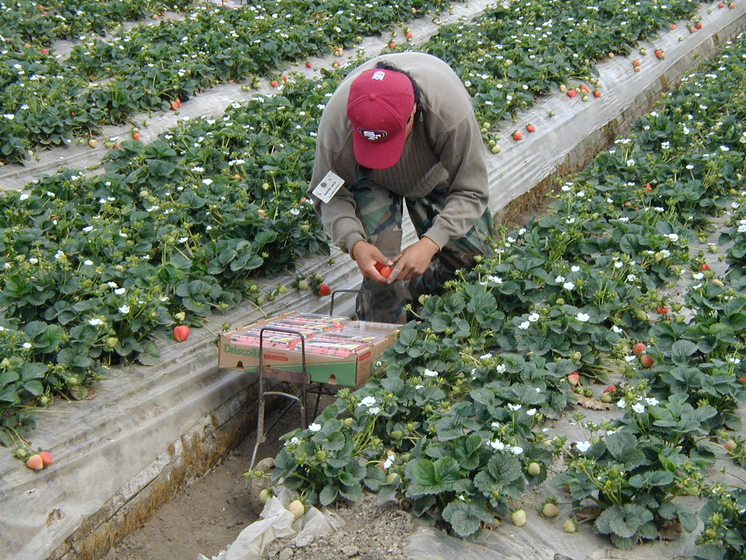 Most workers are paid piece rate wages of $1.75 to $2.25 per flat of 12-12 once pints or eight one-pound clamshells, and guaranteed at least the California minimum wage ($14 an hour in 2021). Some growers offer workers an hourly wage of $5 an hour and a piece rate of $1.25 to $1.50 for each flat, while others guarantee the minimum wage and offer $0.50 to $0.75 per tray after eight trays an hour. Workers typically pick eight to 12 flats an hour, enabling most to achieve piece rate earnings that exceed the minimum wage by at least $2 an hour.

Worker productivity and earnings vary with individual skill, the size and yield of the berries, and time of day, with workers often picking slower at the end of the day. Some growers place slow-moving conveyor belts in front of harvesters, allowing them to place full flats of berries on the belt rather than carry them to the end of the row, which gives workers more time to pick and raises their productivity. Piece rates are lower in fields with conveyor belts because workers can pick faster. 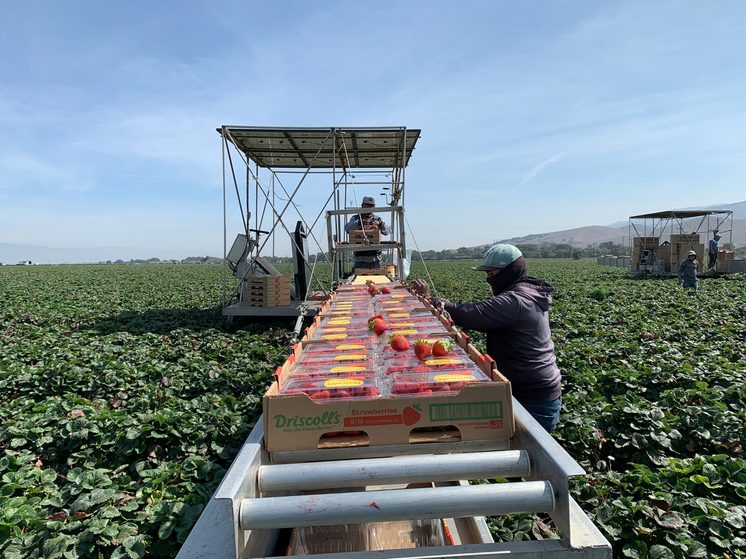 Many of the workers who harvest strawberries are non- or limited-Spanish speakers from southern Mexican states such as Oaxaca and Chiapas. There are often several members of a family and their relatives in a crew, so that strawberry crews are more diverse than the solo male work crews that dominate the harvest of tree fruits. This means that there is more variance in productivity among strawberry harvesters than in other crops that pay harvest workers piece rate wages, such as crews that pick apples or oranges.

Most strawberry harvesters are hired directly by farmers rather than brought to farms by contractors. Some farmers keep older and slower workers on their payrolls in order to retain their younger and faster relatives. 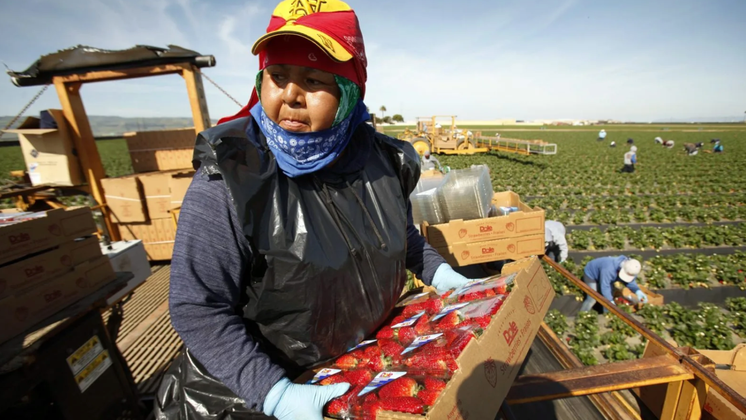 The strawberry labor market is “fluid,” with workers often changing employers. Some workers monitor yields to determine where they are most likely to maximize their piece-rate earnings, and change employers to pick in the fields with the most berries to harvest. In the past, some growers refused to rehire workers who quit during the season and went elsewhere. However, the slowdown in unauthorized Mexico-US migration after the 2008-09 recession has ended most no-rehire-during-the-season policies.

Strawberry harvesting crews typically include 30 to 60 workers. The key figure is the crew supervisor, who ensures that crews have 80 to 90 percent of their expected workers and helps to monitor the quantity and quality of berries that are picked.

H-2A. Many growers use the H-2A program to obtain berry workers. Berries were the most common type of job filled by H-2A workers in FY19, accounting for 10 percent of the 258,000 US jobs certified to be filled with guest workers, the last year for which DOL reported H-2A jobs by commodity.

The number of jobs certified to be filled by H-2A workers tripled between FY13 and FY21, from less than 100,000 to almost 318,000. H-2A workers harvest half or more US apples and oranges, and are harvesting an ever higher share of fresh berries. 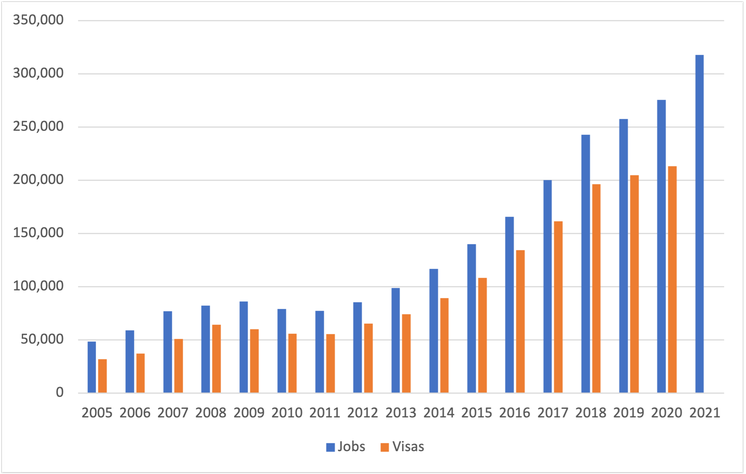 Alternatives to Hand Labor in Strawberries. 2020.