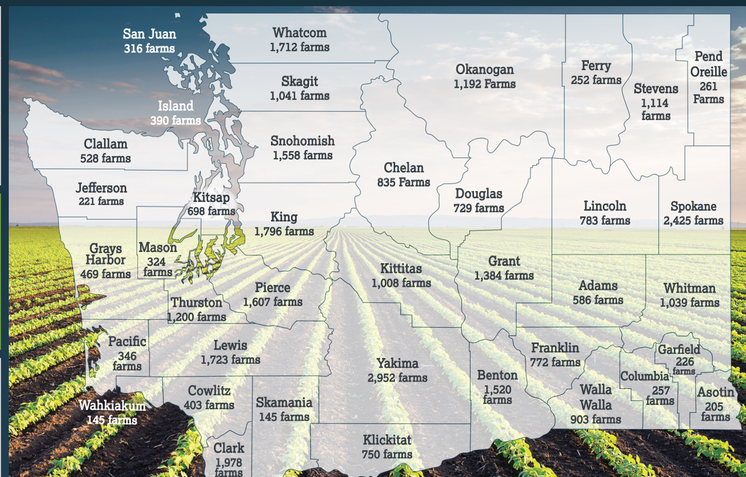 US agriculture is a 50-50 sector; about half of US farm sales are from crops and half are from animal products. Washington is a crop state: the $7 billion worth of crops were 73 percent of farm sales in 2017. Apples worth $2.4 billion in 2017 were the most valuable crop, followed by cherries, $465 million, grapes, $308 million, and pears, $250 million. Blueberries were worth $115 million, red raspberries $57 million, and strawberries $12 million. Milk sales were $1.2 billion in 2017 and cattle cash receipts were $765 million.

Apples account for a quarter of WA’s farm sales 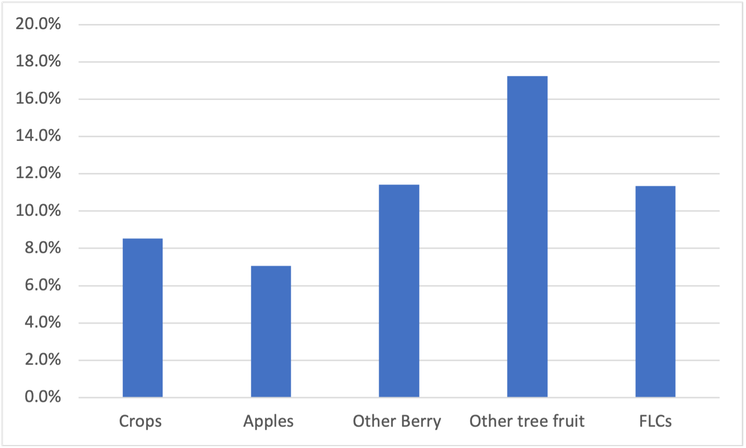 Each of the major tree fruits generates gross revenues of $10,000 to $15,000 an acre, but there is significant variation from year to year in yields and grower prices. In recent years, apples have generated the most stable revenues of about $12,000 an acre, cherries fluctuate between $10,000 and $14,000 an acre, and pear revenue has fallen to less than $10,000 an acre.

Sweet cherry acreage is rising amidst fluctuating yields and prices, making the gross revenue per acre variable. Washington had 40,000 bearing acres of cherries in 2020 that yielded an average five tons an acre worth $2,810 a ton, generating gross revenues of $14,000 per acre.

NASS-reported yields vary from year to year, and ranged from five to eight tons an acre over the past decade, while WSU cost studies assume higher yields, an average 20,000 pounds or 10 tons an acre. Prices in recent years were $1,700 to $2,800 a ton, and variable yields and prices explain why gross revenue per acre ranged from less than $10,000 to over $15,000.

Washington also has important berry and grape sectors. The acreage of blueberries more than doubled over the past decade to 18,200 in 2020, while raspberries shrank to 9,000 acres. Blueberry yields and prices fluctuate, but yields in 2020 averaged 9,200 pounds per acre and growers received $1.30 a pound for gross revenue of $12,000 an acre. Raspberry yields of 9,200 pounds per acre in 2020 and grower prices of $0.91 a pound generated gross revenue of $7,000 an acre.

Some 57,000 of the 76,000 acres of grapes are wine grapes, where yields averaged 3.1 tons an acre in 2020 and grower prices averaged $1,500 a ton, generating gross revenues of $4,700 an acre. Wine grape acreage increased almost 50 percent over the past decade, yields fluctuated, and grower prices rose.

Employment. Washington requires almost all farm employers to register with unemployment insurance authorities and report employment for the payroll period that includes the 12th of the month and wages paid to all hired workers who were employed during the month. Since 2001, average employment in WA agriculture (NAICS 11) rose by a quarter, from 75,000 to 100,000. The peak month of employment was July 2020, when the 126,000 employees were 1.6 times the 78,000 in January 2020. 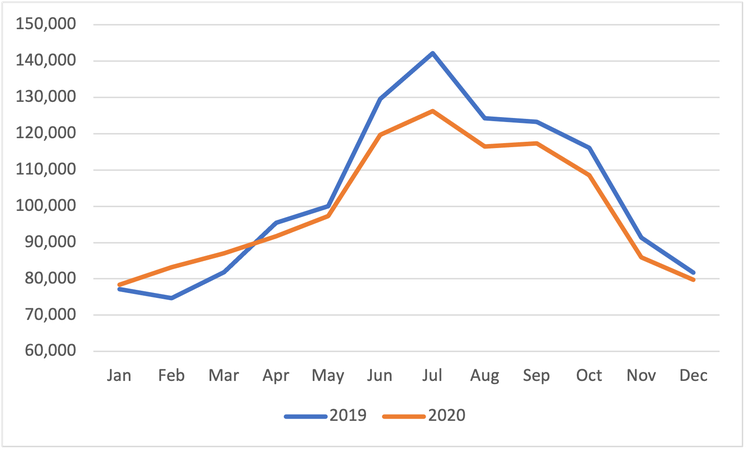 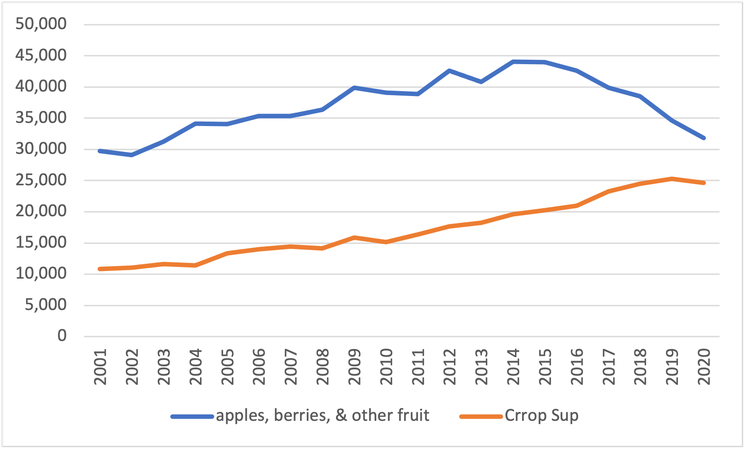 Within direct-hire crop employment, apples, other berries (non strawberries), and other tree fruits (cherries, pears) account for a declining share of average employment; these three sectors fell from two-thirds of crop employment in 2010 to just over half in 2020.

One reason may be that more workers are being brought to farms by FLCs. Average FLC employment rose from less than 1,000 in the early 2000s to over 5,000 in recent years, mirroring declining direct-hire crop employment. Some of the increase in FLC employment may reflect large tree fruit growers establishing FLCs to pick their own fruit and the fruit of other growers.

Average direct-hire employment in apples and other tree fruit fell by 7,000 over the past decade, while FLC employment rose by 3,000 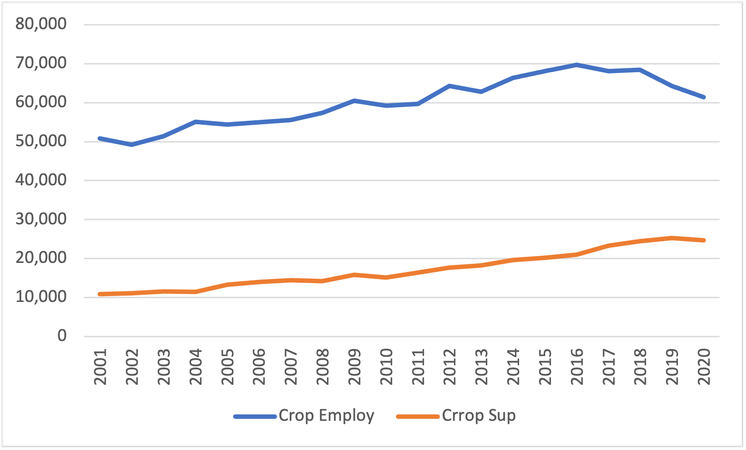 The number of apple employers fell by two thirds since 2000, while the number of FLCs quadrupled 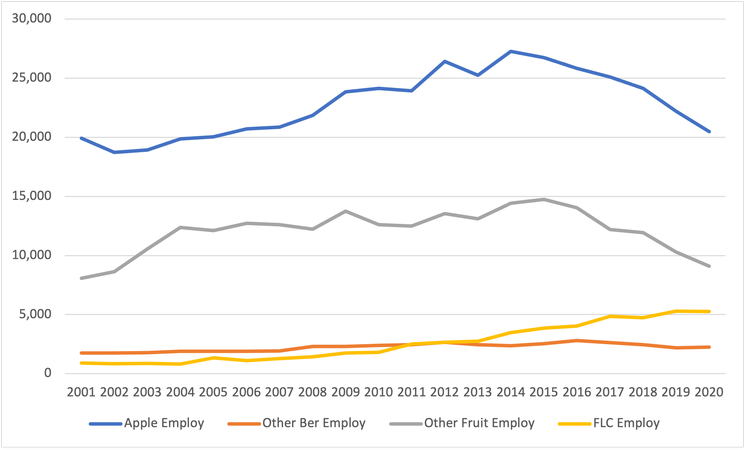 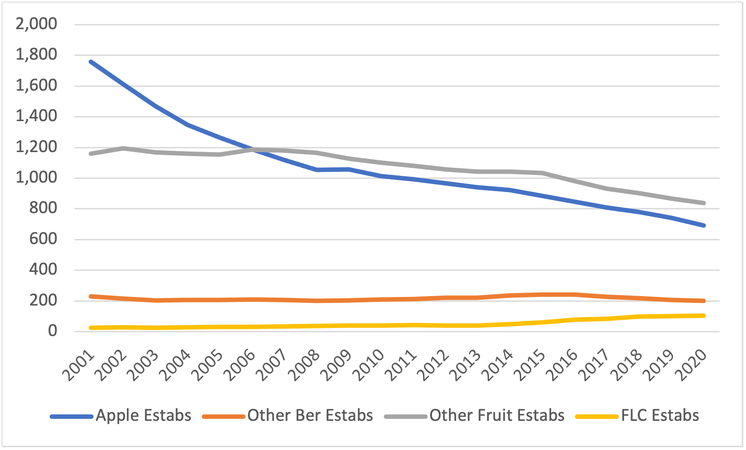 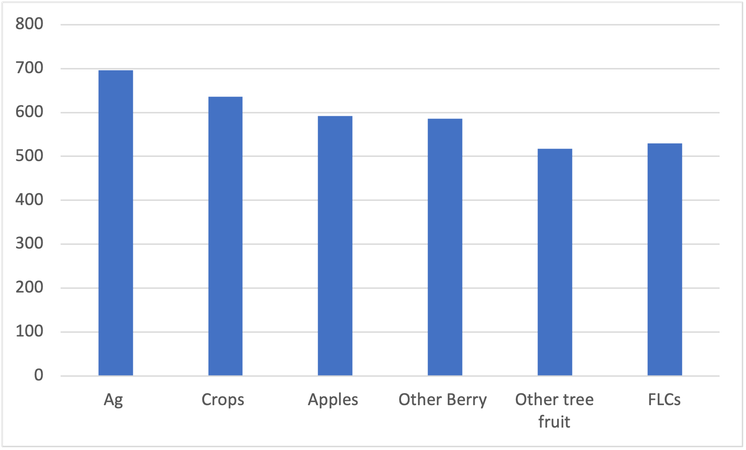 The 2019 to 2020 weekly wage changes ranged from seven to 17 percent, rising fastest where average weekly wages were lowest. 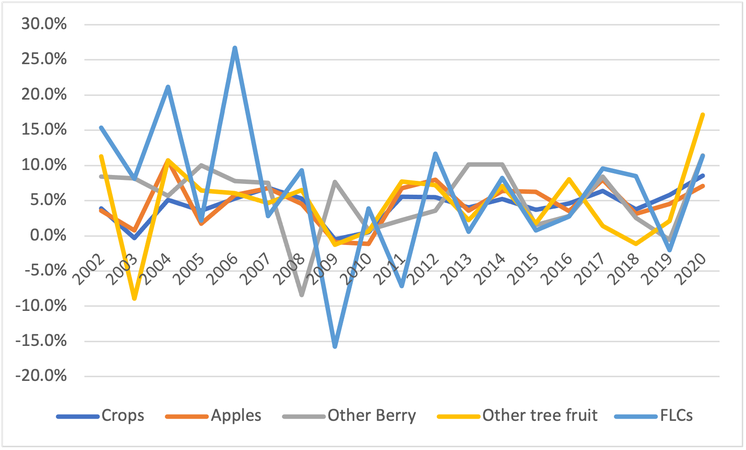