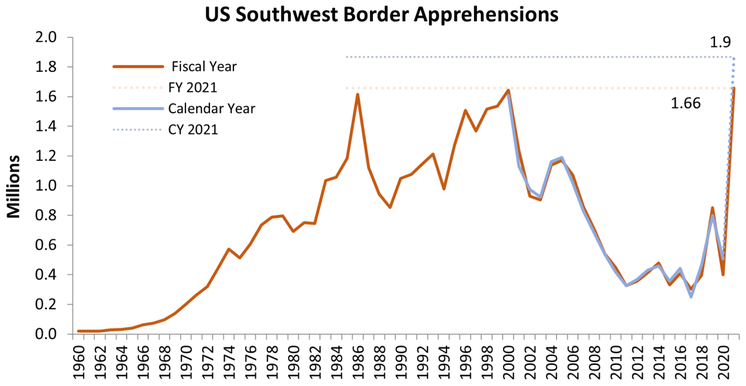 Over 64 percent of those apprehended in FY21 were solo adults, 28 percent were adults with children, and eight percent were children under 18. Some 61 percent of all persons apprehended in FY21 were returned to Mexico under Title 42, including a quarter of the family units but none of the solo children. The Rio Grande Valley in southeastern Texas accounted for a third of FY21 apprehensions.

Mexicans and solo adults were the largest groups apprehended in FY21 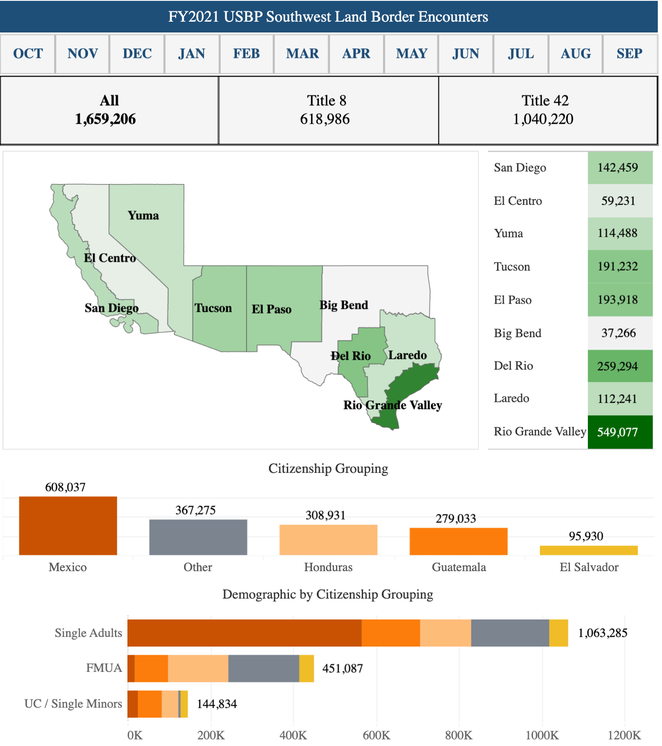 Many of the foreigners who were returned to Mexico tried to re-enter the US. In FY21, 27 percent were recidivists, meaning they had been apprehended at least once before within the fiscal year.

A quarter of foreigners apprehended in FY20 and FY21 were recidivists

There were over 10 million vacant jobs in fall 2021 and eight million unemployed workers, prompting some to suggest that more apprehensions just inside the US border reflected an influx of workers that US employers want to hire. Comparisons of trends in job vacancies and apprehensions are only loosely correlated. Apprehensions and job vacancies fell during and after the 2008-09 recession, and appear to rise together only in 2021. 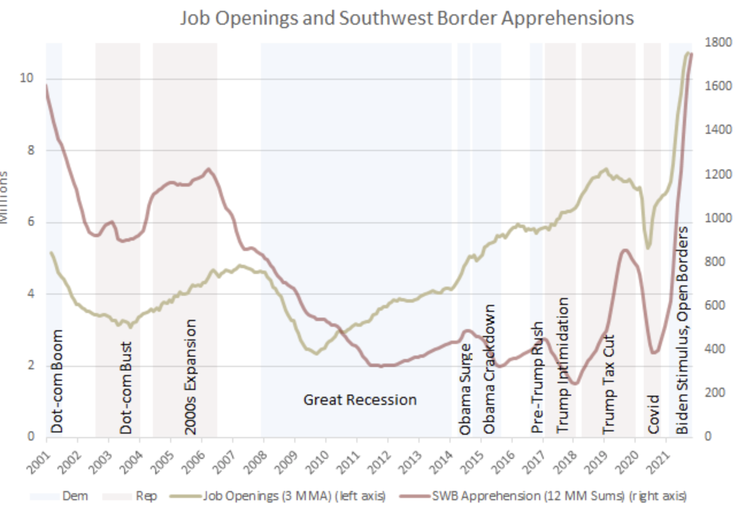 Asylum. Many of the foreigners apprehended just inside the US border with Mexico want asylum, so they seek out Border Patrol agents in order to apply for asylum. If they are not returned to Mexico immediately, USCIS asylum officers interview them to establish whether they have a “credible fear” of persecution in their country of citizenship. Those who pass a credible fear test are usually allowed into the US to apply for asylum. 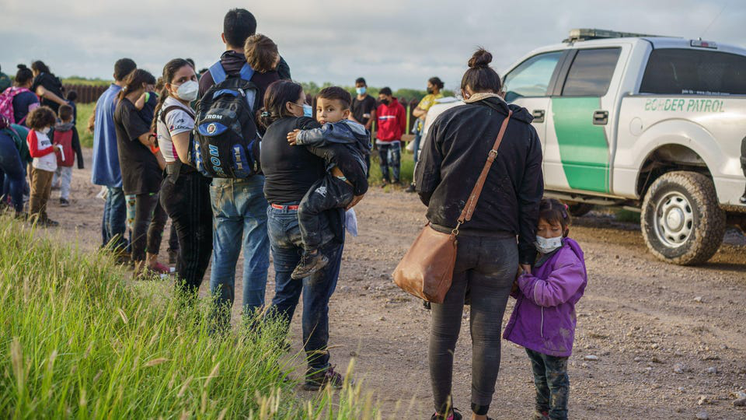 Immigration judges make decisions on asylum applications. However, these judges had a backlog of 1.5 million cases in October 2021, a month in which they completed 21,200 cases. There are almost 700,000 pending asylum cases, which means that asylum applicants may be able to work legally and to send their children to K-12 schools for several years while their asylum applications are pending. About 80 percent of asylum seekers are not recognized as refugees, but many rejected asylum seekers remain in the US.

In August 2021, DHS proposed that the asylum officers who make credible fear decisions at the border should also decide whether the foreigner qualifies as a refugee in order to speed up the asylum process and remove foreigners not recognized as refugees. Asylum officers already make decisions on asylum applications from foreigners who are inside the US and make offensive or affirmative applications, meaning the foreigner is in the US on a student or tourist visa and applies for refugee status. DHS proposed that asylum officers also decide defensive asylum cases at the border, where foreigners who are apprehended seek to avoid removal by arguing that they need asylum in the US.

Haitians. Some 30,000 Haitians arrived in Del Rio, TX in September 2021, including many who were living in Brazil and Chile. A 2010 earthquake in Haiti killed over 200,000 people, prompting Brazil to offer work permits to almost 100,000 Haitians and Chile to allow 70,000 Haitians to immigrate. Many of the Haitians who left Brazil and Chile for the US in summer 2021 said that they faced discrimination and wanted more opportunity in the US.

The Haitians camped under an international bridge across the Rio Grande River, and moved back and forth between Mexico and the US because the river has little water in summer. Photos of Border Patrol agents on horseback trying to prevent Haitians returning to the US drew widespread condemnation, including from President Biden. 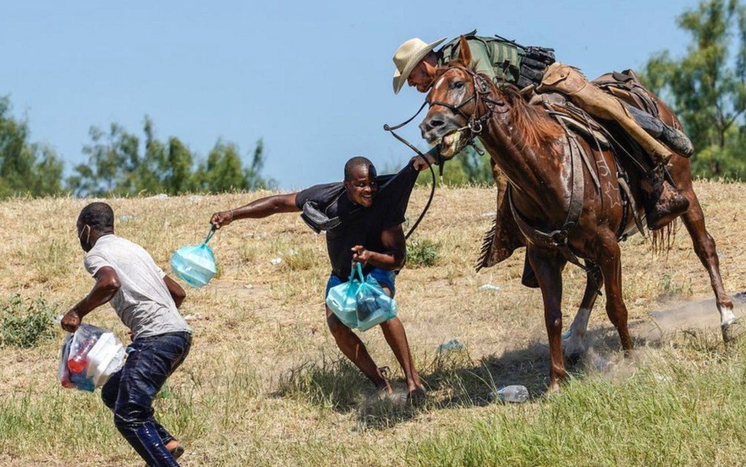 To halt the influx of Haitians, 8,500 were deported to Haiti on over 80 flights, prompting most of the others to return to Mexico. Some 8,000 Haitians were admitted to the US to apply for asylum, which they are unlikely to receive because they were “firmly resettled” in Brazil and Chile. If they do not receive asylum in the US, many of the Haitians want to return to Brazil or Chile rather than Haiti.

Americans are divided about how to respond to asylum seekers who enter the US from Mexico. An April 2021 Pew poll found that two-thirds of respondents disapproved of how the US government was handling asylum seeking at the border. Most respondents want the government to add agents to police the border and to process children quickly. Almost half say that the US government should take steps to reduce the number of foreigners seeking asylum in the US. 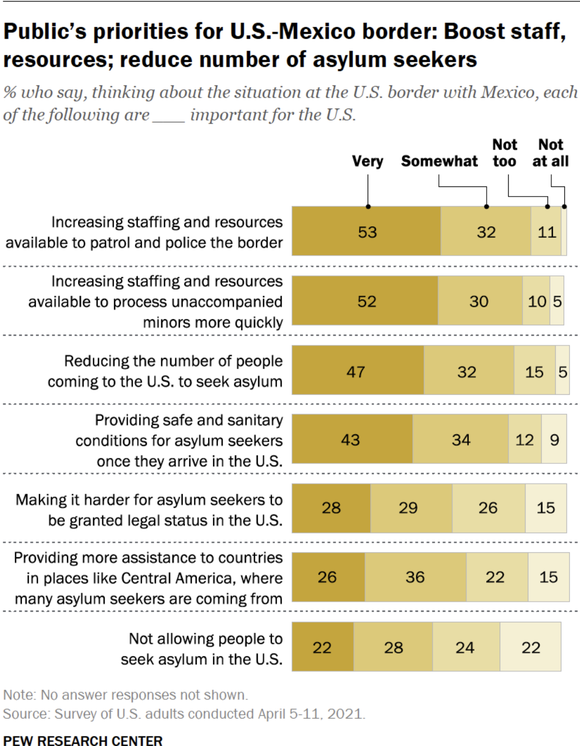