Central American Migration to the US

There were 3.8 million US residents who were born in Central America in 2019, almost all from El Salvador, Guatemala, and Honduras, the Northern Triangle countries. Civil wars in the 1980s, hurricanes and earthquakes in the late 1990s and early 2000s, and government corruption and gang-related crime are the major the push factors encouraging Central Americans to emigrate, while the growing Central American diaspora created a pull into the US.

The number of Central Americans in the US increased more than tenfold between 2000 and 2020, from 350,000 to almost four million, including over 1.4 million Salvadorans, 1.1 million Guatemalans, and 750,000 Hondurans. US residents born in Central America were eight percent of the 45 million foreign-born US residents in 2019.

⅓ of Central American immigrants are in LA, NY, and Wash DC

Most Central Americans in the US are poorly educated and do not speak English well. Half of those 25 and older did not complete high school, and two thirds had limited English proficiency; seven percent said they spoke English well. The median household incomes of Central American immigrants are lower, and their poverty rates are higher, than for the US born and other immigrants.

Trump. Central Americans seeking to illegally enter the US and apply for asylum or go to work must transit Mexico, where they are subject to criminal gangs that prey on them. Traveling in a caravan through Mexico is safer and attracts food and transportation donations, but the publicity generated by the caravan can make it more difficult to enter the US and apply for asylum.

President Trump was especially disturbed by caravans of Central Americans traveling through Mexico to the US, and pressured Mexico and Northern Triangle countries to take steps to make it harder for caravans to form and to reach the US. Under the 1997 Flores settlement and later modifications, the US government must release children who illegally enter the US within 20 days from being apprehended. This means that adults arriving with children were usually released into the US to apply for asylum, and most lived with family and friends for several years until they were scheduled to appear before an immigration judge. Many did not appear; about 20 percent were recognized as refugees.

Trump criticized this catch-and-release policy, and DHS in May-June 2018 implemented a short-lived zero-tolerance policy for unauthorized foreigners by bringing criminal charges against all adults who entered the US illegally and separating them from their children, most of whom were sent to relatives in the US or housed in child-care facilities. The purpose of family separation was to deter migrants from trying to enter the US unlawfully with their children. Public protests and several court decisions ended family separation.

The Trump Administration instituted the Migration Protection Protocols or Remain in Mexico program, which obliged asylum seekers to wait in Mexico until an immigration judge could hear their case. After March 2020, most foreigners seeking to enter the US from Mexico were returned under Title 42 of the Public Health Act to prevent the spread of covid. The Biden Administration stopped the MPP in January 2021, but restarted MPP in December 2021 under the order of a federal judge.

Biden. The Biden Administration promised to reverse Trump-era migration policies, which may have contributed to a record 1.7 million foreigners apprehended just inside the US border with Mexico in FY21. Vice President Kamala Harris led an effort to provide $1 billion a year in US aid to tackle the root causes of migration from Guatemala, Honduras and El Salvador. Harris attributed emigration to “the violence, the corruption, the gangs and the political instability, hunger, hurricanes, earthquakes, and natural disasters” in the region.

In a visit to the region in June 2021 Harris said: “Do not come. Do not come. The United States will continue to enforce our laws and secure our border…if you come to our border, you will be turned back.”

There are many efforts underway to change the narrative in Guatemala, Honduras and El Salvador so that residents perceive opportunity at home, including reducing government corruption and gang violence while promoting job-creating development, However, these efforts are likely to require time to reduce incentives to emigrate.

Some recommend creating new legal pathways to the US to discourage unauthorized migration from Central America. Migrants now pay smuggling fees of $5,000 to $10,000 to reach the US on journeys that often involve danger and broken promises. The prospect of US employers paying all worker costs for legal US jobs could be a substitute for unauthorized migration.

However, more legal pathways to work in the US could also increase unauthorized migration, especially if the prospect of legal migration encourages more people to want to emigrate, but there are too few job slots. Fewer than 25,000 H-2A and H-2B visas a year are granted to Central Americans, where there are often 10 or 20 applicants for each US job. If the US government succeeds in increasing the number of visas by 10 percent, there may be a 100 percent increase in applicants, which could lead to disappointment and more illegal migration.

Study. Biden Administration efforts to reduce emigration pressures have led to many studies of the root causes of migration and what could dampen them. An MIT-MPI study released in November 2021 that involved interviews with 5,000 households in summer 2021 found that over 40 percent of those interviewed wanted to migrate to the US, but fewer attempted to migrate due the cost of $10,000 per person in smuggling fees and the desire to remain with family members at home. Of those who tried to migrate to the US, over 55 percent succeeded in entering the US.

5,000 households were asked about their plans to migrate in April-May 2021 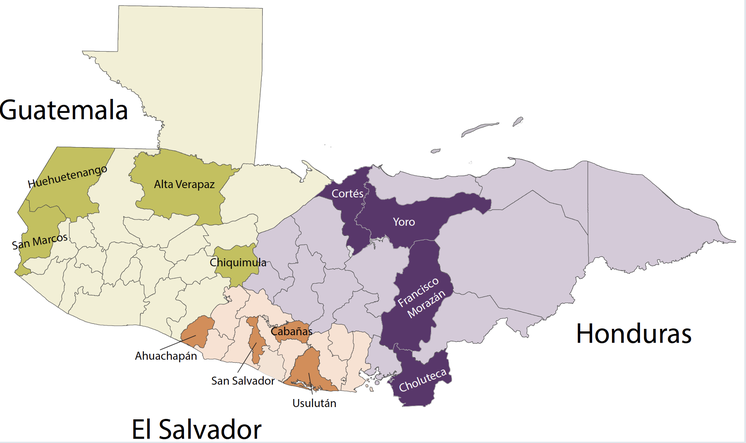 A quarter of the households had a recent migrant, defined as a household member who emigrated or tried to emigrate during the previous five years, and over 90 percent of those who migrated tried to or succeeded in reaching the US. Some 30 percent of households received remittances, which were spent primarily on food, housing, and health care.

Two thirds of recent migrants were men. half of whom were 18 to 34. If entire households emigrated, they were not in the survey.

In all three countries, twice as many households reported that their standard of living was getting worse. In Honduras, four times more residents reported worsening rather than improving economic conditions for their households. Sample households in El Salvador reported spending a median $70 per month per household member, including $30 for food. Spending was lower in Guatemala at $50 total and $20 on food, and was $60 and $30 in Honduras.

The perception that there is little opportunity for upward mobility at home fuels the desire to emigrate from Central America. Among the 5,000 households in the sample, 43 percent had a member who wanted to emigrate, six percent made plans to leave, and three percent made travel preparations such as borrowing money or contacting smugglers. Desire, plans, and preparation shares were higher in households that had a member who already migrated.

The major reason to migrate was to find economic opportunities in the US. Of those who desired to emigrate, 90 percent cited economic factors, far more than the less than 10 percent who cited violence, family unification, and climate factors. Reducing or ending economic reasons to emigrate is likely to take decades.

90% of those who desire to emigrate cited economic reasons 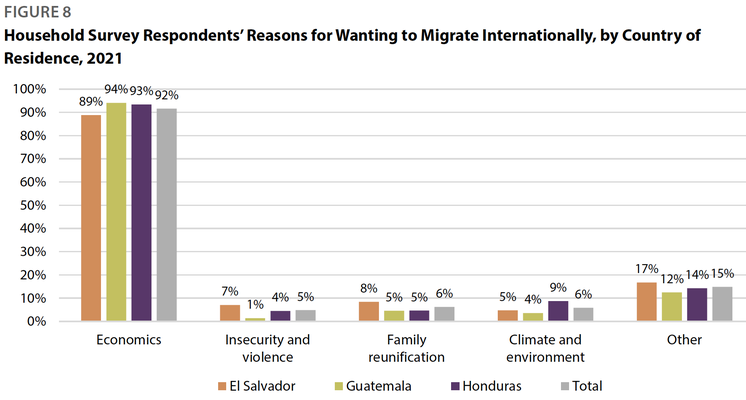 Most households with recent migrants reported success in crossing the Mexico-US border: half reached the US and seven percent went to other countries. A third of recent Central American migrants returned, usually because they were apprehended and returned by authorities. 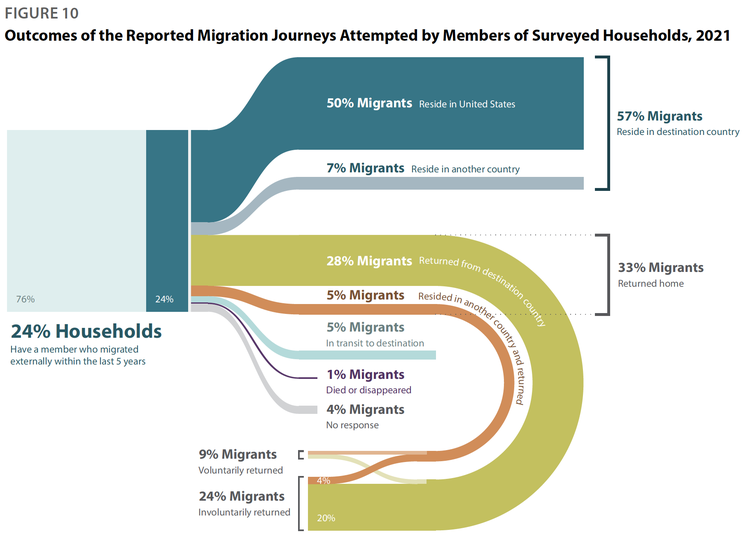 In most countries, the poorest people cannot afford to emigrate. However, in the Northern Triangle countries, even very poor residents find the means to emigrate. A quarter of all sample households had a member who emigrated in the previous five years, and this 25 percent emigration rate was similar for very low income households, defined as those with incomes of less than $2.50 per household member per month. 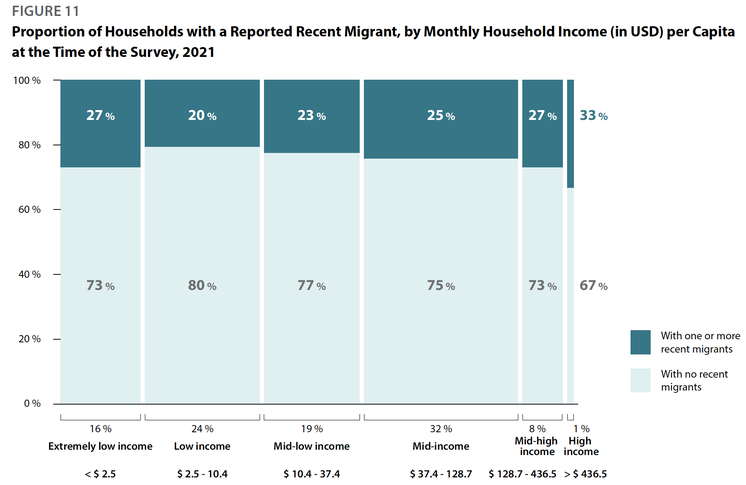 Almost 90 percent of the recent migrants went illegally, paying $2 billion in migration costs, primarily in the form of $10,000 per person fees paid to smugglers. Most migrants who went illegally relied on relatives abroad and at home to finance their trip; those who went on their own or with a caravan were most likely to self-finance the trip. 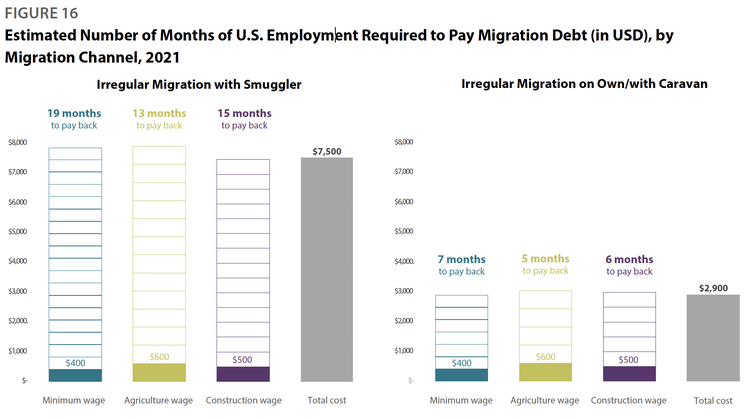 Once in the US, a sixth of recent migrants found jobs in US agriculture, even though a quarter had been employed in agriculture in their countries of origin (a third of migrants from El Salvador and Guatemala and an eighth of those from Honduras were employed in agriculture at home). The share of recent migrants in salaried employment rose from 15 percent at home to 20 percent in the US, and the 13 percent who were students at home fell to seven percent in the US. 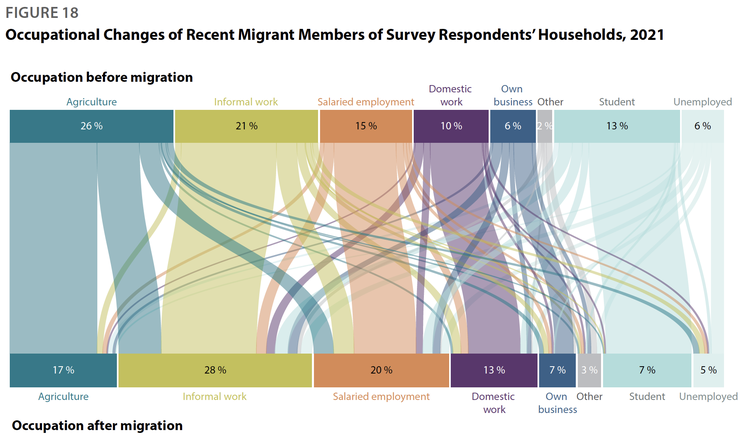