The San Quintín area of Mexico’s Baja California state has 11,000 hectares of fruits and vegetables. Most are produced for export, including strawberries, other berries, and tomatoes. Baja California has three major agricultural regions: San Quintín generated 55 percent of the value of farm output in Baja state in 2019, Mexicali, 38 percent, and Ensenada, seven percent.

The Baja California Agricultural Council, founded in 2001 to improve compliance with farm labor laws, facilitated interviews with 963 workers employed on 12 export farms that had a total of 19,200 workers in mid-2021. These farms employed a third of the estimated 53,000 hired farm workers in Baja state. Another association, the Unión Agricola Regional, includes smaller farms that produce for the Mexican market, and some farms do not belong to either association.

Over 80 percent of Baja farm workers were born in another Mexican state. This means that the farm workforce in San Quintín includes older indigenous workers who migrated and settled over decade ago as well as younger indigenous workers who continue to arrive from southern Mexico. Both settled and temporary migrants have relatively low levels of education, about seven years for both men and women, and many speak indigenous languages. Some of these younger Baja workers are recruited by US farm employers to be H-2A guest workers.

Living conditions for San Quintín farm workers are improving. However, government agencies often fail to deliver the health and child care services that are supported by payroll taxes, leading to employer and worker frustration. There is a grey area between Council-member export farms that comply with labor laws and other farms that pay lower wages and offer no benefits to day laborers; some of the produce from non-Council farms winds up being exported to the US.

San Quintín became a separate municipality from Ensenada in February 2020. However, the local San Quintín government has been slow to provide public water and sewer services to expanding farm worker settlements.

Evolution. The San Quintín region developed into an agricultural export zone in the 1970s and 1980s, when tomato farmers from Sinaloa and Mexicali began to produce in San Quintín from June through September. The completion of the Transpeninsular Highway in 1973 allowed produce from San Quintín to be transported efficiently to the US border. 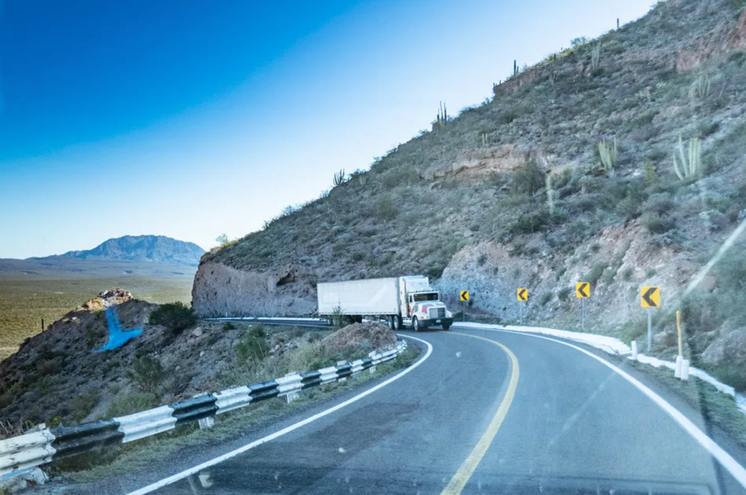 Tomato farms in San Quintín protect growing plants under plastic-covered hoops. The expansion of production increased the demand for irrigation water and depleted aquifers, resulting in the intrusion of salt water into aquifers and wells. Agriculture uses 80 percent of San Quintín water.

Seawater has about 35,000 mg per liter of total dissolved solids. Most crops require fewer than 3,000 mg of TDS per liter, and drinking water has less than 400 mg per liter. Growers built dozens of desalination plants to remove salt from well water in order to irrigate crops, and today the San Quintín region has over 80 desalination plants, including one that converts sea water into irrigation water. 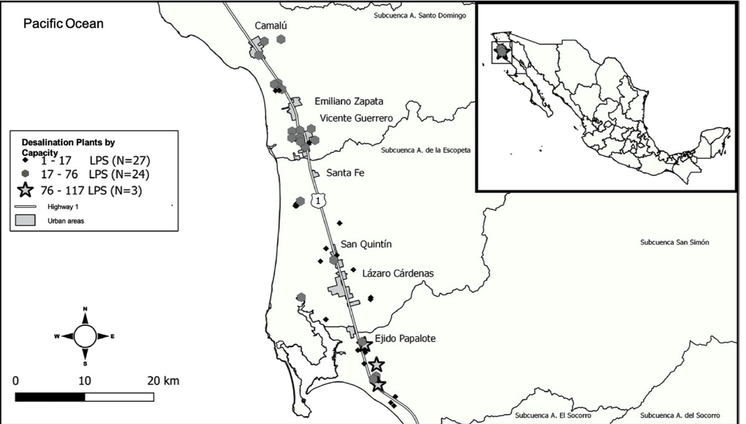 The San Quintín area had 2,700 hectares of strawberries in 2019, 1,500 hectares of tomatoes, and 4,000 hectares of barley and wheat, demonstrating that low-value crops continue to occupy much of the area’s crop land. All of the grains and some of the fruits and vegetables are for the domestic market.

Most fruit and vegetable growers have contracts with US buyers, who often provide farmers with plants, technologies and advice on farming, and buy their produce. This reduces grower risks, since the US buyers often finance growing costs and deduct loans from the final payments to growers. Buyers absorb losses if pests or weather result in less production than expected. 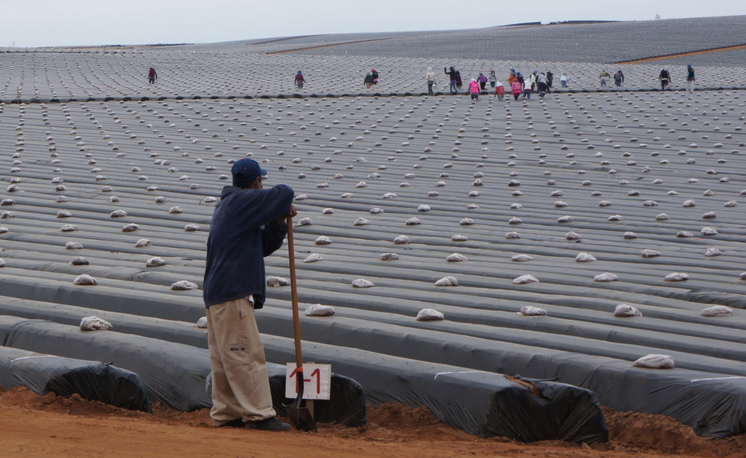 Children under 18 have been banned from working in commercial agriculture under a June 2015 law, and the 2021 worker survey found only one 16-year old. Reports from 2000 suggest that child labor was widespread at that time. After accidents, the Baja government in 1998 required farm workers to be transported in licensed and insured vehicles.

Wages. The monthly wages of the workers employed on San Quintín Council farms averaged 11,000 pesos or $550 a month for six-day work weeks (5.6 days for tomato workers and six-day weeks for berry workers); men earned 10 percent more than women. San Quintín wages were significantly higher than the wages of Sinaloa vegetable workers (about 8,000 pesos a month) or Jalisco berry workers (7,000 pesos). A third of the male farm workers in San Quintín, and almost 20 percent of the female workers, sent remittances to their families in southern Mexican states, paying seven percent of the amount sent in remittance costs.

During harvesting, many workers are paid piece rates that reflect the units of work accomplished, enabling some to earn significantly more than the guaranteed daily wage. This means that daily wages, which exceed the minimum wage, fluctuate with variables that reflect worker capabilities as well as weather, yields, market conditions and other factors beyond the control of workers. Average daily wages are lower than peak-season earnings.

Almost all workers on Council farms reported that their employers enrolled them in IMSS health services, but few reported enrollment in child care services even though enrollment covers both services. More workers reported receiving child care from their employers than from IMSS. Eight child care centers in the San Quintín area closed in 2021 when the government’s Estancias Infantiles subsidies ended as part of a movement to reduce subsidies for export agriculture.

Enrollment in IMSS does not necessarily mean access to the benefits IMSS should provide to covered workers. Almost all workers reported access to IMSS health care services, but far fewer had access to child care and other benefits promised by IMSS.

It should be emphasized that enrollment in IMSS at a point in time does not mean continuous IMSS coverage. IMSS taxes are lower for workers employed for less than 27 weeks, so some employers lay off employees as they approach 27 weeks of employment and later rehire them, reducing their payroll taxes and interrupting IMSS coverage. Some Council farms hire day laborers when they need additional workers for a short time, or use contractors to obtain workers for peak labor needs, and they may not enroll day laborers or contracted workers in IMSS.

Housing. San Quintín farm workers occupy three major types of housing, and the quality of their housing is often lower than in other areas of Mexico with export agriculture. Employer-provided housing for migrants who are recruited directly by the farm sometimes reproduce the layout of villages in southern Mexico, with a plaza that includes a store and clinic as well as houses for workers and play areas. Some employers attempt to ensure that prices in such camp stores are kept low.

The second type of housing are private dorms or rooms for migrants who arrive on their own and seek formal jobs on export farms or informal jobs on farms that produce for the Mexican market. Migrants pay rent for simple housing that often involves shared toilets and water tanks that must be filled by the tenant.

The third type of housing involves privately owned lots of 3,300 to 6,600 square feet that cost $1,500 to $3,000 and on which workers build their own housing. Developers often provide electricity to these lots, but not water and sewer services, which means that people must buy water to fill their own tanks.

INFONAVIT should give covered workers access to housing subsidies. However, some farm workers do not understand that INFONAVIT provides loans for housing rather than housing, and most San Quintín workers have not worked enough years to be eligible for significant housing benefits (average seniority among the workers interviewed was three years). Workers with building lots often lack the clear title to the land required for an INFONAVIT loan, an issue that INFONAVIT is trying to resolve with a pilot project. 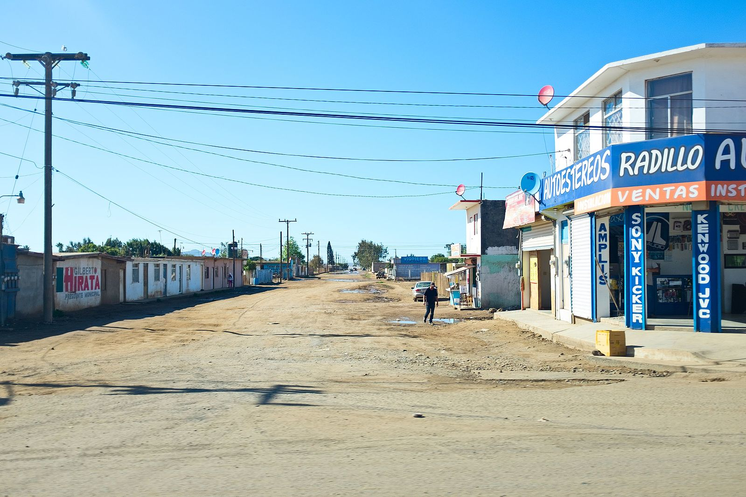 The high cost of living in Baja restricts household size to 2.7, almost a full person less than the households of farm workers who are employed in export agriculture in Sinaloa or Jalisco.

Informal. Informal or day laborers in San Quintín earn much less and have fewer benefits than workers who are employed on Council farms. Day laborers earn less because their employers pay them lower wages and they do not work every day.

Some workers prefer informal day jobs to formal jobs on Council farms. During peak harvest periods, and while working for piece rate wages, so-called champion informal workers may have higher daily earnings than formal-sector workers, and workers with child care or other responsibilities may prefer to choose when to work rather than feel obliged to report each day as Council farms expect. Some informal workers are too old or too young to be hired by export farms, so they seek out employers who will hire them on a daily basis.

A day labor market in Colonia Lázaro Cárdenas facilitates job matching for pay and go or saliendo y pagando workers and smaller growers who pay cash wages at the end of each work day. Contractors with vehicles shout out wage offers to induce workers to board their buses, and workers select the bus with the best option for them. Bus drivers often receive a fee from the smaller growers to whom they deliver busloads of day laborers and sometimes from workers as well, such as charging 30 pesos for a worker earning 250 pesos a day for transportation.

Protests. Given high wages and almost universal enrollment in IMSS, why did San Quintín workers go on strike in March 2015? There are several reasons, including the high cost of living in Baja California and the low level of public services such as running water and sewer services that are cheap or free elsewhere in Mexico.

The supply of farm workers in San Quintín was affected by broader trends in Mexico-US migration. Between the late 1980s and the 2008-09 recession, there was large-scale migration from rural Mexico to rural and urban areas of the US. Between 2008-09 and 2013-14, a combination of recession in the US and tougher border enforcement sharply reduced Mexico-US migration. Since 2015, farm wages have been rising in both Mexico and the US as the stock of rural Mexicans migrating to opportunity elsewhere in Mexico or the US decreases.

Worker protests closed the Transpeninsular Highway for 15 days in March 2015, stopping the export of berries and tomatoes at the beginning of the berry harvest. Striking workers demanded an increase in wages from 155 to 300 pesos a day, the enrollment of all workers in IMSS, and the right to organize independent unions to replace the “protection unions” that had signed contracts with employers before most workers were hired. 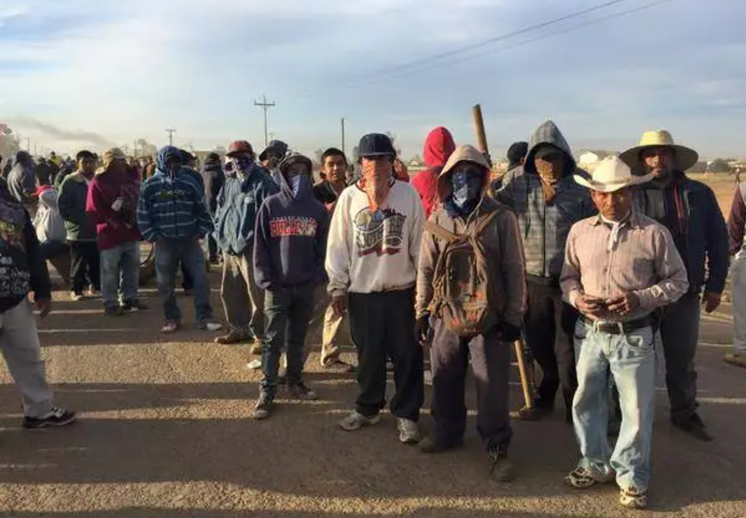 The strike was settled with Council farms agreeing to a 180 peso a day minimum wage and full enrollment of employees in IMSS. Federal, state, and local governments promised to improve public services for settled workers, although much remains to be done. One of the three major farms allowed their employees to vote on whether to retain their union, and the employees voted to retain that union in July 2021; votes at the other two farms are pending.

Some San Quintín workers continued to protest in March 2017 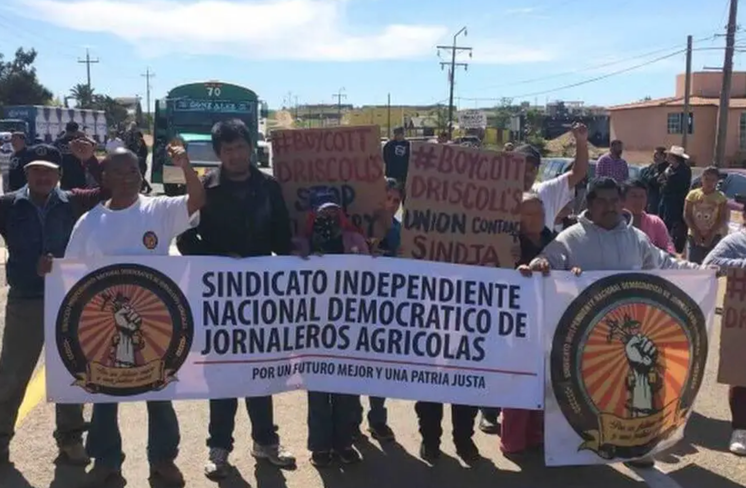 Outlook. The San Quintín area offers a unique climate that permits almost year-round production of high-quality tomatoes and berries that can be exported to the US. Farmers have solved many of the technical challenges including appropriate plant varieties, sufficient irrigation water, and the construction of packing and cooling facilities, but there is a three-way struggle between employers, workers, and the local government about deficient public services for the 120,000 residents that could erupt in future protests.

Zlolniski, Christian. 2019. Made in Baja. The Lives of Farmworkers and Growers behind Mexico's Transnational Agricultural Boom. UC Press.