US and Global Ag Outlook

The three major US crops by acreage are corn, soybeans, and wheat. Their combined acreage of about 230 million acres accounts for over 70 percent of harvested US crop land.

Corn, soybeans and wheat account for 70% of US crop land harvested 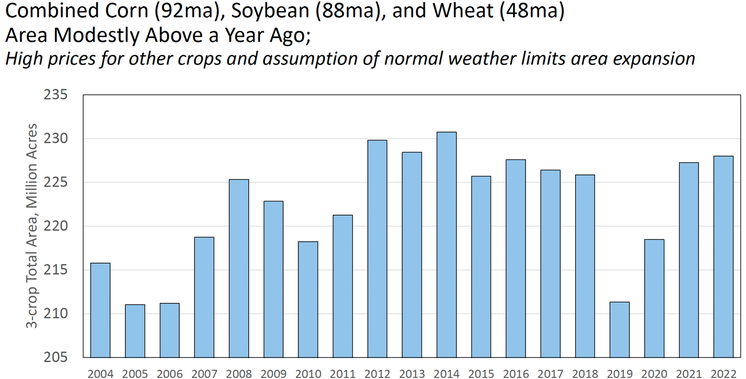 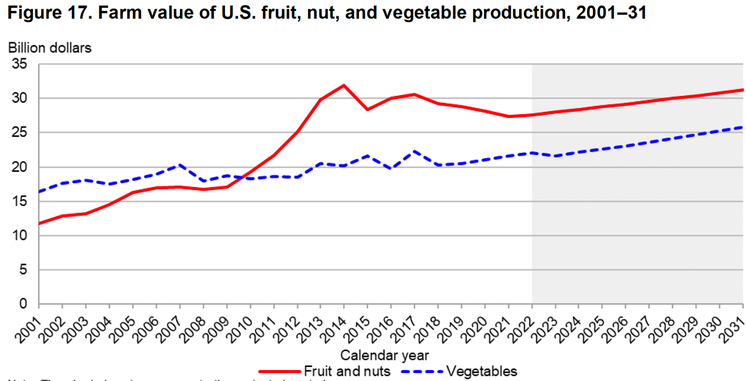 USDA acknowledges that its data collection systems do not fully reflect output from CEA or controlled environment agriculture such as greenhouses and urban vertical farms. CEA production of tomatoes, cucumbers, and other fresh vegetables is rapidly replacing open-field production.

Trade. The US has had an agricultural trade surplus since 1960, exporting farm goods worth more than the value of imported farm goods. However, the US farm trade surplus is projected to become a deficit as the US imports more high-value fruits and vegetables while the value of US exports of meat and grains stabilizes. 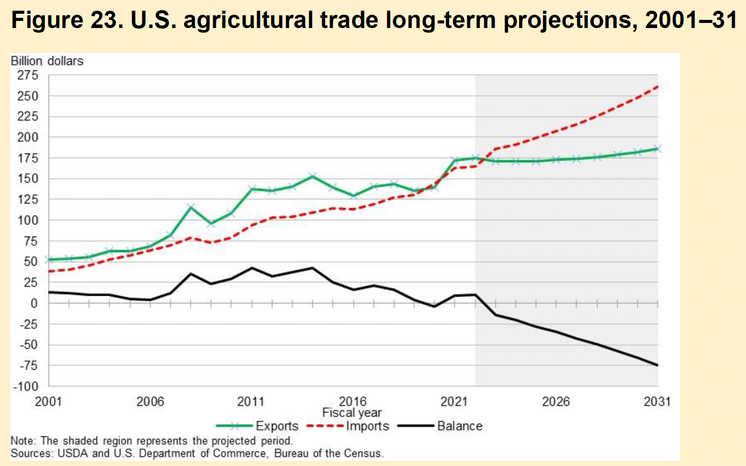 Half of US farm exports are grains and oilseeds that are produced in competition with other major farm exporters including Brazil, Canada, and Russia. The value of US meat and dairy product exports is about equal to the value of US fruit and vegetable exports.

Half of US farm exports are grains and oilseeds 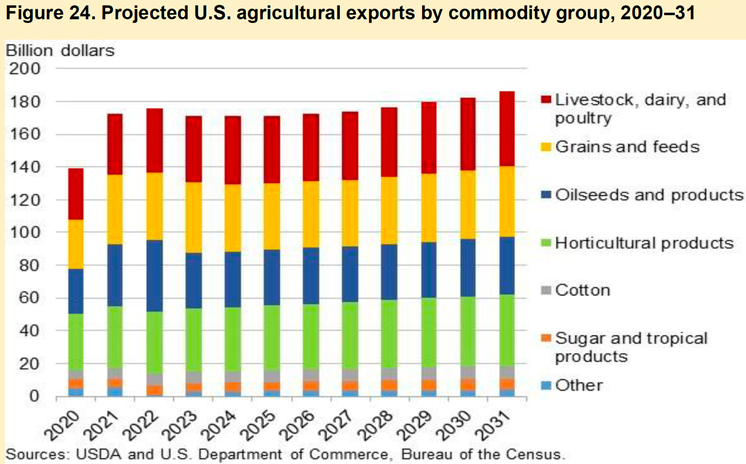 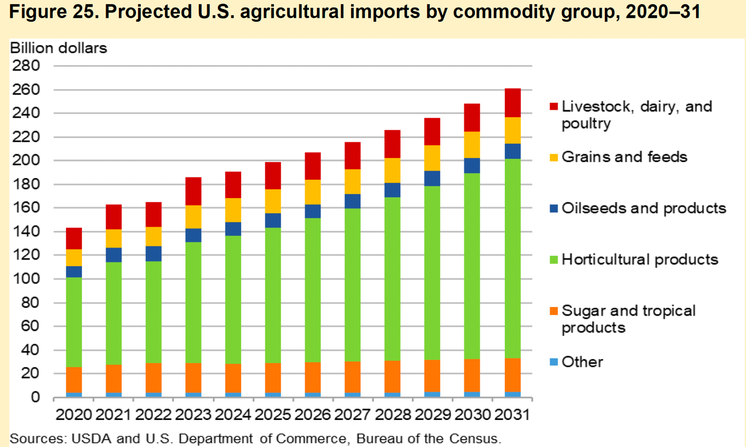 Horticultural imports include beer, wine, and distilled spirits, but most are fresh fruits and vegetables and packaged or prepared food products. Many imported horticultural products are organic, making them less sensitive to price and currency fluctuations.

Inflation. Food prices are expected to increase in 2022 due to increased costs for farm inputs such as fertilizers, rising labor costs, and shipping cost increases amidst reduced output attributed to drought, natural disasters, and the Russian invasion of Ukraine in February 2022. La Nina weather, which is occurring in 2021-22 in a repeat of 2011-12, typically means droughts in South America and the southern US. 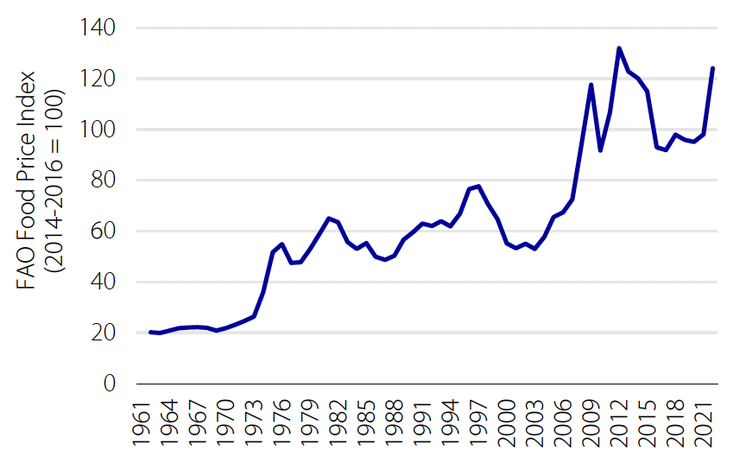 Rabobank expects wheat prices to top $8 a bushel in 2022, corn to decline to about $6 a bushel, and soybean prices to decline to less than $13 a bushel. The price of Arabica coffee is projected to drop from the current $2 a pound by the end of 2022.

The prices of wheat, sugar, and palm oil are rising, while the prices of corn and soybeans are falling

Palm oil is the world’s major vegetable oil, and most of the 80 million metric tons produced each year are from Indonesia, which has 15 million hectares producing 60 million tons, and Malaysia, with five million hectares producing 18 million tons. High fertilizer prices reduced yields of palm oil, while Malaysian covid-prevention policies limited the entry of migrant workers who cut bunches of palm oil fruit from trees for processing. 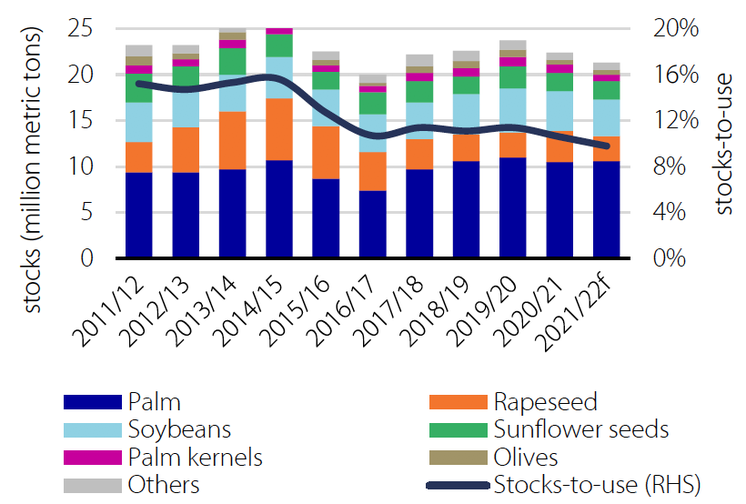 Stocks of coffee went from surplus to shortage during covid, allowing prices to double from about $1 to $2 a pound. Brazil is expected to produce 45 million bags of Arabica and 21 million bags of Robusta coffee in 2022-23, which should reduce coffee prices. 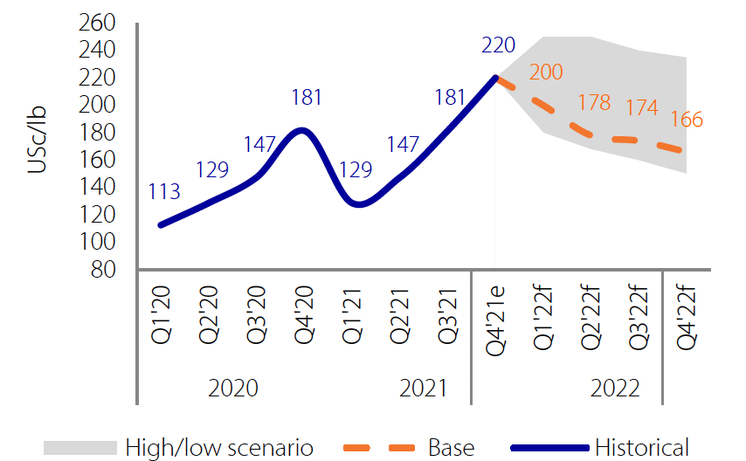 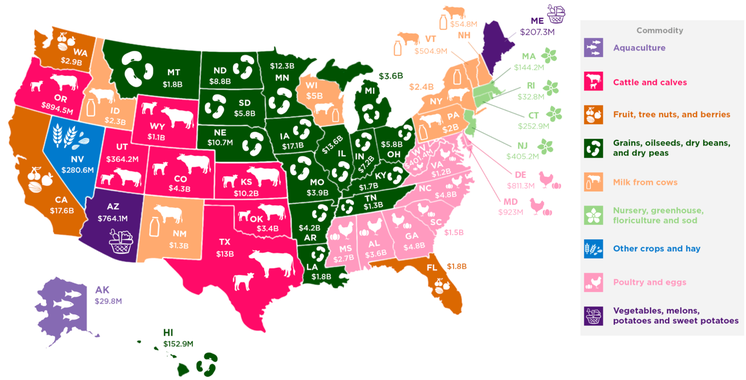