The share of workers employed in agriculture falls as incomes rise

In the US, the share of employment in agriculture fell from a third in 1910 to two percent by 2017, while the population rose from 92 million to 325 million. The value of US farm output, adjusted for inflation, tripled between 1948 and 2017, while employment in agriculture fell by 75 percent, a huge increase in productivity made possible by machines, biological innovations, and irrigation as well as farmers purchasing more materials and services from off-farm suppliers. 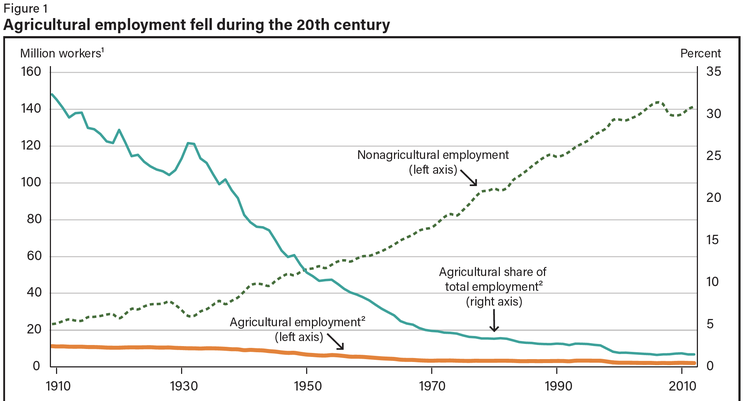 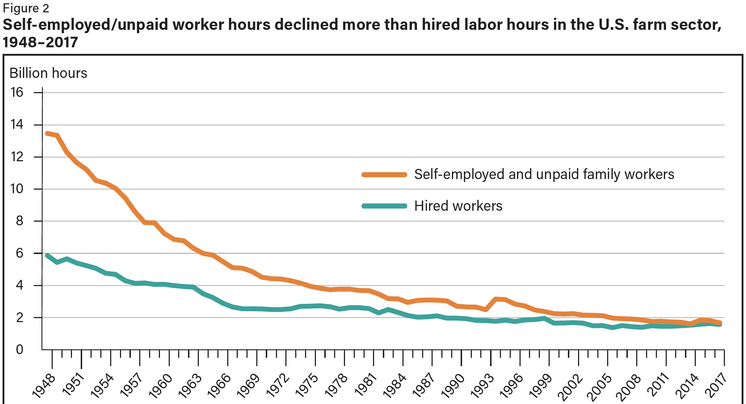 Reliance on hired labor varies by commodity, area, and size of farm. Large farms that produce fruits and vegetables in California and other western states and in Florida and other eastern states are most reliant on hired farm workers.

Hired workers contribute over half of the hours worked in CA, FL, and WA ag 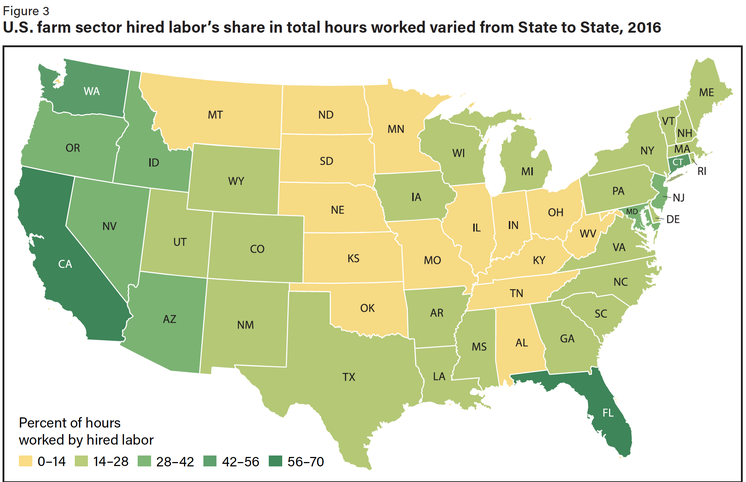 Fewer and larger farms account for most US farm output, and the principal operators of farms are better educated. A higher share of principal farm operators had college degrees in 2016 than all US household heads, and a higher share had some college. Among farm operators, levels of education rise with farm size, so that the higher the farm’s sales, the more likely the farm operator has a college education. 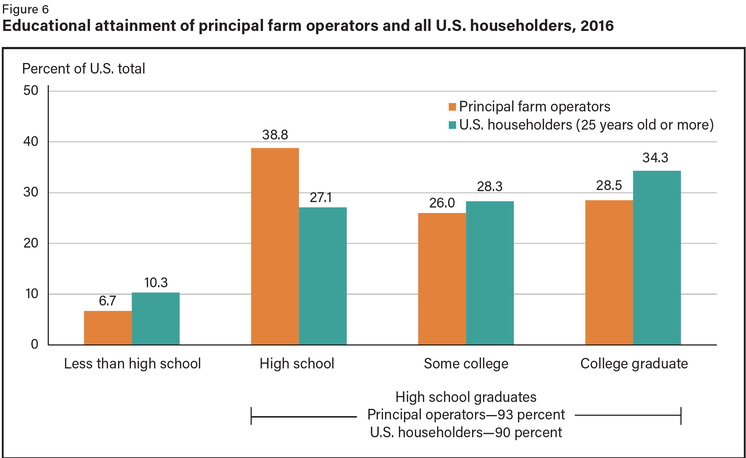 The NAWS, which interviews only non-H-2A hired workers employed on US crop farms, finds similar trends, viz, an aging and more experienced workforce that includes a third women and is half unauthorized. During the 1990s, young and unauthorized Mexican men replaced US-born crop workers. The arrival of unauthorized Mexican newcomer men slowed after the 2008-09 recession, which explains why the non-H-2A crop workforce is getting older, includes more women, and has more US farm work experience.

Over 2/3 of US crop workers were born in Mexico 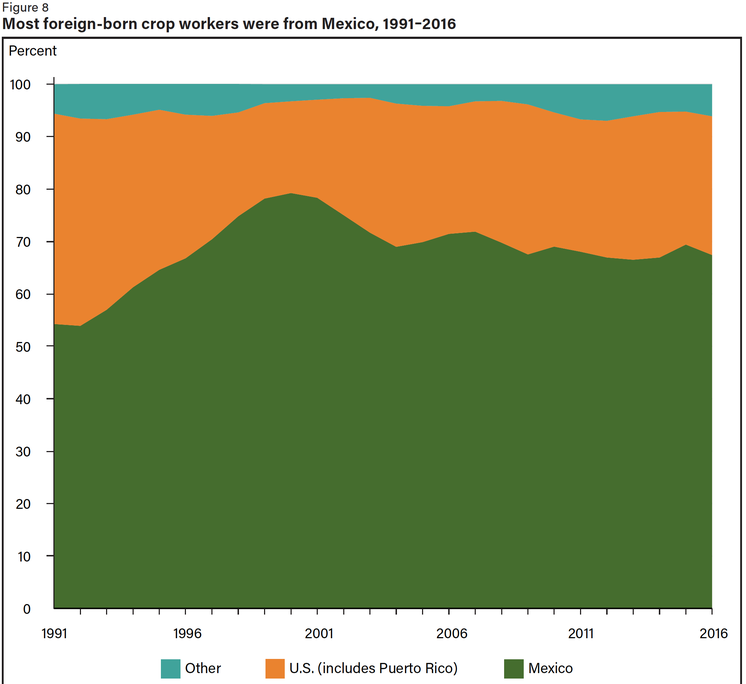 The average educational level of hired crop workers rose over the past two decades, but more for US-born than for Mexican-born workers 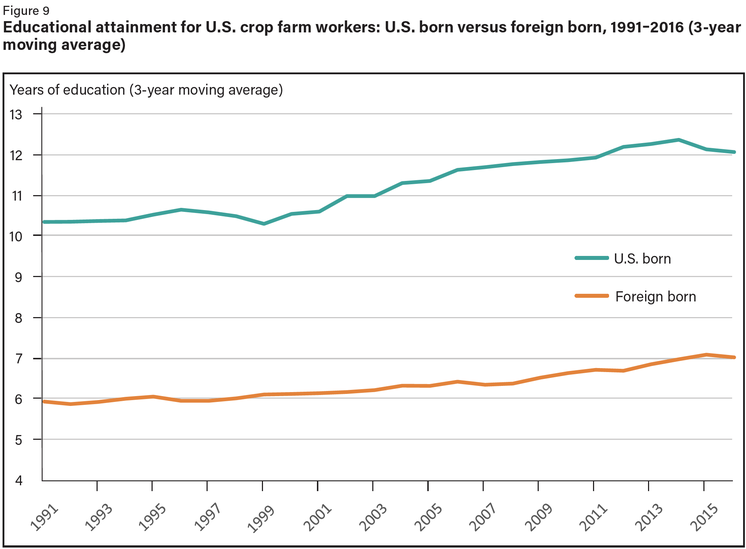 Farm operators are buying more nonfarm services, including contracted labor. When a nonfarm labor contractor brings workers to farms, USDA considers payments to the contractor to be purchasing contract services. USDA surveys only farm operators, not nonfarm businesses that bring workers to farms, which means that USDA collects data on what farmers pay for contract labor, but not on contract labor businesses and their employees. 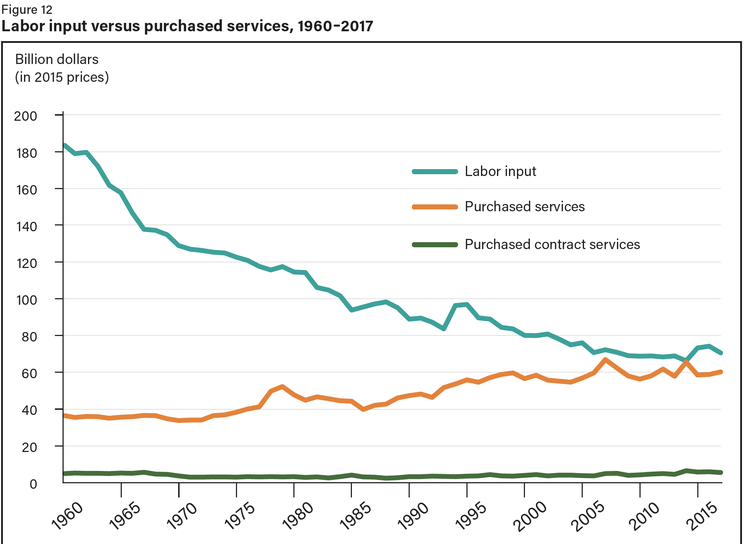 Farm wages are lower than nonfarm wages. The ratio of the average annual wages and salaries of hired farm to nonfarm workers was less than 40 percent in the 1950s, when 20 percent of US farm workers were Mexican Braceros, rose to 55 percent during the 2008-09 recession when many nonfarm workers accepted wage cuts to retain their jobs and health and other benefits, and has fluctuated between 55 and 60 percent since. 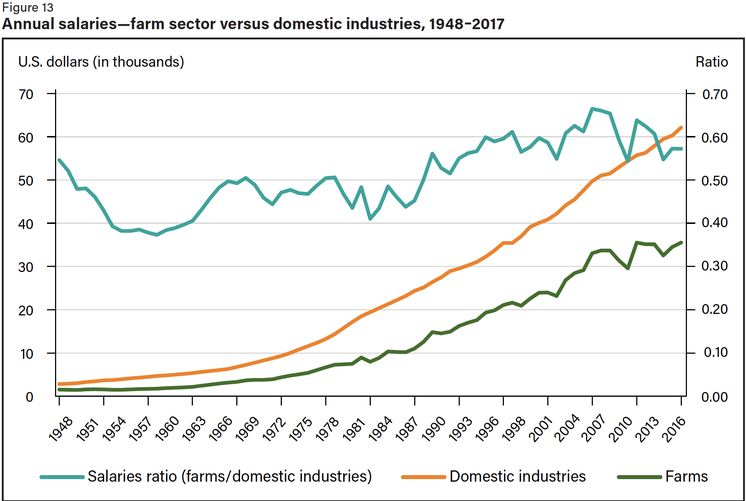 Farm operators, in contrast to hired workers, have household incomes that are higher than those of nonfarm households. 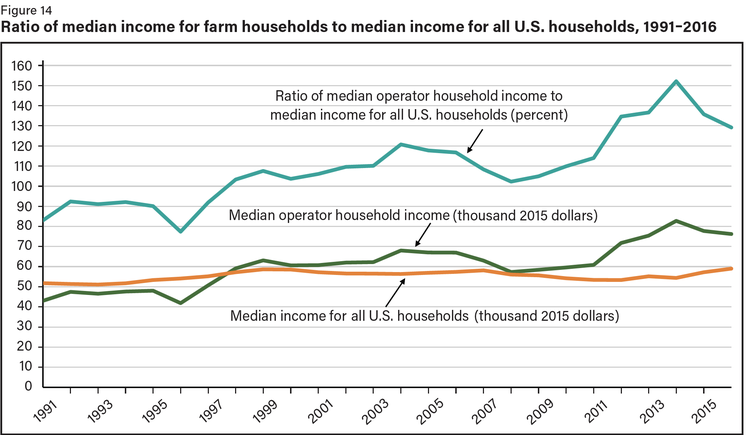