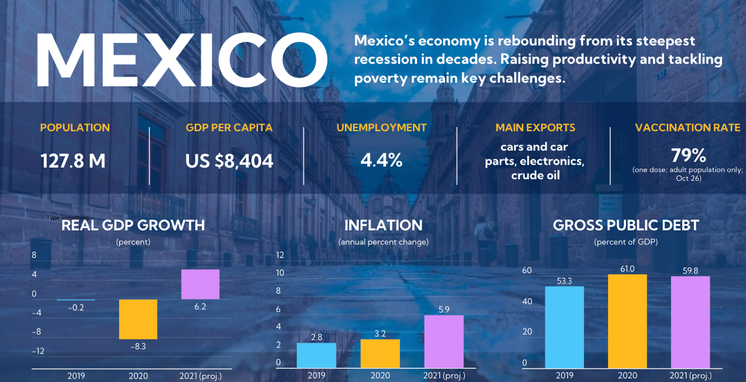 Developing countries usually grow faster than industrial countries, enabling them to narrow per capita differences in GDP. However, Mexico’s slow and uneven growth means that its GDP per capita has been falling relative to US GDP per capita, from a high of 38 percent in 1994 when NAFTA went into effect to 30 percent in 2021 when measured in purchasing power parity.

Mexico’s economic growth is slower than other countries 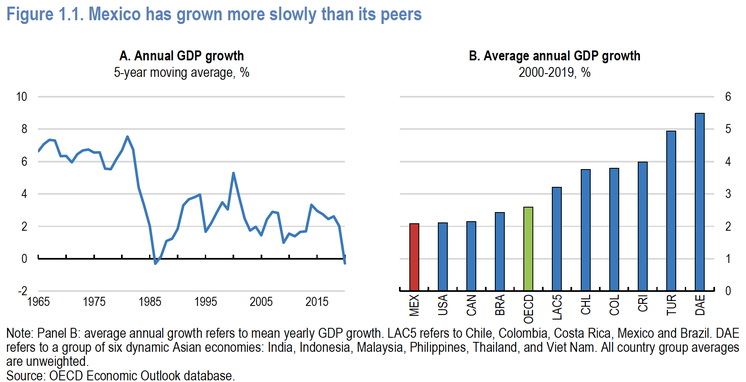 A major reason for slow income growth in Mexico is low productivity. There are large and highly productive firms in Mexico that are well integrated into the global economy, but most firms are small and lack capital and expertise to raise labor productivity. Transforming these informal firms and their employees into more productive workers is hampered by relatively low levels of education, limited access to capital, and costly business regulations. 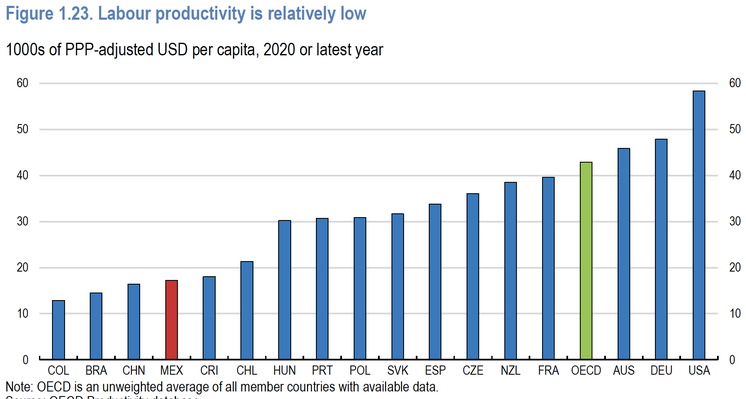 The architect of the 1997 conditional cash transfer program Progresa, economist Santiago Levy, blames slow productivity growth in Mexico on government policies that keep 55 percent of Mexican workers in the informal labor market while raising the cost of labor in the formal labor market, which includes jobs subject to minimum wages and covered by the health and pension system IMSS.

55% of Mexican workers are employed in informal labor markets 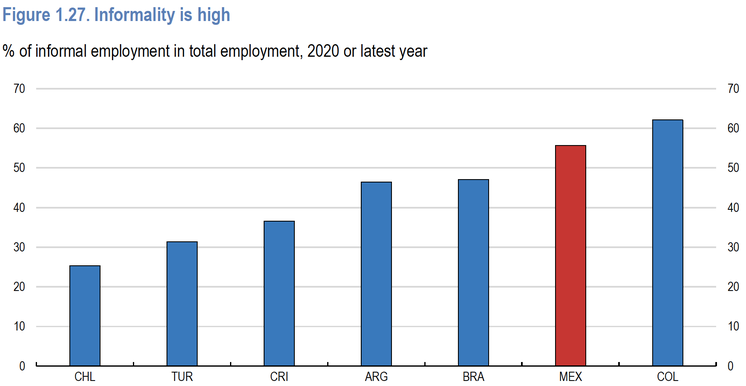 Employers pay taxes of 25 to 30 percent on the wages of formal-sector workers that entitle their employees to a wide range of benefits, from child and health care to bonuses and pensions. IMSS is often unable to deliver these promised services efficiently, which means that both employers and covered employees value IMSS services at much less than their cost. IMSS deficiencies contribute to informal employment, as employers seek to evade IMSS payroll taxes and their employees do not complain.

Only 30 percent of retired Mexican workers who were enrolled in IMSS receive pensions. Mandatory employer contributions to IMSS are scheduled to increase from the current 5.5 percent to 13.9 percent by 2030, and IMSS-covered workers will be able to receive pension benefits after 15 years of IMSS employment, down from the current 25 years. Fees charged to manage pension funds are to be capped.

About 55 percent of Mexican workers, and 90 percent of Mexican firms, are informal, that is, not enrolled in IMSS or similar systems for public employees. Levy argues that informality continues because the Mexican government has developed systems that provide health and other services at no cost to informal workers, reducing bottom-up pressure from workers to encourage their employers to formalize their jobs.

Mexico does not have an unemployment insurance system. Instead, labor laws require employers to pay severance to formal sector workers who lose their jobs. The OECD recommends diverting current employer contributions to Infonavit, a fund that helps covered employees to build or finance housing, to create a UI system. The OECD found that developing a UI system would do far more to raise the incomes of low earners than reducing informality under the current system or increasing female labor force participation.

The OECD emphasizes that investment in Mexico declined sharply in 2020 and has not yet recovered to pre-pandemic levels. Investment was slowed first by President Trump’s threats to NAFTA and then by President AMLO’s cancellation of several major projects that were already underway. Investment in Mexico could rebound as US firms seek to produce nearby rather than in Asia, but the AMLO government added to uncertainty by seeking to prioritize the roles of state-owned PEMEX in oil and CFE in electricity.

Investment in Mexico has been falling, and has not yet rebounded to pre-covid levels 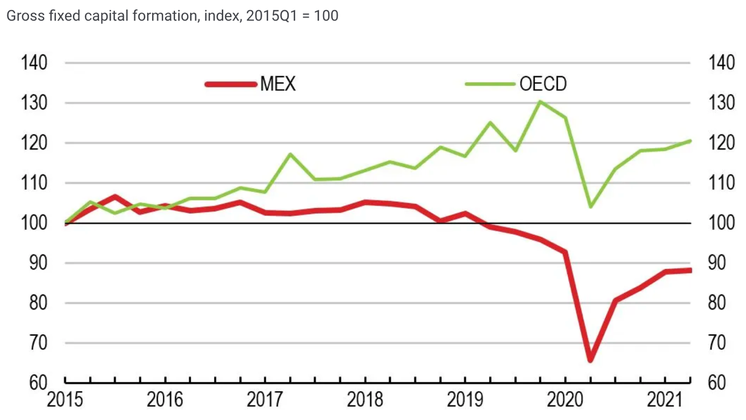 Between 2014 and 2016, many Mexican opinion leaders cited a lack of public safety as a major factor that reduced economic growth. After the election of AMLO in 2018, policy uncertainty became a more important constraint on economic growth. 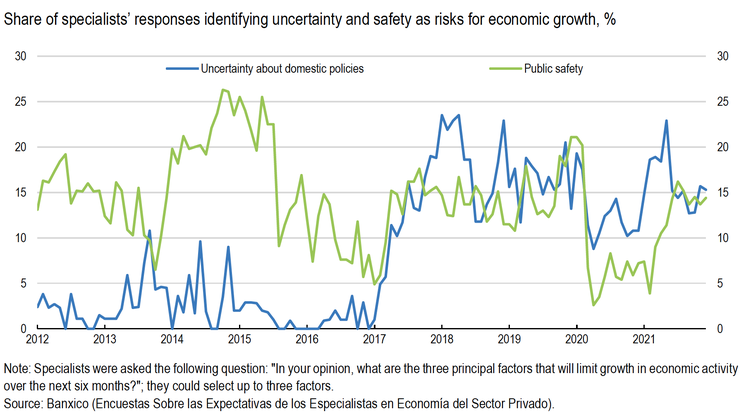 Corruption distorts incentives and slows economic growth. Mexico is perceived to be more corrupt than other Latin American and OECD countries. AMLO is believed to be clean, but his penchant for centralizing power in the presidency and reducing the power of independent agencies reduces checks and balances and slows efforts to root out entrenched corruption.

Mexico is perceived to be more corrupt than other OECD countries 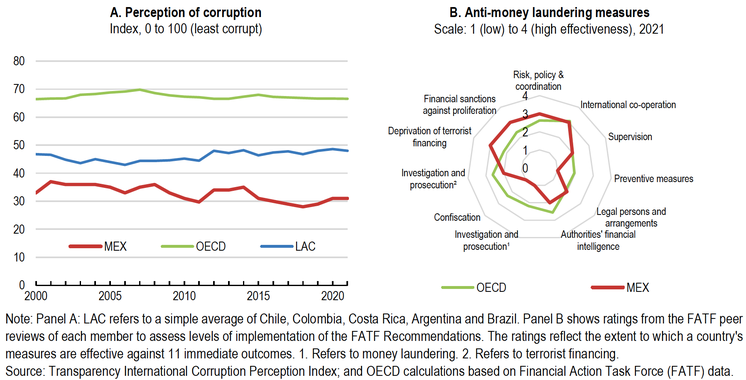 Poverty. Mexico's National Council for the Evaluation of Social Development Policy (CONEVAL) reported that 42 percent of Mexican residents were poor in 2018 and 44 percent were poor in 2020 due to pandemic disruptions.

Chiapas, Guerrero, and Oaxaca have the highest poverty rates among Mexican states 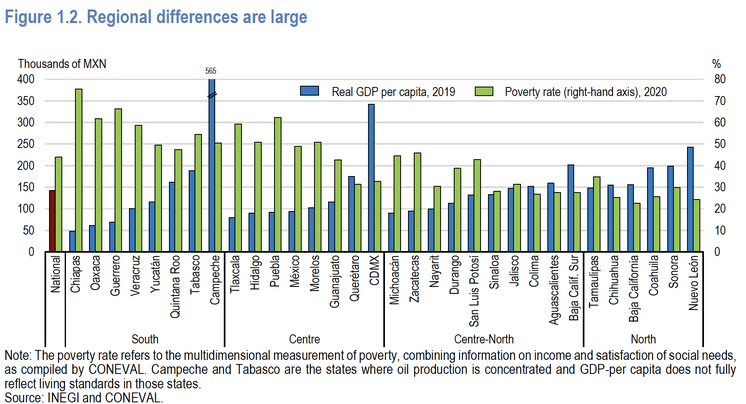 Mexico’s minimum wage rose 50 percent in real terms between 2019 and 2021, and is expected to continue to increase through 2024 so that a worker earning the minimum wage can purchase two basic consumption baskets, up from 1.3 baskets now.

The conditional cash transfer program, Progresa when launched in 1997 and renamed Oportunidadas in 2002, made payments to poor mothers with children who kept their children in school and took them for regular health care checks. AMLO replaced Progresa-Oportunidadas with three education assistance programs. The program for poor families with children under 15, Programa de Becas de Educación Básica para el Bienestar Benito Juárez, makes a flat payment per family rather than a payment per child and does not require regular school attendance and health checks.

The IMF urged the Mexican government to spend more on anti-poverty programs and increase the efficiency of social spending by creating a single registry of program participants to reduce overlaps between anti-poverty programs. The OECD found 123 federal social programs in 2021, another 1,444 operated by the 32 state governments, and 6,829 run by the 2,454 municipal governments, and urged a single registry of all beneficiaries of all social programs, as was done in Brazil. Federal transfers provide 92 percent of the revenue of state and municipal governments.

Most analyses conclude that Mexico has failed to achieve its economic potential for three major reasons. First, NAFTA, USMCA and other free-trade agreements opened the door to the investment that could speed growth, but crime, corruption, and policy uncertainty limited the benefits of North American economic integration. There are many success stories, including autos, aerospace, and agriculture, but they collectively employ less than 10 percent of Mexican workers and have limited spillovers.

Second, AMLO increased uncertainty with policy zig-zags in many areas, from anti-poverty programs to whether major projects could be completed. Even if investors hurt by particular policy decisions are appeased, as with Constellation’s shift of a Corona brewery from Mexicali to southeastern Mexico, stopping an investment midstream deters other investment.

Third, AMLO has re-ignited a debate over the role of the state in the Mexican economy. The expropriation of foreign-owned oil companies in 1938 slowed foreign investment until NAFTA and the USMCA provided investment guarantees. AMLO wants to reverse market-friendly reforms in energy and electricity, sowing doubt about the viability of private investments made in the Mexican energy and electricity industries.

Most foreign investors are in Mexico for the long haul, including auto and auto parts plants that take years to construct and are now integrated into complex cross-border supply chains. The danger for Mexico lies in other sectors that could shorten their time horizons for expected investment returns. For example, instead of investing to develop varieties of fruits and vegetables that are optimized for Mexico and will not pay off for a decade or more, agribusiness firms could focus on investments that have quicker payoffs but contribute less to the development of an expanding Mexican export agriculture.

The failure of Mexico to achieve its economic potential echoes the aphorism that Brazil is the country of the future, and always will be due to its failure to adopt and implement the policies required for sustained growth.