Texas has 254 counties, and the state is divided into 10 agricultural districts, some with north and south sub-districts. The largest counties by area are in the state’s southwest; Brewster with 6,200 square miles is the largest, followed by Pecos with 4,800 square miles.

Texas has 254 counties and 10 agricultural districts

The leading commodities by sales were cattle and calves worth $12.3 billion in 2017 or half of total farm sales, followed by broiler chickens worth $1.9 billion and milk worth $2.1 billion. The leading crops were cotton worth $2.6 billion from five million acres, corn worth $1.1 billion from 2.2 million acres, nursery products worth $0.8 billion, sorghum worth $0.5 billion, and fruits and vegetables worth $0.6 billion.

Estimates prepared for the National Center for Farmworker Health report a higher number of workers than the Census of Agriculture data, even though the COA double counts workers employed on two or more farms. The NCFH estimated 71,467 crop workers and 124,267 livestock workers, for a total of 195,734 or 35 percent more than the COA’s 144,000. Some of this gap may reflect NCFH efforts to count workers who are brought to farms by FLCs and other nonfarm employers.

Hidalgo county had the most farm workers in Texas, and is primarily a crop county

An alternative source of farm labor data is the Quarterly Census of Employment and Wages, which reports the employment and earnings of workers who are employed on farms that must participate in unemployment insurance. Texas requires agricultural employers who hire at least three employees for at least an hour a day for 20 weeks in a calendar year, who pay at least $6,250 in cash wages in a calendar quarter, and/or who employ a seasonal worker in a truck farm, orchard, or vineyard, and/or who employ a migrant or seasonal worker, to enroll in the state’s UI system and to pay taxes on the wages earned by employees. The wages paid to H-2A workers are exempt from UI taxes.

Bowen National Research used 2010 UI data to estimate that Texas had 34,520 migrant and seasonal farm workers in 49 counties in 2010, including a third in the High Plains or the Texas Panhandle area in the northwestern part of the state. Another 15 percent of MSFWs were in south Texas counties, 15 percent were in west Texas, and the remaining 40 percent were in the state’s other counties. Of these 34,520 MSFWs, 18,300 were reported and 16,200 were “estimated” by Bowen. The most important crops grown in the regions studied by Bowen were cotton in the High Plains and west Texas and sorghum for grain in south Texas.

The purpose of the Bowen report was to survey the availability of and need for MSFW housing. Bowen estimated that there was housing for 2,500 of the 31,000 low-income MSFWs in Texas, leaving a housing gap for 28,500 MSFWs, many of whom likely paid a high share of their income in rent.

UI-covered employment in Texas agriculture declined 10 percent between 2000 and 2020 to an average 57,300. However, crop employment declined by over 20 percent, and crop support employment fell by over 40 percent, while livestock employment increased by 25 percent. The decline in crop employment and the rise in cattle employment likely reflects mechanization in crop production and fewer and larger livestock operations that depend on hired workers.

Direct-hire employment in livestock rose by 25 percent and employment in animal support services rose by 45 percent. There were 15 full-time equivalent jobs on animal farms for each FTE job in animal support in 2020, down from 18 to one in 2001. By contrast, the ratio of direct-hire crop to crop support rose to 2.3 by 2020, that is, there were 2.3 direct-hire workers for each crop support worker.

Average employment in Texas ag declined 10 percent since 2000, but rose for livestock and fell in crops 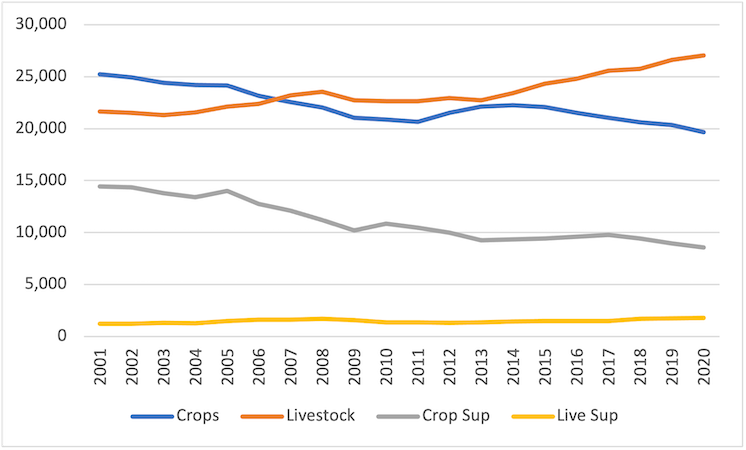 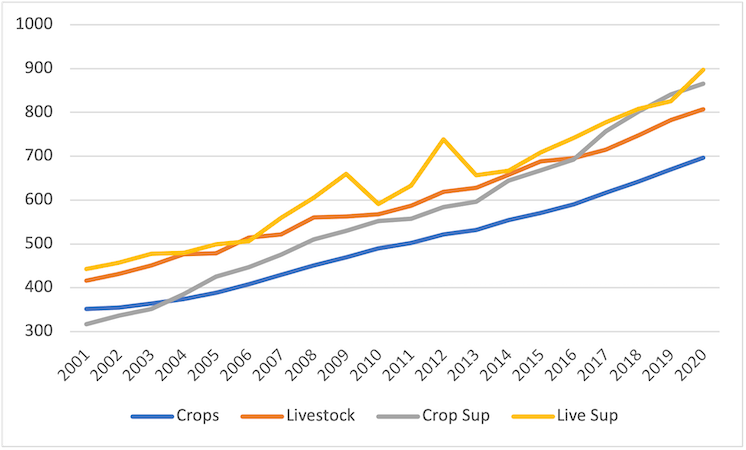 Fruits and Vegetables. The leading fruits by sales were grapefruit worth $65 million in 2019 and oranges and wine grapes, each worth about $23 million. Texas vegetable acreage has been shrinking; there were 50,000 acres harvested in 2019 that produced fresh and processing vegetables worth less than $200 million. Total fruit and vegetable sales were almost $350 million in 2017.

Texas has an elected agriculture commissioner, currently Sid Miller, who announced plans to run for a third term in 2022. Miller is a Trump supporter who criticized Governor Greg Abbott for implementing restrictions to prevent the spread of COVID-19 in 2020.

Texas A&M. 2016. Facts about Texas and US Agriculture.