OR has a stable number of farms and rising farm sales

In Oregon, about 70 percent of farm sales are from crops, including $1.2 billion worth of greenhouse and nursery commodities and almost $569 million worth of hay in 2020. 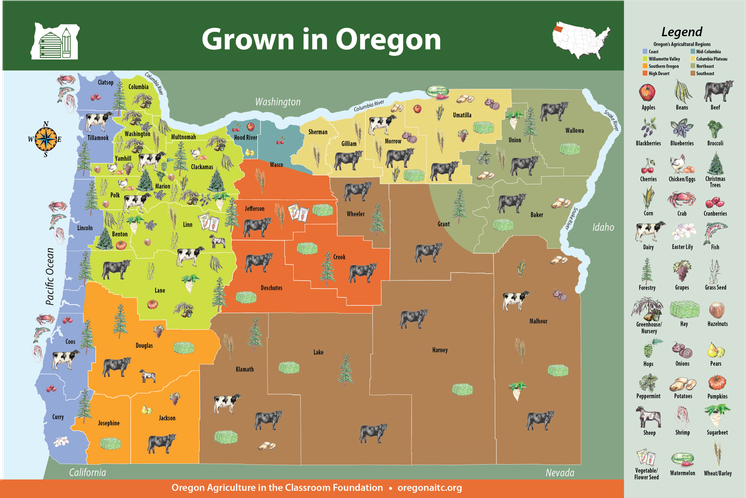 Data on individual Oregon crops are obscured by the fact that nursery crops, grass seed and hops and spearmint oil are often grouped with the miscellaneous crops that account for a third of the state’s farm sales.

Greenhouse, nursery, and other miscellaneous crops account for a third of OR’s $5 billion farm sales

Leading labor-intensive fruits included cherries worth $133 million in 2020, blueberries worth $120 million, and apples worth $39 million. Bearing cherry acreage has been stable at about 12,000 acres, but yields have been rising toward an average five tons an acre.

Cherries are the most valuable labor-intensive fruit

Labor. Some 10,300 OR farms, about a quarter of all farms, reported $1 billion in expenses for hired farm labor in the 2017 COA. Fewer than 1,700 OR farms had labor expenses of $100,000 or more, and they accounted for 90 percent of the state’s farm labor expenses. Some 4,600 farms (often the same farms with direct hire expenses) reported $170 million for contract labor expenses, for a total of almost $1.2 billion, making labor costs a quarter of the state’s farm sales.

Census county data (Table 7) report that 10,300 farms hired 86,250 workers; workers who were employed on two farms were counted twice. As with farm labor expenses, hired farm workers were concentrated on the largest farms. The 1,500 farms that hired 10 or more workers employed 62,000 or 72 percent of all directly hired workers. Most of the workers who were hired directly were employed on the responding farm for less than 150 days, some 59,000 or almost 70 percent were seasonal hires.

Four counties accounted for over 40 percent of Oregon’s hired workers, led by over 13,000 workers hired in Marion county and 7,000 to 8,000 each in Clackamas, Hood River, and Wasco counties.

Oregon requires almost all farm employers to participate in unemployment insurance. UI data find half as many employers as the COA, 4,600 establishments in 2020, an average 53,000 workers, and $2.1 billion in wages paid or an average $770 a week. The UI average employment is akin to year-round job slots; there are often two workers per year-round job, so OR could have over 100,000 unique farm workers. UI farm wages are significantly higher than COA farm labor expenses. 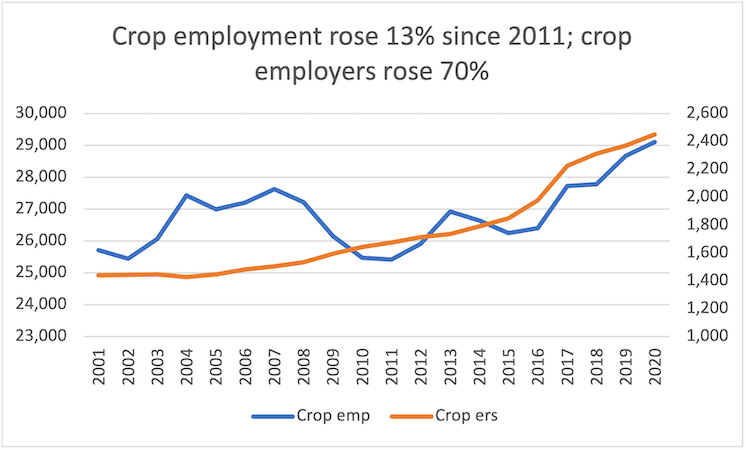 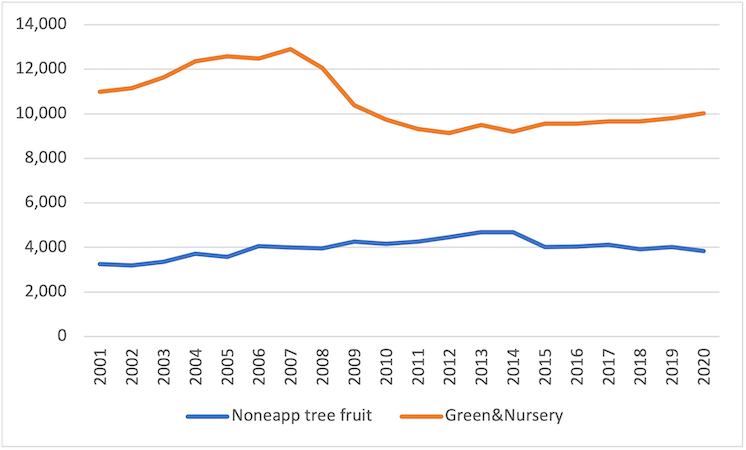 Greenhouse and nursery farms pay higher wages than non-apple tree fruit farms, an average 50 percent more or $775 versus $520 a week in 2020. The greenhouse and nursery wage premium peaked at 65 percent over non-apple tree fruit in 2003-04, and was only 35 percent in 2016. Average weekly wages represent total wages paid by employers in a particular commodity divided by average employment in that commodity, and may not reflect the peak hourly piece rate earnings of harvest workers. 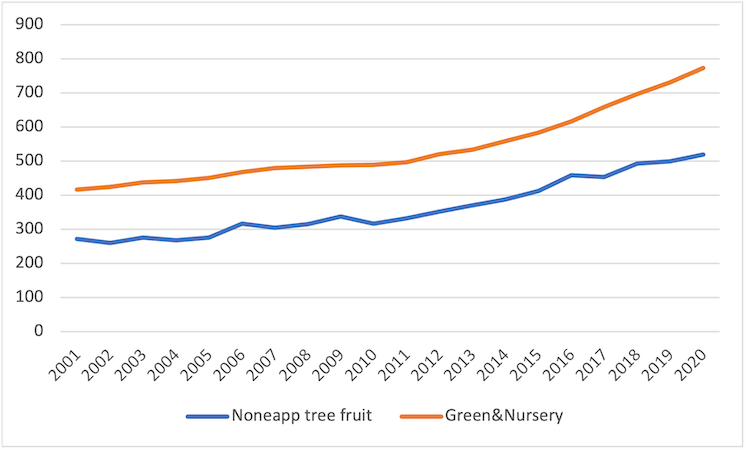 OR and WA are important producers of cherries and pears. A comparison of average weekly wages in this sector over the past two decades shows that wages were higher in Oregon between 2001 and 2003, after which wages in Washington were higher, peaking in 2014 when WA farm wages were almost 20 percent higher than OR farm wages. In 2020, average WA cherry and pear weekly wages of $585 were almost 15 percent higher than OR’s $520.