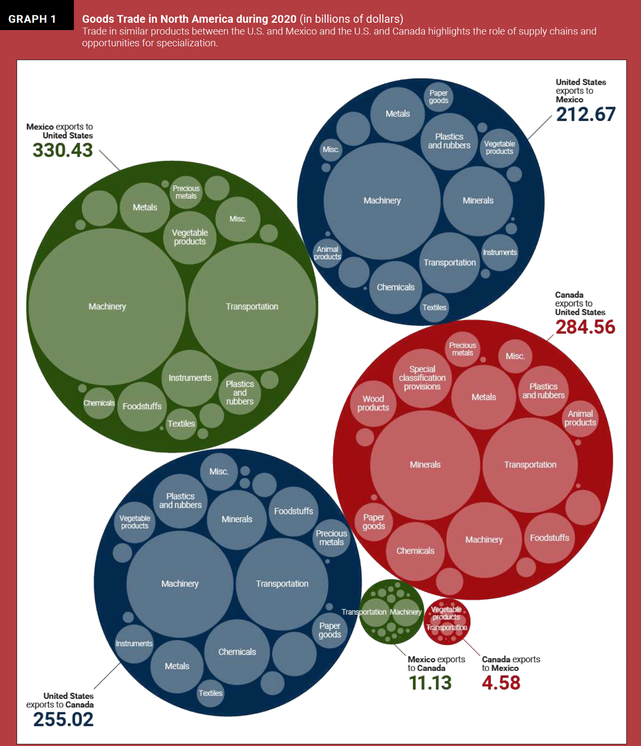 Machinery and transportation loom large in trade between Canada, Mexico, and the US, reflecting the cross-border supply chains that move parts over borders that are eventually assembled into vehicles and other goods and exported after final assembly. Canada and Mexico opposed a provision that was included in President Biden’s Build Back Better plan to provide the full $12,500 tax credit to US buyers of electric vehicles only if the car was built by unionized workers and had US-made batteries, arguing that such a US-preference violated USMCA free-trade provisions and would disrupt the auto industry.

Canada and Mexico send three-fourths of their exports to the US, while the US sends its exports to more countries. However, 16 percent of US exports go to Canada, and another 16 percent go to Mexico in 2021, twice the eight percent that go to China. 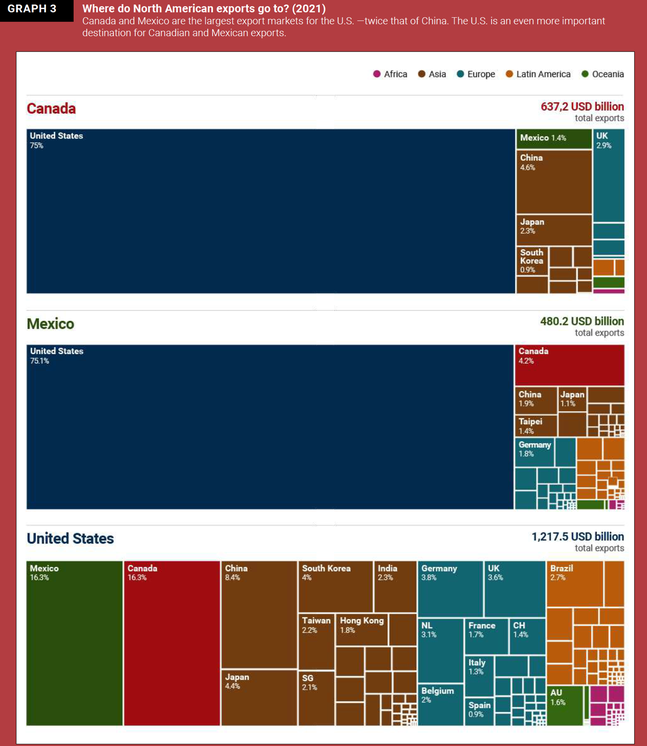 Mexico. Free trade was expected to speed economic and job growth in Mexico. Mexico benefitted from freer trade and investment, but challenges that range from lagging infrastructure, low educational attainment, and insecurity have not yielded all of the economic benefits that were expected.

The share of manufacturing in Mexican GDP has been declining, although not as fast as in Canada and the US. In light of the supply chain disruptions in Asia that were exposed during the covid pandemic, the post-covid economy may see some manufacturing shift from China to Mexico.

The manufacturing share of Mexican GDP has fallen below 20% 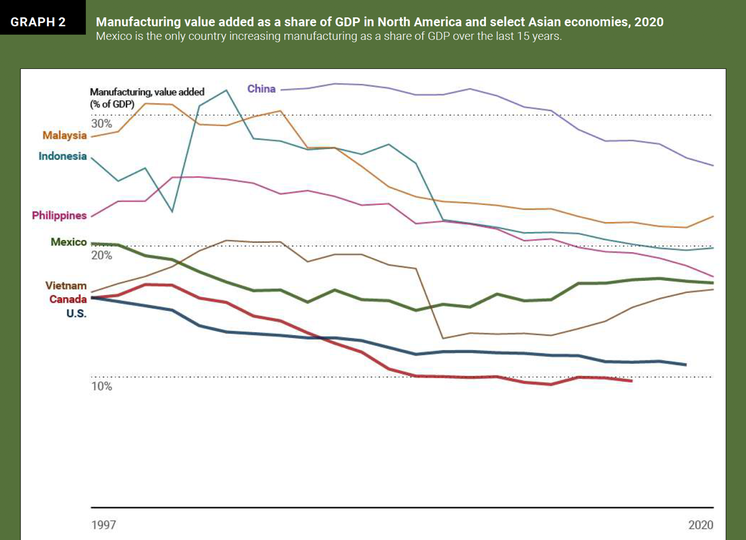 Mexico remains the 50th most competitive economy despite NAFTA and USMCA 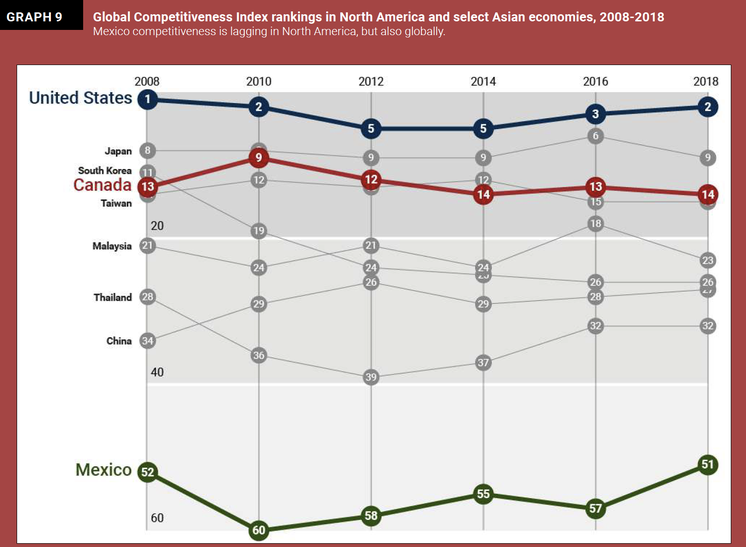 Despite rising educational levels in Mexico, from an average 6.5 years in 1990 to almost 10 years by 2020, median wages did not increase over the past three decades. Real median wages rose in Mexico in the early 1990s, fell sharply after the 1995 financial crisis, and have since stagnated.

Despite better educated workers, real median wages have not increased 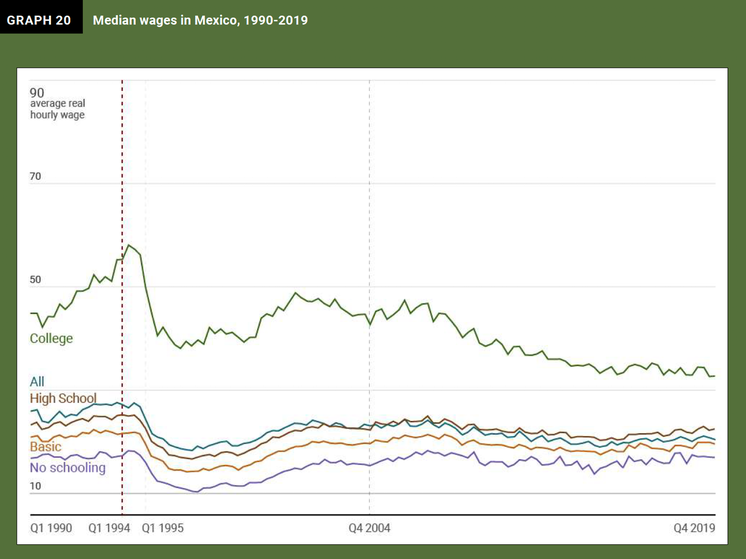 Mexican economists list several reasons for stagnant real wages, including the fact that less than half of Mexican workers are in formal jobs, meaning that their employers have enrolled them in the IMSS system, which requires employers to pay taxes of 25 to 30 percent of wages to provide a wide range of benefits, from child and health care to bonuses and pensions. IMSS is often unable to deliver promised services efficiently, which means that both employers and covered employees value IMSS services at much less than their cost. IMSS deficiencies contribute to informal employment, as employers seek to evade IMSS payroll taxes.

About 55 percent of Mexican workers, and 90 percent of Mexican firms, are informal, that is, not enrolled in IMSS or similar systems for public employees. The Mexican government has developed IMSS-like systems that provide health and other services at no cost to employers or workers, which encourages continued informality.

USMCA seeks to raise the wages of workers employed in Mexican firms that participate in North American trade, which could paradoxically reduce wage growth for most Mexican workers. Independent unions and government efforts to push up wages in Mexican firms that export could benefit the two to four million workers who are employed in export-oriented manufacturing firms, and up to 750,000 Mexican farm workers who are employed on farms that export fruits and vegetables, but not Mexico’s other 50 million+ workers.

Why have Mexican wages stagnated at low levels? The major reason is the lack of productivity growth in Mexico, which has stagnated since 1990. Productivity will have to increase in order for real wages to rise. 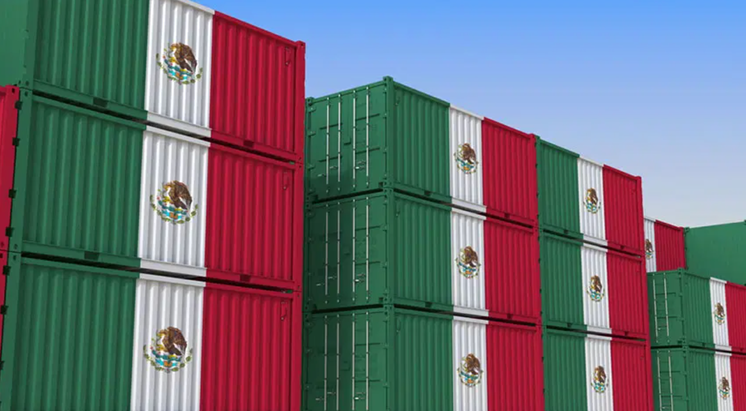