Grapes are a fruit that produces clusters of dozens of individual berries. Most grapes are from the varieties of Vitis vinifera native to the Mediterranean region. The FAO estimates that over 70 percent of the world’s grapes are used to make wine, a quarter eaten as fresh fruit, and the rest dried into raisins.

The acreage and value of raisin grapes have been declining

Production. Almost all US raisin grape vineyards are in California, where production has been declining. California produced a record 400,000 tons of raisins from 280,000 acres in 2000, a third of the world's supply. Grower prices dropped to $400 a ton in 2002, below the average $600 a ton cost of production. As US raisin production declined, Turkey surpassed the US as the world’s leading producer of raisins in 2016-17. The US had 138,000 acres of raisin grapes in 2021, less than half the acreage of 2000. 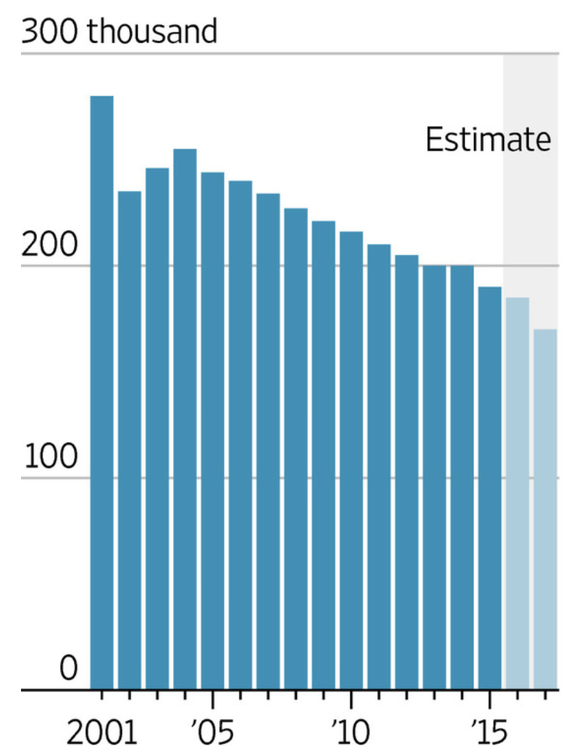 With consumer demand for raisins relatively fixed or inelastic, the RAC’s action created two markets for raisins, a high-priced retail raisin market and a low-priced food ingredient market. Farmers received a high price for their “free tonnage” and a lower price for raisins from the set-aside reserve, and the blended price increased the total revenue of raisin growers and kept some growers producing raisins. The US Supreme Court in 2015 declared the raisin-reserve system unconstitutional, accelerating the decline in US raisin production.

Over 80 percent of raisin grapes are the Thompson Seedless variety. Farmers in the past waited until a month before the harvest to decide whether to harvest their grapes for wine or raisins. If harvested for raisins, workers wielding knives cut bunches of green grapes into plastic tubs and dumped full tubs with about 25 pounds of grape bunches onto paper trays that are two by three feet and laid between the rows. The green grapes dry into raisins in about two weeks.

Labor. The harvest labor issue for grape growers is finding enough workers when the sugar levels in their grapes reach at least 20 percent (the percentage of sugar in grapes is called brix, so 20 brix means that the grape juice is 20 percent sugar). The raisin harvest is a race between sugar and rain because, the later raisins are harvested and placed on paper trays to dry into raisins in vineyards, the higher the risk that the drying grapes could be damaged by early rains. On the other hand, harvesting grapes too soon can mean yields and the quality of raisins are lower.

Industry leaders talked of the need to mobilize 60,000 for the six-week harvest in the 1990s. Since the vineyards do not require much labor except for pruning in winter and harvesting in summer, most growers turn to labor contractors to obtain harvest workers. Surveys in the 1990s found that 60 to 70 percent of raisin growers used labor contractors to obtain harvest workers.

The workers who harvest raisin grapes are mostly Mexican-born immigrants who rely on several seasonal jobs to support themselves. A late 1990s survey of raisin harvesters found that 94 percent were born in Mexico, they were a median 28 years old, had five years of schooling, and were in the US less than a decade before being interviewed; 60 percent to 70 percent were unauthorized. Most filled 40 to 50 trays an hour and earned more than the state’s minimum wage. At current piece rate wages of $0.35 to $0.40 a tray, workers harvesting 40 to 50 trays an hour would earn slightly more than California’s minimum wage of $15 an hour in 2022. 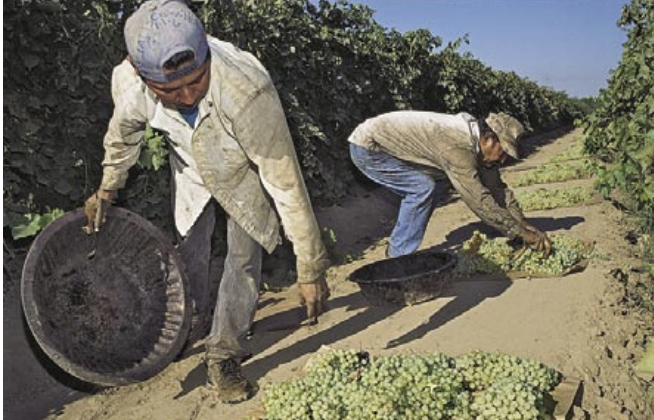 Raisins are sold to packers, including two cooperatives, where they are cleaned, stored, rinsed, and packaged. The Sun-Maid cooperative, founded in 1912, packs 40 percent of US raisins and launched the dancing raisins heard-it-through-the grapevine commercial in the 1980s. 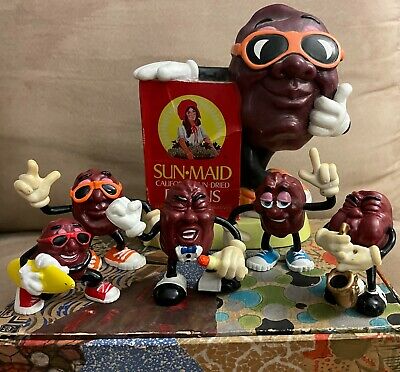 Mechanization. Raisin grapes can be harvested mechanically by drying them while they still on the vine, the dried-on-the-vine (DOV) method. DOV production requires growers to plant varieties that reach optimal sugar levels earlier, such as Fiesta and Selma Pete rather than Thompson Seedless, so that the canes holding bunches of green grapes can be cut in early August to allow the grapes to begin to dry into raisins while they are still hanging in bunches on the vine. When the grapes turn into raisins, they are harvested by wine-grape harvesters that use rotating fingers to dislodge the raisins and convey them to bins for transport to processors.

Almost 10 percent of California’s raisin grapes were harvested with DOV methods in 2021. The Sunpreme grape variety dries into raisins on the vine without the need to cut canes in winter, and is expected to dominate new plantings of raisin grapes. Sunpreme grapes are pruned by machine during the winter months.

Sunpreme vineyards have more vines per acre, since there is no need to leave space between the rows for drying grapes, and can utilize a smaller trellis because the wires do not need to support the canes that are cut to allow grapes to begin drying on the vine. Pruning can be done by machine, adding to cost savings. However, some Sunpreme raisins fall to the ground before the harvest, reducing yields, and Sunpreme raisins have a slightly different taste.

There is likely to be more mechanical harvesting of raisin grapes, but the major reason for less hand labor in raisin grapes is due to less US raisin production as almond orchards replace raisin vineyards. Almonds are pruned and harvested mechanically, and California’s almond acreage rose from less than 500,000 in 1990 to almost 1.5 million in 2022, making almonds California’s most valuable crop.

Harvesting Dried Grapes from the Vine 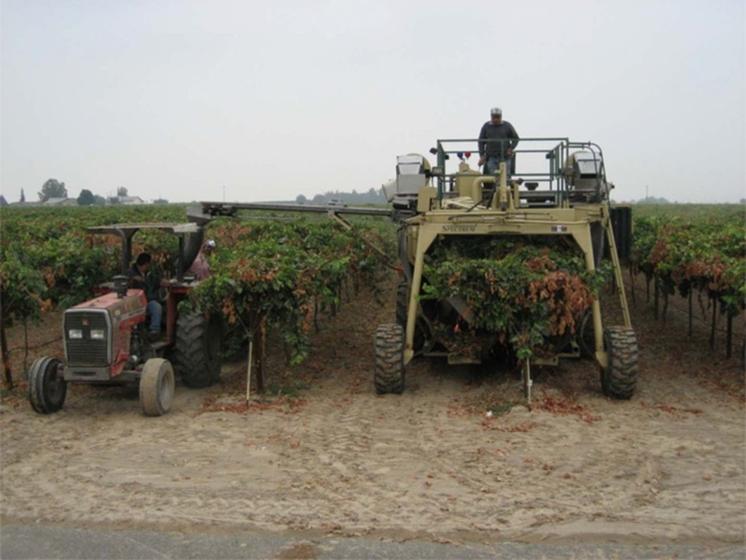 An intermediate labor-saving technique used on about 20 percent of raisin acreage is continuous tray harvesting. Canes are cut to stimulate fruit abscission or the loosening of the berries from the stem. Once the grape berries are partially dried, a wine grape harvester with rotating fingers shakes the partially dried grapes from the vine onto a conveyer belt that transports them to the next row, through a hopper, and onto a continuous paper tray as individual berries. A worker follows behind to spread the grapes onto the tray.

Cutting the canes allows the berries to be dislodged from the canes or vines more easily. The berries retain their cap stems, which reduces juice leakage that leads to stickiness. Partially dried grapes become raisins in a few days, after which the paper tray is picked up by machine and the raisins are conveyed into bins for transport to processors. Continuous tray harvesting requires less retrofitting and investment in vineyards. 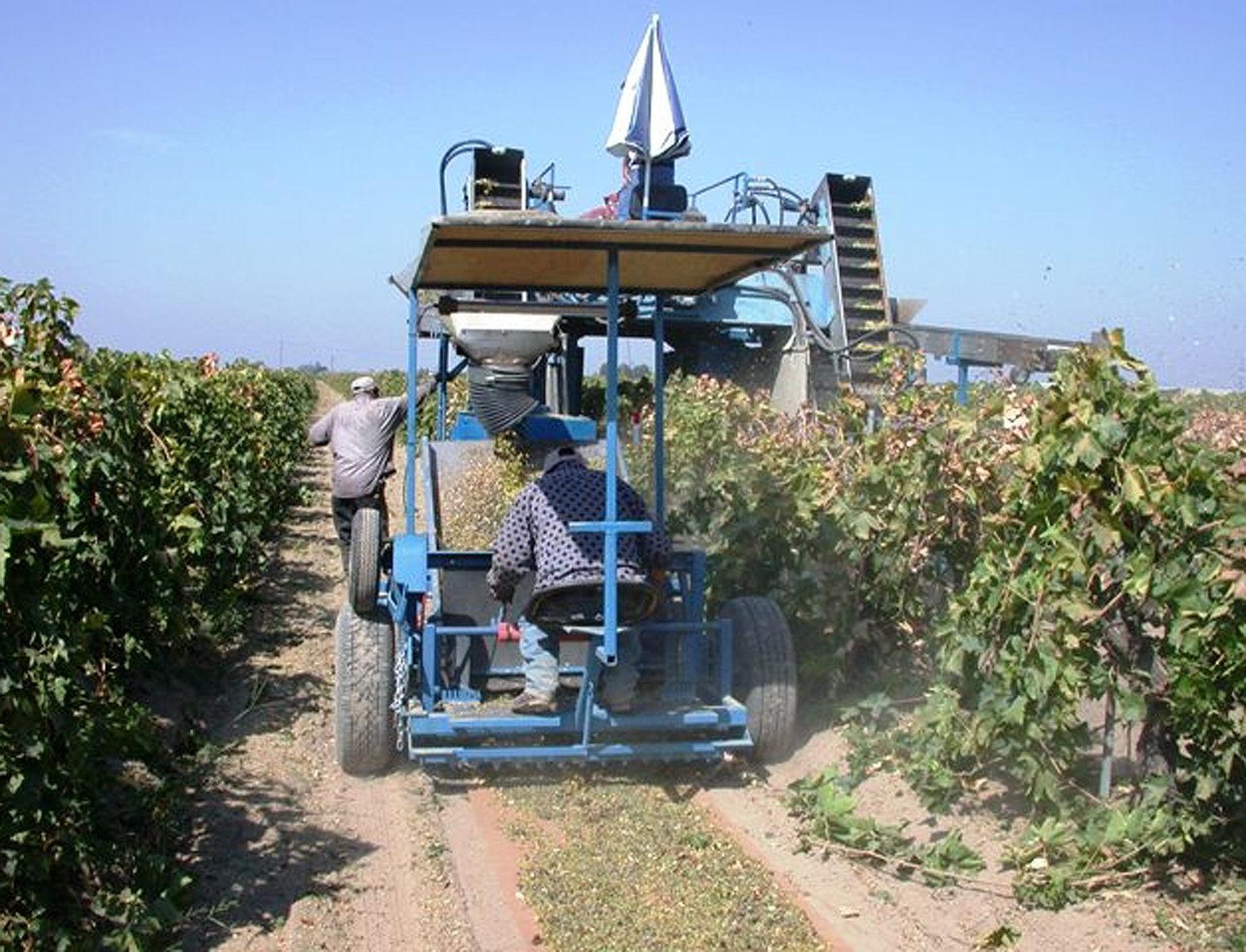 Complete DOV harvesting systems raise yields and reduce harvesting costs, but require more upfront investment. DOV vineyards have more vines per acre because there is no need to leave space between the rows for grapes to dry into raisins, so that yields can reach six tons of raisins per acre, three times the usual two tons an acre yield in conventional raisin vineyards.

Conventional vineyards can be replanted with early ripening grape varieties, and trellises can be strengthened so that machines do not damage grape vines that are trained to grow so that the canes are easier to cut. However, surveys of raisin growers find that most are in their 60s and 70s and have less than 50 acres of vineyard, making them reluctant to invest to retrofit their vineyards for machine harvesting.

Outlook. Raisin mechanization is occurring slowly. USDA reported that 42,400 acres of raisin grapes, 31 percent of the 136,000 acres in 2020, were harvested mechanically, including 26,000 acres that were harvested using the continuous tray method of cutting the canes and having a wine grape harvester knock the partially dried grapes unto a continuous paper tray to dry into raisins. Another 13,000 acres used an overhead trellis system that involves training the bunches of grapes to grow down from wires stretched between rows, allowing the canes to be cut and the raisins to dry into raisins on the vine so that a harvester passing underneath can harvest the dried raisins.

The alternatives to hand labor in US raisins are rising imports that substitute for US production, mechanization that saves labor, and the replacement of vineyards with almond orchards. There are few H-2A workers in raisins because most are produced near Fresno, California, a region with many farm workers and relatively low-cost housing.

Turkey produces a quarter of the world’s raisins

California Farmers Are Bulldozing Their Vineyards As Appetite for Raisins Shrivels. WSJ.