Grapes are a fruit that produces clusters of dozens of individual berries. Most grapes are from the varieties of Vitis vinifera native to the Mediterranean region. The FAO estimates that over 70 percent of the world’s grapes are used to make wine, a quarter eaten as fresh fruit, and the rest dried into raisins.

The acreage and value of table grapes have been increasing

The production and value of table grapes rose over the past two decades as growers planted new varieties that had higher yields. Seedless grapes, better color and flavor, and other changes doubled per capita consumption of fresh grapes from 3.5 pounds to over seven pounds per person between the 1970s and 2000s. Per capita consumption has been eight pounds per person in recent years.

Grapes in the past were sold by color and seeded versus seedless, but today are often sold by variety, as with apples. Three traditional varieties accounted for 34 percent of the 83,000 bearing acres reported to NASS in 2019: Flame Seedless, 18 percent, and Crimson Seedless and Red Globe, eight percent each. Two newer varieties accounted for 16 percent of acreage: Scarlet Royal and Autumn King, eight percent each. Varieties with the highest shares of non-bearing acres, indicating that acreage is expanding, include Allison, Cotton Candy, and Sugraone. 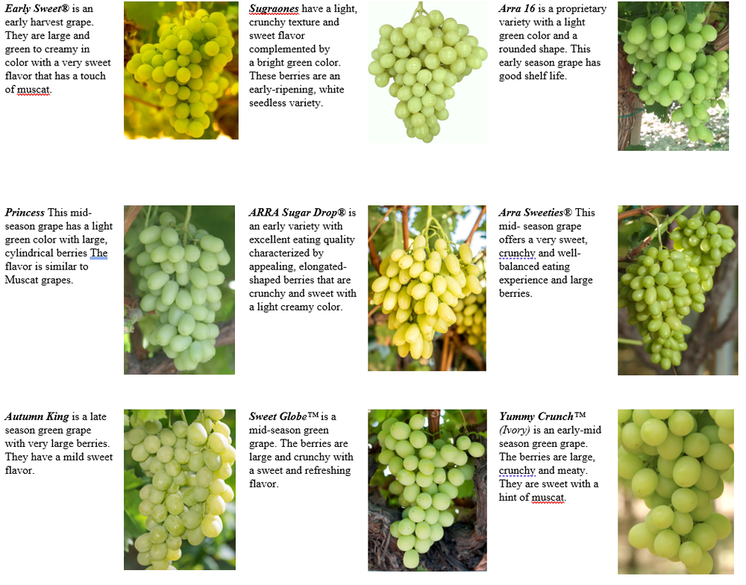 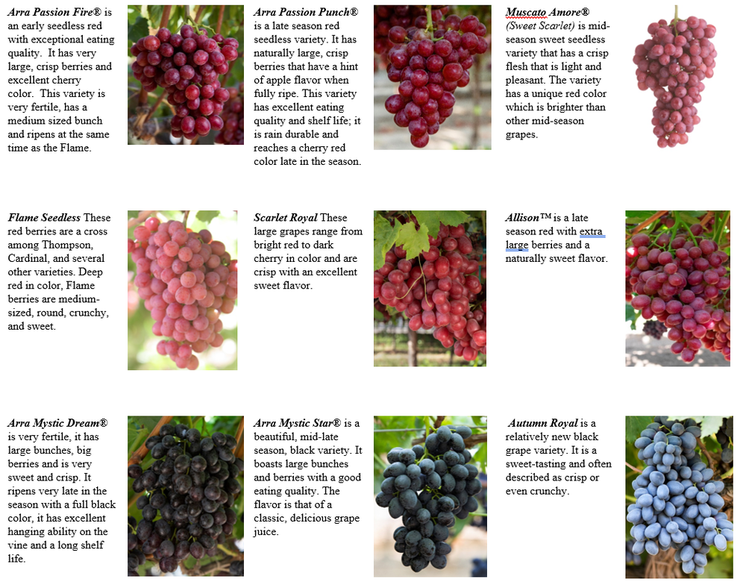 Some 80 varieties of table grapes are produced commercially. Plant breeders are developing varieties that increase yields with fewer inputs, appeal to consumers with more sugar, and have a long shelf life and better nutrition.

Table grapes are harvested when grapes have sufficient solids, generally when sugar levels reach 21 or 22 percent (Brix). Trios of workers include two pickers who cut bunches of grapes and place them into plastic bins or lugs and use a wheelbarrow to convey the full bins to a packer at the end of the row. The packer takes bunches of grapes from these field bins, trims them, and places them into the bags or clamshells in which grapes are sold, working on a portable table at the end of the row. Boxes of packed table grapes fill a 19-pound box and are cooled to 31.5F before being shipped to supermarkets.

Some harvesting crews use teams of two. Both workers beginning the day picking and, after six to eight wheelbarrow loads of grapes are picked, one of the pair begins to pack while the other continues to pick. The table grape workforce is local and diverse, dominated by Mexican-born workers but including Mexican Americans and US-born Filipinos. Many couples and extended families harvest table grapes.

FLCs often provide harvesting crews of 60, including 40 pickers and 20 packers, plus a crew supervisor and assistants to ensure that supplies are available, packed grapes are moved to coolers quickly, and toilets and shade structures are moved with the workers. Crew supervisors ensure that their crews are fully staffed and act as quality control inspectors. FLCs receive a commission of 30 percent to 40 percent above harvester wages to cover the cost of recruitment, payroll taxes, field sanitation, and record keeping.

The largest table grape grower, Sun Pacific, paid a $3.50 per box piece rate in 2020, so that trios picking and packing 12 cartons and hour would share earnings of $42, equivalent to $14 an hour or $1 more than the state’s then $13 minimum wage. Sun Pacific obtains picking crews from labor contractors, paying commissions of about 30 percent, so that the labor contractor would have received $3.50 plus 30 percent or $4.55 for each box packed. 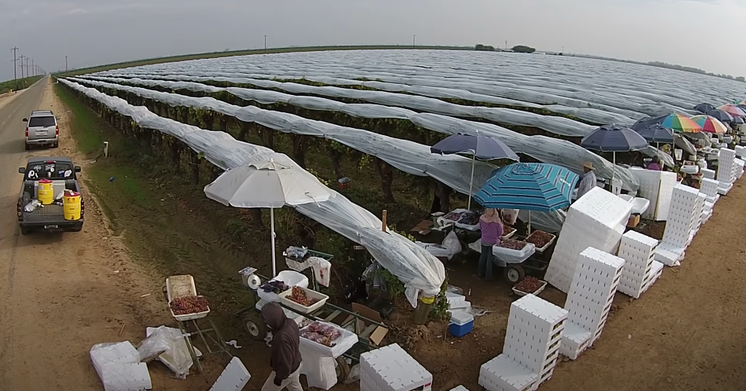 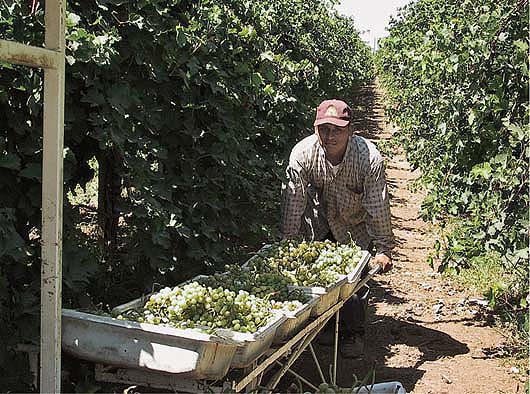 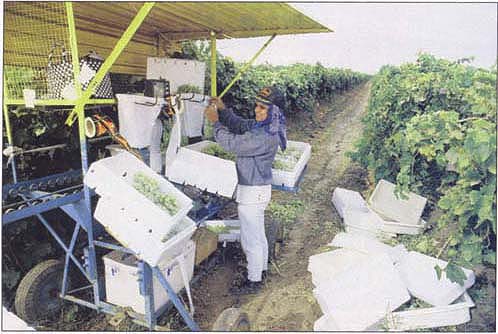 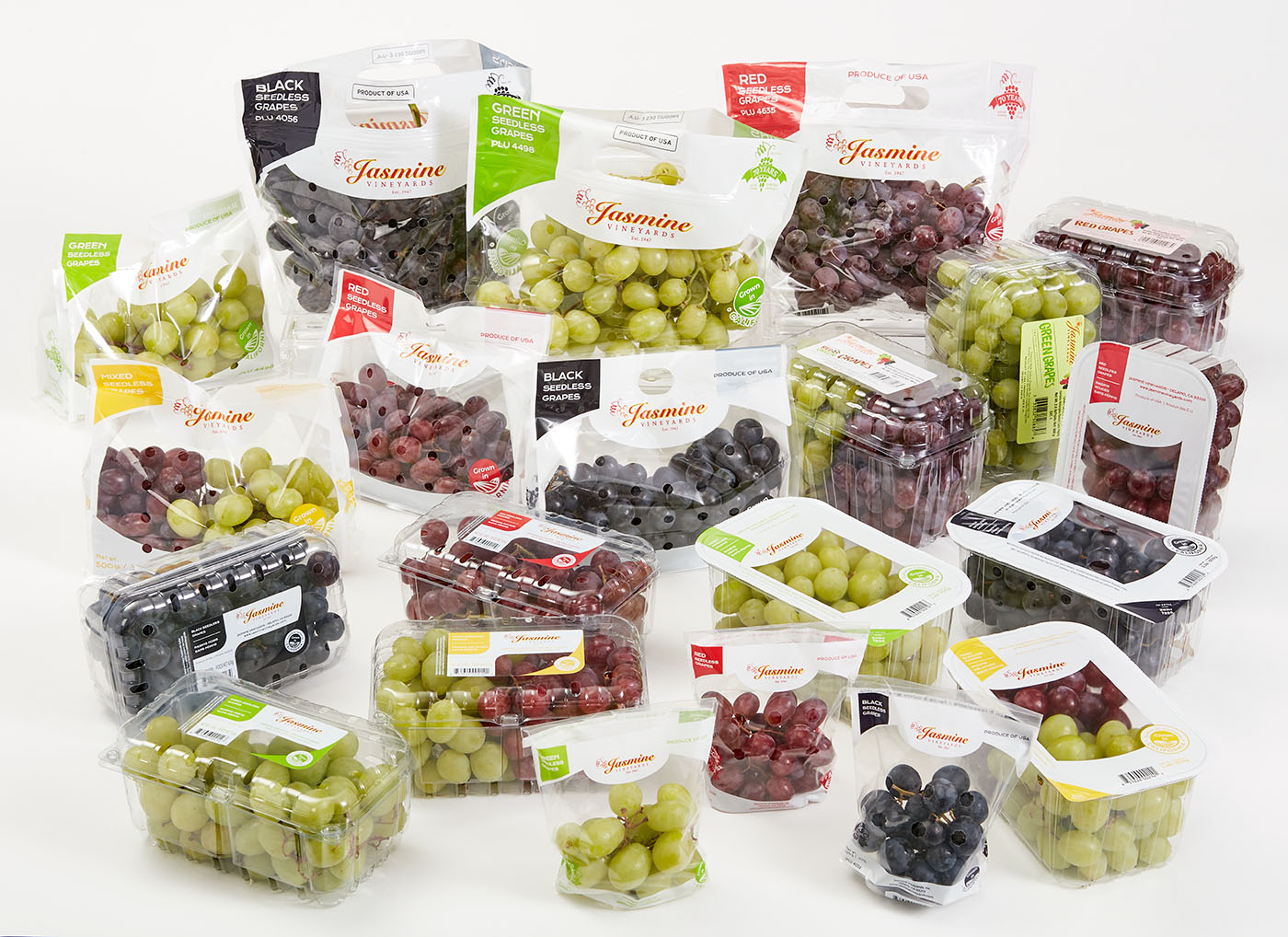 UCCE cost studies assume that that table grapes yield an average 1,600 19-pound boxes an acre and that growers receive $19 a box or $1 a pound or $30,400 an acre. Table grape growers incur production costs of about $16,000 an acre, including $8,000 for labor and packing, and expect gross revenues of $30,000 an acre. Rising labor costs are promoting the mechanization of pre-harvest pruning and thinning tasks.

Outlook. The major challenge in the table grape industry is to develop new varieties with higher yields and lower production costs that satisfy consumers. Newer varieties often save on pre-harvest labor because they require less pruning and thinning and generate higher yields.

There are no table grape harvesting machines in development, but harvesting aids are available. The Burro is a $10,000 robot that uses cameras and sensors to move six to eight lugs of table grapes from pickers to packers. Instead of workers using wheelbarrows to move the lugs that contain bunches of grapes, the Burro increases labor productivity by transporting harvested grapes from where they are picked to where they are packed.

Field tests find that one robot can serve six workers, so 10 robots are required for a crew of 60. Robots are most useful when workers are harvesting long rows and grapes are packed at a central station, allowing the robot to save worker time by moving grapes between harvesters and packers. Harvest crews with a robot packed 14 percent more boxes than non-robot crews in half rows in one test, 25 percent more in full rows, and over 40 percent more when there was a central packing station. Harvest workers also reported being less tired at the end of the day.

Robot developers want to capture data on grape yields as the machine moves along vineyard rows and add functions such as spraying and cluster thinning; some hope to develop an arm that could pick bunches of grapes and put them into tubs. Early users of robots emphasize that the device needs long-lasting batteries to function reliably under dusty field conditions while traveling over 100 miles a day. Burro had 90 machines in use in 2021, and expects to have 500+ in use in 2022.

The Burro robot conveys tubs of grapes to field packers 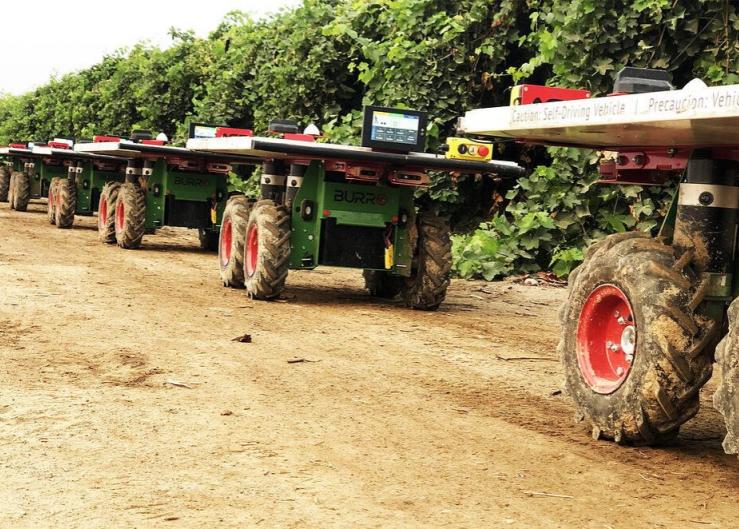 Some table grapes are put into cold storage and some grapes are packed in sheds, so harvest aids that convey harvested grapes from vineyards to packing sheds or cold storage could reduce labor needs. McFarland’s Dulcich farms 6,000 acres and has been packing table grapes in a shed since 2017 in order to improve food safety and to avoid “giving away grapes;” Dulcich believes that field packers often place more grapes than needed into one- or two-pound bags. Dulcich grapes are packed by hand and weighed, and full cartons are stacked mechanically.

Table grapes are grown in areas with relatively low-cost housing and many farm workers, so few table grape growers employ H-2A workers. Some California table grape growers also have operations in Sonora and other areas of Mexico, which would make it possible to bring workers who complete the harvest in Mexico to California via the H-2A program in the event of labor shortages.

Most table grape imports arrive in the US during the winter and spring, but imports from Mexico, which exported 21 million boxes to the US in 2020, are increasing during the April-July period, competing with the Coachella harvest. Most US table grape exports are sent abroad during the summer and fall months when US production peaks. Harvesting seasons are lengthening in the US and abroad, which may increase competition between US and foreign producers, especially as imports from Mexico compete with Coachella Valley production.

California dominates US table grape shipments between July and November