During the first two quarters of FY21, FL accounted for 14 percent of H-2A job certifications, CA 13 percent, GA 11 percent, WA eight percent, and NC seven percent; the top five states accounted for over half of all H-2A certifications. The NC Growers Association was the largest H-2A recruiter with almost 5,900 jobs certified, followed by CA’s Fresh Harvest with 3,800 jobs, CA’s Foothill with 3,600, and CA’s Elkhorn with 2,400 jobs. Eight of the top 10 employers in the first half of FY22 were FLCs.

CA, OR, and WA have about half of US farm worker employment and a fifth of H-2A job certifications, suggesting that the H-2A program is likely to grow fastest in the western states. H-2A workers are the highest share of farm workers in the southeastern states.

FLS. USDA’s FLS surveys only farm operators, while DOL’s QCEW obtains employment and earnings data only from nonfarm employers, including labor contractors and other nonfarm businesses that bring workers to farms. The FLS estimated 630,000 directly hired workers employed on US farms in April 2022. Over 80 percent of these directly hired workers were employed 150 or more days on the responding farm, and over 20 percent of US FLS farm worker employment was in California.

All hired workers (including supervisors) earned an average $17.22 an hour, up eight percent from April 2021. Farm employers report gross earnings and hours worked by type of worker so that USDA can calculate average hourly earnings. In April 2022, field workers earned an average $16.50 and livestock workers $15.82 an hour. Ag equipment operators and supervisors had higher hourly earnings. 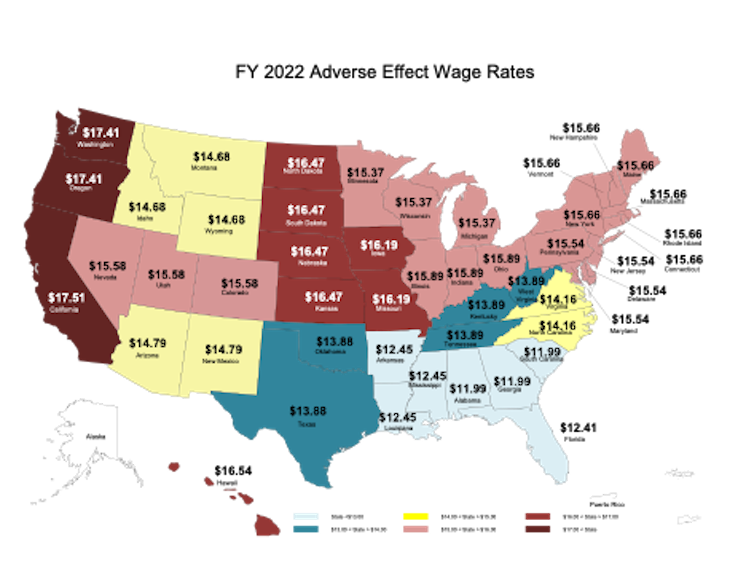 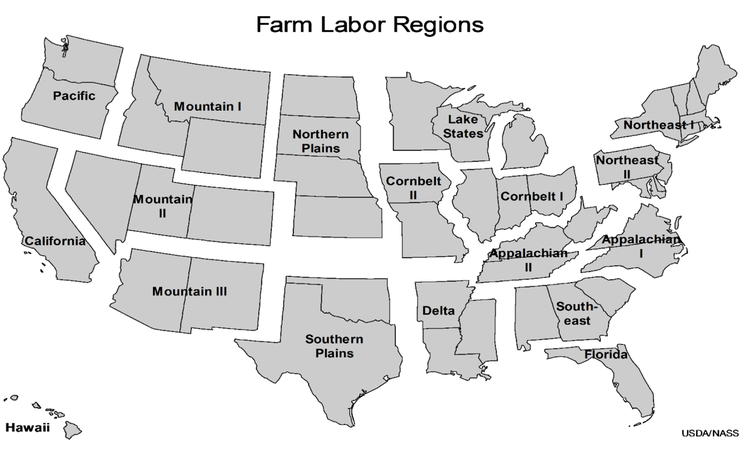 QCEW. DOL’s Quarterly Census of Employment and Wages obtains employment and earnings data from nonfarm employers who participate in unemployment insurance. Most states follow the 10/20 rule, meaning that employers who hire at least 10 workers during 20 weeks, or who pay at least $20,000 in wages in a quarter, must enroll in the UI system.

1976: The Unemployment Compensation Amendments of 1976 that becomes effective January 1, 1978, extends coverage to: agricultural labor for employers with 10 or more workers in 20 weeks or who paid $20,000 or more in cash wages in any calendar quarter; household workers of employers who paid $1,000 or more in any calendar quarter for such services; State and local governments with certain minor exceptions; and employees of nonprofit elementary and secondary schools.

DOL estimates that the average employment of wage and salary workers in US agriculture is 1.5 million. Some 1.2 million or 80 percent of these year-round equivalent jobs are covered by UI and included in QCEW data, while 300,000 are not. Another 700,000 self-employed farmers and unpaid family members are excluded from UI and the QCEW.

The QCEW includes 80% of the 1.5 million average employment in agriculture

108,000 agricultural establishments offered an average 1.2 million jobs and were included in QCEW data in fall 2019

QCEW data permit analysis of wage trends by commodity and area. Average weekly wages in US agriculture rose faster between 2016 and 2020 than between 2011 and 2015, and rose especially fast for farm labor contractors. Average weekly wages of FLC employees were much lower than weekly wages for workers hired directly by crop farmers, $580 versus $730 in 2020, but rose 10 percent between 2019 and 2020, versus a seven percent increase for directly hired crop workers. Livestock wages are more than 10 percent higher than crop wages, but increased at a slower pace. 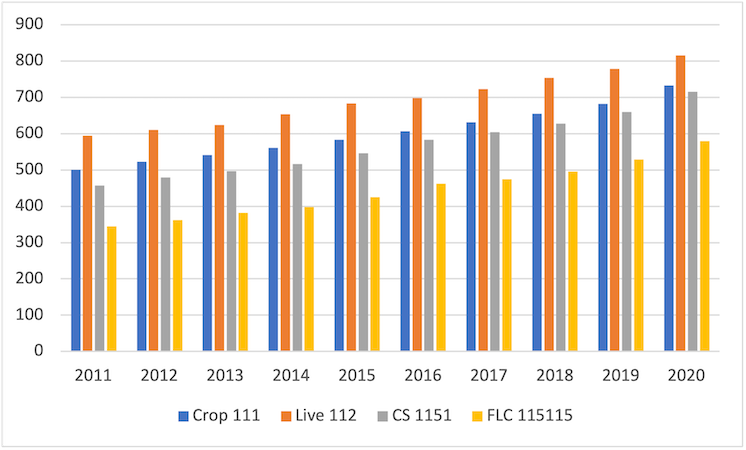 The four major commodities that employ most of the US farm workers who are hired directly by farmers are vegetables, apples, grapes, and strawberries (most of the workers who pick oranges are brought to farms by FLCs). Vegetable wages are at the top of the wage hierarchy, $775 a week in 2020, followed by grapes, $745 a week, while apples at $565 a week and strawberries at $630 were significantly lower. Strawberry wages jumped almost 10 percent between 2011 and 2012, and again between 2015 and 2016, but increased slower since 2016 than wages in the other commodities. 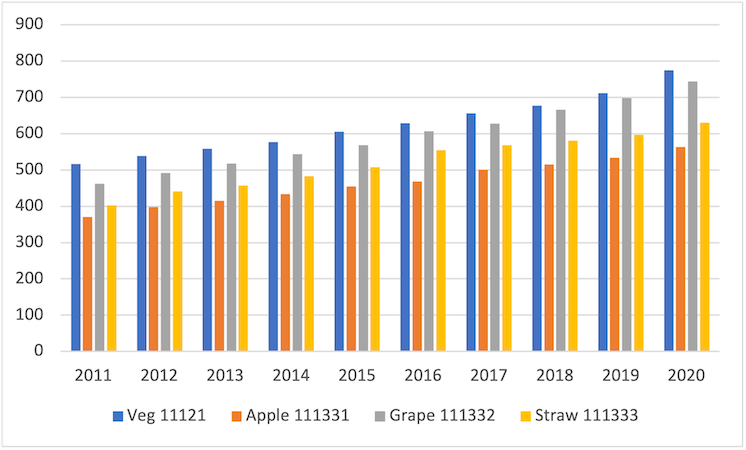 California mirrors the US, with livestock wages higher than crop wages, crop wages higher than crop support and FLC wages, but crop support and FLC wages rising faster since 2016. California FLC wages rose almost 10 percent between 2015 and 2016 and again between 2019 and 2020 to $585 a week, $200 less than the $800 a week paid to directly hired crop workers. 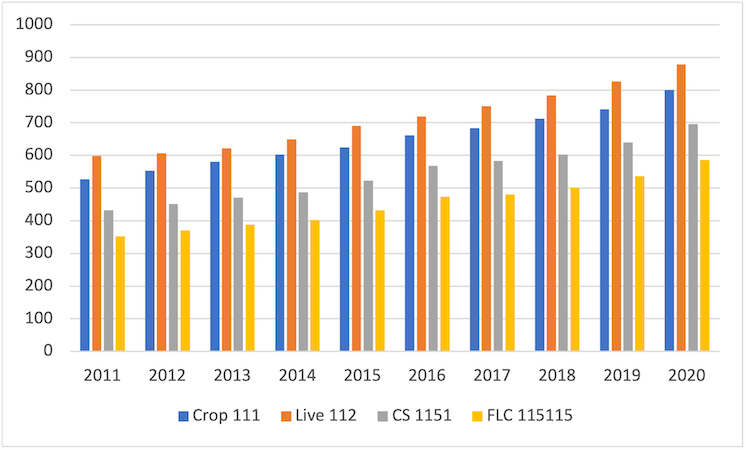 The four major commodities, vegetables, apples, grapes, and strawberries, had wage levels and changes in California that were similar to US wage trends. California’s directly hired vegetable workers have the highest weekly wages at $945, followed by grape workers, $790, strawberry workers, $640, and apple workers, $590 (CA has a small apple industry). California produces over 90 percent of US strawberries and almost all US grapes, so state trends mirror US trends in these commodities, viz, faster wage growth between 2011 and 2015 than from 2016 to 2020. 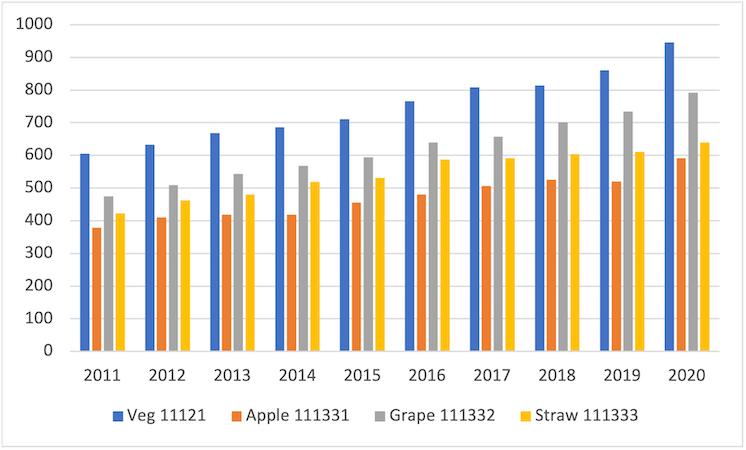 During several years, Florida FLC weekly wages fell, as in 2015-16 and again in 2017-18, perhaps reflecting the relatively few Florida FLCs in the state’s UI system (FL exempts H-2A workers from the UI program, but CA and WA do not). 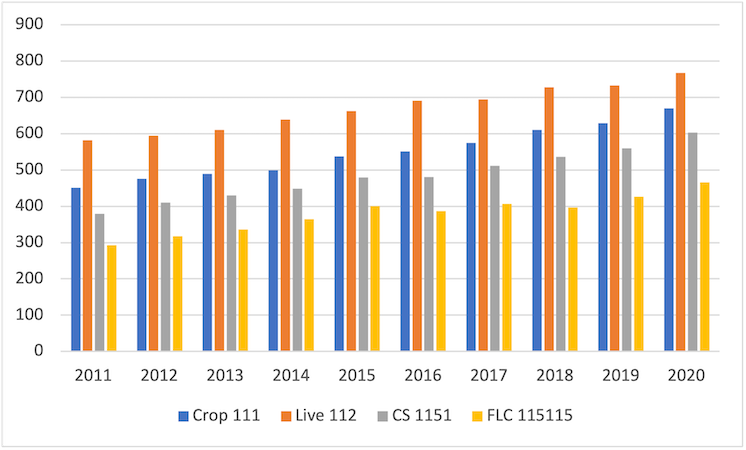 Directly hired orange workers had higher weekly wages than vegetable or strawberry workers, earning over $200 a week more. Workers employed directly by strawberry workers had the lowest weekly wages of $530 in 2020. It should be noted that Florida does not require employers of H-2A workers to pay UI taxes on H-2A wages, so Florida employment and wage data do not include all of the workers employed in vegetables, oranges, and strawberries. 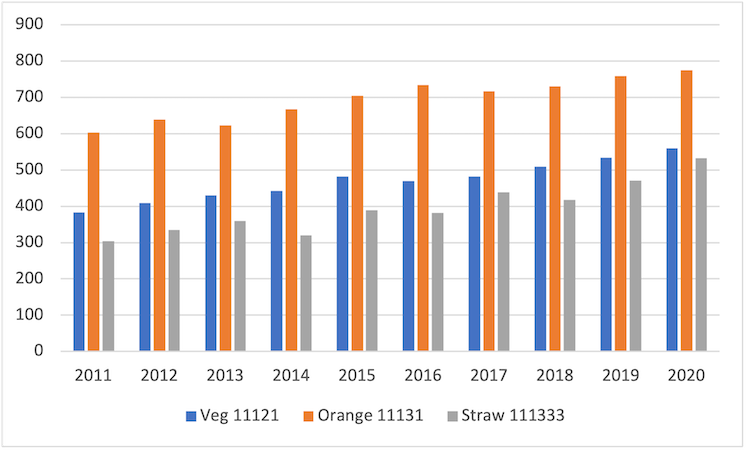 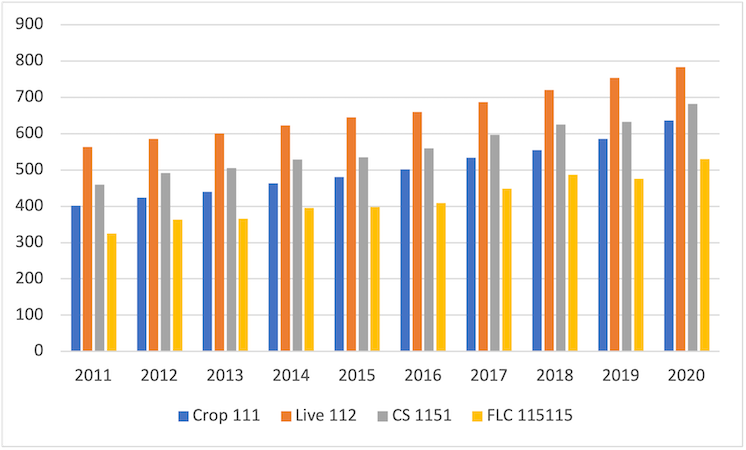 Washington has a relatively small vegetable sector, with average employment of about 5,000, a quarter of the average 20,000 employment in apple orchards. The average weekly wages of vegetable workers were significantly higher than the weekly wages of apple, grape, and other berry workers. The vegetable wage premium narrowed during the 2010s, in part due to significant wage jumps in apples and other berries between 2011 and 2015. 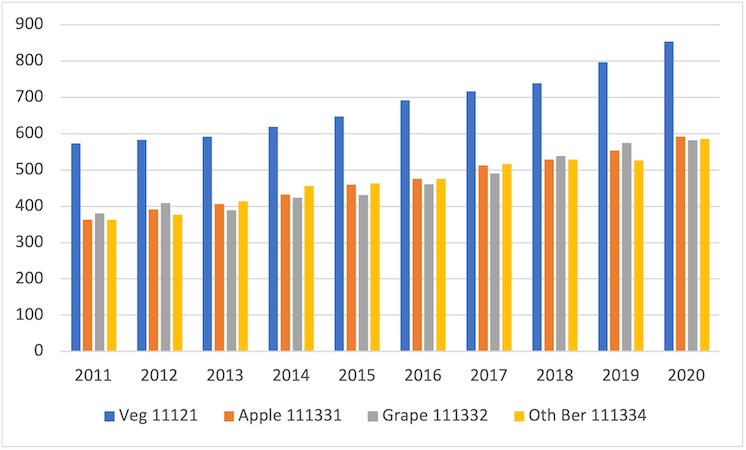