The 2030 Agenda for Sustainable Development established 17 goals and created indicators to measure progress to achieve these goals by 2030. Sustainable Development Goal 10 is to reduce inequality within and between countries, and Target 10.7 is to: "facilitate orderly, safe, regular and responsible migration and mobility of people, including through the implementation of planned and well-managed migration policies.” 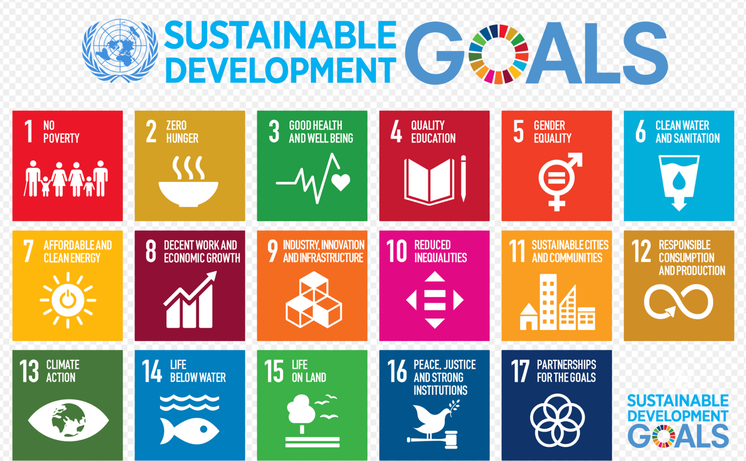 Almost two-thirds of the 280 million international migrants in 2020, some 170 million people, were in the labor forces of the countries where they lived. The International Migration Review Forum held in May 2022 called on governments to promote “fair labor conditions and decent work and uphold international labor standards.”

There are two indicators to measure progress toward achieving target 10.7, (1) recruitment costs borne by employees as a proportion of yearly income earned in country of destination, and (2) the number of countries that have implemented well-managed migration policies. A related Target 10.3 is to reduce to less than three percent the costs of remitting money over borders, with a special focus on remittance corridors where remittance costs are more than five percent of the amount transferred.

Recruitment 10.7.1. International labor recruitment is the process of finding workers in one country to be employed in another. Employers set most labor migration in motion by recruiting workers in other countries to fill vacant jobs. ILO conventions and many national laws require these employers to pay all worker expenses to work abroad. The ILO says that “no recruitment fees or related costs should be charged to, or otherwise borne by, workers or jobseekers.”

Foreign jobs that pay 10 to 20 times more than workers would earn at home often attract more workers than jobs, so worker-paid fees are one way to allocate limited work visas among potential migrant workers. Requiring employers to pay all recruitment costs means that workers capture the entire rent or difference in wages between the sending and the receiving country. 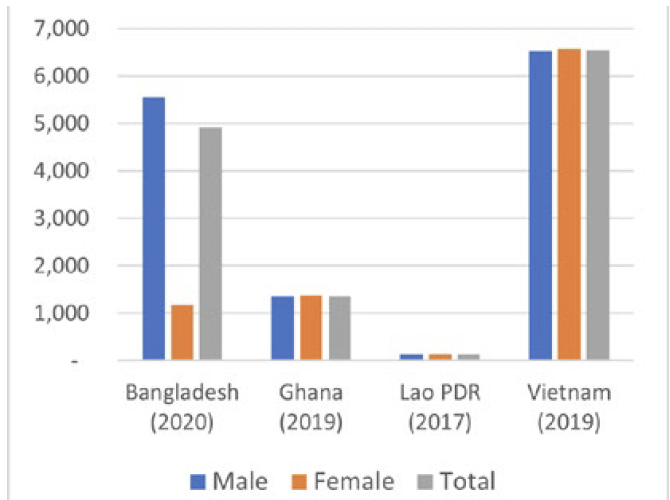 The Vietnamese migrants went to high-wage destinations including Japan and Korea, so their recruitment cost payments represented about six months of foreign work at foreign wages of $1,000 a month. The Bangladeshi men earned less in Gulf oil exporters, $200 or $300 a month, so they worked up to 18 months abroad to repay their recruitment expenses. 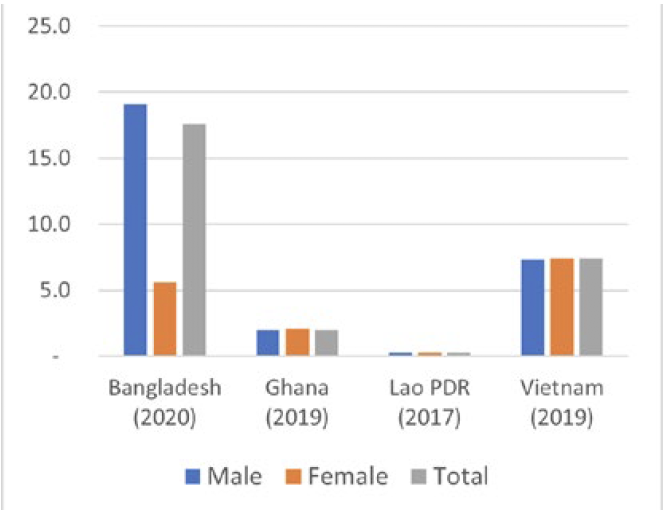 Singapore was the highest-cost destination for Bangladeshi migrants but migrants in Singapore repaid their recruitment costs fastest (USD cost on left Y-axis, months of foreign earnings on right Y-axis) 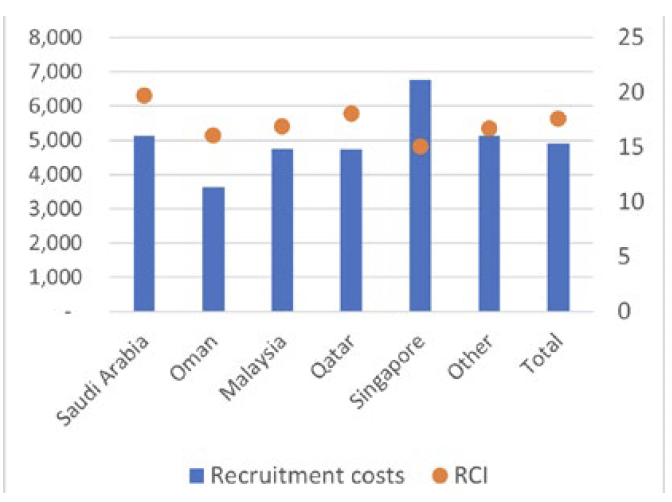 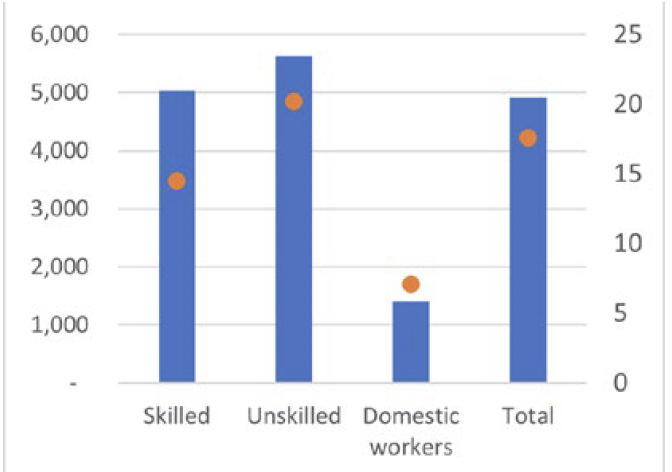 The SDG goal is to have national governments incorporate recruitment cost questions into their labor force or migration surveys. Some governments interview departing and returning workers because monthly or quarterly household surveys do not find many migrants. The SDG recommends that countries collect worker-paid cost data from at least 1,000 migrants before publishing the data.

Governments provide yes-no responses to 30 questions that ask whether they have policies covering particular issues.

Governments are asked whether they have policies, not the effectiveness of these policies 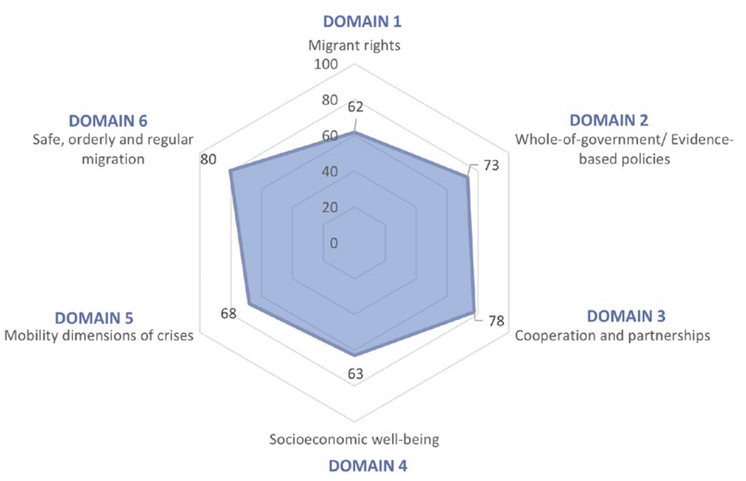 Central and Southern Asian countries were most likely to report that their policies fully meet criteria for orderly, safe, regular and responsible migration 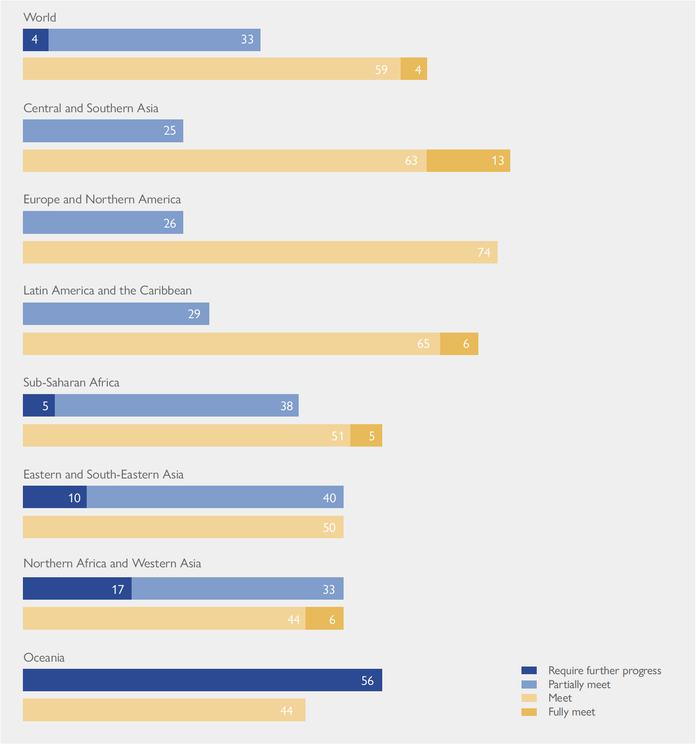 Perspective. There is widespread agreement that the SDG goals and targets will not be achieved by 2030. The International Migration Review Forum in May 2022 allowed governments to review progress to achieve the migration-related SDG goals.

Governments and NGOs highlighted the importance of migrants as essential workers, especially in food and health care systems, and noted that remittances to developing countries were almost $600 billion in 2021 despite closed borders and lockdowns. The ILO called for tripartite dialogues between governments, employers, and labor organizations to ratify and implement ILO conventions in order to ensure that migrants moved under the terms of rights-based and gender-responsive migration policies that guarantee equal rights to migrant workers.

Migration from less to more developed countries averaged almost three million a year between 2015 and 2020. Much of the IMRF discussion focused on the problems of migrants, decrying the paucity of legal pathways for migrants who are seeking safety and opportunity and calling on governments to do more to combat discrimination and xenophobia against the migrants inside their borders.

Advocates called for integrating migrants into the communities where they live regardless of legal status, opening more pathways for legal migration, and reducing migrant vulnerabilities. The concluding review asserted that governments “will strengthen our efforts to enhance and diversify the availability of pathways for safe, orderly and regular migration, including in response to demographic and labor market realities.”